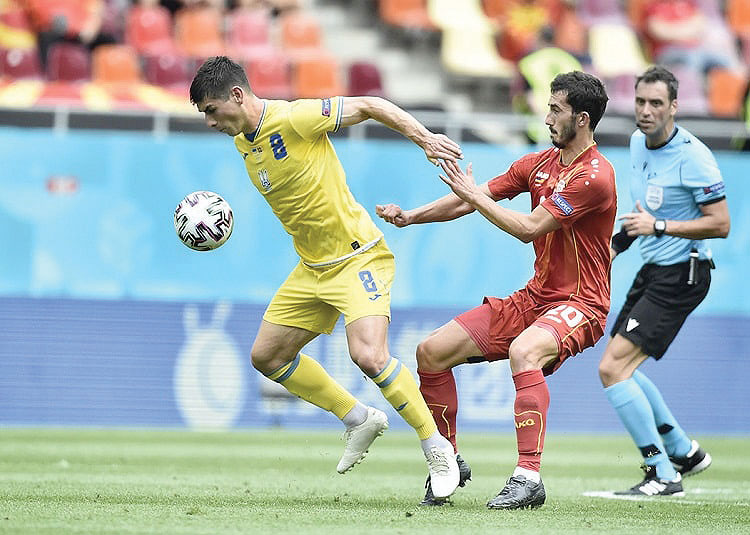 Ukraine defeats North Macedonia 2-1
Ukraine carried over a more intense focus and strong momentum that they showed in the last twenty minutes of play against the Netherlands into their second Euro 2020 match versus North Macedonia on June 17 in Bucharest. In many ways this match was a polar opposite of their first one, the 3-2 loss to the Dutch. Against the Macedonians, the Ukrainians jumped out to a 2-0 lead on goals again by Andriy Yarmolenko and Roman Yaremchuk then hung on in the second half plus stoppage time for a 2-1 victory.

Yarmolenko opened the scoring in the 29th minute when Oleksandr Karavayev worked the ball over to him following a corner kick, creating an easy finish inside the six-yard box. A mere five minutes later, Yarmolenko’s first-time pass allowed Yaremchuk to double his team’s advantage when a shot from the right of the box found the bottom, opposite corner.

North Macedonia made a game of it when Goran Pandev’s chip shot seemed to bring the underdogs back within one, only to be called offside in the 39th minute. North Macedonia finally scored in the 57th minute via a penalty kick when Ezgjan Alioski’s initial attempt was saved by Heorhiy Bushchan, only to have the rebound come right back to Alioski, who fired it into the back of the net. 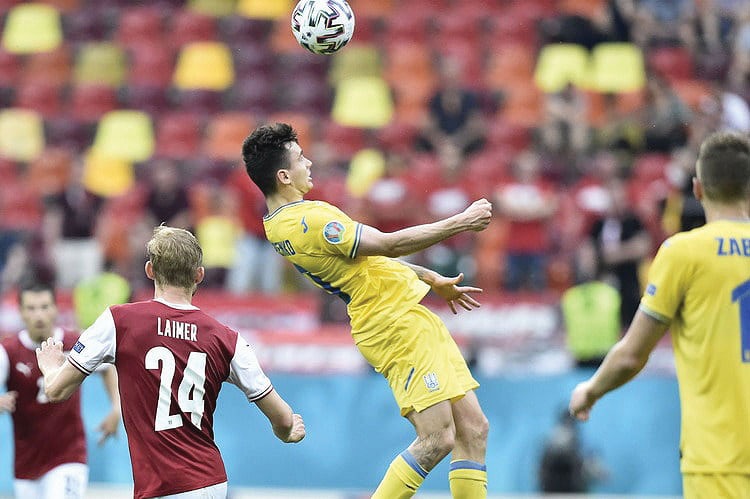 Mykola Shaparenko heads the ball against Austria on June 21 in Bucharest.

A questionable officiating call in the 84th minute almost put the game away for the blue-and-yellow, when referee Fernando Rapallini awarded Ukraine a penalty kick, deeming that Daniel Avramovski committed a handball as he jumped and protected his face while defending a free kick. Ruslan Malinovskyi’s penalty shot was saved by Stole Dimitrievski, restoring justice to the match.

North Macedonia could not tally the equalizer, and Ukraine earned three points with their win, placing them in a position to potentially advance out of the first round of play. The victory ended Ukraine’s six-match losing streak in Euro competition.

Ukraine loses 1-0 to Austria
Austria’s Christoph Baumgartner scored the only goal in their 1-0 victory over Ukraine in the Euro 2020 soccer championship final Group C match on June 21 in Bucharest, Romania. The goal came off a corner kick in the 21st minute of action. The loss dropped Ukraine to third place in its group, but the yellow and blue nonetheless qualified for the round of 16 as one of the top four third-place teams.

Ukraine started strong, but was sloppy in possession with many misplaced passes and rarely threatened in the second half. Andriy Shevchenko’s squad came close to an equalizer when Mykola Shaparenko’s shot drew a good save from Austrian goalkeeper Daniel Bachmann, the rebound barely eluding a lunging Andriy Yarmo­lenko, who had scored in each of the first two group games. Austria nearly handed Ukraine a way back into the match when Stefan Lainer headed Viktor Tsyhankov’s free kick toward his own goal, but Bach­mann reacted well to preserve Austria’s win. 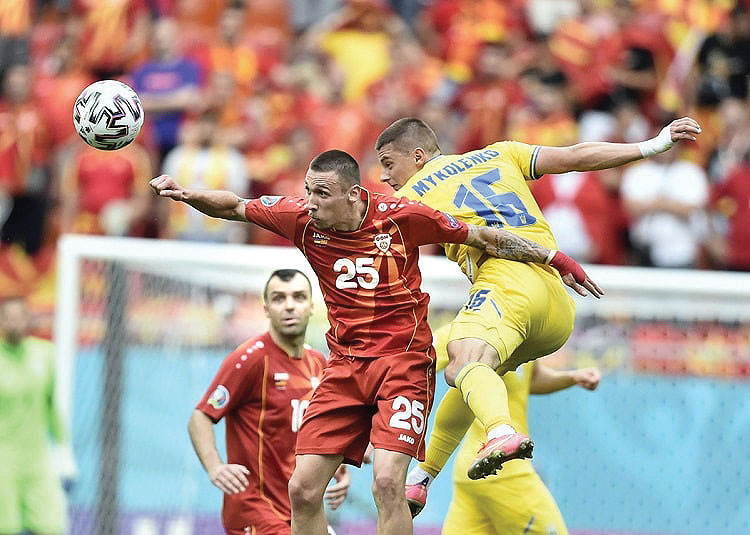 Vitaliy Mykolenko fights for the ball with Darko Churlinov of North Macedonia on June 17 in Bucharest.

Ukraine seemed to lack energy, focus and passion for a team which finished atop their qualifying pool, where they picked up 20 points from their eight matches, three more than powerhouse Portugal. They showed little to no tenacity against a more workmanlike opponent. A consistent lack of accuracy with their passing continued to hamper their side, with their only distant threats coming from occasional set-piece chances.

As the final minutes of the match ticked away, Ukraine never seriously looked like they were intent on getting a lone goal which would have landed them in second place and secured a trip to the knockout stage. Their third-place finish put them in a position of hoping that they could qualify for the knockout stage based on results from the rest of the matches from group play. Prior to the game against Austria, Ukraine controlled its own destiny. Following the 1-0 defeat, however, Ukraine’s destiny was left in the hands of other teams. The results from later games ultimately worked in Ukraine’s favor, and the blue-and-yellow booked passage to the round of 16 and will play Sweden at 3 p.m. on June 29.