KYIV – Ukraine’s historical Orthodox mother church, the Ecumenical Patriarchate of Constantinople, has started deliberation on whether to grant Ukraine its own self-governing church known as autocephaly.

In a communiqué e-mailed to The Ukrainian Weekly on April 22, the Ecumenical Patriarchate of Constantinople said “as its [Ukraine’s] true Mother Church,” that it has “decided to closely communicate and coordinate with its sister Orthodox Churches concerning this matter.”

A synod gathering of 12 Metropolitans is scheduled in late May and will consider church self-governance for Ukraine.

The note followed endorsements for church self-governance that the Turkish-based patriarchate received from two of the three Orthodox churches in Ukraine and the Verkhovna Rada earlier this month.

The Ukrainian branch of the Russian Orthodox Church, Ukrainian Orthodox Church-Moscow Patriarchate (UOC-MP) didn’t support the initiative that President Petro Poroshenko pushed through after an all-day meeting with Patriarch Bartholomew during a visit to Turkey on April 9.

Mr. Poroshenko described autocephaly as righting the past and the country’s “spiritual” independence from Moscow during an April 24 television appearance on ICTV channel, referring to when Moscow annexed Kyiv’s Metropolia in 1686. 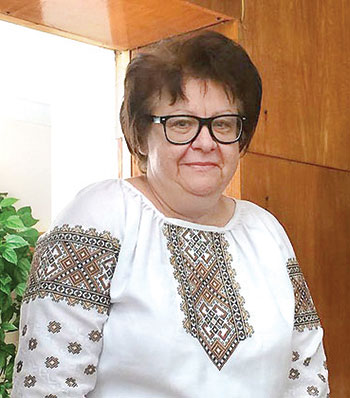 Lyudmyla Fylypovych, a religious scholar at the National Academy of Sciences’ Hryhorii Skovoroda Institute of Philosophy.

“We are simply returning to historical justice,” he said, stating that Ukraine this year will celebrate 1030 years since the Kyivan-Rus feudal state adopted Christianity. “I would like to emphasize that there was no Russian Orthodox Church back then. If the Constantinople church is the mother church of Ukraine, then the Ukrainian church is the mother church of Russia. And the mother cannot ask for independence from her daughter.”

Mr. Poroshenko added that the UOC-MP should also be included with the creation of a unified Orthodox church in Ukraine.

“This is the only way to rid itself at least of some of the anger and sins committed by the Russian military, Russian propagandists, and sometimes, unfortunately, Russian priests on the territory of Ukraine,” he said.

In turn, spokespersons for the UOC-MP have dismissed Mr. Poroshenko’s efforts as shortsighted fancies, as a political stunt ahead of next year’s parliamentary and presidential elections and as a ploy to distract the public from more pressing problems facing the nation.

UOC-MP spokesperson Archbishop Klyment (Oleh Vecherya) said the push for autocephaly “like all previous attempts are either attention distractors of urgent problems that the Verkhovna Rada couldn’t resolve to this day or part of a pre-election campaign stunt.”

He predicted Kyiv’s attempt at church self-governance will fail. “At present, to expect that [Patriarch] Bartholomew of Constantinople will change the position he has held over the last 25 years [of Ukraine’s independence] is naïve at the very least,” the archbishop said.

Another UOC-MP spokesperson, Archpriest Mykola Danylevych, said that talks to unite Ukraine’s Orthodox Churches should start with the Moscow Patriarchate and not with its “separatist parts,” referring to the Ukrainian Orthodox Church-Kyiv Patriarchate (UOC-KP), which is not canonically recognized.

Excluding Moscow, Kyiv has the backing of the American branch of the Ukrainian Orthodox Church.

Ukraine has the support of the majority of Holy Synod members, religious scholar Oleksandr Sagan said.

He noted that even those who are against autocephaly must sign Synod decisions and that they are irreversible. Thus, Ukraine would need seven positive votes among the 12 clergymen who make up the Synod, according to the religious scholar, adding that the next meeting should take place by May 31.

Ukraine’s most recent effort to gain autocephaly means that it is in a “final state of self-identification” as a nation, said Lyudmyla Fylypovych, a religious scholar at the National Academy of Sciences’ Hryhorii Skovoroda Institute of Philosophy. “We are not appealing for the first time to Bartholomew with a request for autocephaly – he looked at us, and realized that perhaps 10 years ago we were not ready, now we are absolutely ready.”

Two nationwide surveys on religion conducted in 2017 and this year by the Kyiv-based Razumkov Center policy center show that there are twice as many people who identify with the Kyiv Patriarchate than with UOC-MP.

The most recent survey carried out in March and released on April 26 showed that 27 percent of respondents identify with the UOC-KP whereas 13 percent with the Moscow Patriarchate.

An additional 9 percent identify with the Greek-Catholic Church, which observes eastern rite traditions and follows the Gregorian Calendar for Easter and Christmas holidays.

However, this time a number of factors, both internal and external are in Kyiv’s favor, according to religious scholar Ms. Fylypovych.

In-country, the UOC-MP’s “gravitas has dwindled,” she said, adding that should autocephaly be granted, “up to 3,000-4,000 Moscow Patriarchate communities may join the new unified Orthodox church.”

Russia’s actions since the Euro-Maidan Revolution and the subsequent war instigated by Moscow have acted as a “catalyst for changes in the actual status of this church.”