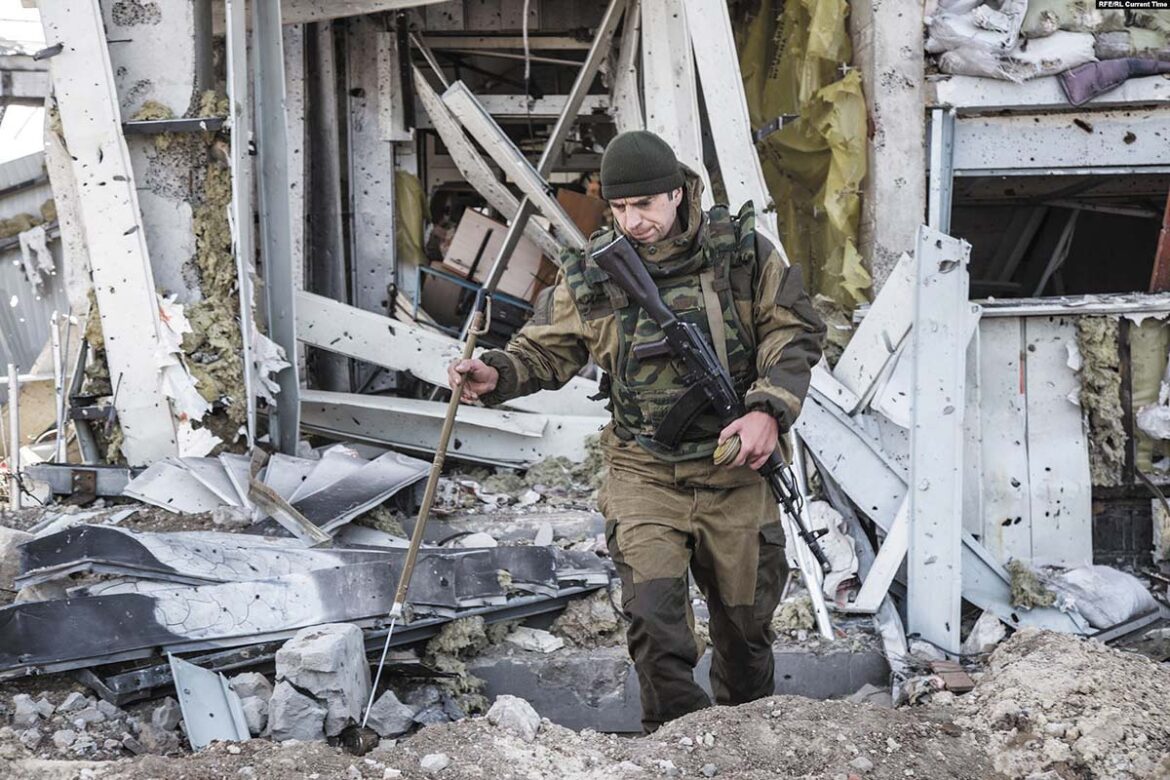 A Ukrainian soldier searching for dead bodies at the Donetsk airport in October 2015.

Known as the second battle of the now-destroyed airport – named after Russian composer Sergei Prokofiev – the siege lasted 242 days from May 26, 2014, to January 20, 2015.

Despite dogged efforts to defend the strategic site’s two terminals, including the Ukrainian air traffic control tower atop which steadfastly stood a Ukrainian flag, the airport soon became a symbol of Ukraine’s struggle to defend itself amid Russia’s unprovoked aggression.

Ukraine’s military says that 101 of their own soldiers were killed and 440 wounded while defending the airport, which was given an estimated $860 million facelift ahead of the European soccer championship that Ukraine co-hosted with Poland in 2012. Nine Ukrainian combatants are still missing.

The stoic fortitude with which the airport’s defenders repelled the enemy’s increasing onslaughts of infantry, armor and artillery fire has become legend. The enemy’s moniker of calling the airport’s defenders “cyborgs” soon spread through social media and a movie was made in their memory. Natalya Vorozhbyt, perhaps Ukraine’s best-known playwright, penned the screenplay for the film in 2017. 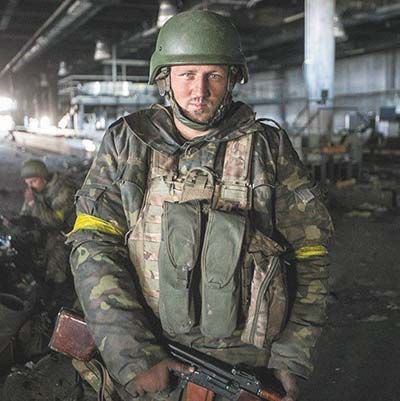 Former Ukrainian machine gunner Oleksiy Matlak of the 74th Separate Reconnaissance Battalion of the Armed Forces at the Donetsk Airport in October 2014.

Asked if he deserves to be called a “cyborg,” Oleksiy Matlak, who spent 11 days in October 2014 as a machine gunner with the military’s 74th reconnaissance battalion, told The Ukrainian Weekly that he considered “anyone who has defended the country from foreign aggressors as honorable.”

Mr. Matlak’s time spent defending the airport coincided with a period when it was under constant onslaught, though it was also a point when Ukrainian forces still held both terminals and the control tower.

Fighting “was difficult,” Mr. Matlak recalled, who at the time served as a conscript. The former Euro-Maidan protester also served separately as a contract officer after completing officer training school for two years.  He was then discharged from the military in 2019.

Mr. Matlak said his stint at the hotspot was just “a small contribution” to the airport’s defense, adding that what the government could do best to honor war veterans is “create new programs for them and their family members to ensure a better life and security.”

The first battle for the airport, located 5 kilometers northwest of occupied Donetsk city, lasted one day on May 26, 2014. It was “a short, relatively one-sided affair,” ending with a deft victory by Ukrainian forces who were able to hold the airport, wrote Maj. Amos C. Fox of the U.S. army in a report published in May 2019 for the Institute of Land Warfare.

An assortment of foreign and local fighters, including Chechens from Russia who were known as the Vostok Battalion, had previously seized key facilities of the airport. In one day, Ukraine completed a combined air-and-land offensive to successfully retake the airport, ending with more than 50 dead enemy fighters. Kyiv reported no casualties during the one-day offensive.

Thence started the second battle, which was part of Russia’s bigger and more pronounced counteroffensive to stave off Ukraine’s efforts to retake towns and cities that had been occupied by both covert and uniformed invading forces.  Those troops were made up of regular and irregular Russian forces, as well as local collaborationists.

As Ukraine retook the key cities of Slovyansk, Kramatorsk, Mariupol and Avdiyivka in the Donetsk Oblast, as well other settlements in Luhansk Oblast that spring, Russia began to more “blatantly support its proxies,” Mr. Fox wrote.

That year, Russian forces also took over the Luhansk airport in its overt, spearheaded attack that coincided with reinforcing irregular forces at Ilovaisk in Donetsk Oblast.

This Russian support included cross-border shelling of Ukrainian positions and the deployment of regular “battalion tactical groups…that swelled up to as high as 6,500” people that summer, ending in Kyiv’s disastrous defeat at the Battle of Ilovaisk, a strategic railroad hub.

The loss forced then-President Petro Poroshenko to negotiate a peace agreement that culminated in the first so-called Minsk ceasefire which was brokered by the leaders of France and Germany with Russian President Vladimir Putin in attendance.

Despite the negotiated ceasefire, the battle for the Donetsk airport raged and Russian forces gradually took over key positions in what Mr. Fox described as their strategy to “exhaust the Ukrainians through a slow, attritional siege.”

Mr. Fox wrote that the “goal of destroying the airport was twofold: it centralized its Ukrainian defenders, and it devalued the facility’s future use.”

By December 5, 2014, Ukrainian forces started to lose their grip of the area.

Kyiv’s forces eventually lost control of the old terminal and defenses fell back to the new terminal that was built in 2012. Rotating reinforcements were constantly shelled entering the airport from the northwest town of Pisky, which led to more casualties.

Then, on January 10, 2015, a three-day attack commenced upon the air traffic control tower and new terminal. Still standing, albeit damaged and without a Ukrainian flag on top, the tower collapsed on January 12, 2015. 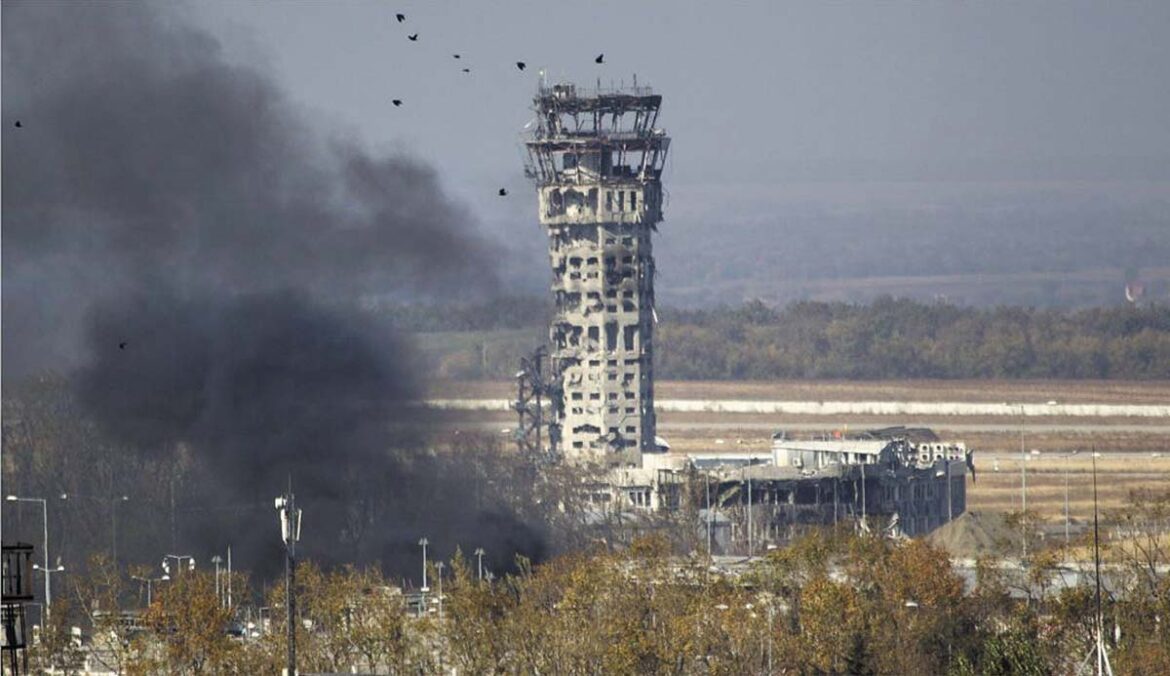 The Donetsk airport control tower sustained massive damage throughout the war. It was totally destroyed and collapsed in January 2015.

Five days later Ukrainian forces launched a desperate assault that at once served as a “counterattack…and rescue mission” for the remaining soldiers at the airport, Mr. Fox wrote. On January 19, 2015, Russia deployed 600 soldiers with two battalion tactical groups and special operations forces along with modern T-90 tanks to dispatch the remaining Ukrainian fighters still holding what was left of their damaged positions, he wrote.

Two days later the Ukrainian positions were overrun, with “more than 50 [Ukrainian soldiers] being killed or injured in the final days of the airport’s defense. Prisoners were also taken.

This offensive, which ended with the Ukrainian defeat at the Battle of Debaltseve, concluded on February 20, 2015, and “was politically decisive, as it resulted in the Minsk II agreement,” Mr. Fox wrote of the last official truce before the war made the transition to trench warfare consisting of sporadic artillery and sniper fire along an approximate 250-mile frontline.  To date, more than 14,000 people have been killed and an additional 1 million have been displaced since the war began, according to data provided by the United Nations.