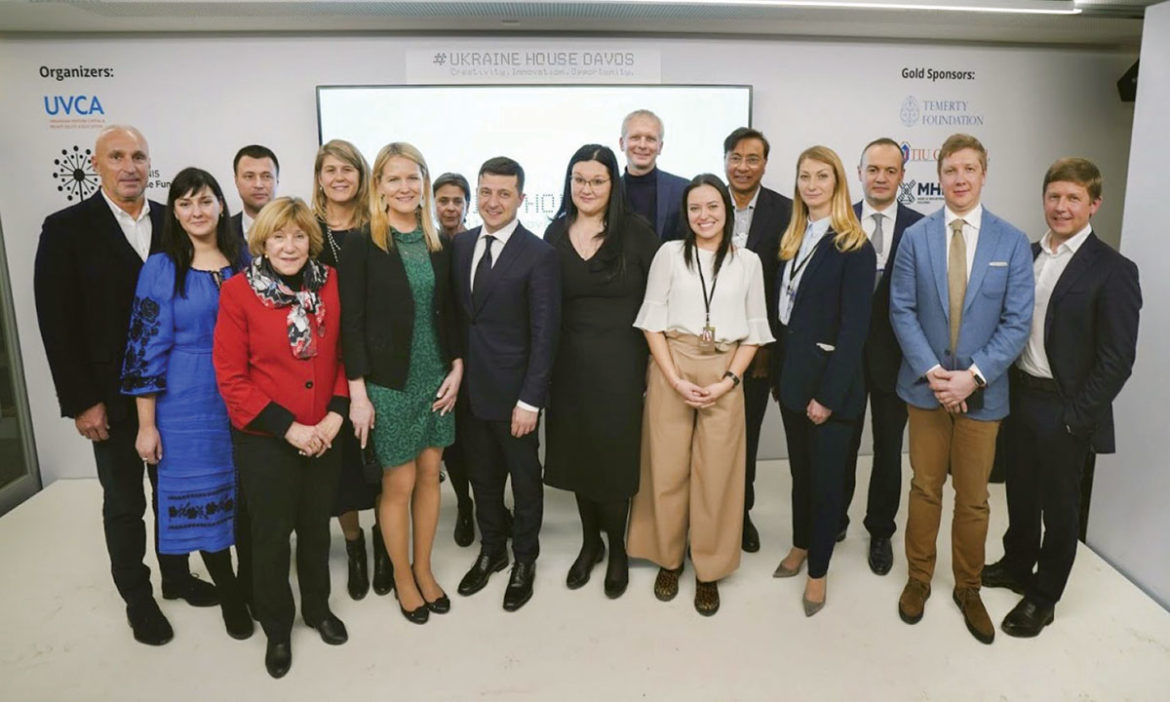 DAVOS, Switzerland – On January 21-24, this small Swiss town in the mountains hosted the 50th annual World Economic Forum. The world’s most influential people, politicians, businesspeople and philanthropists flew into Switzer­land to join this elite gathering.

Alongside the official invitation-only program, Davos’s main promenade hosts dozens of alternative events set up by corporations, global organizations and countries. Ukraine House Davos was one of these for the third consecutive year; its aim was to promote Ukraine as a young and vibrant democracy in the heart of Europe that is undergoing a massive transformation and is led by a resilient, highly educated and innovative new generation.

Ukraine House strengthened the image of Ukraine as a modern European country with attractive investment opportunities. The venue hosted captivating panel discussions on investment, infrastructure, IT, and education, as well as evening receptions and cultural diplomacy events. The House was a hive of activity throughout the week and attracted an influential international audience, becoming one of the favorite spots for the Davos crowd. 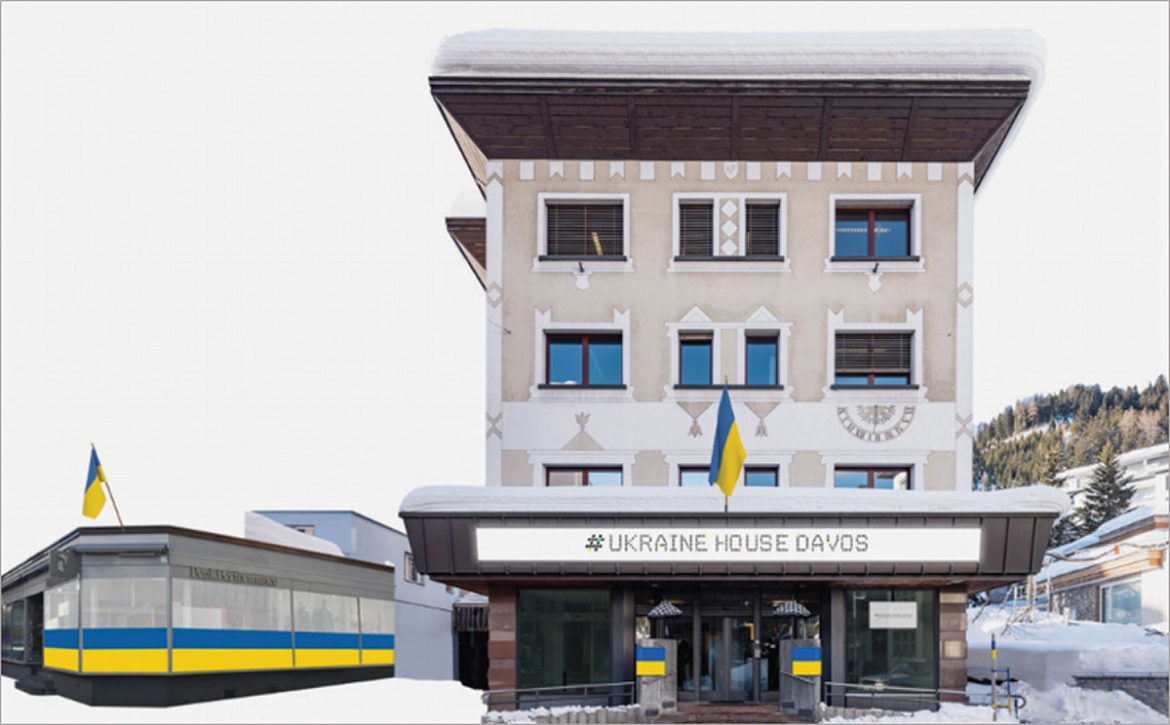 Ukraine House Davos opened its doors during the World Economic Forum for the third time.

President Volodymyr Zelenskyy of Ukraine visited Ukraine House Davos on January 22 to congratulate organizers on the success of this year’s event. Also that day, Mr. Zelenskyy was supposed to lead a closed meeting of the National Investment Council of Ukraine. Ultimately, he did not manage to get to Ukraine House in time, so Ukraine’s Prime Minister Oleksiy Honcharuk headed the meeting instead.

Ukraine’s Ministry of Infrastructure and Deutsche Bahn, Germany’s largest railway operator, signed a memorandum of understanding on the cooperation and development of Ukrainian Railways (Ukrzalizny­tsia) at the meeting.

“Deutsche Bahn is Germany’s largest railway operator. This contract is not about concessions; it is a strategic partnership aimed to develop Ukraine’s infrastructure,” said Mr. Honcharuk. “I believe that German operational efficiency and zero tolerance for corruption will inspire changes in Ukrzaliznytsia. Ukraine retains full control over Ukrzaliznytsia – German experts will focus on reforming the enterprise management mechanisms.”

Also attending the National Investment Council meeting was Suma Chakrabarti, president of the European Bank for Reconstruction and Development, who said the “EBRD remains the largest single investor in Ukraine and 2019 was a standout year. We have doubled the scale of investments with over 1 billion euros invested during the year, two-thirds of which has been in the green economy. The new government has the mandate to implement genuine reforms, especially concession laws, as well as legislative and taxation procedures.”

The president and CEO of the Western NIS Enterprise Fund, Jaroslawa Johnson, said that “this time the Ukrainian House included two venues – one public for discussions and evening receptions, where the meeting of the National Council was held, and the second for bilateral and other meetings, which was used by President Zelenskyy and Prime Minister Oleksiy Honcharuk.”

The meetings that took place at the World Economic Forum in Davos demonstrated that Ukraine enjoys investors’ support, President Zelenskyy emphasized, according to the official website of the Presidential Office. “We enjoy this support. We are treated very differently; we are trusted. It is necessary to open up Ukraine, to dismiss such words as ‘corruption,’ ‘outdated,’ references to old business groups or political influence,” the president said in a comment to the media.

Mr. Zelenskyy noted that he had held important meetings in the framework of the World Economic Forum. “This is not the first time I invite investors. We prepare programs for them. These are not just words,” he emphasized. Mr. Zelenskyy also stressed the importance of Ukraine House Davos. “It seems to me that it should be expanded, we must distinguish ourselves. If you want them to come to you, you should talk to investors constantly,” the President commented.

According to Lenna Koszarny, founding partner and CEO of Horizon Capital, this year, the interest in Ukraine at the World Economic Forum had significantly grown, which was confirmed by the fact that the Ukrainian president’s speech was in the main program of the forum for the second time in history. (President Viktor Yushchenko’s speech in 2005 was the first.) “If earlier we used to run after investors, now they themselves are interested in Ukraine,” she pointed out.

During the 94 hours Ukraine House Davos functioned, 16 discussions were held with speakers from 12 countries, and the total number of guests, taking into account evening receptions and events of cultural diplomacy, exceeded 8,000 people. Also, online broadcasts from the Ukraine House on social networks garnered almost 400,000 views on Facebook.

“The area of our multi-format space this year was 10 times larger than the first year of the Ukrainian House in Davos, which allowed us to host the largest number of guests today. Moreover, new potential sponsors have already shown their interest in participating in projects,” said Svitlana Hrytsenko of the Victor Pinchuk Foundation during a press conference at the Interfax-Ukraine agency on January 28. “We managed to enlist the support of 13 sponsors – which is more than ever before,” added Ms. Hrytsenko.

For the final installment of the weeklong event, Ukraine House hosted a panel to showcase the success stories of Ukraine’s next generation of leaders and entrepreneurs. Titled “Young Generation Changes Ukraine: Stories of New Ukraine,” the event was sponsored by the Bohdan Hawrylyshyn Family Foundation (BHFF) with Christine Hawrylyshyn-Batruch, senior strategic advisor to Lundin Petroleum, as moderator. Among participants were young Ukrainians who are making changes in the political, economic, public and media spheres: Uliana Avtonomova, coordinator of EO Business Incubator; Solomiia Bobrovska, national deputy of the Verkhovna Rada, deputy head of the Ukrainian delegation to the NATO Parliamentary Assembly; Taras Prokopy­shyn, co-founder and CEO at The Ukrainians Media; and Roman Tymotsko, Ukrainian youth delegate to the United Nations 2019-2020. They are united by the fact that they are all graduates of programs initiated by the late Dr. Hawrylyshyn, who co-founded the World Economic Forum in Davos.

“Yes, there is a war in our country. Yet, we are a democracy. It seems to me that there are very few countries in the world that can proudly say: Despite all the challenges, we are active, we are dynamic. We have dedicated youth. I think a bright future awaits us. And we will win because we are stable and we have a transition. The next generation is quickly picking up on the essential qualities of what it really means to be Ukrainian,” said Ms. Hawrylyshyn-Batruch, president of the Bohdan Hawrylyshyn Family Foundation.

Ukraine House Davos, whose area for 2020 was increased to 300 square meters, as compared with 200 square meters a year ago, plans a further expansion for the next year. The organizers confirmed an increase in the budget for Ukraine House Davos, without mentioning an amount. One of the ideas for next year, according to organizers, is to more actively involve representatives of the government and other authorities who could work immediately with potential investors on the spot at Ukraine House.