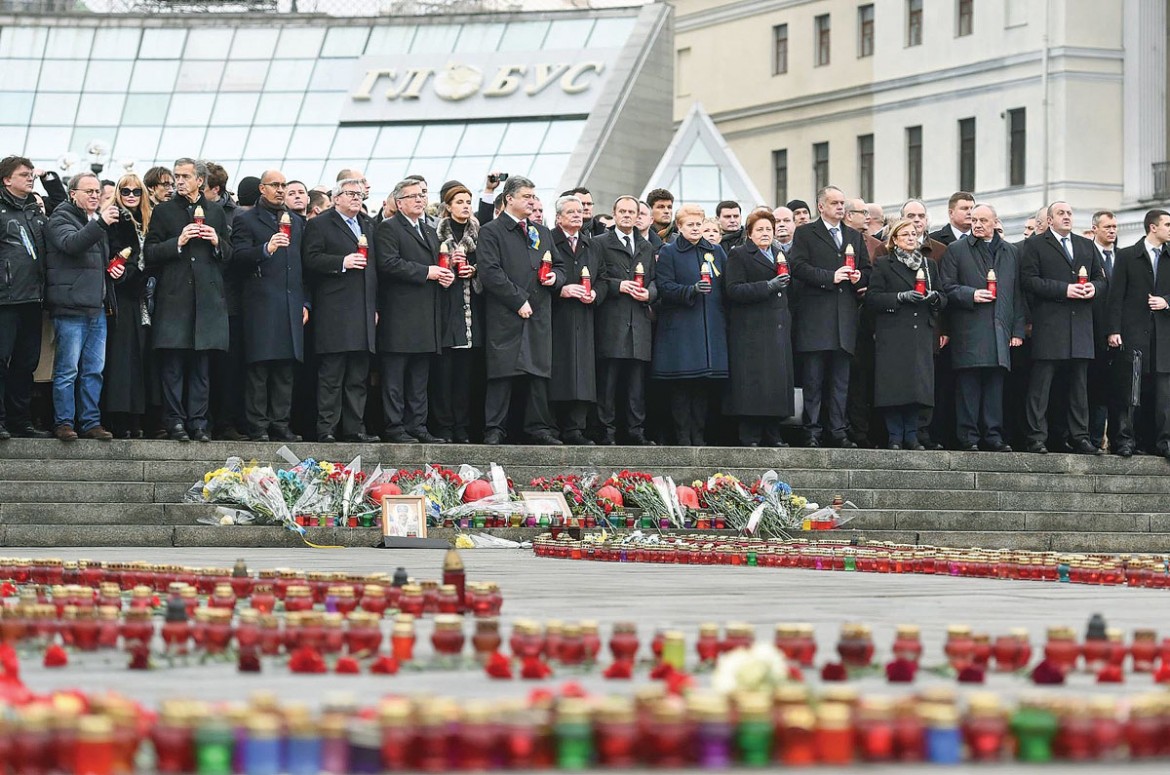 Foreign leaders join with Ukraine’s president on February 22 in the city center of Kyiv to remember the fallen on the first anniversary of the Revolution of Dignity.

KYIV – Commemorations were held in Kyiv on February 20 to honor the victims of deadly clashes between protesters of the Euro-Maidan movement and the security forces of the Yanukovych administration one year ago. The violence killed more than 100 people, including 17 security officers, between February 18 and 21, 2014.

The revolt led to the ouster of President Viktor Yanukovych, who ultimately fled to Russia. His elected successor, President Petro Poroshenko, designated February 20, the day most of the victims lost their lives, as an official day of remembrance.

Church bells rang across the country and a minute of silence was held.

Hundreds of people marched in Kyiv to honor their memory, and mourners laid flowers and candles at sites where protesters were shot dead.

President Poroshenko addressed the nation later in the day from Independence Square, promising to “do the maximum I can, so those huge loses our people suffered during the past year won’t be wasted. We will stop the war and within the few years everyone will notice how Ukraine is changing.”

“As the president, I feel a tremendous responsibility to the heroes of the Heavenly Hundred, to your children and parents, brothers and sisters. They died for Ukraine to become a truly independent, powerful and successful European state. This great dream, this national idea is already coming true,” Mr. Poroshenko assured his listeners.

A concert on the Kyiv’s central square wrapped up the commemorations, with poetry readings and a choir singing the national anthem. Beams of light placed at the spots where Euro-Maidan activists were killed pointed up into the night sky in an illuminated memorial.

On Sunday, February 22, thousands participated in a peace march in Kyiv to commemorate the Euro-Maidan.

Many foreign leaders, including Presidents Dalia Grybauskaite of Lithuania, Bronislaw Komorowski of Poland, Joachim Gauck of Germany, Nicolae Timofti of Moldova, Giorgi Margvelashvili of Georgia and Andrej Kiska of Slovakia, as well as European Council President Donald Tusk, attended a separate memorial event in Kyiv on February 22. Ministers of many other countries were also present.

They participated in what was billed as a March of Dignity down the Kyiv streets where Ukrainians had fought a year ago, walking arm in arm. A huge Ukrainian flag was carried by the crowd. The march ended with a prayer for peace at Independence Square.

In Kharkiv, where a similar peace march was held that day, an explosive device filled with shrapnel was thrown into the crowd. Two people, a civilian and a policeman, were killed; two more, a 15-year-old boy and an 18-year-old student, died later in the hospital of injuries sustained in the attack.

RFE/RL’s Ukrainian Service reported that in the city of Sumy in northeastern Ukraine protesters gathered on February 22 to burn an effigy of Russian President Vladimir Putin.

Meanwhile, in Moscow on February 21, thousands of Russians marched to mark the first anniversary of what they view as a “coup” in Ukraine. According to RFE/RL’s Russian Service, participants in the march carried flags with the face of Vladimir Putin and Chechen leader Ramzan Kadyrov, and posters with anti-U.S. and pro-Kremlin slogans.

In related news, the head of the Security Service of Ukraine (SBU) accused a Russian presidential aide of supervising a commando of Russian snipers believed to have targeted Euro-Maidan demonstrators.

Sources: RFE/RL, with reporting by Interfax and TASS; Ukraine Today; the official website of the president of Ukraine.