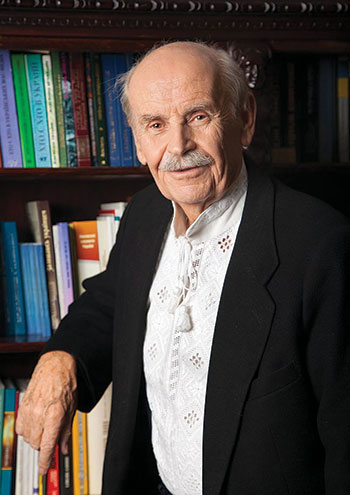 KYIV – Everything that Bohdan Hawrylyshyn did in life “started with a dream,” he liked to say. He always stayed true to his Ukrainian roots and followed a simple credo. “Learn. Dream. Work with joy. Love people. Love life,” he wrote on his eponymous charity foundation’s website that he founded in 2009 to send Ukrainians on trips to study how other countries are run and have transformed.

Five days after his 90th birthday at 5:15 a.m. on October 24, however, the renowned economist died calmly sleeping in Kyiv leaving his wife, three children and seven grandchildren.

World War II uprooted him in 1944 from the village of Koropets in Ternopil Oblast. After spending two years in a displaced persons camp, he moved to Canada where his first job was to work as a lumberjack.

He also joined the Plast Ukrainian Scouting Organization becoming a lifelong devoted member and started practicing speaking English on a daily basis. In 1954 he graduated from the University of Toronto in mechanical engineering and received an MBA from the International Management Institute in Geneva four years later, according to the World Academy of Art and Science’s website. In 1988 he would help found the same educational institution in Soviet Ukraine becoming the first institution in the former USSR to offer an MBA program.

He remained in Switzerland and for eight years taught at his alma mater on such subjects as economics, global business environment and public administration. In 1968 Mr. Hawrylyshyn became director of the same institute and remained its head for 18 years.

Mr. Hawlyshyn would eventually publish more than 100 academic articles in management, and economic and political environment. He authored two books.

According to his charity foundation’s website, “The road map to the future — to the most efficient society” has won international recognition and has been published in eight languages.

In 2011 he published “Staying Ukrainian.” “It’s not just a territory,” he said in an interview with the Kyiv Post on January 27. “Whatever I did, I did as a Ukrainian, not only as Hawrylyshyn.” But he would never sign his books unless one read them.

Mr. Hawrylyshyn also consulted governments of various countries and multinational companies like General Electric, IBM and Phillips. Having helped found the World Economic Forum in Davos, he was integral in establishing billionaire George Soros’ International Renaissance Foundation in Ukraine, chairing it in 1991-1998.

Believing in the potential of the nation’s youth to change Ukraine, he founded a charity foundation in 2009 to send people aged 20-35 on study trips to Austria, Switzerland, Norway, Germany and Sweden. Ukraine “needs total transformation” and it’s going to be a challenge for the younger generation, he told the Kyiv Post in 2013. “Many young people want to improve the situation in Ukraine, but they don’t know where to start.” The charity has since sent over 500 young people abroad as part of the group’s youth development program.

A wake was scheduled for October 28 at the International Management Institute in Kyiv and will be followed by church procession. Mr. Hawrylyshyn will be cremated with some of the ashes being scattered over his mother’s grave in Koropets.