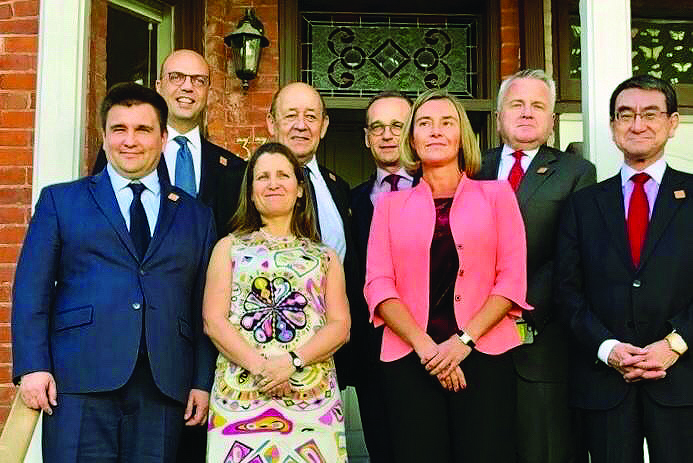 OTTAWA – While the Group of Seven (G-7) foreign ministers presented a united front against Russia in their recent two-day meetings at the University of Toronto (U of T), they could have gone even further in condemning the “threat to democracy” posed by the country, according to the founder and director of the G-7 Research Group at the Munk School of Global Affairs at the university.

John Kirton, a U of T political science professor who teaches courses on international relations and Canadian foreign policy, praised Canadian Foreign Affairs Minister Chrystia Freeland, a Ukrainian Canadian who previously worked as a journalist in both Kyiv and Moscow, for putting her ancestral homeland “front and centre” and “Russia as Global Threat Number One” on the agenda for the April 22-23 G-7 ministerial huddle.

“Chrystia Freeland, as host, invited the Ukrainian foreign minister [Pavlo Klimkin] to adjoin the ministers at the beginning of their meeting to give a firsthand account of the situation in Ukraine and its broader implications,” said Prof. Kirton.

“He emphasized that the threat Ukraine was facing may have been the most acute form from Russia that is affecting so many other countries in so many different ways – from the direct annexation of territory through to fake-news interference in the electoral process.”

By comparison, Prof. Kirton said that the 2017 G-7 foreign ministers’ meeting, held in Lucca, Italy, focused on terrorism and counterterrorism.

Mr. Klimkin, who with other foreign ministers attended Sunday brunch at Ms. Freeland’s Toronto home during his visit, told The Canadian Press (CP) that “Ukraine is perceived by many and also by Russia as a sort of test range for testing Russian nonconventional warfare – hybrid war,” which he said was part of a broader attack “against the democratic transatlantic community.”

“Fighting along with Ukraine would give an immense asset to the whole democratic community in the sense of understanding Russian efforts to destabilize the western world,” he said in an interview with CP reporter Mike Blanchfield.

The 61-point communiqué from this year’s meeting in Toronto includes two sections – under the heading “rules-based international order” – on Ukraine, which reiterated the support from Canada, France, Germany, Italy, Japan, the United Kingdom and the United States, along with the European Union, for “Ukrainian sovereignty, independence and territorial integrity within its internationally recognized borders. This includes our non-recognition of Russia’s violation of Ukraine’s sovereignty and territorial integrity.”

The G-7 ministers decried “the degraded human rights situation” in the Crimean peninsula, “and the violations and abuses committed against its population by Russia in Crimea,” and “fully support the efforts within the Normandy format and of the Organization for Security and Cooperation in Europe (OSCE) for a solution to the conflict in eastern Ukraine.” (The Normandy format, also known as the Normandy contact group, is composed of senior government leaders from Ukraine, Russia, France and Germany to resolve the situation in eastern Ukraine.)

“We are convinced that the only way a sustainable solution to the conflict can be reached is through the full implementation of the Minsk agreements,” said the G-7 ministerial communiqué. “Given Russia’s responsibility in the conflict, we urge [it] to stabilize the security situation in the Donbas without delay.”

They noted that “the duration of Donbas-related economic sanctions is clearly linked to Russia’s complete and irreversible implementation of the Minsk agreements,” and that the sanctions “can be rolled back only if Russia truly fulfills its commitments, but we also stand ready to take further restrictive measures should Russia’s actions so require.”

The ministers also reconfirmed their support for “Ukraine’s reform” and they were “encouraged by steps taken to date, especially in the areas of decentralization and economic growth.”

“We urge the Government of Ukraine to make continued, clear progress along the reform path on which it has embarked and which its people demand,” they said, adding that includes the creation of an anti-corruption court as recommended by the Council of Europe’s Commission for Democracy Through Law (Venice Commission), as well as the progress Ukraine had made on electoral reform and its national security law currently being debated before the Verkhovna Rada.

The communiqué also reiterated ministerial “confidence” in the G-7 Ambassadors’ Support Group for Ukraine, established three years ago, and “acknowledge[d] the role of this group in monitoring and supporting the implementation of reforms.”

However, Prof. Kirton said that “Ukraine may have deserved more than two paragraphs,” including a nod to gender-equality, to be highlighted when G-7 leaders meet in Charlevoix, Quebec, in June, “if only a shout-out to the contribution which the women in Ukraine are making to that country in terms of security and stability.”

He added that the G-7 ministers could have also included a reference to Ukraine’s initiatives regarding climate change, through both its move to eliminate fossil-fuel subsidies and its transition toward renewable energies, making the country less dependent on Russian gas and therefore, “enhancing energy and ecological security at the same time.”

He also hoped that the G-7 foreign ministers would have acknowledged the U.S. initiative to equip the Ukrainian Armed Forces with “more muscular and offensive weaponry – a step Canada has not yet taken.”

“It would have simply noted a fact, with the implicit message to Russia that more of this could be done by the Americans or other G-7 members,” he said in an interview, adding that issue could be raised at the 44th G-7 Summit scheduled for June 8-9.

“The latest round of U.S. sanctions against Russia are also doing immediate and serious economic damage to some critical sectors of its economy – particularly aluminum with Rusal, and may be enough to make Mr. Putin dramatically change his course right away without another military step.”

(On April 23, the U.S. Treasury Department announced that it would consider lifting sanctions against Russian aluminum giant Rusal Co. if Kremlin-tied oligarch Oleg Deripaska relinquished control of the company.)

Prof. Kirton said the G-7 Toronto ministerial communiqué’s references to sanctions against Russia are “important in the context of those who want to give Mr. Putin the benefit of the doubt,” such as the Russian-sympathetic, anti-establishment Five Star Movement (M5S) and the right-wing Lega party, which made gains last month in the Italian parliamentary election.

But Prof. Kirton said that unlike “some who roll their eyes and want to give up on Ukraine because it’s just too corrupt to be capable of reform,” the G-7 foreign ministers endorsed the measures the country is taking, which signals Ukraine is “moving in the right direction.”

Acting U.S. Secretary of State John Sullivan, who met with Minister Klimkin in Toronto, also had tough talk for Russia at the G7 meeting and said the ministers “stand united in [their] commitment to hold Russia accountable for its activities in Ukraine.”

At an April 23 news conference in Toronto, he told reporters that the G-7 calls on Russia “to honor its Minsk commitments, to de-escalate violence, and to return control of Crimea to Ukraine.”

“He’s been given so many opportunities to take an off-ramp,” he said. “The time has come for tough love, and that’s what is going to make him have a second thought.”