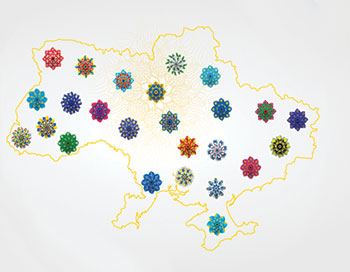 An interactive map, posted online, shows the location of celebratory events that will take place to mark the 30th anniversary of Ukraine’s renewed independence.

More than 150 nationwide events are planned, though most will bypass Prozorro

An interactive map, posted online, shows the location of celebratory events that will take place to mark the 30th anniversary of Ukraine’s renewed independence.

KYIV – Ukraine will hold more than 150 events nationwide to celebrate this year’s 30th Independence Day that will culminate on August 24. Worth millions of dollars in preparation, most of the work going into the organization of the events will bypass the nation’s much lauded Prozorro public procurement platform.

In total, “about 30 delegations of countries and international organizations are expected” to attend the celebrations, the presidential statement reads.

At a weekly forum held during the past week, President Volodymyr Zelenskyy said the holiday is “not just a big parade, a big concert [and] a big salute.”

“It is an opportunity to understand what we have learned over the years of independence and what we must learn to never lose it,” Mr. Zelenskyy said.

The military parade along Kyiv’s main thoroughfare of Khreshchatyk Street will feature more than 5,000 soldiers, 100 aircraft and 400 armored units, the Armed Forces of Ukraine said.

On August 22, the award “National Legend of Ukraine” will be given for the first time.
The award will be given to citizens who have “outstanding personal merits in the formation of an independent Ukraine,” or who have strengthened statehood, defended the fatherland and served the Ukrainian people, the presidential office said.

Award recipients will also include those who have made a significant contribution to the development of the national economy, science, education, culture, art, sports, healthcare, or who are active in charity and community activities.

The Culture Ministry also released an interactive map of all the Independence Day-related events taking place in each region. That map was released on a newly created website, which can be found at https://ukraine30.mkip.gov.ua/.

The celebrations will coincide with the national Flag Day on August 23, which will also include the newly launched Crimean Platform, an international diplomatic initiative designed to muster support to free Ukraine’s Crimean Peninsula from Russian occupation.

On that day, Ukraine’s blue-and-yellow flag will be raised in the geographical center of the country in Cherkasy Oblast with Mr. Zelenskyy in attendance. The flag will also adorn the facades of the parliamentary building, the National Opera house, the Palace of Ukraine, the Central Department Store on Khreshchatyk Street, as well as the Gulliver shopping center near the Palace of Sports in downtown Kyiv.

Ukraine’s parliament, the Verkhovna Rada, will hold a solemn session on Independence Day, according to speaker Dmytro Razumkov. It will commence at 1 p.m. on August 24.

However, many of the preparations worth millions of dollars are exempt from a competitive bidding process on the government’s Prozorro public procurement platform, said Oleksiy Shalaisky, chief editor of Nashi Hroshi, a watchdog that monitors government orders.

“This includes the renovation of the national conservatory in downtown Kyiv, a project worth some $10 million,” he told The Ukrainian Weekly.

In early June, parliament adopted laws allowing for Independence Day orders to bypass the public procurement platform. Mr. Zelenskyy signed the law in late June. The government has argued that, since it usually takes two months for a bidding process to be completed on Prozorro, a simplified tender procedure is necessary.

Daria Kaleniuk, executive director of graft watchdog Anticorruption Action Center, said that under the administration of Mr. Zelenskyy, the Prozorro platform has been slowly circumvented.

At its fifth anniversary this year, Prozorro head Vasyl Zadvornyy said the platform has saved taxpayers more than $7 billion by conducting transparent and competitive bids for public procurement projects.