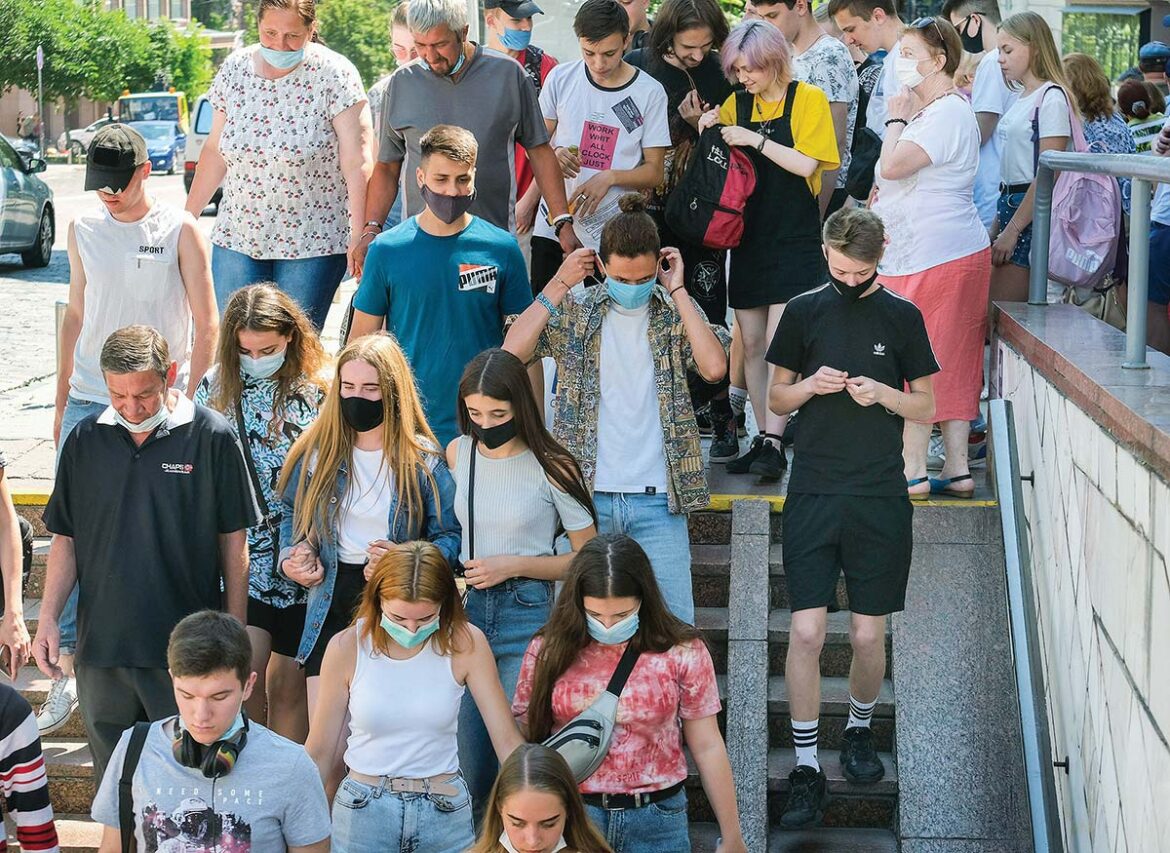 In this photo from late June, people in Kyiv, masked and unmasked, enter an underpass. As of August 17, Kyiv has been designated as being in the yellow epidemiological zone.

KYIV – As of August 12, there were 84,548 officially confirmed COVID-19 cases in Ukraine. Last week, the number of those infected set records four days in a row. Officially, the adaptive quarantine in Ukraine has been extended until August 31, however, the government does not plan to lift restrictions anytime soon.

The Cabinet of Ministers has developed a new system that classifies the country’s regions by zones – green, yellow, orange and red – based on the level of risk for coronavirus spread. Going from green to red, each zone has progressively higher quarantine restrictions.

The green zone is the safest and has the least restrictions. It envisages only the obligatory wearing of face masks in public buildings and limits the number of passengers on public transport to the seating capacity. Mass events are allowed, but with no more than one person per five square meters. Cinemas are permitted to work at 50 percent occupancy.

In the yellow zone, visits to nursing homes for the elderly are not allowed, except for those that provide services in critical situations. Restrictions of the green zone also apply.

Additional prohibitions in the orange zone do not allow the operation of establishments providing accommodations, such as hostels and tourist bases (hotels are allowed to function), and the nighttime operation of entertainment facilities and restaurants. Public events are restricted to one person per 20 square meters and no more than 100 people total.

The red zone has the most restrictions. The operation of public transport, visiting educational institutions and the business activities of shopping malls, cafes and restaurants are prohibited.

This epidemiological zoning depends on several indicators, first of all, the occupancy rate of beds in facilities designated for the hospitalization of COVID-19 patients. To remain in the green zone, a region should have more than 50 percent of such beds unoccupied. The level of testing is another important indicator: the average number of tests should be more than 24 per 100,000 population in the last seven days for a region to not be downgraded to a more restrictive regime.

Also key are the numbers of coronavirus cases and the infection rate. In order for a region to not be considered at risk, the number of new coronavirus cases per week cannot exceed 11 percent of the total number of active cases in a region and the infection rate cannot be more than 10 percent per week. Regions should not register more than eight cases per 100,000 population in total for the previous seven days.

A region transitions from one zone to a more restrictive one if, for five days in a row, there is a deterioration on one of the defined indicators.

Beginning on September 1, all schools will open in Ukraine. However, if a district’s epidemiological situation does not meet Ministry of Health requirements, educational institutions will be forced to close for quarantine. Schools will be closed only in areas designated as part of the red zone.

On August 7, at a meeting of the State Commission for Technogenic and Environmental Safety and Emergencies, Prime Minister Denys Shmyhal reported: “Today in Ukraine another ‘anti-record’ has been set for the number of new cases of confirmed COVID-19 infection. Most new cases recorded were in the Kyiv, Odesa, Lviv and Kharkiv regions. Therefore, starting tomorrow, the government will switch to an emergency mode of operation: several meetings a week will be held of [regional] commissions on environmental and technogenic safety and emergencies to strengthen control over the epidemic situation in the country.”

According to the prime minister, by September 15 the number of daily testing should increase to 30,000. He also explained: “We should introduce a compulsory marking of the tests of the National Police, doctors, teachers and certain other categories of workers separately. In this way, we will be able to get more detailed statistics and understand which categories of the population spread the disease faster.”

Another objective of the government, Mr. Shmyhal noted, should be to improve the “detection-testing-isolation-contacts” system. In particular, he said, the creation of a method for tracking contact persons through surveys is crucial.

At the daily briefing on August 10, Minister of Health Maksym Stepanov reported that more than 28,000 patients with active coronavirus cases and almost 100,000 high-risk exposure contact persons were in self-isolation.

“On average, we have four or five contact persons for each case. It is important that all high-risk exposure contacts, without exception, stay in self-isolation following the established rules,” Mr. Stepanov noted.

In certain regions, the health minister continued, “we have already started deploying second-wave hospitals. They have prepared 10,237 beds for the hospitalization of patients with COVID-19. These hospitals have 851 intensive-care beds and 1,442 ventilators.”

According to the Minister Stepanov, the rate of coronavirus spread in Ukraine has grown and the increased number of hospitalizations (more than 200 people per day) in some regions has led to the occupancy of first-wave hospitals by more than 50 percent, which necessitated the preparation of second-wave medical facilities.

He also noted that the purchase of personal protective equipment is conducted with funds from the state budget and the World Bank. “As part of our joint project, we will purchase new systems for PCR testing [polymerase chain reaction testing, which detects viral RNA] – about 1.2 million units. We also continue to purchase equipment for our laboratory centers,” Minister Stepanov reported.

The Ukrainian community in the U.S. has also helped Ukraine in the fight against the novel coronavirus. Together with partners, volunteers and donors from all over the country, the non-profit Razom for Ukraine raised and delivered over $45,000 of supplies to health-care workers on the frontlines in Ukraine.

Lyuba Shipovich, co-founder and vice-president of Razom, who led the project, commented: “The COVID-19 pandemic is forcing medical professionals worldwide to fight for others’ lives by putting their own in danger. Razom is thankful to our partners, volunteers and all the people who came together to support health workers in these difficult times. Each donated dollar is extremely valuable to protect health professionals while saving their patients during the pandemic.”

Beginning in the early days of the pandemic in March, Razom volunteers joined the coordination center established by the Kyiv-based charitable foundation Patients of Ukraine to support health-care professionals in Ukraine. Fund-raising campaigns launched by Razom and by partner organizations have raised $43,556 – almost 20 percent of the total donations raised by Patients of Ukraine – which enabled the coordination center to procure and distribute PPE to health-care facilities all over Ukraine. Health-care workers fighting COVID-19 in Ukraine received 1,588 protective suits, 10,652 respirators and two oxygen concentrators.

As the battle against the coronavirus continues, the Cabinet of Ministers of Ukraine reported the latest data: as of August 12, there were 84,548 officially confirmed COVID-19 cases in Ukraine, 45,686 people have recovered, and 1,970 patients have died. The total number of tests performed was 1,214,941. During the previous 24 hours, 1,433 new cases were confirmed. There were 19 deaths and 752 recoveries during that same period.