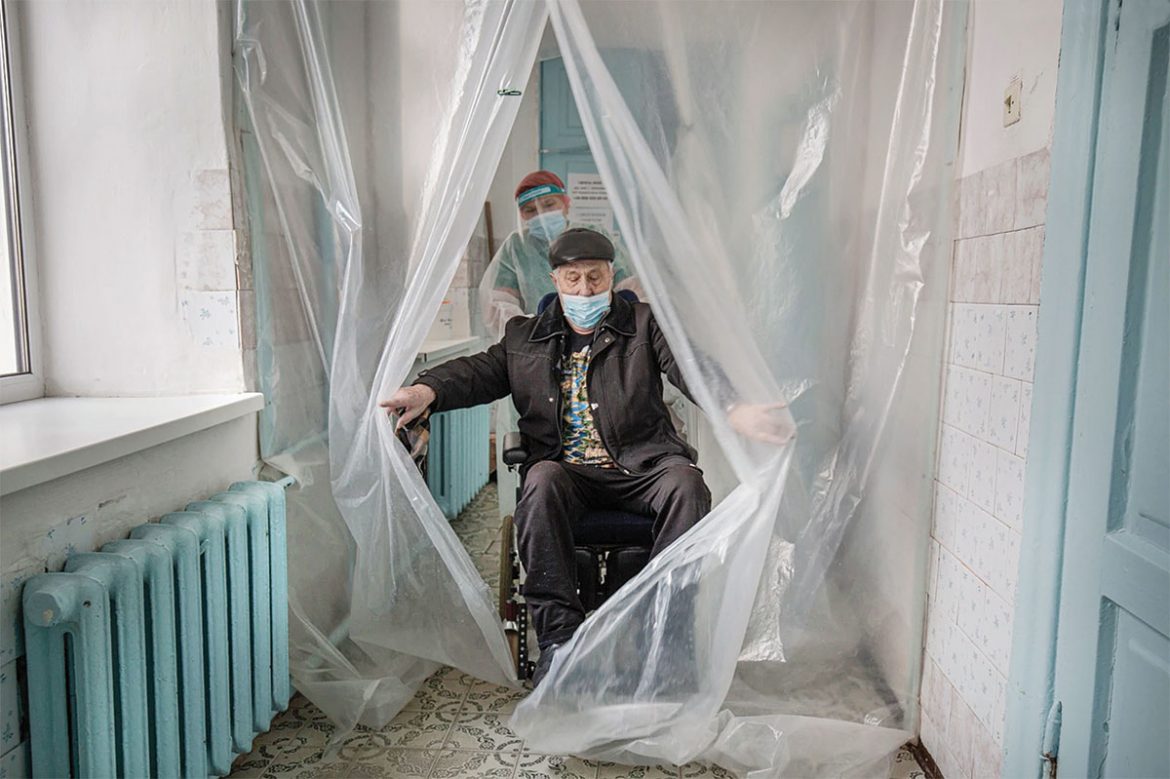 A man leaves a hospital in the Zhytomyr region after being hospitalized for COVID-19.

Top doctor tests positive after getting first dose of a vaccine

LVIV – While many Western countries have begun to see significant declines in COVID-19 infections and death rates, Ukraine instituted another pandemic lockdown to combat a record-setting spike of new cases that include the country’s chief state sanitary doctor.

Viktor Liashko, deputy health minister and chief state sanitary doctor of Ukraine, tested positive for the coronavirus on March 15. He received his first dose of the Oxford-AstraZeneca vaccine Covishield on March 2.

Ukraine has faced numerous challenges in its fight against the virus, including a slow and inefficient vaccination process that has been met with wide public distrust of COVID-19 vaccines. The result has been a record number of new cases and deaths.

On March 23, 14,174 people tested positive for COVID-19, the highest number of new cases since the pandemic began, according to Ukraine’s minister of health, Maksym Stepanov. Of that number, 5,438 people were hospitalized and a new high of 342 people died on March 23. The previous record number of fatalities occurred a day earlier, on March 22, when 333 people died.

“The situation with the spread of COVID-19 on the territory of Ukraine is deteriorating,” Mr. Stepanov said during a press conference on March 23. “We still have a very difficult period ahead of us. Today we have set a record for the number of deaths – for the first time in the country, the figure of lethal outcomes crossed 300 people in one day.”

Ukraine currently has 272,861 active coronavirus infections, according to the health minister. As of March 25, 137,026 people have been vaccinated, though only one person has received both doses of a vaccine. The remaining 137,025 people have received their first dose.

The country is currently in the second phase of the COVID-19 Vaccination Road­map, a plan which seeks to vaccinate 70,000 primary care workers. Family doctors and their assistants are scheduled to receive the first vaccines, and people over age 80 will be the next group to be vaccinated.

Ukraine expects to receive more vaccines in the coming weeks. It currently has a limited supply of half a million doses of the Oxford-AstraZeneca vaccine Covishield, which is being produced by the Indian Serum Institute. The vaccine, which has been approved by the World Health Organization, the United Kingdom, the European Union, India and Canada, is being provided to Ukrainians by the government for free.

To raise public trust in the vaccine and encourage people to voluntarily be vaccinated, many Ukrainian officials, including Mr. Stepanov and President Volodymyr Zelen­skyy, have received a Covishield vaccination. Those measure have not significantly altered public opinion of coronavirus vaccines, and Mr. Liashko’s positive test result raised questions for some people here. 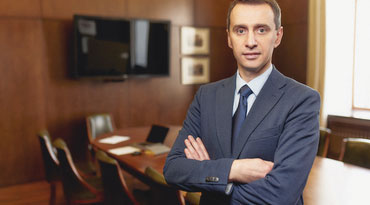 Mr. Liashko tested positive 13 days after he received a first dose of the vaccine, though he stressed publicly that the vaccine needs time and a second dose before it reaches its highest level of efficacy.

“I received a positive PCR for COVID. I got it in the period when immunity from vaccination is not yet fully formed,” Mr. Liashko explained on his Facebook page.

According to a survey conducted by the Razumkov Center, 51.5 percent of Ukrainians said that they do not intend to take a COVID-19 vaccine. Only 12 percent plan to get vaccinated soon (or have already done so), 16 percent said that they intend to do so, but later, 10 percent said they will take a vaccine if required to (for example, for a trip abroad) and 10 are undecided.

The Razumkov Center study also found that people who do not intend to be vaccinated said they believe vaccines are not effective or safe. Among those who said they do not intend to get a vaccine, 45 percent of the people in that group said they would take “some other” vaccine.

As a result, many medical workers who have priority access to the Oxford-AstraZeneca vaccine Covishield have refused to get vaccinated. In one specific instance, on March 10, all of the healthcare workers in a hospital in Chernivtsi refused to be vaccinated.

Natalia Husak, deputy head of the Chernivtsi Regional State Administration, said that some medical facilities do not communicate with health workers on vaccination issues and, therefore, are not able to understand why healthcare workers don’t want to be vaccinated.

“It is quite difficult even to hear the arguments of medical workers as to why they are against vaccination,” Ms. Husak said.

In addition to a low level of public trust in the vaccine, the Ukrainian medical system has been very slow in managing its vaccination program. Ukraine has one of the lowest vaccination rates in Europe. As of March 24, only Belarus and Northern Macedonia performed fewer vaccinations per capita in the region. 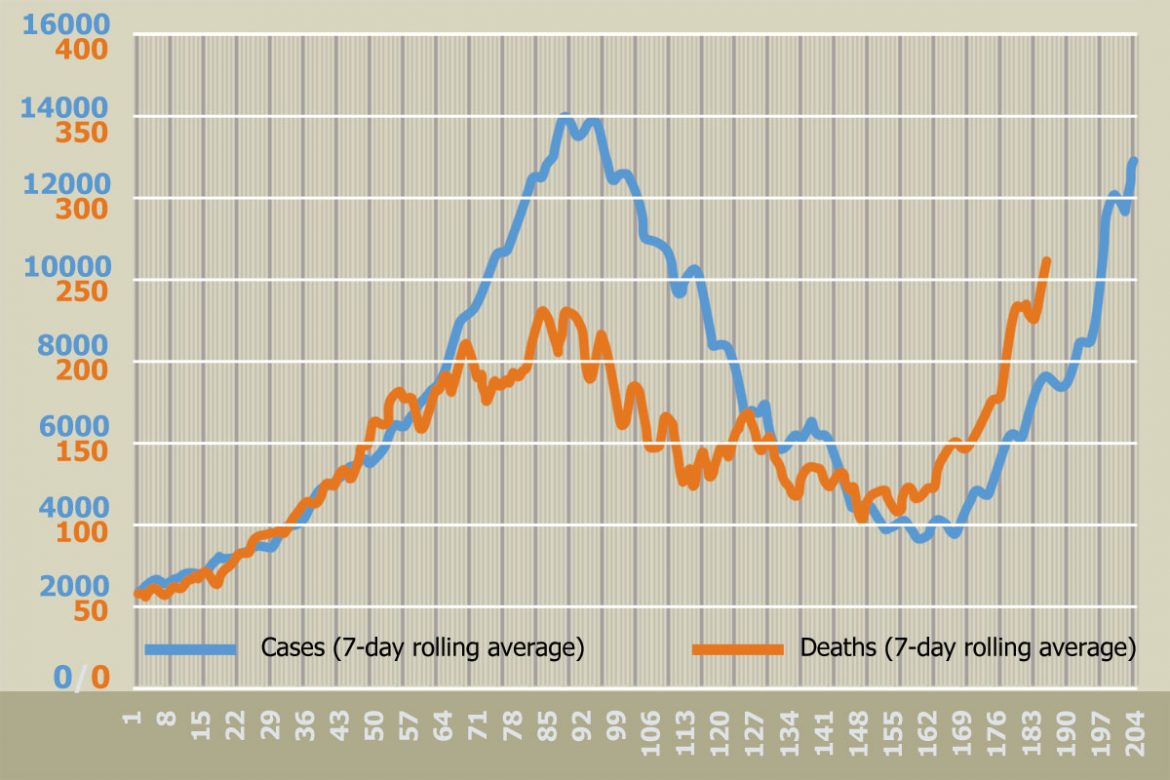 As a result of the record surge in cases, eight regions and the capital, Kyiv, are as of March 24 in what the government has categorized the red zone (total lockdown), while 15 regions are in the orange zone (one step below total lockdown). Only Kherson is in the yellow zone (two steps below total lockdown), and there are no cities or regions listed in the green zone, which has no pandemic restrictions.

At the behest of the Ukrainian government, local authorities, including the Lviv and Kyiv city councils, introduced previous lockdown measures.

“All powers are now devolved to local authorities,” Prime Minister Denys Shmyhal said. “Nowadays, community leaders have the opportunity to introduce stricter quarantine measures on their own, so I urge others not to wait for instructions, but to assume such responsibility.”

Mr. Shmyhal noted that the number of hospitalizations had recently increased, and the new COVID-19 infections have led to more severe complications for people who have contracted the virus.

Authorities do not plan to introduce a national lockdown soon to combat the rising number of coronavirus cases. According to Mr. Stepanov, the Ukrainian government is trying to find a balance between implementing national restrictions and economics.

However, the Secretary of the National Security and Defense Council, Oleksiy Danilov, said that in the event of a deterioration in the coronavirus situation in various regions, the government will have to “close the whole country.”

“When we completely close the regions, this will be an exceptional case,” Mr. Danilov said. “And if the development of events is not in an optimistic scenario, then I assume that the whole country may be closed. After all, human life should come first.”

Mr. Danilov said the government is monitoring the rising number of cases and said the NSDC may hold a specific meeting on COVID-19 if the situation does not improve in the near future.

“Currently, there is clear evidence that an adaptive quarantine is an effective mechanism, and it works,” Mr. Shmyhal said. The prime minister also noted that if the vast majority of regions in the country were in the government’s red zone, officials would be forced to introduce enhanced quarantine measures throughout the country.

“If we all carefully adhere to epidemic restrictions, if we reduce social contacts, a lockdown will not be necessary,” Mr. Shmyhal said.