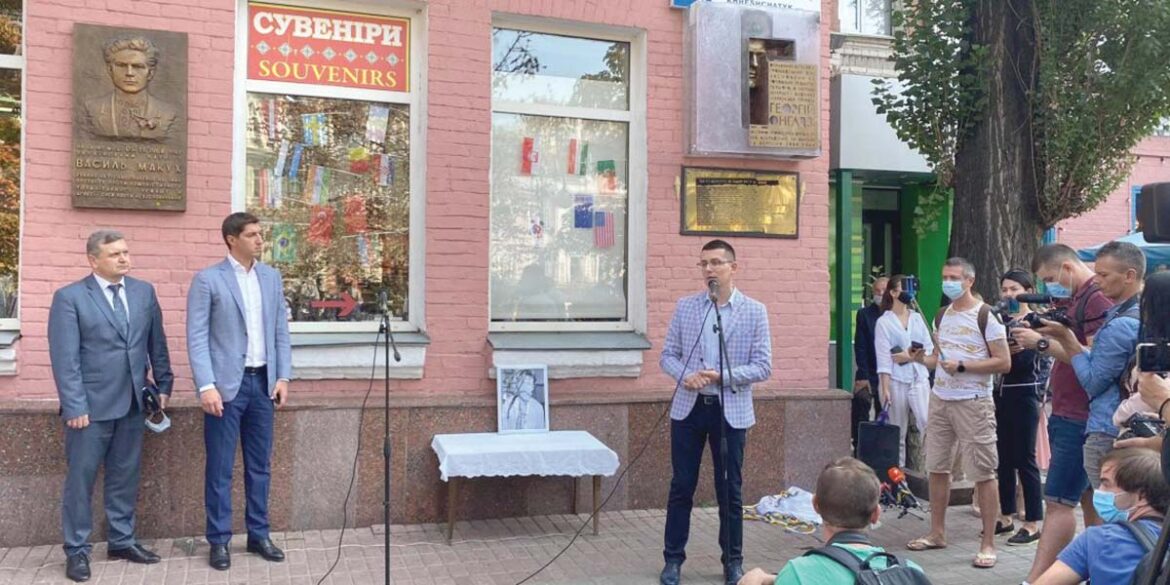 National Union of Journalists of Ukraine

At the unveiling in Kyiv of a memorial plaque to Heorhiy Gongadze. The plaque was installed on the building of the National Union of Journalists.

On the occasion of the solemn anniversary, a memorial plaque to Gongadze was erected on the façade of the National Union of Journalists’ building in Kyiv. The unveiling of this commemorative plaque on September 16 marked the beginning of a week in memory of Ukrainian journalists who have died in the line of duty. The premiere of the film “Gongadze’s Murder. 20 Years in Search of Truth” also took place on September 16 on the Ukrainian public channel.

“Heorhiy called the last project in his life ‘Ukrainian Truth.’ He created an Internet resource and believed in its success even when only 1 percent of Ukrainians had access to the Internet,” said the representative of the Gongadze family, Valentyna Telychenko, at the unveiling of the memorial plaque on Kyiv’s main street, the Khreshchatyk. “Heorhiy foresaw the future. Through his own efforts and life, he opened new horizons for us. Heorhiy inspired, encouraged and motivated others to action. And if not with his life, then with his death, he changed Ukraine,” said Ms. Telychenko, a human rights activist.

Serhiy Tomilenko, the head of the National Union of Journalists, noted that the vast majority of journalists currently working in the media work “under the sign of fate” of Heorhiy Gongadze. According to him, Gongadze’s fate is a sign of how dangerous a journalist’s profession is. “We note with sadness that the number of physical aggression incidents is measured in dozens every year. Since the beginning of the year, we have identified 49 such cases. Journalists are harassed, beaten, cameras are damaged,” Mr. Tomilenko said. He noted that this week events are being held in all regions of Ukraine to honor murdered journalists, in particular, Igor Alexandrov, Borys Derevyanko, Pavlo Sheremet, Vasyl Serhiyenko and Vadym Komarov.

On September 18, journalists and human rights activists gathered on Independence Square in Kyiv to honor the memory of Gongadze. They also published an appeal that was signed by several organizations: the Heorhiy Gongadze Prize, the Ukrainian branch of the International PEN Club, ZMINA Human Rights Center, Institute of Mass Media, Center for Civil Liberties, the NGOs Detector Media and Lviv Media Forum, and Internews-Ukraine.

“The brutal crime, as well as the so-called ‘Melnychenko recordings’ that gave rise to suspicions about the involvement of then-President of Ukraine Leonid Kuchma in the assassination, upset the professional community and society, and provoked mass protests that later escalated into [the movement] ‘Ukraine without Kuchma.’ However, despite pressure from civil society and international organizations, there is no end in sight,” reads the statement.

“Unfortunately, Gongadze’s death is not the only violent crime against a journalist. According to monitoring and human rights organizations, several dozen journalists were killed during the years of independence in Ukraine. The final list has not yet been drawn up, and the perpetrators of most crimes have not been identified,” stated the statement’s signatories.

On May 4, 2019, journalist Vadym Komarov was brutally beaten in Cherkasy. After 46 days in a coma, the man died. Komarov was uncomfortable for many influential people in Cherkasy, so he received regular threats. The crime remains unsolved, and the perpetrators are unpunished. Among the most high-profile cases of recent times is the murder of journalist Pavlo Sheremet on July 20, 2016, in Kyiv. The trial of those accused of his murder continues, but the defendants deny involvement in the crime and call the prosecution politically motivated.

“These cases are only the clearest evidence of a large-scale and alarming trend. Because Ukraine is an independent democracy that values ​​freedom of speech and the safety of citizens, including those who fight for the truth, journalists should not be harassed, attacked or killed, and cases against perpetrators and organizers [of crimes] should be investigated rather than fabricated by law enforcement,” the journalists and human rights activists said in their appeals.

“We, the undersigned, urge the Ukrainian authorities to ensure a transparent investigation into these cases, to identify and name the perpetrators of the killings, and to prevent the release of the perpetrators whose involvement has been proven. We also call for the protection of journalists and for systematic measures needed to protect citizens’ right to information,” they underscored.

The United States Embassy in Ukraine called for the investigation of all crimes against journalists. The video statement in Ukrainian by U.S. Embassy Counselor for Public Affairs Walter Braunohler was posted on Facebook on September 16. “Today we commemorate Heorhiy Gongadze, a brave journalist who was killed for seeking the truth. No member of the press should be threatened, attacked or arrested for doing his or her job. Crimes against journalists should be thoroughly and promptly investigated so that those responsible are held accountable. Independent media are an important part of successful democracies,” Mr. Braunohler said.

Gongadze disappeared on September 16, 2000. In November of the same year, his headless body was found in a forest near Tarashcha, Kyiv region. In 2009, the remains of a skull were found in the Kyiv region; according to the Prosecutor General’s Office, it belonged to Gongadze.

On March 15, 2008, the Kyiv Court of Appeals found Valery Kostenko, Mykola Protasov, and Oleksandr Popovych guilty of killing Gongadze. They were officers of the Department of External Surveillance of the Ministry of Internal Affairs of Ukraine. The court sentenced them to 12 to 13 years in prison. In January 2013, a court sentenced Oleksiy Pukach, the former head of the Internal Affairs Ministry’s external surveillance department, to life in prison for the journalist’s murder.

In 2011, the prosecutor’s office opened a case against ex-President Kuchma, but the court closed it that same year. On January 31, 2011, the court refused to recognize the Gongadze murder as ordered.

The investigation recognized former Internal Affairs Minister Yuri Kravchenko, who had long since died, as the person who ordered the murder of Gongadze. According to the official version, in 2005, Kravchenko committed suicide with two shots to the head.

The body of the murdered journalist was buried on March 22, 2016, in Kyiv. Gongadze’s family believes that the real perpetrators of the murder have not yet been named.

“Recently, as the anniversary of his abduction and murder has drawn near, I have been thinking about my father’s legacy,” writes Gongadze’s daughter Salome in a commentary for the British publication New Statesman. “It reminds me that it is always harder to do what is right. Today, as in his time, to fight for the right thing is to struggle. Gongadze was intimidated for his journalism. His work, politically sensitive and upsetting to powerful interests, meant that he was rarely given stable work and found it difficult to provide for his family. The ultimate consequence of his struggle was a family turned into refugees and two children who never knew their father. My father chose to struggle because he was fundamentally idealistic about how things could be. It is hard for those of us living in so-called advanced democracies, that sometimes seem to be entering some kind of twilight, to recognize the ideal he imagined. We feel foolish encouraging Ukrainians to reform their system when we know how broken our own are.”

“I will be 23 soon, and I’m starting to look like my father,” Ms. Gongadze shared. “I have his square jaw and eyes that crinkle up when we grin for photographs. I suspect that if he were still around, he would say we were part of the same fight. He would be proud of the new generation of Ukrainians, who live more freely thanks to his efforts and carry them forward. And he would remind us not to give up, because he never did.”