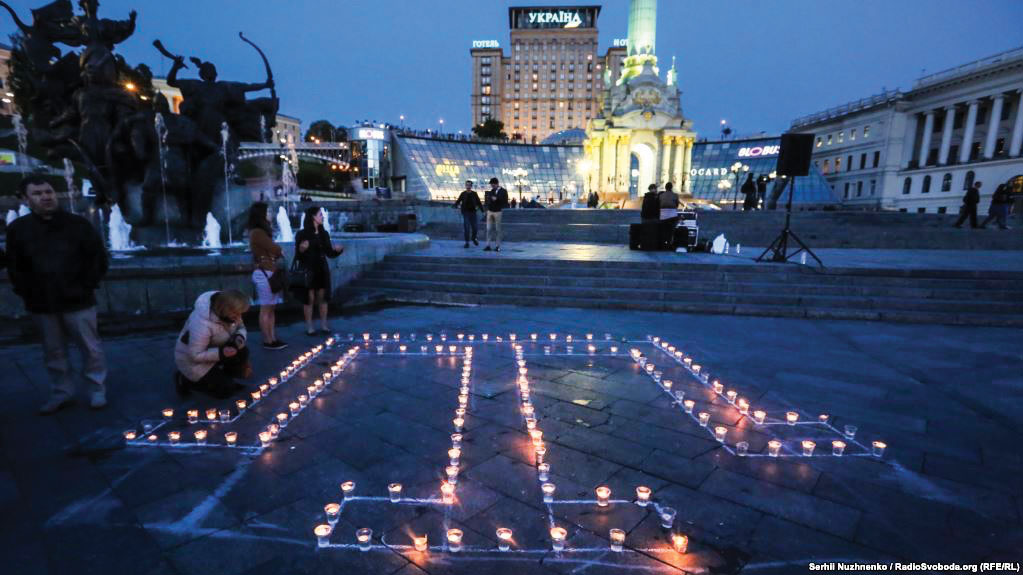 People lay candles in Kyiv on May 18 to commemorate the Soviet-era mass deportation of Crimean Tatars.

A minute of silence was observed at noon on May 18 across the country – except in Crimea, which Russia seized in March 2014 after sending in troops and staging a referendum boycotted by many Crimean Tatars.

In the Crimean capital, Symferopol, the Russian-imposed authorities prohibited Crimean Tatars from gathering in the central square to mark the anniversary of deportation. Several activists were detained and later released.

In Kyiv, by contrast, church bells tolled for a minute to pay tribute to the victims of the deportation.

“Seventy-three years ago the Communist regime brutally expelled Crimean Tatars and representatives of other ethnic groups from their homelands,” President Petro Poroshenko said. “For the Ukrainian nation it is an unhealed wound that especially hurts after the annexation of Crimea.”

The Crimean Tatars were deported en masse from the Black Sea peninsula in May 1944, after Stalin accused them of collaborating with Nazi Germany.

Starting on May 18, 1944, some 250,000 were put on trains – most of them in the space of two days – and sent to Central Asia. Tens of thousands died during the journey or after they were left on the barren steppe with few resources.

Crimean Tatars were not allowed to return to Crimea until the late 1980s, when Mikhail Gorbachev conducted reforms in the years before the disintegration of the Soviet Union.

In November 2015, the Ukrainian Parliament passed a law declaring May 18 the Day of Commemor-ation of Victims of the Genocide of the Crimean Tatars.

After Russia seized Crimea, Russian President Vladimir Putin promised the Crimean Tatars that they would be treated well and guaranteed equal rights.

But Crimean Tatars, rights activists and Western governments say Russia has subjected Crimean Tatars and others who opposed annexation to abuse, discrimination and politically motivated prosecutions on false charges.