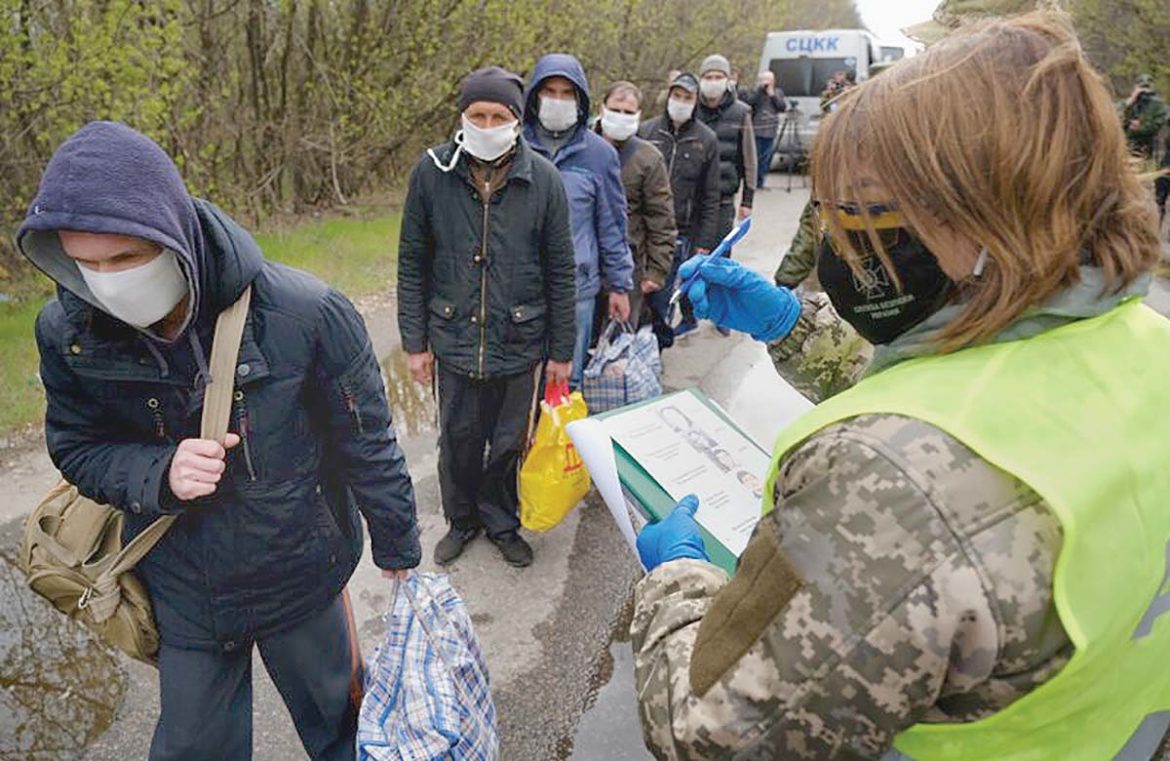 Ukrainian citizens being released on April 16 at the Mayorske checkpoint in the Donbas during an exchange of prisoners between Ukraine and Russian-backed forces in eastern Ukraine.

KYIV – Ukraine and Russia-backed militants have exchanged a total of 34 prisoners ahead of the Julian calendar Easter celebrations.

Ukrainian President Volodymyr Zelens­kyy’s office said on April 16 that 20 Ukrainians who were in the custody of the militants were returned to Kyiv.

The “separatists” said 14 people were handed to them by Kyiv authorities.

The Ukrainian and Russian sides in the so-called Trilateral Contact Group (TCG) said last week that they had agreed on to hold the swap before Easter on April 19.

Heidi Grau, special representative in Ukraine of the chairperson-in-office of the Organization for Security and Cooperation in Europe (OSCE) and in the TCG Group, hailed the move in a statement, expressing hope that “it will contribute to strengthening trust between the sides.”

Mr. Zelenskyy commented on the official website of Ukraine’s president that negotiations on the release of those detained in the occupied Crimea and in Russia are ongoing. “Ukraine must liberate all its citizens,” he underscored, as he pledged to continue to implement a strategy to return Ukrainian citizens illegally detained in the temporarily occupied territories and in Russia.

President Zelenskyy, who was elected last year on promises of ending the conflict in the eastern regions of Donetsk and Luhansk, had already overseen two prisoner exchanges.

In September 2019, Russia and Ukraine each exchanged 35 prisoners. In December, Ukraine turned over 124 prisoners to the militants in exchange for 76 Ukrainians they held.

The latest prisoner swap came as United Nations Secretary-General Antonio Guterres in March called on warring parties in conflicts around the world to halt fighting due to the coronavirus pandemic.

With reporting by Ukrayinska Pravda, UNIAN, Interfax and TASS. Added to this RFE/RL story is information from the Presidential Office of Ukraine.