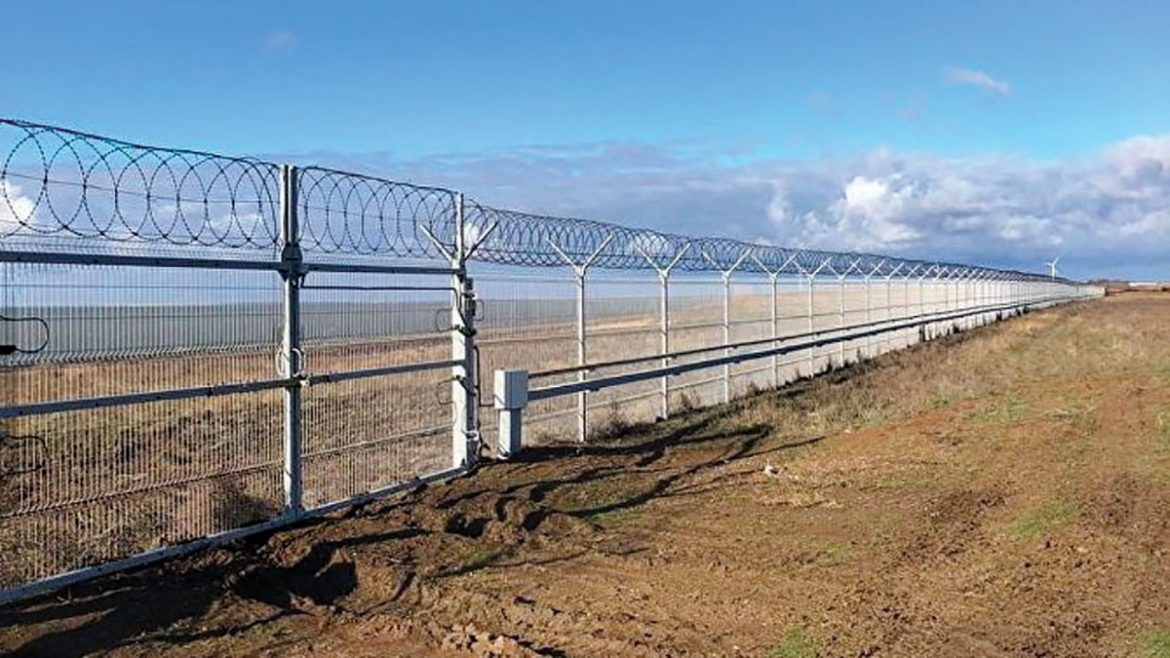 Russia completed a 37-mile fence two meters in height on December 27, 2018, on the Ukrainian territory of Crimea that it annexed. It separates the peninsula from mainland Ukraine.

KYIV – Ukraine and Russia exchanged a new round of tit-for-tat sanctions late in December as martial law in 10 Ukrainian regions expired the same month. Russia also completed a 37-mile border fence on the Ukrainian territory of Crimea on December 27 that separates the annexed peninsula from mainland Ukraine.

As martial law expired on December 26, 2018, the National Security and Defense Council (NSDC) said it imposed additional sanctions on an unspecified number of “Russian companies, businessmen, politicians and deputies, [and] employees of security forces who actively supported or promoted aggressive actions against Ukraine.”

Restrictive measures were also imposed on the people who held phony elections in the occupied parts of the Donetsk and Luhansk regions in November 2018. Measures were additionally taken against the “military servicemen, judges and law enforcement officers involved in the illegal seizure of Ukrainian sailors during Russia’s aggression against Ukraine in the Kerch Strait on November 25, 2018, and their illegal detainment in Russian prisons,” the NSDC said.

More than 1,600 Russians were denied entry to Ukraine during the one-month period of martial law, according to the Border Guard Service. Entry bans for Russian males age 16-60 were kept in place after martial law expired.

Russia added some 200 Ukrainian individuals and legal entities to an existing economic sanctions list to “protect the interests of the Russian state, companies and citizens of Russia,” Prime Minister Dmitry Medvedev tweeted on December 25, 2018.

On November 1, 2018, 68 Ukrainian companies and 322 citizens were initially sanctioned based on Russian President Vladimir Putin’s decree to introduce “special economic measures” in connection with Ukraine’s “unfriendly actions,” according to the UNIAN news agency.

Relations between the two neighboring Eastern European countries have severely deteriorated since February 2014, when Russia invaded Crimea and later parts of the easternmost regions of Luhansk and Donetsk. More than 10,400 have been killed in the Moscow-stoked Donbas war, including at least 133 Ukrainian soldiers last year, according to censor.net. About 1.5 million people are officially registered as internally displaced, according to the Social Policy Ministry of Ukraine.

Moscow additionally banned the import of more than $500 million worth of goods from Ukraine, according to the Russian Economic Development Ministry. That was in retaliation for similar economic sanctions that Kyiv has imposed. The Russian list now bans 18 types of products, including wine and sweets that either originate or pass through Ukraine.

Russia’s Federal Security Service (FSB) announced on December 27, 2018, that it had completed a 37-mile fence two meters in height just south of Kherson Oblast in annexed Crimea at a cost of $2.8 million.

It was constructed to prevent “attempts by saboteurs and reconnaissance groups to break through,” the state-run Russian RIA Novosti news agency reported, citing the FSB. It also will thwart attempts to smuggle arms, tobacco, alcohol and drugs to Crimea, according to the FSB.

The structure has several types of barricades, and is equipped with vibration sensors, night-vision security cameras, a video feed and an alarm.

On December 22, 2018, the United Nations General assembly passed a resolution that calls on Russia to end human rights violation in the Crimea. Significantly, it recognizes Crimea native and pro-Ukrainian activist Volodymyr Balukh as a political prisoner, as well as Emir-Huseyn Kuku and imprisoned filmmaker Oleg Sentsov, who was awarded the Sakharov Prize for Freedom of Thought last year.

Mr. Sentsov, who supported the Euro-Maidan pro-Western cause, was arrested on May 11, 2014, on politically motivated terrorism charges and subsequently given a 20-year prison sentence in Russia. Amnesty International characterized the political prisoner’s prosecution as “an extremely cynical show trial.”

Russia holds nearly 100 Ukrainian prisoners of war and political prisoners, according to the Kharkiv Human Rights Protection Group. The SBU says there are over 100 additional POWs and civilian hostages in the occupied parts of Donetsk and Luhansk oblasts.

On December 31, 2018, the Justice Ministry said it submitted additional documents to the European Court of Human Rights (ECHR) regarding the annexation of Crimea and human rights violations that the ECHR is expected to consider in February. Deputy Justice Minister Ivan Lishchyna, who is commissioner for ECHR affairs, posted a picture of the registered documents on the ECHR website in a Facebook post.