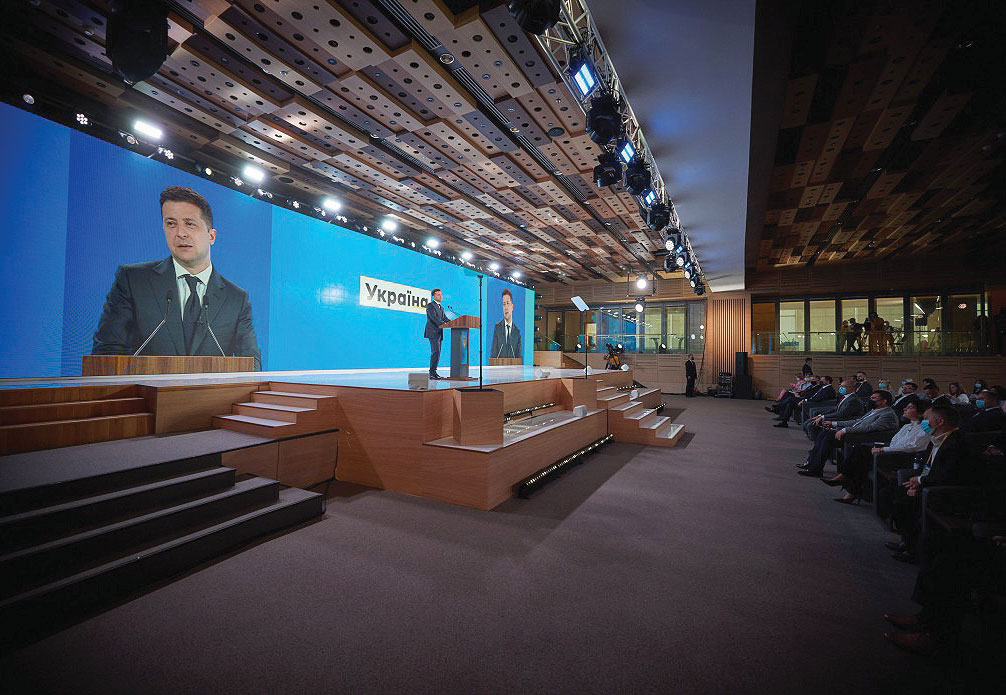 KYIV – The National Security and Defense Council (NSDC) of Ukraine on June 18 announced sanctions against Dmytro Firtash, a Ukrainian oligarch who has been indicted by the United States for corruption. Mr. Firtash is currently living in Vienna and fighting extradition to the U.S.

The NSDC also sanctioned Russian businessmen Pavlo Fuks. The council also extended sanctions imposed on a number of Ukrainian individuals and legal entities that were first sanctioned three years ago. Those measure were set to expire at the end of June.

“At the suggestion of the Security Service of Ukraine (SBU), a decision was made to impose sanctions against Dmytro Firtash, Pavlo Fuks, Serhiy Chemezov and Mykhailo Shelkov,” Ukrainian President Volodymyr Zelenskyy said.

Oleksiy Danilov, the NSDC secretary, said a complete package of sanctions was imposed on Mr. Firtash because, according to the SBU, the businessman’s titanium companies supplied raw materials to Russian military enterprises.

Mr. Danilov said Mr. Fuks was sanctioned because of numerous violations committed during the process of obtaining licenses for the development of more than a dozen natural gas fields.

The NSDC also imposed sanctions against 12 individuals who, according to Ukraine’s Ministry of Internal Affairs, have influenced criminal activity or are leaders of criminal organizations.

The NSDC also imposed sanctions on four legal entities and six individuals who are affiliated with the Russian secret service. According to the NSDC, these individuals have either been directly involved in the development of the Petya virus, used it or organized cyberattacks on critical infrastructure in Ukraine. The individuals are already on the U.S. sanctions list, and U.S. law enforcement bodies are prosecuting them for cyberattacks against the United States. The Petya malware infected millions of computers during the first year of its release.

Mr. Danylov did not provide details about the sanctions, but historically Ukrainian sanctions have been used to freeze individuals’ bank accounts and other asset inside the country.

The meeting of the NSDC on June 18 came three days after Mr. Zelenskyy held the forum “Ukraine 30. Economy without Oligarchs.” The event is a part of a series of 30 public forums being held by the Ukrainian president’s office on the occasion of Ukraine’s 30th anniversary of independence.

During the forum on June 15, Mr. Zelenskyy noted that the country’s politicians have repeatedly promised to tackle corruption and oligarchs. But the number of oligarchs, Mr. Zelenskyy said, has only grown.

“For the first time since independence, instead of promises, we have taken real action to overcome this vicious circle of oligarchs’ influence,” Mr. Zelenskyy said. “The essence of this circle is simple: oligarchs accumulate illegal capital – part of this capital goes to the creation, promotion and further maintenance of politicians of different levels and officials to increase the illegal capital, part of which again goes to support the same politicians and officials.”

Mr. Zelenskyy said that the country’s oligarchs take advantage of the weakness of state institutions and systemic corruption, receive resources, assets and preferences for their enrichment but they pay nothing in return. He said they use their wealth against their own country.

“I and our entire society are waiting for quick and clear legislative initiatives that should introduce effective antitrust tools to overcome the oligarchic system,” Mr. Zelenskyy said.
Mr. Zelenskyy recently said his number one priority at home is “building a country without oligarchs” in which the rule of law and equality before it should prevail.

His team completed a draft law on oligarchs that was submitted to Ukraine’s parliament on June 2. According to the draft law, any three of four conditions suffice for the NSDC to include a person in the register of oligarchs: significant influence on the media, on political life, ownership of monopolistic companies and personal wealth totaling a million times more than the average in Ukraine (that is, about $83 million at the current exchange rate). Public servants will be obliged to register their contacts with oligarchs.

On May 11, the NSDC had already identified 13 people who fit the new definition of an oligarch. It did not name the individuals classified as oligarchs.

According to the draft law, the decision to recognize a person as an oligarch would be made by the NSDC based on a proposal from the government, a member of the NSDC, the National Bank, the Security Service or the Antimonopoly Committee. Those who are recognized as oligarchs will be included in the newly created public register on the National Security and Defense Council website.

In addition, politicians and civil servants who meet with or have any non-public contacts with persons from the register will be required to report this to the NSDC. To be removed from the register, individuals will have to prove to the NSDC that they no longer meet at least two of the requirements.

Critics of the draft law said certain criteria for listing individuals as oligarchs are too broad.

“The criterion of asset value should start at approximately one billion dollars, and not a few tens of millions, as stipulated in the bill,” said Pavlo Kukhta, the former head of the Ministry of Economy of Ukraine.

Mr. Kukhta said that, as written, the draft bill would classify too many legitimate big businessmen in Ukraine as oligarchs.

For his part, Mr. Zelenskyy nonetheless said the draft law was a step in the right direction and he seemed intent on taking the fight against corruption to Ukraine’s oligarchs.

“It will be different from now on,” Mr. Zelenskyy said during the Ukraine 30 forum. “All we want is clear, transparent, equal and uniform rules for the whole of Ukraine. It doesn’t matter if you are a small entrepreneur, a farmer, a big tycoon or a foreign investor. There must be equal rules for all.”

Mr. Zelenskyy added that, “Political parties, the media, civil servants at all levels, judges, law enforcement officers, supervisory boards of state-owned enterprises – all this must function without the support and influence of large oligarchic capital.”