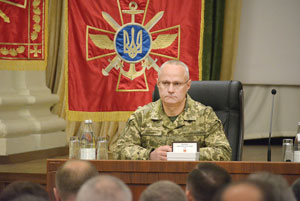 General Staff of the Armed Forces of Ukraine

Commander-in-Chief of the Armed Forces of Ukraine Ruslan Khomchak. 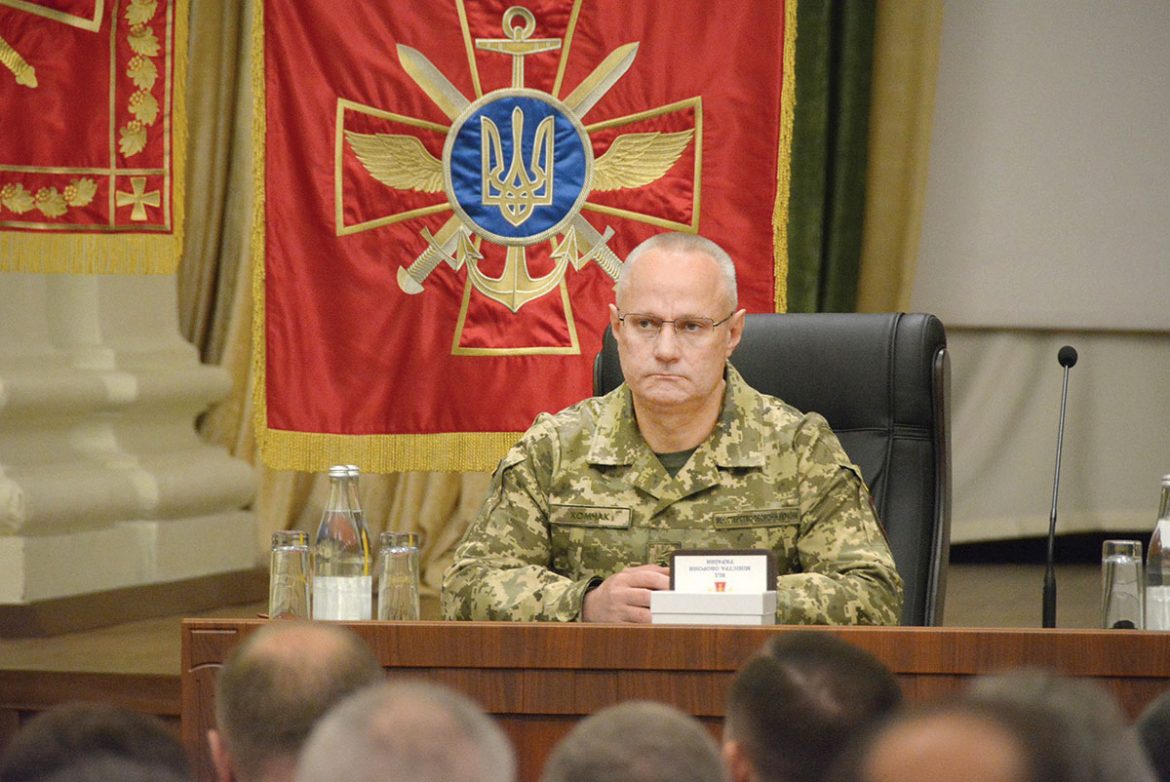 Commander-in-Chief of the Armed Forces of Ukraine Ruslan Khomchak.

KYIV – Ukrainian military Commander-in-Chief Lt. Gen. Ruslan Khomchak this week notified parliament that Russian troops are amassing near the country’s border in the “north, east and south,” including in occupied Crimea.

The Armed Forces head on March 30 delivered a presentation in the Verkhovna Rada where he said 28 battalion tactical groups (BTGs) are deployed near Ukraine’s border and are within one to two days striking distance of the contact line.

Russian troops in the vicinity had not left since military exercises concluded in the area on March 23, The New York Times reported, citing U.S. strategists.
An “additional concentration of up to 25 Russian BTGs is expected” there soon, the lieutenant general said, while adding that some 34,000 Russian military personnel are stationed in Crimea.

Four Ukrainian soldiers were killed after an hours-long battle on March 26 north of Russian-controlled Donetsk where forces under Moscow’s command and control have waged a smoldering war since 2014.

Lt. Gen. Khomchak, while addressing the Verkhovna Rada regarding the latest casualties, said Russia’s behavior was “aggressive” and a “threat to the military security of the state.”
Video footage shared by Russian channel Krasnodar Krai on March 31 showed Russian soldiers ferrying dozens of armored vehicles with what appeared to be 152-milli­miter self-propelled guns to Crimea across a bridge linking mainland Russia. 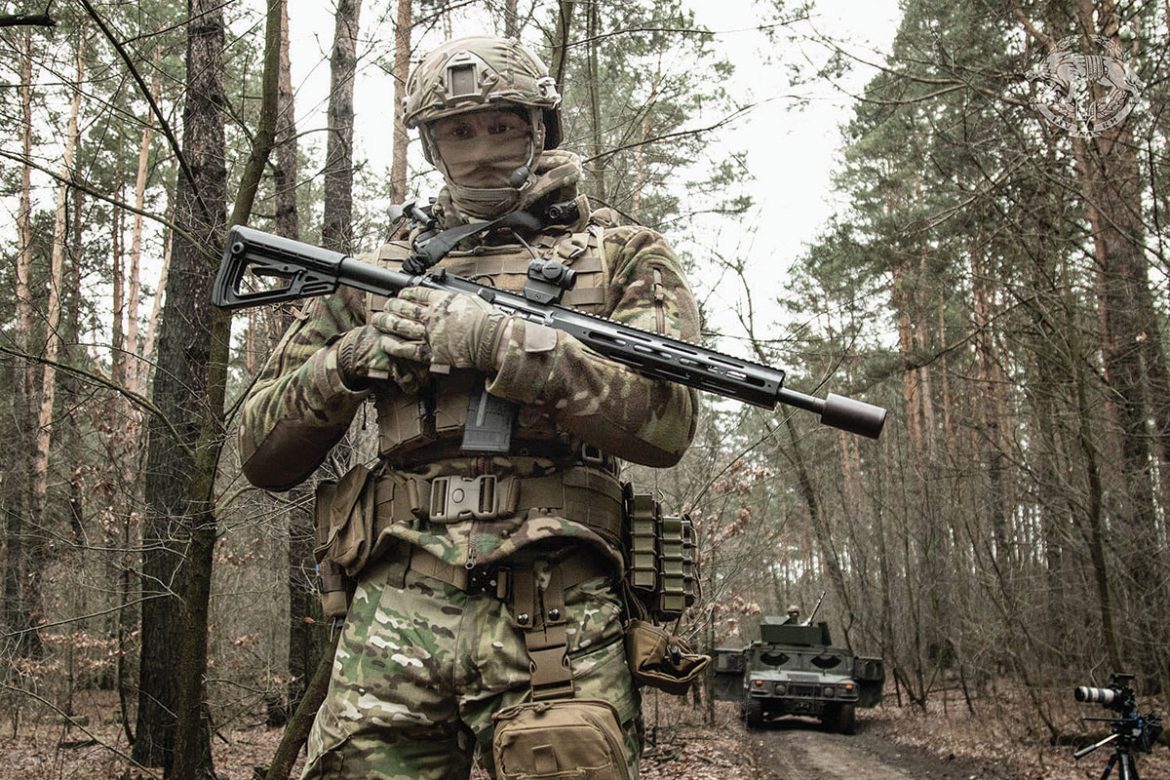 Following the parliamentary briefing, 308 lawmakers voted on a resolution condemning the escalation of violence in the two easternmost regions where fighting continues despite the latest ceasefire that was brokered in July but that has never firmly taken hold.
Lawmakers said 26 Ukrainian military personnel were killed this year as of March 30 and the total death toll is now about 14,000.

“Since the beginning of this year, there has been a significant increase in shelling attacks and armed provocations by the armed formations of the Russian Federation. […] The latest glaring fact was the massive shelling by Russian occupation forces on March 26…

In just one day, four Ukrainian servicemen were killed and one was seriously wounded by Russian weapons,” the parliamentary statement reads.

It furthermore called on Western countries to increase pressure on Russia to halt the aggression.

The escalation in fighting prompted the U.S. military’s European Command to raise its watch level from “possible crisis” to “potential imminent crises,” which is the highest level, The New York Times reported.

There is a “concerning” buildup of Russian forces near the border with Ukraine, an anonymous U.S. defense official told CBS News, and Bloomberg on March 31 reported in a flash headline that the chiefs of the general staff of the United States and Russia had spoken by phone at the initiative of the U.S.

Additional details from each side were not provided from the call between Chairman of the U.S. Joint Chiefs of Staff Gen. Mark Milley and Gen. Valery Gerasimov, the head of Russian’s military general staff.

“The two military leaders exchanged their views on issues of mutual concern,” a U.S. military readout of the call said, per Reuters.

Also, on March 30, the leaders of France, Germany and Russia held a teleconference. The agenda of that call included the escalation of fighting in Ukraine, but the call was held without Kyiv’s participation.

Afterward, Russian President Vladimir Putin acknowledged the uptick in violence and blamed Ukrainian forces for it.

An official readout from the Kremlin stated that he had “expressed serious concern about the escalation of armed confrontation on the contact line being provoked by Ukraine.”

In response, Ukraine’s Foreign Affairs Ministry told Radio Free Europe/Radio Liberty that peace in war-torn eastern Ukraine can only be achieved with the political will of the four so-called Normandy countries who took part in brokering two earlier ceasefires: Germany, France, Russia and Ukraine.

“The signals of our European partners following the talks with the Russian president have become significant: the Russian side must fulfill its obligations to adhere to the ceasefire, and the need to continue negotiations between the leaders of the quartet is emphasized,” Foreign Affairs Ministry spokesman Oleg Nikolenko said.

The last time the countries’ four leaders met was in December 2019 where additional agreements were made that included prisoner exchanges, the withdrawal of military personnel and hardware from several front-line towns, as well as other commitments.

Kremlin spokesman Dmitry Peskov on March 31 told journalists in Moscow that Mr. Putin, French President Emmanuel Macron and German Chancellor Angela Merkel agreed that a new summit was “essential” but would only likely take place after negotiations based on the previous Paris meeting resumed.

Meanwhile, the Head of the Presidential Office of Ukraine Andriy Yermak and U.S. National Security Advisor Jake Sullivan spoke by phone on March 29. The conversation centered on the fight against corruption and the situation in Donbas and Crimea, as well as Ukraine’s Euro-Atlantic ambitions. Statements by both sides released after the call point to “clear and consistent” American policy in supporting Ukraine’s sovereignty and territorial integrity.

Regarding the fight against corruption, the U.S. release stated that Mr. Sullivan “relayed the Biden administration’s commitment to revitalize our strategic partnership in support of President Volodymyr Zelenskyy’s … plan to tackle corruption….”