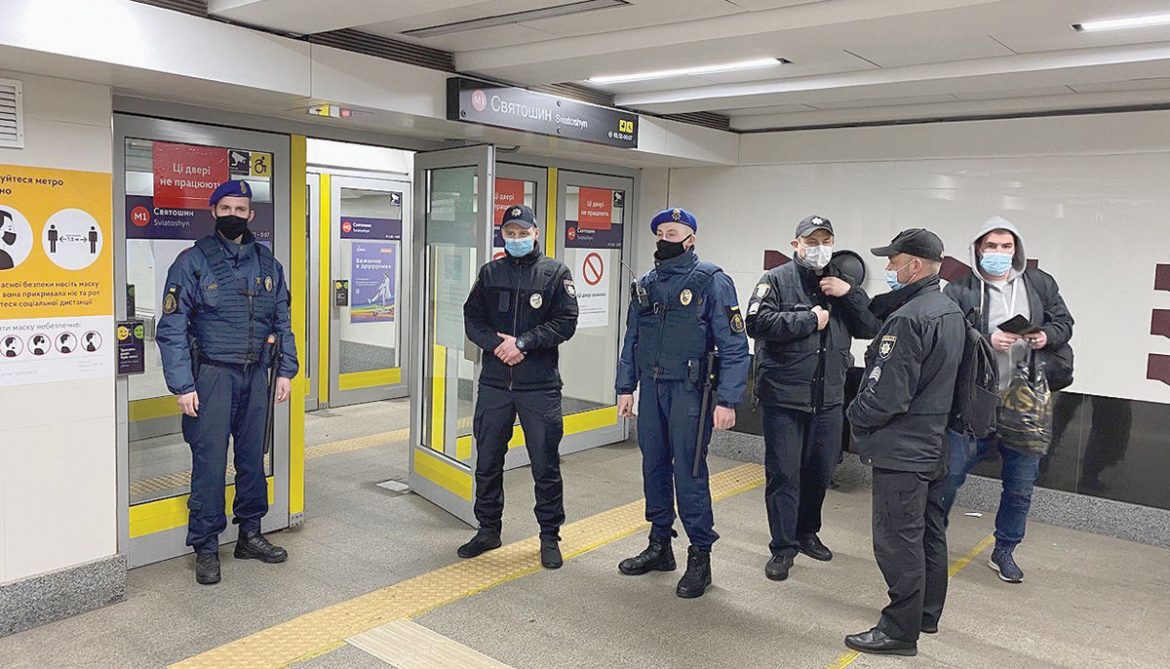 KYIV – With 13,276 new cases reported on April 5, Ukraine topped the list of European countries with the highest COVID-19 infection rate, according to the statistics portal Worldometer. The following day, Ukraine also saw record numbers of hospitalizations and fatalities since the pandemic began more than a year ago, with 5,587 people hospitalized and 481 dead on April 6.

Throughout the country of some 41 million people, 11 of Ukraine’s 27 regions are now under the highest level of lockdown, with all public places closed and events canceled. Schools, restaurants, shopping malls, cinemas, theaters, educational institutions, food markets, and other institutions are all officially closed in those regions.

Other Ukrainian regions remain in the orange zone, which is the level below the highest lockdown level, with limited use of public places and a ban on work at night. Gyms and cultural institutions are also closed in the orange zone. Only Kherson Oblast remains in the yellow zone with the lowest rates of COVID-19 infections and hospitalizations. Local authorities have the right to impose additional restrictions.

On April 2, Kyiv Mayor Vitaliy Klitschko said that, due to the rapid spread of the virus and the increase in mortality, the capital would impose stricter restrictions starting on April 5.

“This is a forced step. We understand how unpopular it is. But the situation is critical,” the Kyiv mayor said. “If we do not stop the rapid spread of the disease quickly, the medical system of the capital will collapse.”

Kyiv city council banned the use of public transport for unnecessary travel; only essential workers can use the city’s public transportation with special permits. As a result, on the morning of April 5, the streets of the capital were largely snarled with multi-kilometer-long traffic jams.

The presidential office said that the Kyiv authorities had not properly fulfilled the task of providing special transport permits to employees who work in jobs that support the country’s critical infrastructure. Many people, including doctors, were left without permits. Thus, they could not use public transport to get to hospitals.

City officials in the capital announced the requirement for the special transport permits on March 31, leaving only two working days for all enterprises to ask the city authorities for the permits.

“Printing, organizing their issuance, and providing special passes to all employees of critical infrastructure enterprises is the Kyiv authorities’ responsibility,” the presidential office said in a statement. “We are forced to state that this task was not performed properly.”

“We emphasize that the Kyiv authorities must urgently rectify the situation by providing the city residents with special passes for the use of public transport following the established procedure. A sufficient number of transport units on the routes for transportation must also be provided,” the presidential office said in its statement.

In the capital, 437,000 special passes were issued for the use of public transport, said the Kyiv Administration’s Department of Transport Infrastructure on April 5. Medical workers, rescuers, communal, transportation and social workers, trade workers, and the military received priority passes.

Police officers in the capital checked whether passengers who used public transport had the required passes, while mobile groups of law enforcement sought to ensure that traffic on the city’s roads was not congested. Officers also patrolled parks and other public places where crowds were possible. They also used a loudspeaker to address passers-by and warn them to comply with the heightened quarantine requirements.

Ukrainian President Volodymyr Zelenskyy stressed the need to provide financial assistance to businesses that have suffered during the lockdown as soon as possible.

“Small and medium-sized businesses are an important component of the Ukrainian economy, and first of all, these are our people. Today, they no longer have anyone to rely on except for the state during a global pandemic. And we, the state, must help and protect our people in this difficult time,” the president stressed.

“We understand that strict restrictions will hurt both business and the city’s economy,” Kyiv Mayor Vitaliy Klitschko said during a press briefing on April 2. “Today, we received many questions about whether the capital will provide financial aid to entrepreneurs. I will note that the parliament passed a law providing financial assistance to businesses from the state budget,” Mr. Klitschko said.

“With such a dynamic spread of the disease and the number of hospitalizations, we will soon not have enough beds in hospitals. Therefore, I once again appeal to the government, the Ministry of Health, to monitor the situation so that governmental medical institutions would accept patients with coronavirus in Kyiv,” Mr. Klitschko said.
During the previous week ending on April 4, police issued 1,881 administrative reports for violation of quarantine rules, while they issued 11,044 fines for not wearing masks or respirators. The police reported that they also issued 1,095 violations to local businesses and 136 businesses were closed for various quarantine related violations.

“Some entrepreneurs who do not respond to the ban on working during the lockdown deserve special attention,” said the head of the national police, Ihor Klymenko. “If you think you are the craftiest, you are wrong. The police record all your violations,” Mr. Klymenko wrote in a Facebook post.

“Thank you to the concerned citizens who inform us about the work of leisure, food and trade facilities. Every day more than 1,200 raid groups check the observance of quarantine requirements by business entities. But sometimes we don’t have time everywhere, so public help is vital,” Mr. Klymenko said.

According to the plan, “the minimum required monthly number of vaccinations should be established, the sources and terms of vaccine supply for coronavirus prevention should be determined and the people responsible for implementing the plan need to be identified, with the ultimate goal of vaccinating the majority of adults in Ukraine no later than December 2021 to develop collective coronavirus immunity.”

On April 6, Ukraine signed an agreement with the American pharmaceutical corporation Pfizer for a supply of 10 million doses of the vaccine against COVID-19, which was agreed on in February by Mr. Zelenskyy and Pfizer CEO Albert Bourla.

“Today is a very important day for Ukraine and Ukrainians – today we have finally signed an important contract with Pfizer for the supply of 10 million doses of Pfizer vaccine. It was challenging to do, but Pfizer CEO Albert Bourla promised to do everything possible and impossible. And he did it,” Mr. Zelenskyy said.