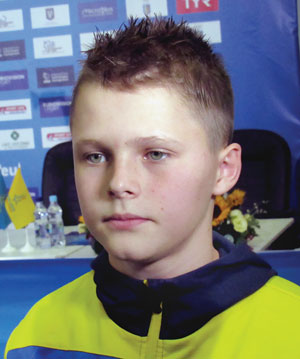 Oleksiy Sereda, a 15-year-old from Ukraine, won the gold medal at the 2019 European Diving Championships.

Ukraine’s performances in the previous three Summer Olympic Games have been on a downward trend: 22 medals (seven gold) in Beijing (2008) with 243 participating athletes, 19 medals (five gold) in London (2012) among 238 athletes, and 11 medals (two gold) in Rio de Janeiro (2016) with 203 Ukrainian Olympians. Hopes of reversing the above trend will be quite challenging in Tokyo with Ukraine sending 155 athletes to compete in 22 sports. Granted, the postponed 2020 Summer Olympics will be seriously impacted by the COVID-19 pandemic, which may or may not even the playing field for smaller, under-funded nations like Ukraine. All things considered, it will be a major achievement for the Games to play out, and a significant positive for Ukraine to actively participate, regardless of the total medal count.

Oleksiy Sereda, a 15-year-old from Ukraine, won the gold medal at the 2019 European Diving Championships.

Ukraine has enjoyed past Summer Olympics success in gymnastics, canoeing, fencing and athletics. In the last two Olympics, Team Ukraine athletes have won five medals in canoeing and four in fencing. Gymnastics, both men’s and women’s, were a strength in 2016, while athletics were a highlight in 2012, with Ukraine winning three medals in each sport. 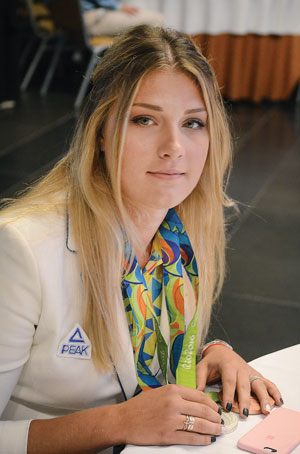 Prior medalists Olha Kharlan (fencing) and Zhan Beleniuk (Greco-Roman wrestling) return for yet another Olympiad and will rank as favorites in their events. Shooting ace Serhiy Kulish is another hopeful returnee in his respective discipline. Yuriy Cheban has retired from canoeing and Anna Rizetdinova became a mother in 2017, likewise retiring.

Gymnast Oleh Verniaiev has been banned from gymnastics competition for four years following a failed drug test. He won gold and silver at the 2016 Summer Games and will be missed. The hope is that Team Ukraine will surprise with a few young first-time Olympians who have undergone aggressive training and demonstrated their potential in European and world competitions over the past five years.

Ukrainian divers on board with Olympic form
Team Ukraine arrives in Tokyo with a respectable squad of seven divers, three men and four women. Here is a “Speedo” look at four Ukrainian Olympians:

Oleh Kolodiy – The 28-year-old specializes in synchronized diving off 1-meter and 3-meter springboards. He has won a total of 8 medals in international competitions: one gold, two silver, five bronze. The gold was the team competition in Glasgow (2018) at the European Championships. Oleh began diving at age 12 in his home town of Mykolaiv, Ukraine.

Sofiya Lyskun – She is 19 years young, from Luhansk, Ukraine. One of her two gold medals was won with Oleh Kolodiy in the team event at the 2018 European Cham­pionships. At this event she gained fame for a difficult dive of a back two-and-a-half somersaults and one-and-a-half twists in a pike position off a 10-meter board which earned her the highest final round mark of any diver. In her brief diving career she has earned six medals: two gold, a silver and three bronze (includes Summer Youth Olympics).

Oleksiy Sereda – The 15-year-old made his Ukrainian national debut in 2019 at the age of 13. He placed fourth in both individual and synchronized dives on 10-meter platform, resulting in Olympics qualification. Sereda became the youngest ever European champion in August 2019, after winning gold in the individual platform at the 2019 European Diving Championships. He also won a silver medal in synchronized diving with his partner Oleh Serbin. The two will be partnered at the Tokyo Olympics.

Kseniya Baylo – The 16-year-old won a gold medal in the mixed 10-meter platform synchronized event at the 2020 European Aquatics Championships in Budapest, Hungary, in May. Baylo and Lyskun also won a bronze medal in the women’s 10-meter synchronized platform event in Budapest. Kseniya was born in Mykolaiv, Ukraine.

Wrestlers hope to pin down a few medals
A very formidable team of 10 Ukrainian wrestlers (five men, five women) are realistically expecting to return home with a couple of Olympic medals. Here is a “takedown” on four Ukrainian Olympians:

Iryna Koliadenko – The 22-year-old won a gold medal at the European Wrest­ling Championships in April, winning the 62 kg event. She has won a total of five medals in international competitions: one gold, one silver and three bronze. Her silver medal came at the 2019 World Champion­ships held in Kazakhstan (65 kg event).

Vasyl Mykhailov – The 25-year-old qualified at the World Qualification Tourna­ment to represent his native Ukraine at the Summer Olympics in Tokyo. He has won five bronze medals in 70 kg, 74 kg and 79 kg events: European U-23, World U-23, World Beach Games, Individual World Cup and European Champion­ships. He weighs 175 pounds and prefers the 74 kg weight class.

Lenur Temirov – Thirty-one-year-old Lenur is a Crimean Tatar amateur Greco-Roman wrestler who competes in the men’s lightweight category for Ukraine. He was the 2018 World Championship bronze medalist, and a bronze medal winner at the European Championships in both 2019 and 2020. He lost his qualifying round match in the men’s 60 kg event at the 2012 Summer Olympics in London, representing his adopted nation Ukraine.

Kharlan inspires Barbie doll
In March 2020, Ukrainian Olympic champion and world-renowned fencer Olha Kharlan had a “Shero” Barbie doll created in her likeness as part of an effort to raise awareness of female role models in the world of sports. In an attempt to broaden their product base, the popular brand developed a line of dolls celebrating famous sportswomen. The toy company released the newly designed dolls in honor of International Women’s Day on March 8, 2020.

“When I was little, I always dreamed to have a Barbie doll. And I was like most girls. But I couldn’t even think I would once become a Barbie doll myself! It’s crazy to be able to motivate the legendary Barbie brand to create this cutie,” Kharlan wrote on Instagram in early March 2020.

Kharlan’s doll is wearing the classic white fencing outfit and holds a sabre and a helmet, which is painted in Ukraine’s national colors of blue and yellow.