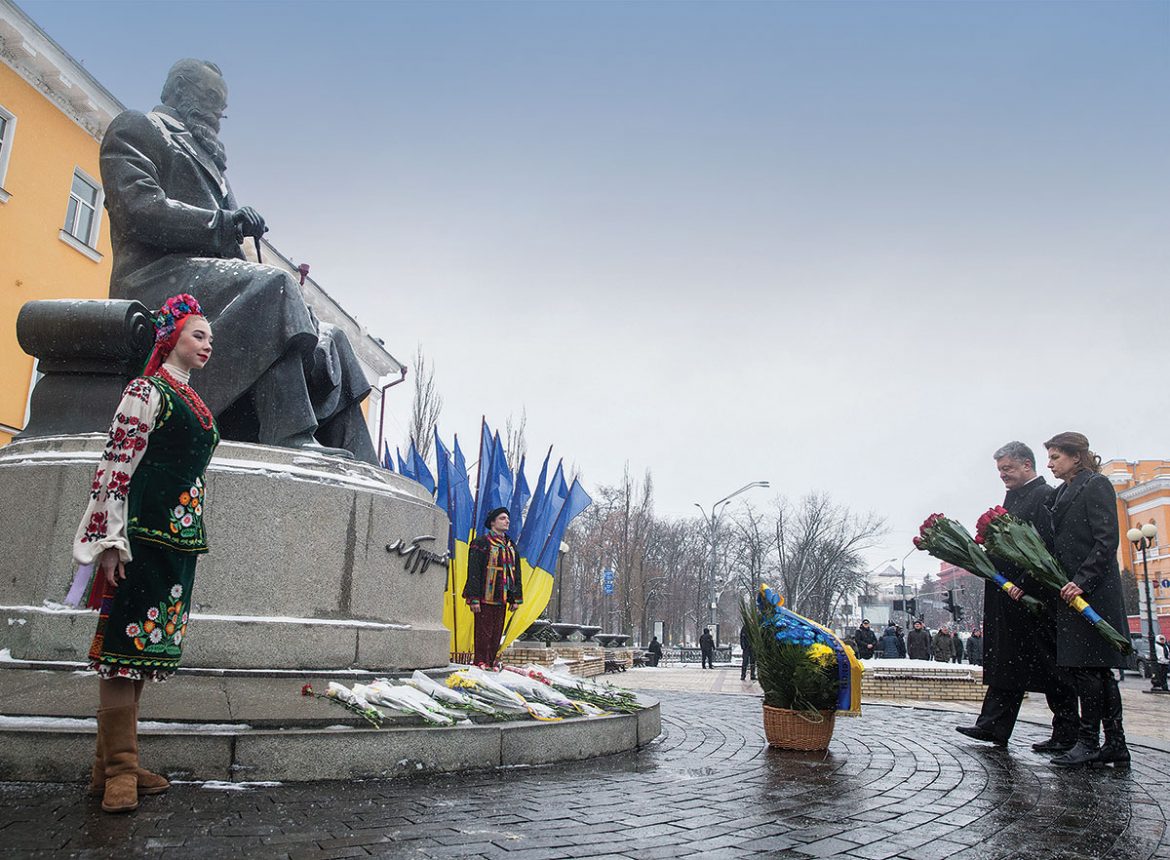 KYIV – Ukraine’s ages-long pursuit of stable statehood came into focus on January 22, when the country commemorated the Act of Unity proclaimed 99 years ago between Ukrainian lands that were part of the Austro-Hungarian and tsarist Russian empires.

Significantly, a year earlier on January 22, the UNR had declared independence as a sovereign state, soon thereafter adopting the tryzub, or trident, as the state emblem, the current national anthem and the blue-and-yellow flag. The centennial of the independence proclamation is being marked this year by Ukrainians around the globe.

Customarily on the national holiday known as Ukraine’s Day of Unity, human chains are formed nationwide to celebrate the union of all Ukrainian lands, and there was no shortage of augmented events to serve the same purpose this year.

Kyiv’s Paton Bridge was the site used to symbolically connect both banks of the Dnipro River, the country’s longest waterway. Later in the day, activists in the city center unveiled a one-kilometer-long Ukrainian flag bearing the names of each oblast that was registered with the local chapter of the Guinness Book of World Records as the longest hand-made flag. 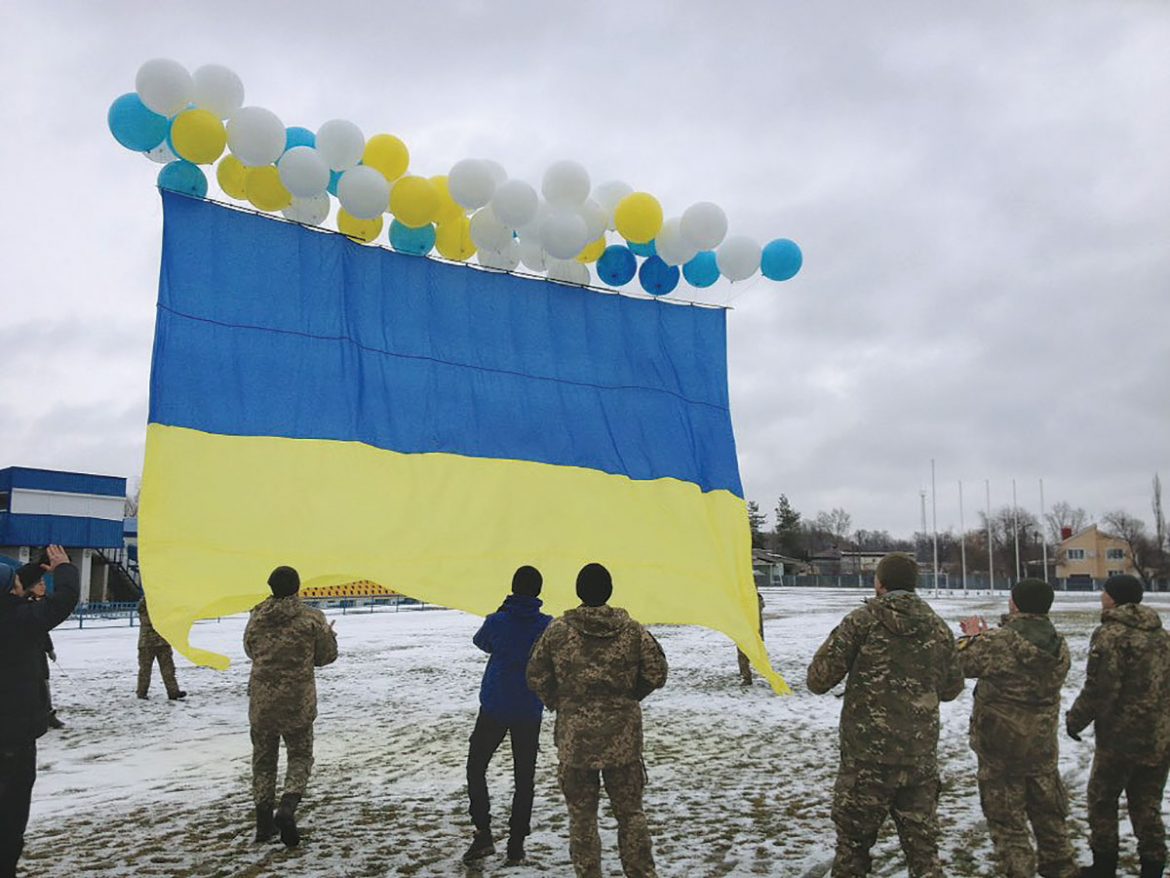 Internally displaced people in Stanytsia Luhanska, 15 kilometers outside Russian-occupied Luhansk, release a Ukrainian flag tied to helium balloons towards the city on January 22 to mark Ukraine’s Day of Unity.

In Stanytsia Luhanska, 15 kilometers outside Russian-occupied Luhansk, a group of displaced Donbas residents floated a Ukrainian flag towards the city tied to blue and yellow helium-filled balloons.

A solemn mood prevailed in Ivano-Frankivsk, the regional capital based in the foothills of the Carpathians. Activists marched from the Oblast Administration building to the memorial dedicated to the founders of the WUNR without fanfare.

“Clearly we feel this holiday in a different way when the Muscovite-Ukraine war persists,” said Ivano-Frankivsk Mayor Ruslan Martsinkiv, as cited by Halytsky Korrespondent. “Unity is not only about an act of joining together, it’s about bringing together all Ukrainians from the Sian [River] to the Caucasus, and this fight is ongoing. It’s paramount that we work together for the sake of keeping Ukraine unified.”

Back in Kyiv, at an event marking the twin anniversaries of January 22, President Petro Poroshenko gave a 20-minute speech in which he compared the events during the nation’s short-lived statehood of 1917-1921 to Ukraine’s current situation.

In that span, control over Kyiv “changed hands more than 10 times until it finally went to the Kremlin for 71 whole years,” the president noted.

Like today, Russia used information warfare to its fullest advantage, Mr. Poroshenko said. The former UNR Prime Minister “Isaak Mazepa wrote that the Bolsheviks were right when they boasted having conquered [Ukraine] not so much with military force, but with ‘the might of their propaganda among the disoriented Ukrainian masses,’ ” Mr. Poroshenko explained.

He asked rhetorically: “For us now, is it not important to find a way to counteract the spread of Russian fake [news] in the Ukrainian information space?”

But unlike at the time of the UNR, Ukraine today is more united, has a strong army and the support of “international partners to withstand the aggressor… and this is the principal, positive difference in the current situation from what existed 100 years ago,” the president added.

Mr. Poroshenko concluded: “We must overcome the external aggression, build a European Ukraine, and pass it down to the safe hands of our children and grandchildren.” 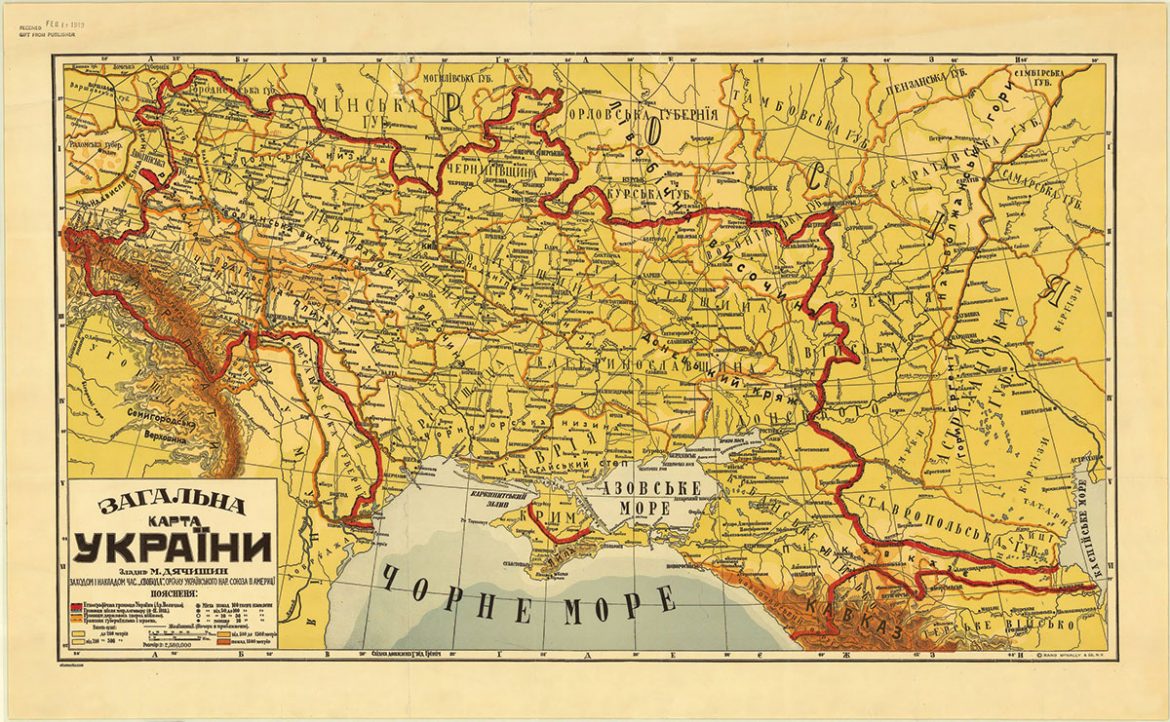 Moscow’s aggression continued to be felt that very day, as the military headquarters announced that one Ukrainian soldier was killed near the Luhansk Oblast town of Troyitske. By January 24, this year’s military death toll had risen to 13.

Russian-commanded and -controlled forces occupy more than 7 percent of Ukraine’s territory in an unprovoked war that has killed more than 10,330 lives and displaced up to 2 million people – the largest internal migration of people in Europe since World War II.

Aside from leaving behind the legacies of Ukraine’s national symbols – the national anthem, the coat of arms and the national flag – the Ukrainian National Republic established the governing institutions upon which Ukraine is still building, said Volodymyr Viatrovych, head of the government-run Ukrainian Institute of National Memory. 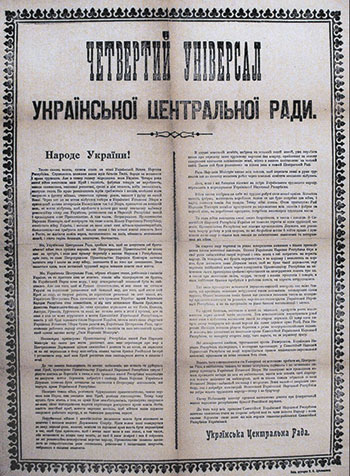 The Fourth Universal of 1918 that declared independence.

He said those institutions – starting from the legislature and extending to cultural and film-making centers as well as Ukrainian educational institutions – “were all eventually destroyed by the Bolsheviks.” In a phone interview with The Ukrainian Weekly on January 24, he emphasized: “Yet UNR’s spirit inspired attempts to re-establish independence: in the inter-war period, marked by the emergence of the Organization of Ukrainian Nationalists, the armed resistance of the Ukrainian Insurgent Army during and after World War II, and by the dissidents at the height of the USSR’s rule, up to the 1980s when the Rukh movement emerged.”

Another long-term perspective was given by Serhii Plokhii, director of the Ukrainian Research Institute at Harvard University. 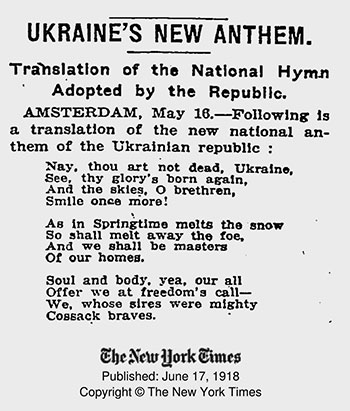 Ukraine’s national anthem, as translated by The New York Times in 1918.

Speaking to Radio Liberty on January 23, he said: “During the 20th century, in Ukraine, independence was declared five times. But only the fifth time in 1991 was successful. And a stable Ukrainian state was formed that given [Russia’s] war, independence has withstood. But the intellectual genesis of this state, of course, is in January 1918, and this intellectual momentum remained throughout the 20th century… And in this sense… Ukraine of 1991 is a continuation of the act of 1918.”

Disgraced ex-President Viktor Yanukovych had cancelled the official commemoration of Day of Unity on December 30, 2011, with a decree. His successor, Mr. Poroshenko, reversed the decision on November 13, 2014, with his own presidential order.