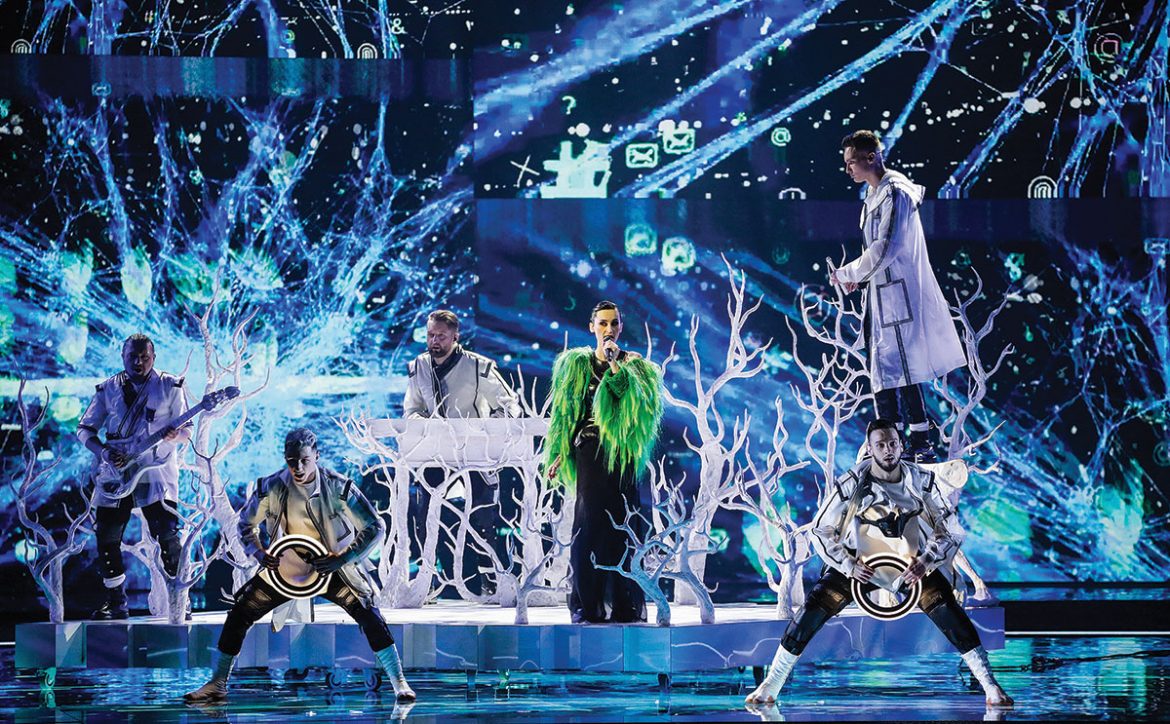 The Ukrainian band Go_A performed at the Grand Final of the Eurovision Song Contest 2021 held in Rotterdam.

KYIV – The electro-folk band Go_A took fifth place at Eurovision 2021 out of 33 participating countries. This was the first time that Ukraine’s entry had sung entirely in Ukrainian. The music contest was held in Rotterdam, Netherlands, between May 18 and 22.

The noise of the Ukrainian performance continued after the song contest ended. Shum was released in more than nine countries and has made the iTunes, Apple Music and Spotify charts. As of May 25, Shum was in the top 10 of the iTunes world song rankings at eighth place. It was at fifth place among European songs.

The song also leads the Viral Spotify global chart and is ranked 69th in the top 200 most popular songs on the digital platform. The Eurovision winning song Zitti E Buoni of the band Maneskin was at fourth place in the Spotify ranking.

The leader of the Italian rock band, Damiano David, said that he supported Ukraine during the song contest.

“Ukraine[’s performance was] unbelievable,” he said at a press conference.

After the song contest, winners of Eurovision met with members of Go_A and asked the frontwoman, Kateryna Pavlenko, to teach them the Shum song. After a few tries, Damiano David managed to pronounce “Zapletimo shuma.”

Many in Ukraine and abroad said that such a low result from the jury for Ukraine was unfair or even politically motivated.

International journalist Serhiy Sydorenko noted that the Ukrainian-language song at Eurovision had become a “test” for countries for which the Slavic language is the primary language. Poland, Moldova, Russia, the Czech Republic, Croatia, Serbia, Slovenia, Bulgaria and Northern Macedonia gave Ukraine zero points. However, the results of voting from spectators in these countries were often the opposite.

“Yes, of course, it’s just a song contest, no politics,” Mr. Sydorenko said ironically.
Ms. Pavlenko said that Shum (noise in Ukrainian) is based on a round dance and a game of the same name. Shum is an ancient Ukrainian spring song, which dates back to pre-Christian times and rituals related to nature.

Folklorists have been studying it for many years. Borys Hrinchenko and famed Ukrainian historian Mykhailo Hrushevsky wrote about Shum. As Lydia Kozar, candidate of philological sciences, wrote in an article on spring rituals, in such dances and spring songs as Shum, “features of an animistic worldview” have been preserved.

Animism is the belief that all objects, as well as animals and plants, have a soul. The concept derives from ancient traditions and beliefs. Later, those ideas took shape in various pagan cults and later disappeared or were revised under Christian influence.

Ethnographer Valeriy Voitovych in the book “Myths and Legends of Ancient Ukraine,” notes that “Noise” is an appeal to the god of the forest Noise (or Noisy) to wake up nature in the spring. In some south Slavic languages, including Serbian, the word “shum” still means forest.

Frequent repetitions in the text of words with the Ukrainian letter “sh” originate from magic spells, for example, to make trees bloom faster. Much later, already in Christian times, the spring song “Noise” included a round dance performed on Easter. At the same time, according to Mr. Hrushevskyy, “humorous parody rhymes” were added to the song when “the round dance went down to simple fun.”

“The basis of this song is a rite that Ukrainians performed in the spring: they called for spring with noise. It was all done collectively. It was believed that if we did something together, the common desire would come true,” Ms. Pavlenko told Focus magazine.

“All Ukrainian rituals are based on the fact that people gathered together and believed that songs have magical powers. In particular, the call of spring was an essential ritual. People went out, sang and thus they believed that spring would come sooner,” she said during an interview with Radio NV.

Ms. Pavlenko also noted that all this is the belief of Ukrainian Polissya.

“This year, I went very deep into the rituals of Chornobyl Polissya and Polissya in general. There were completely different rites and even different beliefs among Ukrainians. It was exciting. They gave magical powers to each subject that they surrounded, and they believed that the noise is the spirit of the forest,” Ms. Pavlenko said.

In an interview with the Ukrainian national broadcaster, Ms. Pavlenko said that she had to learn to sing anew after a part of her lungs was removed. She underwent two operations to remove a tumor in her lungs.

“My sound isn’t formed in my lungs nor my bronchi as there is not much space there. Especially, this concerns high notes. It vibrates somewhere in me; I don’t know how it gets there. You can hear me gasping it all the time. There’s a charm to it because you can hear me gasping, though I have no problem at all with this manner of singing. I can take a note and sustain it for a very long time, and I don’t even know how it works,” Ms. Pavlenko said.

Go_A was chosen from Ukraine to participate in Eurovision in 2020 when the musicians performed the song “Nightingale.” However, due to the coronavirus pandemic, the competition could not be held.

The organizers of Eurovision decided that in 2021 they would not allow old songs. At the same time, each country decided whether to leave in place competitors who were already qualified for the contest or conduct a new selection.

Martin Österdahl, the executive supervisor of the Eurovision Song Contest, said that, “We made it our mission to bring back the world’s largest live music event this year despite all the challenges posed by the pandemic, and we couldn’t be happier with, and more grateful for, the incredible work [all the organizers] have invested over the past two years.”

Approximately 6,000 people helped produce this year’s contest. A strict health and safety protocol included mandatory social distancing, mask-wearing, and regular COVID-19 tests for all attendees. Over 26,000 tests were conducted for the crew, delegations, volunteers and press throughout the event.

Since making its debut in 2003, Ukraine has participated in Eurovision 16 times. Ukraine has won the contest twice: in 2004 with “Wild Dances” by Ruslana and in 2016 with the song “1944” by Jamala, thus becoming the first Eastern European country to win the contest twice. Ukraine hosted the 2005 and 2017 contests in Kyiv. Only Ukraine has qualified for the semi-finals every year. Australia had also previously qualified for every semifinal, but it did not make the cut in 2021.