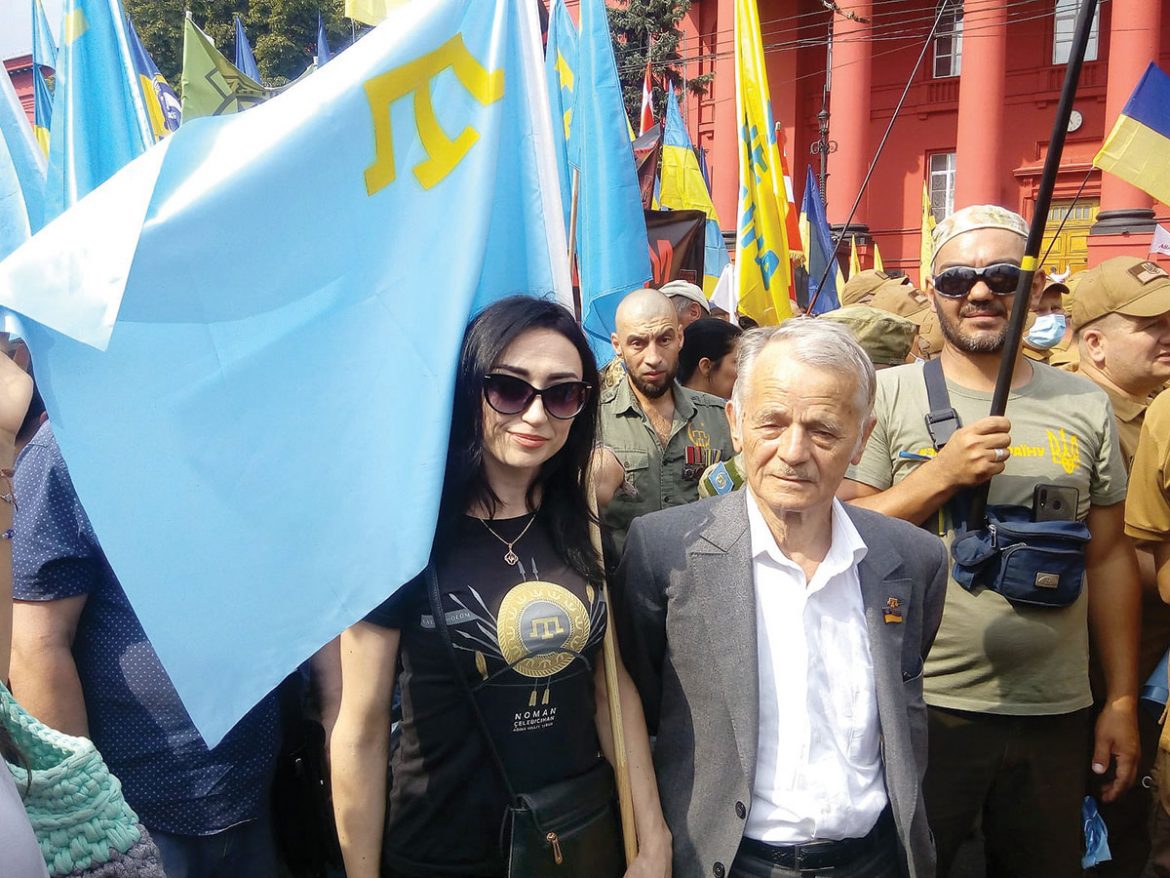 Crimea Tatar leader Mustafa Dzhemilev (front, wearing jacket) and activist Enver Bekirov (right) on August 26, 2020, stood next to their people’s sky-blue flag that includes a golden tamga, which symbolizes balance and equal rights for all people.

KYIV – Ukraine is jumpstarting a new diplomatic initiative to muster international support for efforts to end Russia’s occupation of the Crimean Peninsula on the eve of the 30th anniversary of its renewed independence.

Called the Crimean Platform, it is designed to coordinate an international response to Russian occupation and pressure Moscow to relinquish its claim on Ukraine’s peninsula following its forcible seizure in early 2014 while getting Russia to the negotiation table.
The Kremlin has defended its takeover of Ukraine’s peninsula as “historical justice.”

Moscow also has kept the violation of international law off the agenda of the so-called Normandy Format talks between it, Kyiv, Berlin and Paris on ending the war in the two easternmost regions of Ukraine where Russian armed formations still wage a war that has resulted in the death of 14,000 people.

“It will be an unprecedented international event… Never before have so many states gathered in Ukraine to hold such an event at the level of presidents, prime ministers and parliamentarians,” Mr. Kuleba said.

His press service said on July 29 that nearly “180 Ukrainian and foreign experts from 33 countries” have also confirmed their attendance.

“The liberation of Crimea is a historical task of the Ukrainian state,” the foreign affairs minister was quoted as saying. “Crimea must be constantly present in the expert and scientific thought of the world … I am convinced that…the Crimean Platform is a real mechanism that will have long-term consequences for Ukraine and the world.”

Acting U.S. Ambassador to Ukraine, Charge d’Affaires George Kent, has told local media that neither U.S. President Joe Biden nor Vice President Kamala Harris would attend the August 23 event. Instead, a Cabinet-level member will be present, he added.

Crimean Tatar leader and lawmaker Mustafa Dzhemilev has told local media that Transport Secretary Pete Buttigieg will represent the U.S. The Ukrainian Weekly could not verify that information with the U.S. State Department by the newspaper’s deadline.

Russia’s KGB-successor agency, the Federal Security Service (FSB), has barred the 77-year-old Crimean Tatar from returning to his homeland until 2034.

Ukrainian President Volodymyr Zelens­kyy announced the start of the initiative on October 20.

Since Russia illegally annexed the peninsula, the United Nations, rights groups and Western governments have decried what they describe as a campaign of oppression that targets ethnic Ukrainians and members of the Turkic-speaking Crimean Tatar minority, as well as others who opposed Moscow’s occupation.

Arbitrary arrests and disappearances are not uncommon, in particular among the Crimean Tatars, the majority of whom oppose Russian rule.

UN Secretary General Antonio Guterres released an interim report on the situation in Crimea on May 27 in which he called “upon the Russian Federation to uphold its obligations under international human rights law and international humanitarian law in Crimea.”

In particular, he said, “the Russian authorities are required to comply fully with the absolute prohibition of torture and ensure the independent, impartial and effective investigation of all allegations of ill-treatment, torture, arbitrary arrest and detention in Crimea.”

Despite being sanctioned by the European Union, the U.S., Canada, as well as other countries, Moscow has not altered its behavior on the peninsula and the Ukrainian military has reported that it has become heavily militarized.

Still, questions linger regarding the extent to which the indigenous people of Crimea will be given a seat at the table during the Crimean Platform event, said Enver Bekirov, a displaced Crimean Tatar who lives in Lviv.

The activist said he has “big hopes” that the event might get Russia to start talking about illegal annexation, but he also questions “to what extent will we be included.”

Mr. Bekirov said that he realizes that since this is the first such event, the platform will mostly “end with declarations…but maybe it could become something bigger” because “Russia refuses to talk about Crimea” internationally.