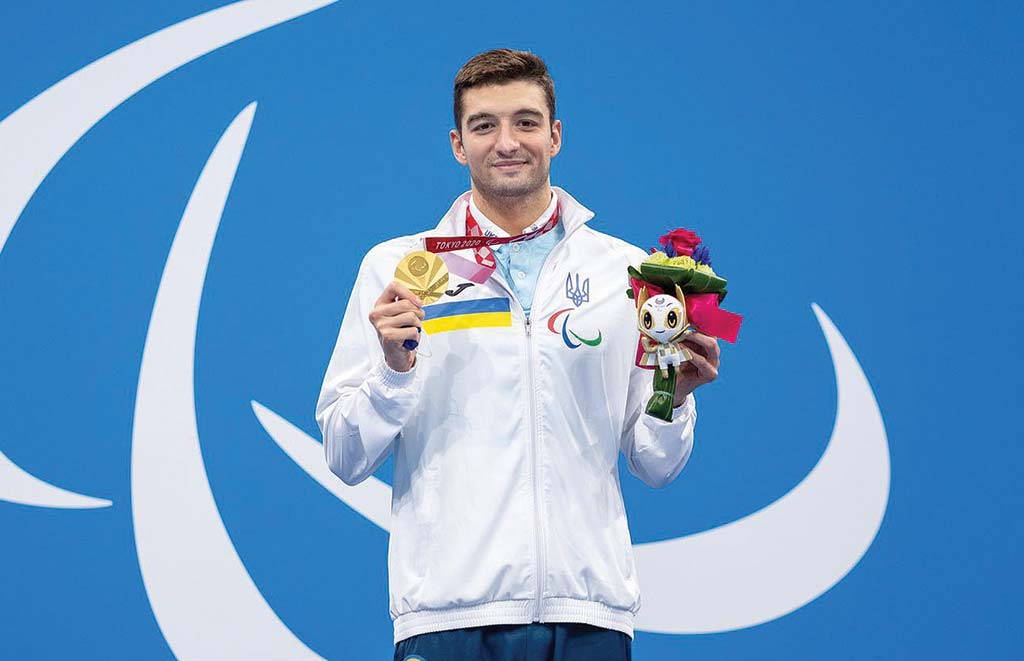 Seventy-four medals in 2008, 84 in 2012, and 117 in 2016 set the foundation that Ukraine is indeed a world Paralympics powerhouse. Expectations were high going into the 2020 Games in Tokyo despite the challenges and obstacles posed by the one-year delay on training and the COVID-19 pandemic. Taking a cue from the Ukrainian Olympic team’s performance earlier this summer when expectations were exceeded, the Paralympians continued their dominance with their own outstanding achievements. Team Ukraine won an astounding 98 total medals, including 24 gold, 47 silver, and 27 bronze, placing them fifth among all nations (Ukraine ranked sixth overall when ranked by gold medal victories.) They were second overall in silver medals. The four nations that finished ahead of Ukraine with more total medals were China, Great Britain, the Refugee Paralympics Team and the United States.

By sport, swimming continued to be Ukraine’s top sport with 43 medals won in aquatics competitions. Twenty-four were won in athletics and six each in shooting and wheelchair fencing. Ukraine won 14 gold medals in swimming and six in athletics. Individually, Maksym Krypak was the most decorated athlete at these Paralym­pics, earning seven medals in swimming, five of which were golds. Swimmer Yelyzaveta Mereshko made the podium five times, winning a pair of gold medals. Swimmer Andriy Trusov defeated his competition five times with two golds. Team Ukraine set six new world records: four in swimming and two in athletics.

Below are Ukrainian medalists and highlights from the final four days of competition at the 2020 Paralympic Games. 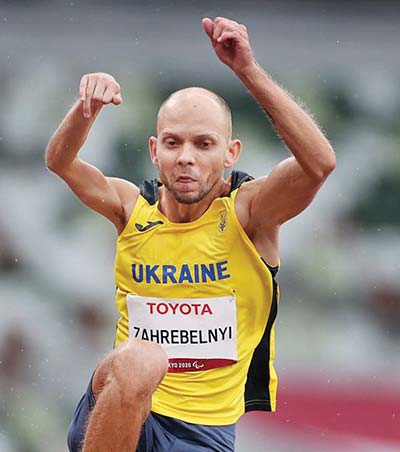 Long-jumper Vladyslav Zahrebelnyi (T37) attempts a jump, one of which won him a gold medal with a distance of 6.59 meters.

Day Nine – Krypak won his ninth Paralympic gold of his career and smashed his own world record in the men’s 100-meter backstroke (S10). The 26-year-old defended the title he won in Rio in 2016 by setting a blistering pace from the start, hitting the wall in 57.19 seconds, eclipsing his previous world record of 57.24 seconds. The gold was Krypak’s fourth of these Paralympic Games – he has also won a silver and bronze – to bring his tally to 14 Paralympic medals in total – with one event still to swim. His overall impressive portfolio includes five world and 10 European titles. Two other Ukrainians won gold medals on this day, Maria Pomazan in the women’s shot put (F35, 12.24 meters) and Vladyslav Zahrebelnyi in the men’s long jump (T37, 6.59 meters). The four silver medalists were Oksana Boturchuk (women’s 100-meter T12 race), Yelyzaveta Mereshko (her fifth medal, this one in women’s 400-meter freestyle swim), Anton Kol (men’s 50-meter backstroke), and Team Ukraine, comprised of Viktor Didukh and Maksym Nikolenko in men’s table tennis (Class 8). Bronze medal winners were Oleksii Denysiuk (mixed 25-meter pistol SH1 shooting) and Denys Ostapchenko (men’s 50-meter freestyle swimming). For the day, Ukraine won four more medals in swimming and three in athletics. 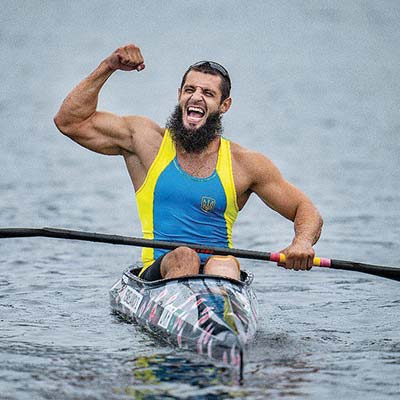 Day 11 – Another four medals were won on the next to last day, with three silvers and a bronze. Ihor Tsvietov added a second silver to his collection, triumphing in the men’s 200-meter (T35) race, Maryna Mazhula won silver in the women’s kayak single 200-meter (KL1) canoe sprint, Oksana Boturchuk won a silver (her third of these Paralympic Games) in the women’s 200-meter (T12) race and Vasyl Kovalchuk won his second medal, a bronze, in shooting’s mixed 50-meter rifle prone (SH2) event. Team Ukraine was passed by the United States in the overall standings, dropping to fifth place.

Day 12 – The final day of competition gave Ukraine one final opportunity to gain a podium only to see shooter Iryna Shchetnik finish eighth out of eight with 121.6 points in the mixed 50-meter rifle prone (SH1) final. Ukraine did not participate in the other three sports that had final events on this day.  Those events were sitting volleyball, wheelchair basketball and badminton. In athletics, Ukraine did not have a finalist in marathon racing.