After 10 years of successful work in Israel, Extraordinary and Plenipotentiary Ambassador of Ukraine Hennadiy Nadolenko has left Israel. The period of his work from 2010 to 2020 coincided with the terms in office of three Ukrainian presidents and numerous turbulent events in the life of both Ukraine and Israel. In October, before his flight back to Kyiv, Mr. Nadolenko gave his final interview as ambassador to Israel to Ukrainian Jewish Encounter.

Mr. Nadolenko, thanks to your length of service in our country, you have become a doyen, the head of the diplomatic corps in Israel. You must have gotten a grand send-off.

I only had time to say goobye to the president [Reuven Rivlin], and I held a small send-off at Israel’s Ministry of Foreign Affairs. I didn’t even manage to say good-bye to many ambassadors whom I know because of the quarantine. 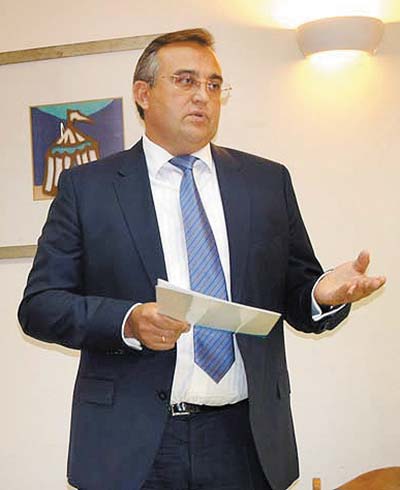 You arrived here with a certain set of knowledge about Israel. Did your ideas about our country change over the last 10 years?

They changed – and for the better. Israel is an eye-opener because of its people and its determination, and the way it is building its economy and international relations. We see that Israel is striving for peace and an improved situation in the Middle East. The development of medicine, start-ups and innovations – all this compels us to learn and apply Israel’s experience at home, in Ukraine.

In all these 10 years we did a lot, so that people would communicate, so that business would develop. Ukraine and Israel have become not just partners but also friends. There is general support in international institutions and in all spheres of business. I think that after the victory over COVID-19, we will become even stronger.

Has Ukraine become better-known in Israel? To what degree is it on the map among the general Israeli public?

I think that Ukraine has made a splash in Israel – and in a positive sense. We hear a lot of positive things about Ukraine in the Israeli media. Much was changed by the cancellation of the visa regime between Ukraine and Israel. This was my first agreement, which I prepared for signing in 2010. At the time, we had 24,000 tourists from each side. But in 2019, 326,000 Israeli tourists visited Ukraine! Israel became the second largest group of tourists to Ukraine. That year 186,000 people from Ukraine traveled to Israel.

This shows how much information Israelis have received about Ukraine. They like traveling there. We hear only positive things from Israeli tourists. Right now, tourism is severely affected, and I am convinced that after restrictions are lifted on flights, a tourist boom between Israel and Ukraine will start up again.

Have Israelis grasped that Ukraine is a separate state?

That is absolutely correct. We also made sure that Ben Gurion Airport is writing and announcing “Kyiv” instead of “Kiev.” Few people confuse Ukraine with the former USSR. This understanding became especially clear after the Maidan and the war in 2014. A wave of support for Ukraine came from groups of volunteers. At the time, we were helped a lot by civic initiatives: Israeli Friends of Ukraine and the Canadian organization Ukrainian Jewish Encounter. Huge thanks to them for the work they were doing then and still now.

In the past 10 years, the dynamics in the relations between Ukraine and Israel have had their ups and downs; they have moved up and down…

I don’t agree. In principle, the dynamics were always upward-moving, despite some crashes. And I am certain that our bilateral relations will continue to develop this way.

Agreed. So, in looking at these dynamics, what do you consider your main achievement as ambassador in the last 10 years? Perhaps, the Israel-Ukraine Free Trade Agreement, which will come into force soon?

I still consider my main achievement to be the cancellation of visas. In 2010 the trade turnover between Ukraine and Israel reached $450 million; in 2011, it was already $900 million. In 2012 it stood at $1.2 billion, and in 2013 – $1.36 billion. There was a threefold jump over a three-year period, and it would have continued if not for the war, which cut 20 percent of the Ukrainian economy and our trade turnover. That is why I regard the cancellation of the visa regime an important event, not only in human terms but also in the economic sphere.

We worked on the Free Trade Agreement for more than seven years. It has been slightly delayed. There remains one outstanding signature: ratification by the government of Israel. But this is impossible without your state budget being passed. Both sides did a huge amount of work. Incidentally, Israel has these types of agreements only with six countries. According to experts, this agreement will double the trade turnover between Ukraine and Israel over three to four years. This year, our trade turnover will drop only by 5 to 7 percent, despite the general economic decline throughout the world.

What does Ukraine export to Israel?

Number one – grain, followed by metals, lumber and agricultural produce. Ukrainian eggs went well. Ukraine helped Israel during Passover in 2020. When there was a shortage of eggs because of the coronavirus, 7 million eggs were quickly imported from Ukraine. We have just submitted a proposal to your government for a broader program to supply Israel with Ukrainian food products.

Our favorite place was the beautiful northern part of Israel. We loved to relax at Lake Kinneret. These beautiful spots will always remain in our memory. We traveled to Eilat and the Dead Sea, and I recommend them to all tourists. And, of course, Jerusalem, which inspires and blesses.

Can you offer some advice to young diplomats on how to remain in your post under three presidents?

In the early and mid-1990s, the first ambassador of the USSR and Russia to Israel was the journalist Aleksandr Bovin. After this posting, he wrote his memoirs titled “Five Years among the Jews and MID-men” [a play on words referring to the Russian term for the Ministry of Foreign Affairs]. Are you ready to write a book titled “Ten Years Among the Jews and Diplomats”?

You know, Bovin was the only ambassador whom the Jewish National Fund inscribed in its Golden Book. And I was the second such ambassador. Recently, I obtained a certificate about this from Ronnie Vinnikov, the deputy of the fund’s general director. In other words, the Jewish National Fund evaluated my Ukraine-Israel work. That’s why I think I will have to write this kind of book.

Was there something unique in Israel that helped you in your diplomatic work?

Some 500,00 to 600,000 natives of Ukraine live here; they are the hidden diplomats of Ukraine in Israel. Each of them transmits a particle of information about Ukraine. And this human exchange will only grow as soon as we beat the pandemic.