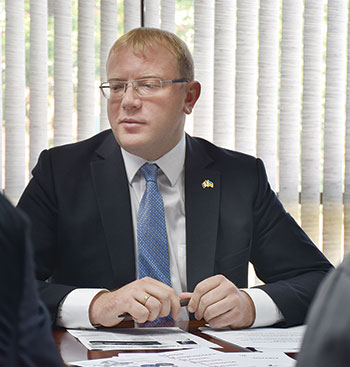 Ambassador Andriy Shevchenko speaks about the significance of the Canada-Ukraine Free Trade Agreement during a media briefing at the Embassy of Ukraine on July 28.

OTTAWA – Since taking up his post as Ukraine’s ambassador to Canada in late 2015, Andriy Shevchenko has spent most of his time with journalists talking to them about Russian aggression in his country.

So when there’s a good-news story, such as the official launch of the Canada-Ukraine Free Trade Agreement (CUFTA) on August 1, the 41-year-old former journalist and Ukrainian national deputy hauled out the wine, cheese and fresh cherries on July 28 for media invited to the Ukrainian Embassy to first hear from the ambassador and officials from both countries about how CUFTA will benefit both – in Ambassador Shevchenko’s words, Canada, “the symbol of the free world,” and Ukraine, “a new frontier of the free world.”

Access to major markets and expertise from both sides of the trade pact are key to CUFTA’s success.

As Canada awaits the final ratification process of its trade agreement with the European Union, which Ukraine already has implemented through its own trade deal with the EU, Canada can now enter a Ukrainian market of some 45 million consumers with a 99.7-percent literacy rate in Europe’s largest country by area. Ukraine encompasses 233,062 square miles, of which over 70 percent is agricultural land, and produces one-third of the world’s black-earth soil (known as chornozem).

With even fewer tariff-related restrictions, Ukraine now has access to the Canadian market of over 36 million consumers, and potentially a lot more through the North American Free Trade Agreement (NAFTA) among Canada, the United States and Mexico, which U.S. President Donald Trump’s administration wants to overhaul. (Ukraine does not have a free trade deal with the U.S. but a Ukrainian company could bring part of a product to Canada, add something to it in Canada and export the final product to the U.S. under the current version of NAFTA.)

CUFTA also provides Ukraine with better conditions for the elimination of tariffs than what Canada enjoys under the agreement. It immediately wipes out 98 percent of duties on Ukrainian agricultural and industrial goods.

Within seven years, almost all tariffs will be dropped when Ukrainian cars will be exempt from Canadian duties. But the rate will never reach 100 percent, since Canada maintains domestic agricultural quotas on some products, such as milk, butter, cheese and eggs.

Canada also will never reach total duty-free access to Ukraine under the new trade deal, which right now eliminates tariffs on 72 percent of such Canadian goods as seafood, grain crops, chocolate, beer and wine, textiles, and iron and steel products. Over the next seven years, Ukrainian duties will drop from a variety of Canadian goods, from meat and motorbikes, to milk and honey to bring the duty-free rate to 99 percent.

Under CUFTA, tariffs will be waived for products delivered through e-commerce. Therefore any books, event tickets, clothing or household goods purchased online from either country will be exempt from customs duties.

Ambassador Shevchenko and Oleh Khavroniuk, Ukraine’s trade commissioner in Canada, hope that CUFTA will result, as is the case with previous free trade agreements Canada has entered into, in a boost in bilateral business within two years of the agreement’s implementation.

Any increase would be welcome, since the current trade picture between Canada and Ukraine is “peanuts,” said Ambassador Shevchenko. 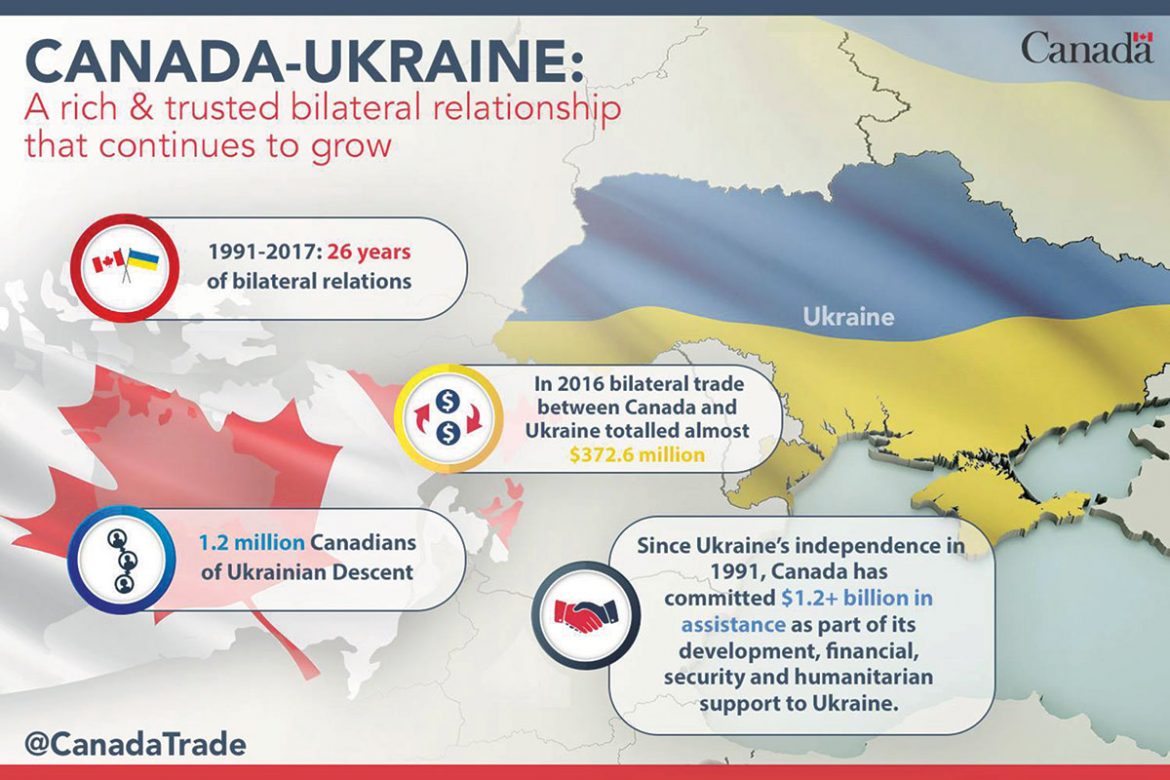 An infographic on Canada-Ukraine relations prepared by the Canadian government.

“Canada is one of the top five under-traded partners with Ukraine,” Ambassador Shevchenko said in an interview.

Also, Ukraine accounts for only 1 percent of total Canadian trade, according to Mr. Khavroniuk.

In light of its recent pact with the EU, Ukraine’s largest trading partner is now a bloc comprising the 28 member states of the European Union, which represents 38 percent of Ukraine’s total trade picture. But what might surprise some is that Ukraine has no bilateral deals with its other major trading partners: India, Russia (which suspended its bilateral agreement in 2016 in retaliation for Ukraine’s deal with the EU), Turkey, Iran and the U.S.

So why pursue a formal trade pact with Canada?

“It’s a major signal of support” from Canada to Ukraine, said Ukraine’s ambassador to Canada.

David Usher, director general for trade negotiations at Global Affairs Canada, who attended the media briefing at the Embassy, said he hopes that CUFTA “will pave the way for long-term security and stability” in Ukraine. (Foreign Affairs Minister Chrystia Freeland, a Ukrainian Canadian, heads the federal Global Affairs department.)

Beyond the tariff relief, CUFTA will make it easier for Ukrainian and Canadian companies to do business in either country.

The agreement provides companies with preferential access to procurement opportunities in both countries. Under the treaty, Canadian companies could bid on Ukrainian government projects as well as those tendered by public enterprises, such as airports, the postal system and public transportation, including rail and subway.

Ukrainian companies will technically be able to do the same in Canada. Although it’s more likely this government-procurement provision will benefit Canadian firms seeking opportunities in Ukraine.

Ambassador Shevchenko noted that about 4,000 government tenders are announced in Ukraine daily, and that the national annual procurement budget is worth nearly $15 billion Canadian (about $12 billion U.S.).

Canadian businesses bidding for contracts in Ukraine will also experience a cleaner process under CUFTA.

The agreement devotes an entire chapter to transparency, and a section outlining measures to combat bribery and corruption by criminalizing such activity.

“If you have Canadian companies competing against Ukrainian companies for a public-procurement contract, there will not be many chances for a Ukrainian bureaucrat to make sure his friend’s firm wins it,” Ambassador Shevchenko said.

He explained that, beyond the legal restrictions contained in CUFTA, the Ukrainian government relies on a state-of-the-art government e-procurement system, called ProZorro and designed in Ukraine, to issue tenders and ensure open access to them in a fair and transparent manner.

“This software is better than what Canada uses,” said Ambassador Shevchenko, who would like CUFTA expanded to also include a chapter on services, such as information and communications technology – a sector that is booming in Ukraine.

In a recent opinion piece in The Globe and Mail, one of Canada’s two English-language national newspapers, Ukraine’s trade representative Nataliya Mykolska, who also serves as deputy minister of economic development and trade, wrote that her country’s software development and IT services industry recorded exports of about $3 billion U.S. last year “and has enjoyed double-digit growth for several years.”

She said there are more than 100,000 certified IT specialists, “third most in the world after the United States and India,” and that by 2020 the number is expected to reach 200,000. The number of women employed in Ukrainian IT companies has also doubled in the past five years.

Of particular interest for Canada is that 12 Ukrainian IT firms are among the world’s top 100 outsourcing companies.

Two major Canadian companies – telecommunications giant Bell Canada and national retail chain Canadian Tire – outsource software design and production to Ukrainian firms. This is being done, as Ambassador Shevchenko noted, in advance of the implementation of CUFTA, and most especially, in the absence of a services chapter in the agreement.

There are other examples of significant pre-CUFTA business activity between Ukraine and Canada.

Two turboprop engines made by Pratt & Whitney Canada will power a new version of Ukraine’s military transport aircraft, the Antonov An-32, which is being jointly developed by Ukraine and Saudi Arabia.

Meanwhile, Canadian beef and lobster already appear on grocery shelves in Lviv and Odesa, according to the ambassador.

“This year, Ukraine became the fourth largest importer of Canadian seafood,” he said. “Who would have thought that?”

Equally interesting is that the Fischer hockey sticks Canadian junior hockey players use are made in western Ukraine.

Mr. Khavroniuk, who also serves as the Ukrainian Embassy’s first secretary for economic issues, will likely share these and other bits of information when he embarks in the fall on a CUFTA promotional tour to several major Canadian cities with representatives from the Canada-Ukraine Trade and Investment Support project that helps Ukrainian small and medium-sized enterprises access the Canadian and other global markets. Global Affairs Canada and Ukraine’s Ministry of Economic Development and Trade are partners in the initiative.

The Canadian and Ukrainian governments have until October 1 to each appoint a representative to administer CUFTA through a joint commission. But the key to the agreement’s success will be the business-to-business contacts made, and particularly the willingness of Canadian entrepreneurs to pursue opportunities in Ukraine despite its continuing hostilities with Russia.

“Obviously, that does not make our life easier, but businesses should make their own judgment on Ukraine,” said Ambassador Shevchenko. “Yes it does require some risk management. But on the other hand, there is nothing to prevent Canadian businesses from becoming involved in great projects in the whole territory of Ukraine.”

Added the ambassador: “Russia tried to stop our negotiations with the European Union, which resulted in the Revolution of Dignity in the Maidan in 2014, but Russia did not succeed. Russia didn’t even try to prevent us from entering a free-trade deal with Canada.”