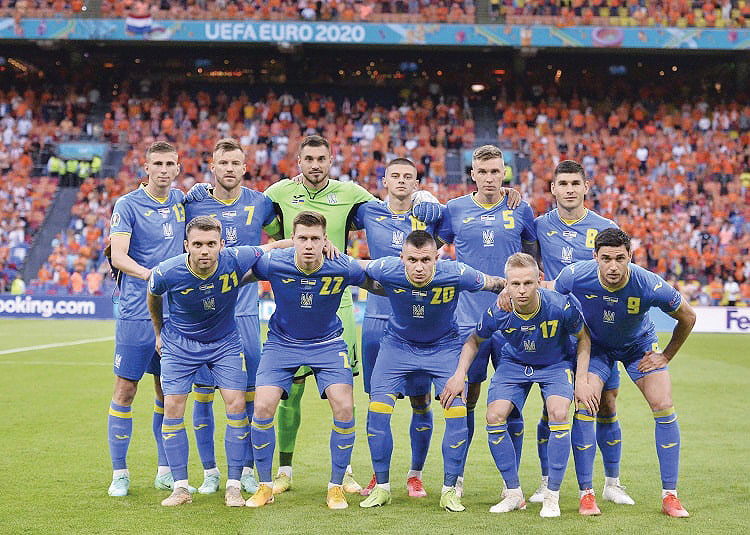 Ukraine’s men’s national soccer team at its Euro 2020 match against the Netherlands in Amsterdam.

SOUTH WINDSOR, Conn. – From the first 70 minutes of action, the Netherlands out-shot, out-hustled and out-played Ukraine. Ahead 2-0 in its opening Group C match of UEFA’s Euro 2020 Championship on June 13, the home team in Amsterdam was cruising toward a one-sided victory over Ukraine, who hadn’t scored a goal in Euro soccer action since 2012. The Dutch team’s total control then abruptly switched to collapse when the underdog Ukrainians tallied two quick goals to even the match at 2-2. A game that seemed comfortably sealed away required some wild saving at the end, and the Netherlands’ eventual 3-2 win left its fans more concerned than triumphant.

Ukraine certainly did not look like the side that finished atop its Euro qualifying group, above powerful Portugal. Represen­ting their country at a time of war, with a map of Ukraine emblazoned on their jerseys as a reminder that they carry the hopes of many beyond recognized borders, coach Andriy Shevchenko’s men did not show much fight for most of the match. Then, within four minutes of the second half, Ukraine threatened to steal the game away.

For much of the encounter, the Ukrainians were bystanders. At halftime, the hosts had more shots inside the box than their opponents had in total. Shevchenko’s squad repelled the ball, getting control and quickly giving it away, without anyone dictating tempo or even holding it up. Meanwhile, the Netherlands mounted an attack only to be thwarted by Ukrainian goalkeeper Georgi Bushchan.

The first breakthrough came at 52 minutes and there was no surprise the celebrations were from the team clad in orange jerseys. Ukraine’s passive approach rolled out the welcome mat for the Dutch to dominate the scoreboard. Georgino Wijnaldum and Wout Weghorst scored rather easily and Netherlands were deservedly up 2-0.

Then out of nowhere, Ukraine came alive. Andriy Yarmolenko played a one-two with Roman Yaremchuk on the right, and then applied his signature move of cutting inside before curling a terrific shot into the top corner from 20 yards. Before the Dutch could even shake off this stunning development, Ruslan Malinovskyi’s free kick was headed in by Yaremchuk to tie the match up at 2-2.

Ukraine tried to keep the pressure on, but Nathan Ake’s cross from the left was met with a downward header from Denzel Dumfries at 85 minutes for a 3-2 Netherlands lead. That was enough to win it. Ukraine’s dramatic comeback fell short, but Shevchenko’s team showed tremendous heart, finally scored goals, showed they belong on the Euro 2020 stage, and must be reckoned with in at least their next two Group C meetings against North Macedonia and Austria.

This match was heralded by many in the media as the most thrilling one so far. Bushchan came through with several spectacular saves for Ukraine in the end-to-end opening period, keeping the game scoreless. Yarmolenko’s 75th-minute goal was described as an absolute work of art (It made ESPN Sports Center’s Top 10 plays of the day, ranking second overall). The ball looped in from outside of the left post before slipping past Dutch goalkeeper Maarten Stekelenburg, into the upper corner and into the back of the net.

Although Ukraine lost in heartbreaking fashion, the soccer world will not forget their furious comeback or Yarmolenko’s sensational strike. The team hopes it has the renewed focus and necessary momentum to bounce back against North Macedonia in its next match.