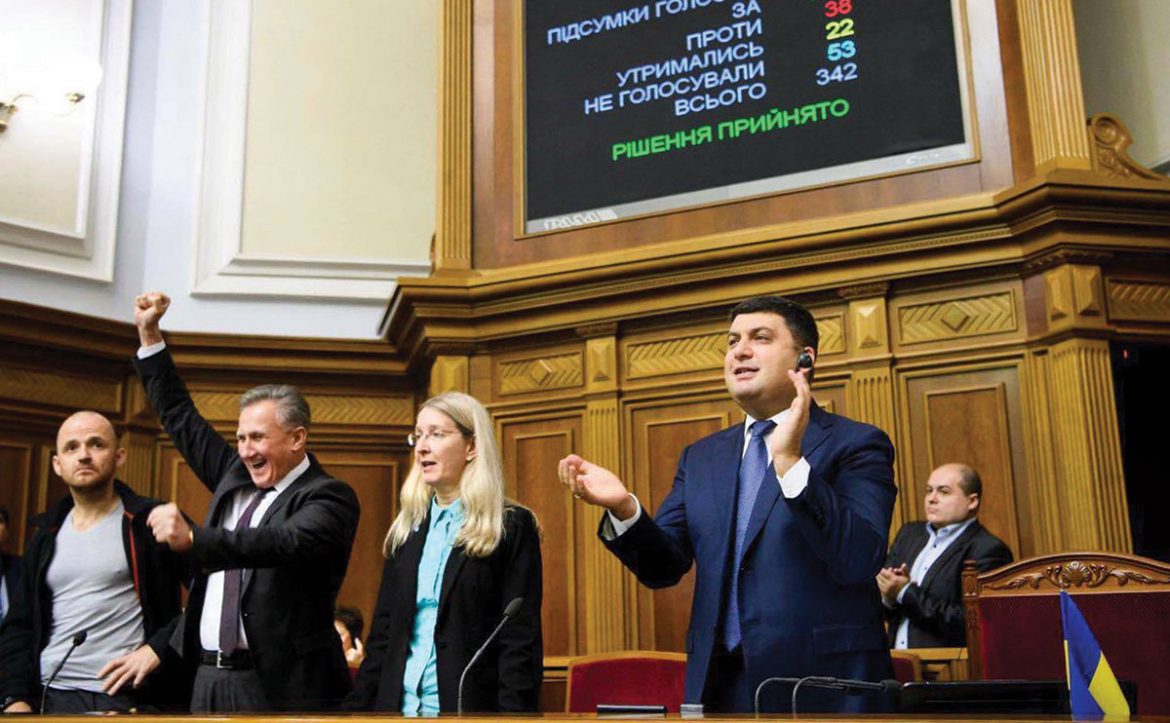 Cabinet of Ministers of Ukraine

Acting Health Minister Ulana Suprun reacts in Ukraine’s Parliament on October 19 after reforms she has pushed to overhaul the nation’s health care system were passed by the legislature.

KYIV – Ukraine adopted a crucial legislative health care package on October 19 that is designed to improve the health of its people and remove Europe’s largest country from the list of nations that have the world’s highest death rates. It is the first comprehensive change to the country’s Soviet-era health care system since Ukraine gained independence in 1991.

The ailing state-run system will, as of January 1, 2018, see “money follow the patient,” according to Health Ministry spokesperson Mariana Zbanatska, instead of having funds being allocated based on the Soviet-era method of counting hospital beds.

“This will improve how the overall health care system operates, provide better access to treatment and introduce standardized pricing for services throughout the country,” she told The Ukrainian Weekly by phone.

The measures essentially follow how the United Kingdom finances its health care system and was backed in its original conception by the World Health Organization and the Group of Seven industrialized democracies.

However, Health Minister Ulana Suprun and her team subsequently lamented that “vested interests” struck out certain accords during the reform bill’s final adoption. Namely, the option of co-payment for certain services and “international protocols” that were penned to update outdated procedures when a patient visits a hospital.

Still, a National Health Care Agency will exist to control quality and determine how medical services are paid in a system that is supposed to be free, in accordance with the Constitution of Ukraine, but currently forces patients to pay even for the most basic of services to save their lives, Ms. Zbanatska said.

Up to 8 percent of the nation’s economy is spent on health care – or 80 billion hrv ($3 billion U.S.), according to data provided by the Health Ministry spokesperson. And Health Minister Suprun, a physician born, reared and trained in the United States, says that 136,000 Ukrainians die yearly – lives a normally functioning medical system would save.

With 15.6 deaths per 1,000 people, Ukraine last year had the third highest death rate in the world after South Africa and Russia, according to the WHO.

Parliament pushed last week to eliminate immunity from prosecution for national deputies. The bill passed in the first of two readings after which it was sent to the Constitutional Court for review as is required by law because it makes changes to the nation’s highest legal document.

President Petro Poroshenko also submitted his draft law for the establishment of an anti-corruption court – a key requirement of the International Monetary Fund for further disbursements to Kyiv – to the Verkhovna Rada. Numerous times in the past two weeks he has voiced hopes to have the parallel anti-graft judicial body created by year’s end.

Alleged Russian cyberattacks yet again struck Ukraine on October 24. This time they paralyzed operations at the Odesa International Airport and electronic ticketing system of Kyiv’s subway, the country’s largest.

Moscow denied any involvement in the attack.

As in July, ransomware was used, according to Ukraine’s Computer Emergency Response Team. A bomb threat at Kyiv’s main railway station on the same day interrupted normal services.

On New Year’s Eve in 2016, the electricity grid of Ivano-Frankivsk Oblast was hacked, also the suspected work of Russia, and early this year power went out in the northern section of Kyiv due to alleged Russian hacking.

Bomb threats are a normal occurrence throughout Ukraine at key transportation and retail infrastructure sites; they too are believed to be conducted by the Kremlin or its proxies. Explosions at four military arms depots have also occurred since the Donbas war started, one of which was set off by an unmanned aerial vehicle, and these were classified as acts of sabotage on the part of Moscow.

Fighting in the easternmost region of the Donbas, where Russia has waged war since April 2014, escalated on October 24. Four Ukrainian servicemen were killed, the Defense Ministry reported. Nine Ukrainian solders have been killed there this month (as of October 25) and 164 since the beginning of the year.

Due to four years of the Russian-instigated war, Ukraine is home to the world’s ninth-largest population of internally displaced people, according to the Atlantic Council, an American policy center. Moscow’s war has caused more than 10,000 deaths and uprooted more than 1.6 million people from their homes.