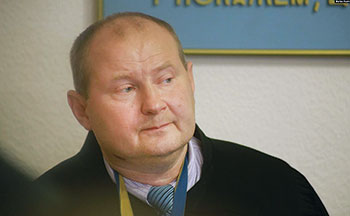 Detectives from the National Anticorrup­tion Bureau of Ukraine (NABU) on August 3 detained former judge Mykola Chaus, accusing him of corruption.

LVIV – Detectives from the National Anti­corruption Bureau of Ukraine (NABU) on August 3 said they detained former Kyiv Dnipro District Judge Mykola Chaus after the Security Service of Ukraine (SBU) alleged that the fugitive justice, whose whereabouts had previously been unknown, contacted them from a village in the west of the country.

Mr. Chaus was placed under 24-hour house arrest by NABU officials on August 4. They fitted him with an electronic tracking device to keep tabs on the judge, who previously fled to Moldova in an attempt to evade justice in Ukraine.

The whereabouts of the fugitive former justice were unknown from April until July 30.

Following his disappearance from Ukraine, Mr. Chaus was subsequently stripped by parliament of prosecutorial immunity and the High Council of Justice disrobed him in October 2017.

Moldovan officials claimed Mr. Chaus was abducted outside a gym in April and taken back across the border into Ukraine, Moldovan Interior Minister Pavel Voicu said on April 5. NABU officials declined to comment on the matter at that time.

There is concern in Ukraine that Mr. Chaus’s case may be used for political purposes, as he is believed to be a valuable asset for Ukrainian special services because as a judge he was privy to sensitive information involving the administration of former Ukrainian president Petro Poroshenko.

Mr. Chaus worked for 15 years in the Dnipro District Court of Kyiv where he was known for passing verdicts against Euro-Maidan activists. He also removed former member of the Party of Regions Yuri Ivanyushchenko from a wanted list and he presided over the trial of Hennadiy Korban, who was an ally of Ukrainian oligarch Ihor Kolomoisky and an adversary of Mr. Poroshenko.

Mr. Korban was involved in a case of kidnapping and theft of property. The hearing lasted 28 hours and included physical conflicts and brawls. During the hearing, Mr. Korban lost consciousness and bottles were thrown at the judge. In the end, Mr. Chaus ruled against Mr. Korban.

In 2016, NABU alleged that Mr. Chaus received a bribe of $150,000, hidden in two glass jars. NABU officials alleged that the money was intended for the “proper sentence” of Svitlana Sasevych, who was accused of drug trafficking. The prosecution asked for seven years in the case. Mr. Chaus sentenced her to five years of probation.

Mr. Chaus, who has been on the international wanted list since November 2017, was wanted by NABU officials, who in March 2017 were ordered by court ruling to arrest the judge as soon as he entered Ukraine.

Moldovan officials denied Mr. Chaus’s request for asylum on March 15 and Ukrainian officials were set to demand his extradition, according to the High Anti-Corruption Court of Ukraine. But the extradition never happened, as Mr. Chaus disappeared on April 3.

At the time, Mr. Chaus’s lawyer said a group of unknown gunmen seized the ex-judge. Later, the Moldovan Ministry of Internal Affairs concluded that Mr. Chaus had been abducted by foreign nationals and taken to Ukraine.

Ukrainian and Moldovan media previously reported that Ukrainian special services, including the SBU, were involved in the abduction. However, on April 7, Ukraine’s Foreign Affairs Minister Dmytro Kuleba denied any involvement by his country in Mr. Chaus’s disappearance.

“My husband came home, then took my children and me to my parents outside the city. The next morning, I called my husband – he did not answer. I came to Kyiv and saw that no one was home. My husband disappeared,” Ms. Chaus said at the time.

She said that the judge was allegedly taken abroad against his will and believed that then-president Petro Poroshenko was involved.

Moldovan Prosecutor General Oleksandr Stoyanoglo previously announced the completion of the investigation into the disappearance of Mr. Chaus. According to Moldovan police, Ukrainian government agencies were involved in Mr. Chaus’s abduction.

Mr. Stoyanoglo said that law enforcement officers in Moldova had identified people from the special services of Ukraine who took part in the abduction. The Investigative Committee of the Moldovan Parliament appealed to the Verkhovna Rada of Ukraine to organize a meeting to discuss the investigation into the judge’s disappearance. Moldovan authorities said Ukrainian officials did not respond to their requests.

In May, Mr. Chaus released a video saying he was safe but did not disclose his location. It is not known whether he recorded the video voluntarily or under pressure. Later, a lawyer for the ex-judge noted that his client had been abused and bedridden for 50 days.

On July 30, a photo of the half-naked former judge went viral on the internet in Ukraine. Four months after Mr. Chaus’s high-profile abduction in Moldova, the judge suddenly appeared in the village of Mazurivka in the Vinnytsia region of western Ukraine. Hungry and nearly without clothes, he came to the building of the Mazurivka village council, according to the chairman of the village council, Valery Hrunkivskyy.

“SBU officers took Mr. Chaus from the police and took him away in an unknown direction,” said Yuriy Butusov, the editor-in-chief of Censor.net and a columnist for the Ukrainian newspaper Dzerkalo Tyzhnia.

On July 30, NABU officials called for Mr. Chaus to be handed over to NABU detectives. The Bureau addressed its appeal to “fellow law enforcement officers” without specifying to whom it was addressed.

Journalists who were at the Security Service building at the time reported that NABU officers stormed the SBU, presumably in search of Mr. Chaus. Denied access to Mr. Chaus, NABU detectives left the scene.

Commenting on the matter, SBU spokesman Artem Dekhtyarenko simply said that, “the SBU is working as usual.”

The following day, the SBU said that the security service “did not kidnap” Mr. Chaus, but they instead “took measures” to ensure his safety.

Mr. Chaus’s lawyer had no contact with their client because the SBU said they did not have Mr. Chaus in custody. After the SBU acknowledged that they had an ex-judge in their custody, Mr. Chaus’s lawyer expressed hope that he would be allowed to see his client.

According to Mr. Butusov, the journalist, the ex-judge agreed to cooperate with the Ukrainian Presidential Office in return for a guarantee that his case be transferred to the SBU from NABU and that he avoids criminal liability for alleged corruption. The SBU is headed by a close friend of Mr. Zelenskyy’s, Ivan Bakanov.