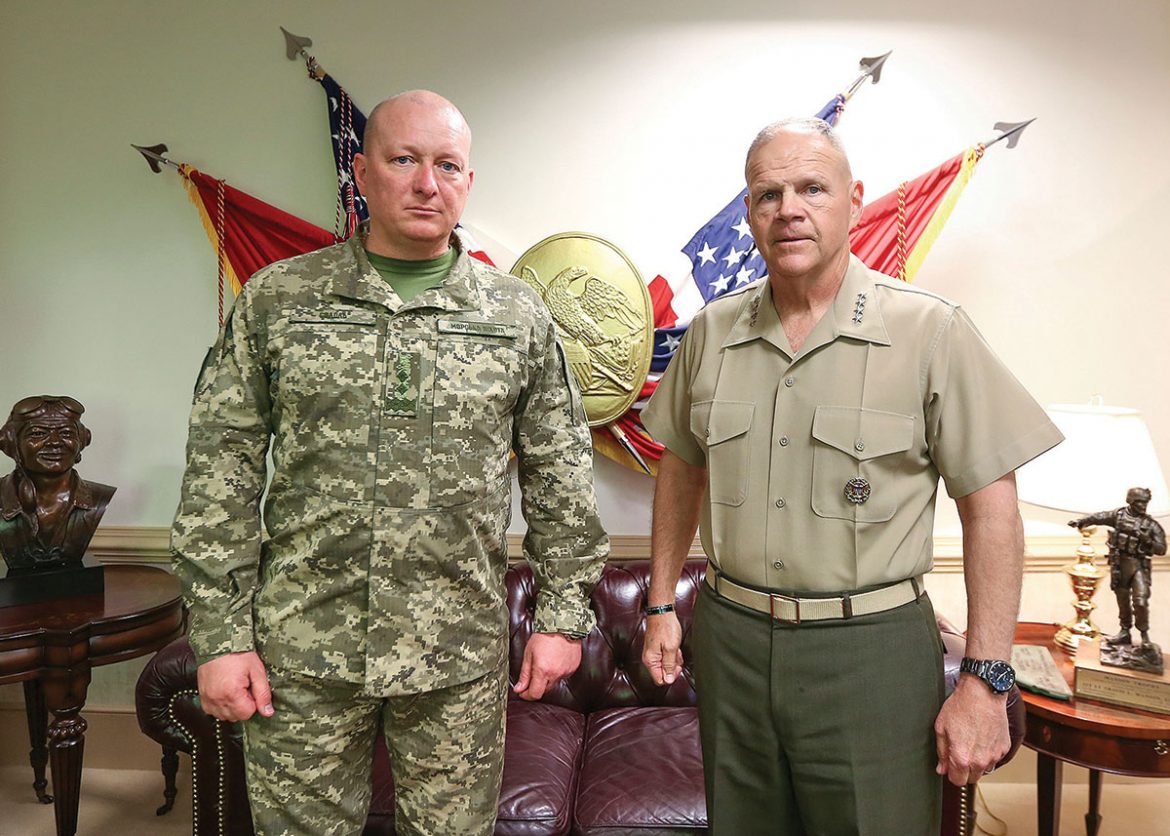 WASHINGTON – Lt. Gen. Yuriy Sodol, commandant of the Ukrainian Marine Infantry, and his small staff came to visit his American counterpart, Gen. Robert B. Neller, commandant of the U.S. Marine Corps (USMC) at the Pentagon on May 13. Thereafter, he embarked on a three-day tour of Marine bases at Quantico (Virginia), Camp Lejeune (North Carolina) and Parris Island (South Carolina) to discuss training methods and expanded security cooperation activities, such as Operation Sea Breeze.

Lt. Gen. Sodol’s primary purpose for the visit with the USMC was to seek support for improved training with USMC mentors/trainers to improve battalion and brigade-level staff training in operations, planning, intelligence, communication and logistics in accordance with NATO standards. Lt. Gen. Sodol was also interested in developing the Ukrainian Marine Corps Professional Military Education (PME) system along USMC lines – to include a progression for Ukrainian Marine Corps officers through a Basic School, Expeditionary Warfare School, and Command and Staff College.

After visiting Parris Island Marine base on May 16, Lt. Gen. Sodol ended his one-week tour with a session on May 17 at the Jamestown Foundation, a Washington think tank devoted to Eurasian policy analysis and political developments. At that session, Lt. Gen. Sodol laid out a list of priority operational equipment needs that would improve his marines’ capabilities in more effectively fighting off Russian forces in the Donbas and the Azov Sea coastal sector.

Lt. Gen. Sodol addressed an influential group of individuals at the foundation, including several former ambassadors from the U.S., Georgia, Poland and Rumania, as well as Nadia and Bob McConnell of the U.S.-Ukraine Foundation. The U.S.-Ukraine Foundation works closely with the Atlantic Council and the Jamestown Foundation and others deeply concerned with Ukraine’s development and ability to counter Russian aggression. The foundation is influential on Capitol Hill and with the Executive Branch through its Friends of Ukraine Network (FOUN) made up of former U.S. ambassadors to Ukraine and Ukraine experts across a broad spectrum of substantive areas.

At the Jamestown meeting, Lt. Gen. Sodol discussed the many difficulties of fighting a hybrid war, as well as recent successes in thwarting various Russian offensives. He noted that, with the increased professionalization of his forces, better equipment and greater tactical and strategic experience, his forces were much more effective in combating the hybrid tactics of the Russians; he was confident that Ukraine’s armed forces were turning the tide.

He did lay out a set of equipment priorities that reflected the particular nature of the type of hybrid warfare that Ukraine is contending with, and which would significantly improve his force’s effectiveness. Each type of warfare – whether in Iraq, Syria, Yemen, the Congo or Afghanistan, is determined by the geography and nature of the conflict. Urban warfare vs. desert warfare; hybrid guerrilla tactics vs. conventional combat. Lt. Gen. Sodol’s observations and priorities are based on very practical considerations and experience that are unique to this conflict.

The appropriated U.S. funding for Ukraine’s military and humanitarian assistance for Fiscal Year 2019 is $300 million, which falls under the Ukraine Freedom Support Act of 2014. A number of years ago the U.S.-Ukraine Foundation formed task forces within the FOUN, including the National Security Task Force chaired by Ambassador John Herbst and the Economic Security Task Force chaired by Ambassador Roman Popadiuk. These and the other task forces develop and advance clear policy recommendations to the U.S. government including, for example, military equipment needed by Ukraine’s armed forces and the types of specific sanctions needed to address Russian aggression.

As an example of the efforts of the FOUN, there are several congressional resolutions and proposed bills pending in the Senate that emerged immediately after the Kerch Strait incident of November 25, 2018. Several Ukrainian naval vessels were intercepted by the Russian navy, and 24 Ukrainian sailors were illegally detained in violation of international maritime laws governing free passage of ships through straits. To this day, the 24 sailors are being held in prison in Moscow, and the Russians refuse to accord them official prisoner-of-war status that the United Nations has demanded.

The House of Representatives submitted a resolution on February 8 (H. Res. 116) calling for a prompt multinational freedom of navigation operation in the Black Sea and urging the cancellation of the Nord Stream 2 pipeline. It also “urges the President, through the Departments of State and Defense, to provide additional security assistance to Ukraine, especially to strengthen Ukraine’s maritime capabilities, in order to improve deterrence and defense against further Russian aggression.

A similar resolution was passed in the Senate on January 24 (S. Res. 27). In addition, a bill was introduced in the Senate (S. 482) on February 13 by Sens. Lindsey Graham (R-S.C.), Robert Menendez (D-N.J.), Cory Gardner (R-Colo.), Ben Cardin (D-Md.) and Jeanne Shaheen (D-N.H.), directing the president to “publicly call for the Government of the Russian Federation to return Crimea to the control of the Government of Ukraine, end its support for Russian-led forces violence in eastern Ukraine…”  The Senate bill also calls on the Russian Federation to “immediately release the Ukrainian sailors that were detained following an attack by Russian forces on Ukrainian vessels in the Kerch Strait; and abide by its commitments to freedom of navigation in international waters and allow for passage of Ukrainian vessels through the strait…”

Plast Ukrainian Scouting Organization in the United States under the leadership of one of its senior fraternities, the Chornomortsi, undertook a campaign of letter writing to support the 24 imprisoned sailors, and wrote to members of the Ukraine caucuses in both the House of Representatives and the Senate to pass the resolutions and pending legislation.