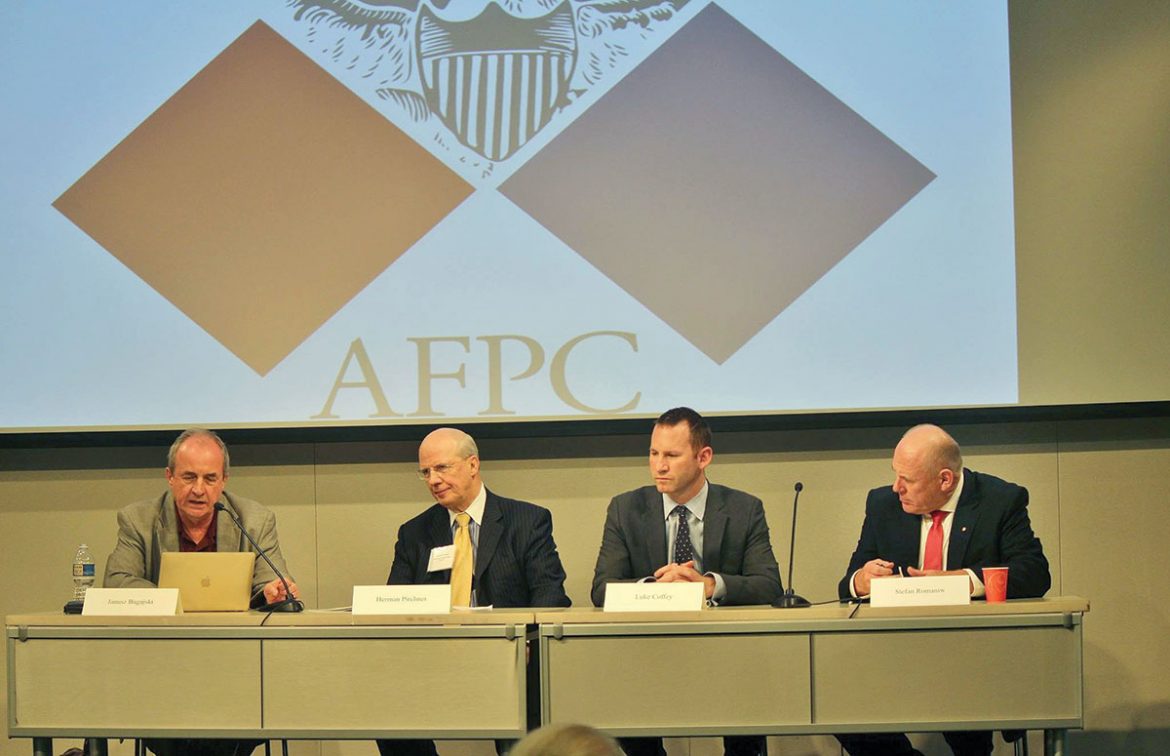 Janusz Bugajski (left) of the Center for European Policy Analysis with panelists (from left) Herman Pirchner of the American Foreign Policy Council, Luke Coffey of the Heritage Foundation and Stefan Romaniw of the Ukrainian World Congress.

WASHINGTON – At the fifth annual yearly summit of the U.S.-Ukraine working group, the Center for U.S.-Ukraine Relations (CUSUR) presented an expanded program with over two dozen scholars, diplomats, and foreign and military affairs experts addressing a rapt audience in Washington. In a conference room located one city block west of the White House, six ambassadors – five former and one current – joined with the current chairman of Ukraine’s Parliament, Ukraine’s acting minister of health and a sitting U.S. senator to “take the measure of Ukraine’s 2016-2017 progress/regress.”

The daylong event on June 15 was another collaboration among CUSUR, the American Foreign Policy Council (AFPC) and the Ukrainian Congress Committee of America (UCCA).

Before 9 a.m. that morning, Prof. Walter Zaryckyj of CUSUR took to the podium to welcome the attendees of the yearly summit and to present two special speakers. The ambassador of Ukraine to the United States, Valeriy Chaly, began his remarks by thanking the grassroots advocates for Ukraine who had visited with nearly 30 congressional offices the day before as part of the UCCA’s second Ukrainian Day advocacy event of 2017. [See story on page 3 of this issue.]

The ambassador proceeded to introduce Andriy Parubiy, the chairman of Ukraine’s Verkhovna Rada, who is known throughout the diaspora for his previous organizing work as a citizen commandant during Ukraine’s Revolution of Dignity. Mr. Parubiy spoke for nearly 30 minutes (a recording of which he posted on his Facebook page), concentrating on the enormous military effort and heroic sacrifices by Ukraine in the defense of Western norms and the post-World War II international security structure. Additionally, and of interest to the attendees of this “report card” conference, the chairman listed numerous anti-corruption reforms that his Parliament has enacted since he assumed the chairmanship.

Following the special visit by the ambassador and the Rada chairman, the assessor panels began presenting their grades on Ukraine’s performance during 2016-2017 over the course of six distinct sessions.

Judge Bohdan Futey of the U.S. Court of Federal Claims moderated the first panel, which included Stephen Nix of the International Republican Institute, Nile Gardiner of the Heritage Foundation and Ostap Kryvdyk, special adviser to the chairman of the Verkhovna Rada. (Katie Fox of the National Democratic Institute had to cancel at the last minute.) The panel debated the progress made in election reforms, the overhaul of the judicial system and Ukraine’s civil society. While overall, the grades were positive for what has been accomplished, panelists cited specific reforms that they would still like to see enacted.

The second panel was moderated by former Ambassador William Miller, the second U.S. ambassador to Ukraine, and consisted of independent consultants adept in delving into fiscal and monetary policy: Adrian Karatnycky, Aleks Mehrle and Brian Mefford. As with the previous panel, this group agreed that Ukraine has come a long way towards fostering a proper investment climate, however, an enormous potential for outside investment continues to be stymied by a lack of transparency in many sectors, as well as Ukraine’s flawed history of privatization.

In assessing Ukraine’s progress towards “Ever Greater Security,” moderator William Courtney, former U.S. ambassador to both Georgia and Kazakhstan, led a discussion about Ukraine’s armed forces that saw most available seats in the room fill quickly. Dr. Phillip Karber, president of the Potomac Foundation, and Glen Howard, president of the Jamestown Foundation, were joined by Nolan Peterson, a former special operations pilot and a combat veteran of Iraq and Afghanistan, in a discussion heavily influenced by their many recent travels to Ukraine. While the moderator and each panelist presented a detailed report, the overall theme focused on how Ukraine needed to maintain its exceptional level of combat successes against a foe with superior numbers. Dr. Karber highlighted the successes of Ukraine’s Airmobile Force (VDV) under the command of Brig. Gen. Mykhailo Zabrodskyi, who was recently recognized as a Hero of Ukraine.

In response to a question about what private citizens could do to most help Ukraine’s armed forces, Mr. Howard pointed out the deficiencies in Ukraine’s naval forces following the occupation of Crimea. Considering that Ukraine has never had a naval officer graduate from the U.S. Naval Academy (in contrast to the multiple graduates of the U.S. War College), Mr. Howard advocated for establishing a scholarship in that regard.

Prior to the attendees breaking for lunch, another special speaker arrived on site: Ukraine’s Acting Minister of Health Ulana Suprun. Overlapping her visit to the United States with that of Chairman Parubiy, Dr. Suprun spent her time in Washington, explaining her system of health care reforms to American audiences, as well as Ukrainian Americans, including participants of the 44th Scientific Conference of the Ukrainian Medical Association of North America, at which she delivered a keynote address later that same week.

With a well-honed and concise PowerPoint presentation, Dr. Suprun brought the stark reality of Ukraine’s lack of a functioning health care system to light. This frank assessment was paired with a summary of the improvements already enacted by the Ministry of Health, as well as a report on which reforms still face an uphill battle in the Verkhovna Rada. From raising minimum entrance requirements at medical schools, to elevating the status of nurses within medical facilities and simply ensuring that blood used in transfusions comes from a safe and tested supply, Dr. Suprun stated her case for a sensible national health care system.

The primary hurdle to get these reforms passed remains the Ukrainian Parliament’s bill No. 6327, “On State Financial Guarantees for Providing Medical Services,” whose passage Dr. Suprun deems to be imperative this year. In her estimation, delaying passage any longer would bury prospects for prompt reform during the coming election cycles of 2018 and 2019.

Following Dr. Suprun’s presentation, she was surprised by Andriy Futey, president of the UCCA, who invited Tamara Olexy, his immediate predecessor, and her predecessor, Michael Sawkiw, to belatedly present the 2016 Shevchenko Freedom Award, the highest accolade given by the UCCA, to Dr. Suprun. The award was bestowed on the acting minister for her commitment to the well-being of Ukraine’s people and in recognition of her earlier work as the director of humanitarian initiatives for the Ukrainian World Congress. [See story on page 4 of this issue.]

At the fourth panel discussion of the day, former U.S. Ambassador to Lithuania Keith Smith moderated a panel on energy security that included the first U.S. ambassador to Ukraine, Roman Popadiuk, as well as Myron Rabij, a global partner with the multinational law firm Dentons, and Taras Berezovets, the founder of the Free Сrimea project.

During a discussion with his fellow former ambassador, Mr. Popadiuk highlighted the potential of alternative energy production in Ukraine, such as “biomass fuel” which could potentially generate enough energy to supply 10-12 percent of Ukraine’s demand by using discarded straw left on the ground. Ukraine was also described as having great opportunities for expanding wind and solar power plants, in addition to shale oil deposits in western Ukraine for which Western extraction techniques would be required. Mr. Keith plainly described the unfortunate influence of oligarchs in the energy markets of Eastern Europe. With their own private security forces, they regularly chase down regulators and diplomats all over Europe with intimidation tactics, the ambassador noted.

Orest Deychakiwsky, a recently retired former policy advisor of the U.S. Commission on Security and Cooperation in Europe (known as the Helsinki Commission), began the fifth panel of the day with a description of his panel’s topic, “Social Cohesion.” Opining on the state of “cohesion” in today’s Ukraine were Profs. Lubomyr Hajda and Viktoriya Sereda of the Harvard Ukrainian Research Institute (HURI), as well as the Jamestown Foundation’s Vladimir Socor and a former permanent representative of Ukraine to the United Nations, Ambassador Yuriy Sergeyev.

The joint presentation by the professors from HURI demonstrated through national survey results that self-identification as a “Ukrainian” and a clarity of what it means to be “Ukrainian” has risen dramatically throughout Ukraine. Ambassador Sergeyev, on the other hand, sought to give context to the oft-reported dissatisfaction with living standards in Ukraine by demonstrating where Ukraine had failed to capitalize over the last two decades in comparison with other countries of similar size and development. In the end, the numbers all point to Ukraine flourishing only after transitioning to a technologically innovative state, as opposed to a fossil-fuel transit hub. 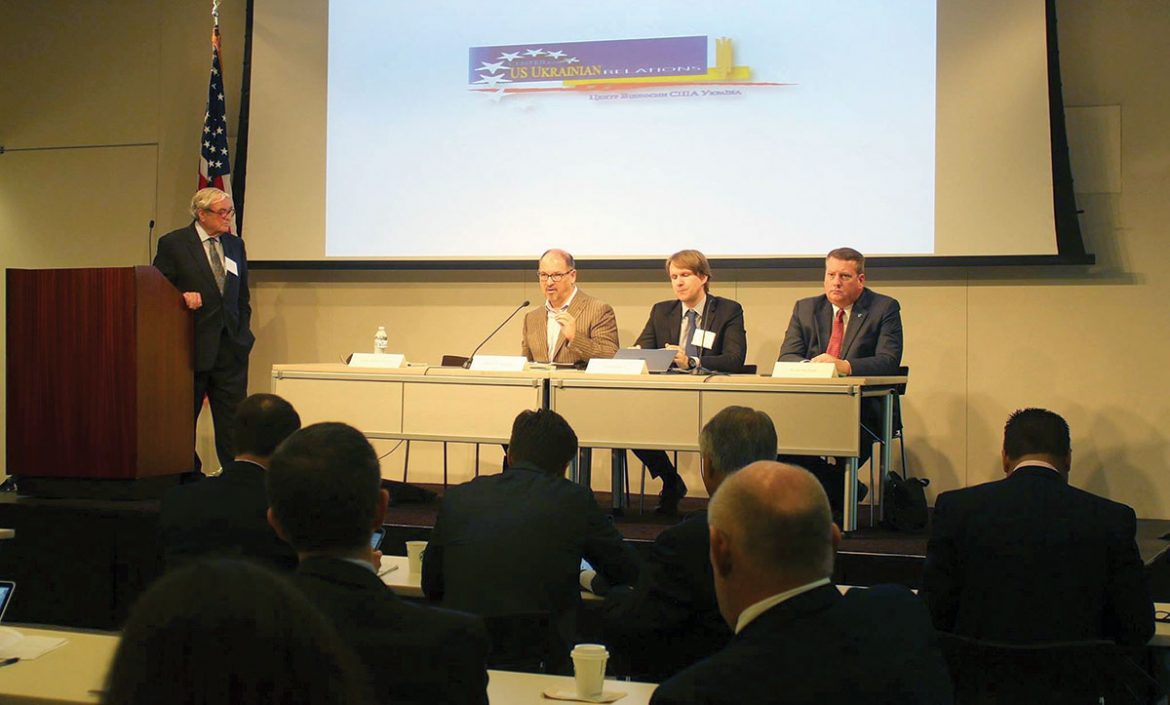 The sixth and final panel of assessors was chaired by Janusz Bugajski of the Center for European Policy Analysis; it included panelists Herman Pirchner of the American Foreign Policy Council, Luke Coffey from the Heritage Foundation, and Stefan Romaniw, secretary-general of the Ukrainian World Congress. Closely mirroring the discussion on “Social Cohesion,” this panel assessed the state of national identity in Ukraine. As all four participants had recently journeyed to Ukraine, they kept their focus on discussions they’d had with the younger generations in Ukraine, and where members of that generation saw themselves heading.

Although all the panelists rendered a grade above 50 percent, Mr. Coffey granted the best grade of the day when he proposed giving Ukraine an “Incomplete,” which he described as a grade that “may be assigned when a student’s work is of passing quality and represents a significant portion of the requirements for a final grade, but is incomplete due to circumstances beyond his control.”

Following the conclusion of the assessor panels, the U.S.-Ukraine Foundation’s Adrian Karmazyn had the honor of introducing the final special guest of the day: Sen. Roger Wicker (R-Miss.), newly appointed chairman of the U.S. Helsinki Commission. Although he proudly described himself as just “a simple guy from Mississippi,” Sen. Wicker went on to describe a long career invested in fostering international relations. When answering the question posed by the title of his remarks – “Why a Free, Stable and Prosperous Ukraine Still Matters” – the senator summed up his opinion by stating, “Putin needs to lose this one.” 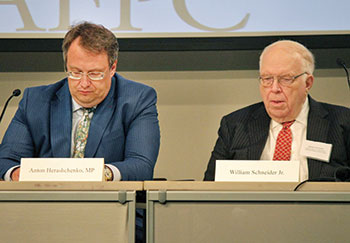 Nearly nine hours after having begun that morning, attendees gathered in the conference room to hear closing remarks by former U.S. Undersecretary of State William Schneider Jr. and Ukrainian National Deputy Anton Herashchenko. The conclusion of the annual summit was officially announced by the UCCA’s Ms. Olexy, who took to the podium to officiate at the final tally of grades issued that day. Ms. Olexy commented that, notwithstanding the varying viewpoints of the speakers, with an average overall report card grade of B-, all were in agreement that Ukraine is performing better than expected, but there is still room for improvement.

After organizers once again thanked the summit’s sponsors and generous patrons, attendees were invited to attend a reception with the panelists to continue the discussion late into the evening.

Andrij V. Dobriansky is director of communications and media at the Ukrainian Congress Committee of America.