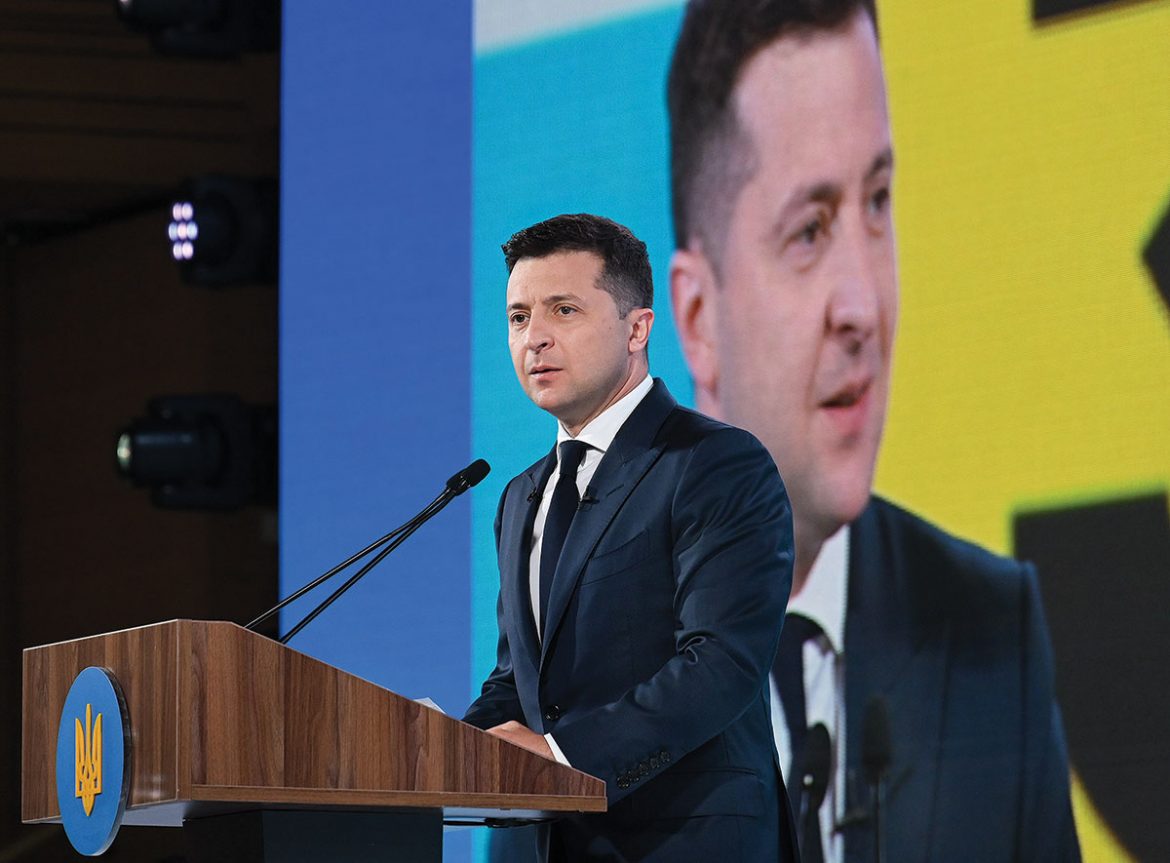 Office of the president of Ukraine

Ukrainian President Volodymyr Zelenskyy speaks in Kyiv on June 6 at a weekly forum that was devoted to the environment.

KYIV – Ukrainian President Volodymyr Zelenskyy’s invitation to the White House in July comes as Kyiv is reeling from what it says is not reciprocal support from its Western partners, including from the U.S., amid escalating Russian belligerence and being shunned from the high-level summit in Brussels at the headquarters of the North Atlantic Treaty Organization (NATO).

As a country with whom Russia is waging an undeclared bloody war since 2014 to the loss of some 14,000 lives, Mr. Zelenskyy has voiced frustration with the lack of support the country has received given that Ukraine is facing a national security threat in the face of a far superior military foe.

U.S. President Joe Biden recently lifted sanctions on a Russian pipeline project that will erase Ukraine’s strategic role as a natural-gas transit country to Europe, reducing what little remains of its political leverage over Moscow while leaving it exposed to further military aggression.

Furthermore, Germany emphasized that it would not sell weapons to Ukraine despite its track record of winning contracts in Russia to upgrade its military infrastructure after the Kremlin’s 2008 war with Georgia, another country with NATO aspirations.

NATO has not invited Ukraine to its June 14 summit. The previous NATO summit took place in 2018.

However, a source at the Ukrainian presidential office who is not authorized to speak to the media told The Ukrainian Weekly that Ukraine is still holding discussions about taking part in the June 14 summit in some format via a video conference.

In an interview with HBO’s Axios during the week, the Ukrainian president voiced consternation about the country not receiving a Membership Action Plan (MAP) from NATO although Washington think tanks, such as the Potomac Foundation, have noted that Germany received membership to the defense alliance in 1954 while about 30 percent of its territory was occupied by the Soviet Union.

While on a tour to central and eastern Europe in 2009 as vice president, Mr. Biden said that Washington would never make a deal about anything “above your heads or behind your backs.”

To stress his point, he twice repeated “nothing about you without you,” while addressing an audience in Bucharest.

Readouts from his conversation with his Ukrainian counterpart said that Mr. Biden “was against the implementation of the Nord Stream 2 project” and that “for his part, Volodymyr Zelenskyy emphasized Joe Biden’s attention to the fact that Nord Stream 2 is not an economic project. It poses a serious threat and is a security challenge, and must be viewed in terms of security guarantees for Ukraine.”

“They had the opportunity to talk at some length about all of the issues in the U.S.-Ukraine relationship and President Biden was able to tell President Zelenskyy that he will stand up firmly for Ukraine’s sovereignty, territorial integrity and its aspirations as we go forward,” U.S. National Security Adviser Jake Sullivan told White House reporters.

Last month, Mr. Biden signed off on waivers that would allow the completion of Nord Stream 2, part of an underwater pipeline project to Germany that will eventually have the capacity of pumping 110 billion cubic meters of gas yearly while bypassing Ukraine.

Chief executive Yuriy Vitrenko of Ukrainian state-owned oil and gas company Naftogaz voiced concern over the likely completion of the pipeline. Speaking from Washington to ICTV in Kyiv on June 9, he said a potential international lawsuit could be filed against Russian state-run Gazprom.

Mr. Vitrenko noted that his research team will submit documentation to the European Union’s anti-trust agency on the Russian gas giant’s dominance on the European energy market. Notably, that documentation will point out that Russia prevents gas sourced from Central Asia from transiting to the EU, including Ukraine.

Nord Stream 2, “without a doubt, will be used as a political weapon by the Kremlin to dictate its political agenda in Europe,” Mr. Wasylyk said.

“Moreover, if the Nord Stream 2 pipeline comes online it will leave Ukraine more vulnerable to Russian military aggression, as the Kremlin has no vested interest in keeping Ukraine’s pipeline operational and competitive with Nord Stream 1 or Nord Stream 2,” Mr. Wasylyk said.

Russian President Vladimir Putin already threatened to blackmail Ukraine over gas transiting through the country if it didn’t improve its relationship with Moscow.
At a yearly international economic forum in Saint Petersburg on June 4, Mr. Putin said Russia would “need goodwill on the part of our Ukrainian partners” to maintain its long-term status as a transit country.

Ukraine’s gas transit contract with Russia runs through 2024 and has a ship-or-pay clause of 40 billion cubic meters a year. German Chancellor Angela Merkel has stated that Berlin would hold talks with Moscow to safeguard Ukraine’s role as a vital gas transit country without explaining how that could be enforced.

In addition to Russia chopping off about 7 percent of Ukraine’s territory since 2014, it has engaged in subversion and assassination inside the country, launched cyberattacks and ceaselessly wages propaganda and disinformation warfare.

About 100,000 Russian soldiers are currently deployed near Ukraine’s state border with Russia, including on the occupied Crimean Peninsula, which has become heavily militarized since Moscow illegally annexed it in 2014.

Washington and analytical centers like the Potomac Foundation and Jamestown Foundation have noted that Israel receives billions of dollars, whereas Ukraine receives about $250 million yearly in U.S. security assistance, a sum that is not sufficient to withstand Russia’s superior strength.