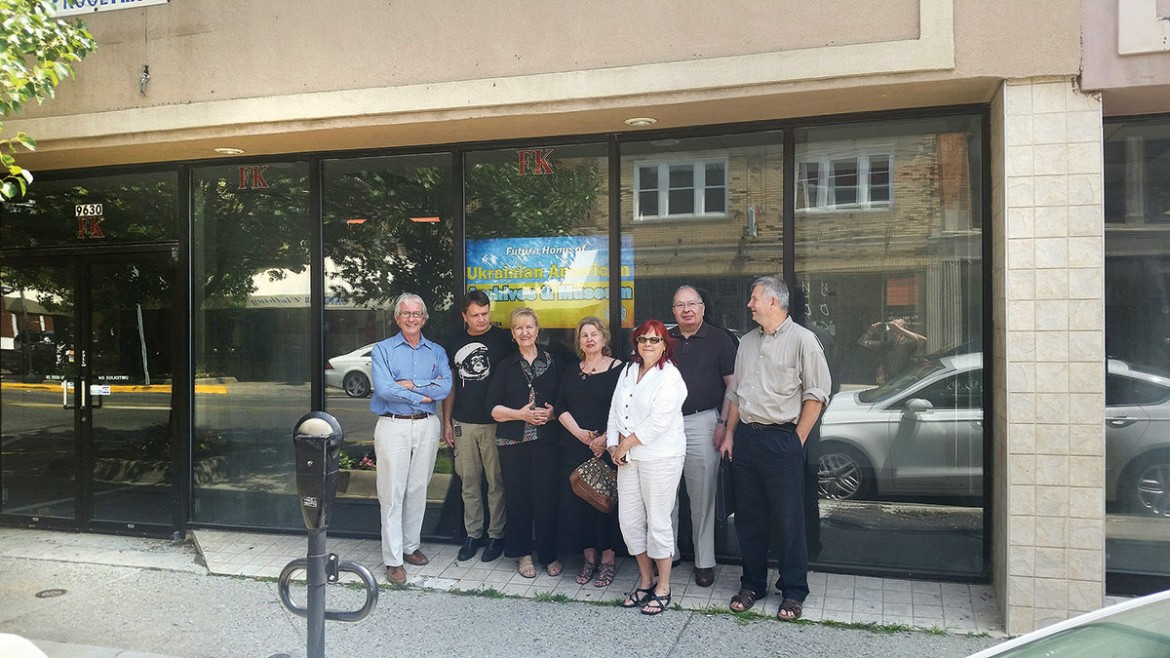 Board and Building Committee members of the Ukrainian American Archives and Museum of Detroit in front of the newly purchased building.

HAMTRAMCK, Mich. – The Ukrainian American Archives and Museum (UAAM) of Detroit, founded in 1958, has purchased a much-needed larger building in the multicultural city of Hamtramck, Mich. The museum will join a consortium of cultural venues, including the Hamtramck Historical Museum, Polish Art Center, Tekla Vintage, Immaculate Conception Ukrainian Catholic Church, as well as other historical churches, art galleries, ethnic restaurants and business entities.

The building that presently houses the UAAM consists of 1,500 square feet and is not conducive for displays of the museum’s vast holdings or for hosting events. The board of trustees recognized that the present facility was inadequate, and an intense search for a new building ensued. The aim is to reach a broader audience and to provide greater visibility of the Ukrainian heritage.

Ukrainian immigrants built churches, schools and community halls, and established organizations. Today their children come knocking on the museum’s door searching for their roots. Tour buses filled with interested parties, professors and students come to view the museum’s artifacts or to do research. About 90 percent of the Museum’s visitors are non-Ukrainians.

Throughout the years, the museum became the repository of traditional crafts, historical documents, archives of local prominent Americans of Ukrainian descent and Ukrainian American organizations. The museum’s holdings include a historic document signed by Metropolitan Andrey Sheptytsky; Mychajlo Dmytrenko’s paintings and sketches of icons that were transferred to the walls of Immaculate Conception Church; vintage traditional folk wear from various Ukrainian regions; contemporary embroideries produced by local artists; maps of various areas in Ukraine dating back to the 15th and 16th centuries; historical documents, musical notes and records; uniforms and medals relating to Ukraine’s struggle for independence in the 19th and 20th centuries; stamps, archival collections of photographs, records of various immigrant organizations; and personal memoirs that document Ukrainian immigrants’ struggle to attain the American dream but retain their language and traditions.

Over time, the Museum has accumulated 25,000 books from the libraries of various community leaders and members. The museum is the proud recipient of the archives of Dr. Beck, the first woman president of the Detroit City Council.

Upon the passing of the museum’s founder, Roman Dacko, in 1998, Dr. Alexander Serafyn, Irena Zacharkiw and Dr. Dzul acted to preserve the museum’s wealth and fulfill Mr. Dacko’s last will and testament. Necessary repairs were made to the existing building. A new board of nine trustees was elected, with Dr. Mykola Hryhorczuk as its president. Danylo Dmytrykiw was hired as executive director, followed by Roman Maziak. The current executive director is Chrystyna Nykorak.

To begin the process of purchasing larger quarters, the board sought advice from the Detroit Executive Service Corps and with their help, on May 2, 2008, new by-laws and a revised mission statement were adopted.

The mission statement is as follows: “The mission of the UAAM is to preserve Ukrainian cultural and historical artifacts and to educate the general public about the contributions of Ukrainian immigrants to America. The organization accomplishes these objectives by maintaining archives, a library and a museum open to the public.”

The museum presented several bids for various buildings but was unsuccessful. Ihor Kunynskyj worked diligently as chair of the Building Committee; the museum expressed its gratitude for his services.

Swetlana Leheta was subsequently elected as president of the board. She allocated further repairs of the building and organized the museum’s 50th gala anniversary banquet, inviting the Polyanytsi performers from Kyiv, Ukraine.

Ms. Leheta, Zwenyslava Hayda and artist John Nagridge, with the assistance of the board, were influential in organizing the exhibit, “A Cultural Thread: The Enduring Ukrainian Spirit” at the Detroit Historical Museum. The current president, Ms. Hayda, with the approval of the present board of directors, spearheaded the purchase of the museum building at 9626-9630 Joseph Campau in Hamtramck.

The new building consists of approximately 7,000 square feet with a full lower-level storage area of 6,000 square feet. At present, many of the museum’s holdings are stored at various locations. With the purchase of the larger building, all of the museum’s collections will be under one roof. Renovation of the building has begun and a grand opening is planned in the near future. The doors will be open to all interested parties for research, exhibits, oral history documentations, events, lectures, workshops, translations and genealogical explorations.

To support this endeavor, contributions to the UAAM may be made by sending donations to the museum at its current address, 11756 Charest St., Hamtramck, MI 48212, or via PayPal on the museum’s website at http://ukrainianmuseumdetroit.org/PayPal.html. Checks should be made payable to the Ukrainian American Archives and Museum; donations are tex-deductible.