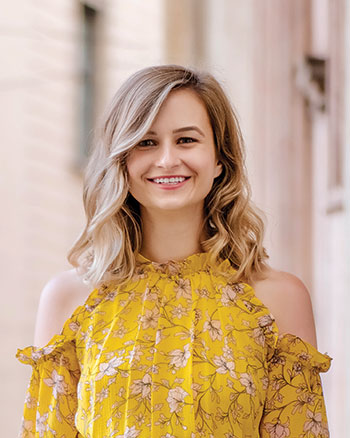 PARSIPPANY, N.J. – Roksolana Sheverack, a student of New York University’s School of Professional Studies, Division of Programs in Business, was chosen to be the graduate student speaker during the school’s convocation ceremony held online on May 20.

A Ukrainian immigrant from Yaremche, Ivano-Frankivsk Oblast, Ms. Sheverack arrived in the United States with her family in 2000 at the age of 10. Her experience as a fourth-grade English as a second language (ESL) student helped shape her aspirations and her abilities to assist other students who are not native English speakers.

In her convocation speech, Ms. Sheverack spoke of the difficulties she faced as a student and the strides she took to overcome those challenges.

“My journey began freshman year of college in an English composition course when I received my first grade. It was a C,” Ms. Sheverack said. “With English being my second language, I knew I was not the most vigorous writer. But a C? I was so upset. But little did I know that that grade would serve as a decisive moment in my life. It taught me how to reflect on my weaknesses and turn them into opportunities to overcome a challenge.”

“For a young woman who came to the United States from Ukraine with her family at the age of 10, this was a powerful lesson. I embraced that challenge,” Ms. Sheverack told her fellow NYU graduates.

Ms. Sheverack later spoke with The Ukrainian Weekly about her experience being selected for and giving the prestigious convocation speech.

“During the application process to be selected as a speaker, a committee (comprising student assistants, professors, faculty members, staff from academic departments related to the School of Professional Studies) reviewed the applicants’ qualifications, and an interview portion examined the candidate’s involvement at NYU, ending with a live audition reading of a draft of the speech,” Ms. Sheverack said.

Ms. Sheverack, who earned a master’s of science in management and systems with a concentration in database technologies, said she plans to pursue a doctorate with the goal of working in institutional research in a university setting.

While working as an admissions counselor at the City University of New York welcome center, Ms. Sheverack used her previous experience as a non-native English language speaker to help other prospective students. She also drew on her Ukrainian background as a resource to help her be a more compassionate and empathetic admissions counselor.
“Working with local high school students, informing on programs, many students came from beyond the borders of the U.S.A., and I helped them improve their English language skills, and when people found out I was Ukrainian, people just started showing up, seeking college applications. The Veselka Restaurant in New York also served as a place to network, with students finding me through my business card that I distributed there. I met people from my hometown in Ukraine, many different ages, but from the same place,” Ms. Sheverack said.

She completed her undergraduate studies at the Brooklyn Campus of Long Island University (LIU), where she graduated with a double major in English literature and political science. While at LIU, Ms. Sheverack served as a mentor and student ambassador, and it was this experience that encouraged her to pursue institutional research focusing on data-driven decisions to help college students. She told The Weekly that she plans to take a year off from studies and will likely continue her doctorate at NYU, noting, “I’m considering the testing requirements and am open to exploring different options.”

When asked about challenges faced in a climate of cyberattacks and cyber-hacking as it relates to data integrity and intellectual property, Ms. Sheverack said these topics were very important to her work.

“This was among my graduate research topics,” Ms. Sheverack said. “I was hoping to draw attention to intellectual property threats, using artificial intelligence in a case study, related to poetry and [I wanted to know whether] the software was able to identify ownership of the poetry examples. I worked with an intellectual property lawyer to further the research, including using a robot poet to challenge the ownership rights to differentiate between the robot and sonnets by William Shakespeare. It’s an interesting topic and universities are expanding this field of study, programs and funding for students.”

During her time at NYU Ms. Sheverack was named a Dean’s Graduate Scholar, served as public relations chairperson of the Management and Systems Student Association, was a student orientation leader and a student mentor at the NYU SPS High School Aspire Program.

While mentoring, she met regularly with three high school seniors over the course of 10 months, helping them to navigate the college admissions process by researching schools and academic programs, reviewing their college essays and encouraging them to apply for scholarships.

Ms. Sheverack is a graduate of the St. George Academy in New York, and her current involvement with Ukrainian community organizations has taken a back seat to her studies. However, she had an internship with the Ukrainian Congress Committee of America that she said helped with her political science major.

“I assisted new students, and many had international backgrounds, among them many first-generation Americans. I had an opportunity to engage with Ukrainian Americans in a process that can be overwhelming,” she said.

The video of the convocation can be viewed online via YouTube, https://www.youtube.com/watch?v=_MWMBPowBDA. Ms. Sheverack’s address begins at 52:41 seconds of the video.