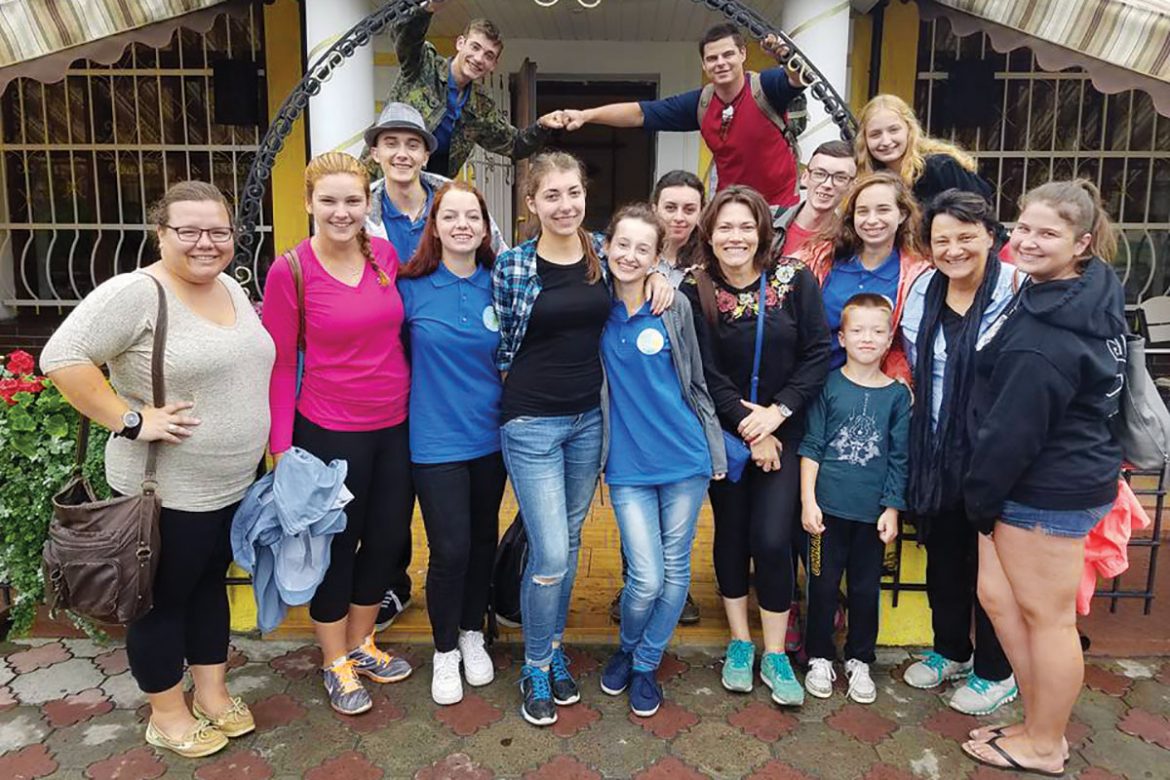 Ukrainian American Youth Association members with counselors from Ukraine in front of the pizzeria in Chervonohrad, Ukraine, before the start of camp.

This year marks the 70th anniversary of the resurrection of the Ukrainian Youth Association (UYA) in Augsburg, Germany. The Ukrainian Youth Association was originally established in Kyiv in 1925 as an underground organization whose goal was to achieve an independent Ukraine (at that time Ukraine was under Bolshevik and Polish rule). UYA was dismantled by the Bolsheviks after only five years of clandestine operations in Kharkiv.

During World War II, many Ukrainians found themselves in Germany for a variety of reasons, and among them were members of UYA who were never found by the Bolsheviks. These members resurrected the Ukrainian Youth Association and created what is the present-day Ukrainian American Youth Association (UAYA) here in the United States. The present-day mission of the organization is to educate children based on Christian and nationalistic principles under the motto of God and Ukraine, so that they can be exemplary citizens in the country where they live.

In the last 70 years since the re-establishment of the UYA, the U.S. chapter has had many projects that promoted the guiding principles of the organization. One of the most successful and popular is the exchange program (“Obmin”) of counselors between the United States and Ukraine. This was the sixth consecutive year that a group of college students participated in this innovative exchange program of the Ukrainian American Youth Association with its sister organization in Ukraine. The program brings about the exchange of ideas, best practices and life experiences between the counselors and junior counselors of the two countries.

Perhaps more importantly, it is helping to develop lines of communications, collegial relationships and enduring friendships between developing leaders of the youth organization in two very different countries; it fosters the realization that although we are different, we have a strong common bond that unites us.

For the 2016 program, the U.S. National Executive started its search for prospective exchange candidates in December 2015 and the participants chosen were a sample from different geographic areas of the U.S. where there are UAYA branches.

Those chosen were: Alexandra Gorodiski, 19, from the Chicago branch, a sophomore at DePaul University; Lesia Hrycyna, 21, from the Rochester, N.Y., branch, a junior at SUNY Binghamton; and Jessica Demianicz, 21, from the Jersey City, N.J., branch, a senior at Bloomfield College. This combination of members from different areas of the U.S. brought a wonderful set of opinions and viewpoints on running a camp to the exchange program.

The program started with Ukraine sending a counselor from Ternopil, Lesia Holyk, and two young counselors in training, both age 16, Daryna Symchych and Anya Berezovska from Kyiv. They participated in the counselor in training camp (“Vyshkilnyi Tabir”) in Ellenville, N.Y., and then Ms. Holyk spent one week at the UAYA counselor in training camp in Baraboo, Wis. At the end of the two weeks of camp and some sightseeing, the Ukrainians and their American counterparts flew to Ukraine.

They spent the first few days in Ukraine touring the old western city of Lviv. Following the respite in Lviv, the participants of the program arrived in the village of Ozernyi Kray, on the outskirts of Lviv, where they attended the Ukrainian version of the counselor in training camp, which is used as a staging platform for the children’s camp. The counselors boarded a bus and, with a medley of Ukrainian songs, drove to a village called Komariv, near the city of Chervonohrad, about an hour north of Lviv, where they awaited the arrival of the campers from all areas of Ukraine.

The Americans and their Ukrainian counterparts participated as counselors and counselors in training at the Ukrainian summer camp. The work was a 24/7 immersion in Ukrainian camp life. What follows are the impressions and memories of the American participants.

I had an amazing opportunity to not only go to Ukraine for the first time, but also to attend camp. My entire life I went to Ukrainian school to learn this beautiful language, culture and history. Just being able to see everything in person – words cannot describe how beautiful and how far our country has gone to be where they are today.

Going to counselor in training camp, I did not know what to expect, however, it was only four days and people were so friendly. My Ukrainian has improved and I learned new dances, as well as games to play with the children. I will definitely miss the nights of us sitting in a circle and singing Ukrainian songs all night long.

A day after counselor in training camp, the camp for children started. I was apprehensive at first, as I realized I was responsible for planning activities for the two weeks for the children, but with the amazing help from my counselors in training and my new Ukrainian friends I was successful, everyone had a great time, and the children learned something new each day. With all the amazing new friends, I have in Ukraine, I look forward to visiting Ukraine again, going to camp and seeing my new friends.

This journey was a once-in-a-lifetime experience. Not until I got on the plane did it set in my mind: “I’m going to Ukraine this summer.” The Ukrainian American Youth Association has given me so much, and this summer I had the opportunity to work at camp in Ukraine.

We first had counselor in training camp, which gave us the opportunity to prepare for camp and meet everyone we would be working with. We learned so many new activities and games to play with the kids, which were fun for all ages, as we experienced ourselves. We sang and danced, teaching and exchanging our knowledge with all the friends we made. I felt at home, just as I would at camp in America, only with a different group of people. The atmosphere was incredible and everyone felt it.

Then camp started, the kids arrived and the work began. I worked with boys age 6 to 9 and the phrase that comes to mind is: boys will be boys. Boys will definitely keep you on your toes and you have to be ready to run! As crazy an experience as it was with the boys, it was also incredibly rewarding. I do not have words to describe how amazing this opportunity was. You walk away with the most incredible memories and knowledge to share and bring to others.

As any Ukrainian American would say, I fell in love with Ukraine: the land, its people and the living history. Moreover, I became even more enthused about the Ukrainian American Youth Association, an organization I have been a member of my entire life. Seeing the organization in a stage of progression made me realize that our mission of serving Ukraine and God is of the utmost importance.

I had the opportunity to work with girls 8-10 years of age. Their curiosity is never-ending, they have a burning desire to learn and an even greater desire to socialize. I was proud that at the end of camp they all came out with new knowledge and new memories that as camp counselors we helped facilitate.

The trip also allowed me to make everlasting friends and connections, and to develop new ideas. From Ukrainians I learned a new way to plan a camp program and countless ways to engage children from dawn to dusk. The Ukrainians learned about organization and communication that needs to be prevalent throughout the year and during summer camps.

Overall, this trip is one of the greatest experiences the UAYA offers, as it shows that the organization has no borders and that one branch is always willing to help another.

Readers can watch the multimedia presentations of the exchange participants on the U.S. page of cym.org. If you are a member of UAYA, and are interested in becoming a participant of this program, check the website for upcoming information in late November.