Members of the Ukrainian American community in Binghamton, N.Y., took part in a commemoration of Ukraine’s 30th anniversary of renewed independence at City Hall on August 24.

BINGHAMTON, N.Y. – The Ukrainian community of Binghamton, N.Y., celebrated the 30th anniversary of Ukraine’s renewed independence on August 24 with a flag-raising ceremony at Binghamton City Hall.

Since the 1950s, the local branch of the Ukrainian Congress Committee of America (UCCA) in Binghamton N.Y., has organized an annual celebration of Ukrainian Independence Day at the City Hall in Binghamton, N.Y., that includes a flag-raising program.

Prior to 1991, the UCCA branch also annually commemorated the earlier date of Ukrainian independence – January 22, 1918 – with a choir concert and address by prominent Ukrainian dignitaries. The concerts would rotate among different Ukrainian churches in the area.

Since 1991, the Ukrainian flag-raising and program is celebrated at the Binghamton City Hall. The three Ukrainian churches in the area are the hubs of Ukrainian American community activities.

Stephan Wasylko emceed this year’s celebration.  He introduced the Rev. Teodor Czabala of Sacred Heart Ukrainian Catholic Church, the Rev. Ivan Synevsky of St. John the Baptist Ukrainian Orthodox Church, and Deacon Boris Mayba of the First Ukrainian Pentecostal Church. The pastors reminded guests of the power of the prayer, “God and Ukraine,” and they asked those present to provide support for the wounded and the families of those killed defending Ukraine against Russia-led forces who are waging a war in eastern Ukraine. Mr. Wasylko highlighted why Ukraine is important to the United States and the West.

Mr. Zobniw thanked the mayor for welcoming Ukrainians to the celebration. As deputy mayor and mayor, Mr. David has taken part in Ukrainian Independence Day celebrations for almost two decades.

Taras Stets provided a historical commentary, saying that, “This independence commemorates Ukraine’s struggle for survival across centuries of foreign occupation.” 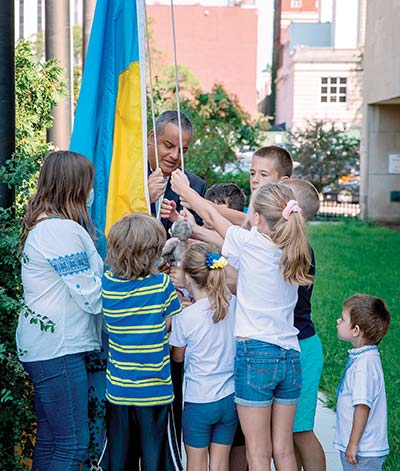 Eugene Czebiniak, choir director at Sacred Heart Ukrainian Catholic Church, sang the song “Prayer for Ukraine.” Mr. Wasylko recited the prayer in English. On behalf of Post 43 of the Ukrainian American Veterans, Michael Dobransky greeted all of those in attendence. Mr. Dobransky led the reciting of the Pledge of Allegiance.  Children assisted the mayor in raising the Ukrainian flag; while attendees sang the Ukrainian national anthem.

The event was especially important to the Zobniw family, as Mr. Zobniw’s fie, Maria, was a victim who perished during the ACA mass shooting.  As a result, Mr. Zobniw took personal pride in organizing the Ukrainian Indepen­dence Day celebration/commemoration in Binghamton City Hall. Ms. Zobniw believed Ukrainian history teaches people that national independence is precious and hard earned, and the Ukrainian diaspora should share their heritage within the local community.

“Citizens of Ukrainian descent take this day to express their voice and take their place in a community of freedom and independence, as well as showing support for their concerns against Russian aggression and show hope for a brighter future,” a reporter for the station said.

Mr. David spoke highly of members of the Ukrainian community in the city.

“Here in Binghamton, we are so fortunate, we are so blessed to have a very strong, a very large and a very tight-knit Ukrainian community,” the mayor said.

Vincenzo Scarapicchia of WCIZ Fox 40 noted that, “Although this flag-raising was a celebration of the Ukrainian spirit and freedom, the local Ukrainian community also uses this opportunity to spread awareness in the area about Ukraine’s oppressed history.”

Jackie Gillis of WIVT/WBGH NewsChan­nel 34 quoted Mr. Wasylko, saying that, “Ukraine has continued to preserve freedom of speech, basic human rights and real fair, free democratic elections, rights the Ukrainians for centuries have fought for and died for.”