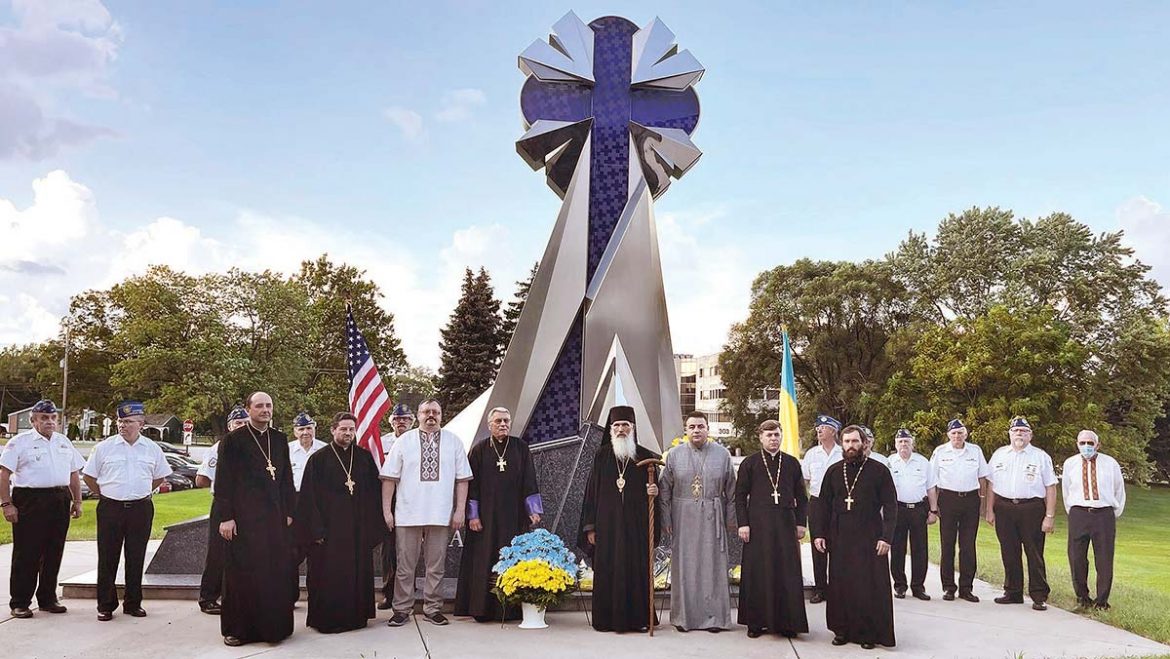 BLOOMINGDALE, Ill. – Members of the Ukrainian community in Illinois marked the 30th anniversary of Ukraine’s renewed independence with a gala concert and an ecumenical prayer on August 28.

The event, held in collaboration with the Consulate General of Ukraine in Chicago, was hosted by St. Andrew Ukrainian Orthodox Cathedral in Bloomingdale, Ill.

John Jaresko, the president of the Church Board of St. Andrew Ukrainian Orthodox Cathedral, invited Bishop Benedict Aleksiychuk of the Ukrainian Catholic Eparchy of Chicago to commence the ecumenical prayer of thanksgiving.

The prayer was continued by the Very Rev. Victor Poliarny, the secretary of the Vicariate of the Orthodox Church of Ukraine in U.S.A., Canada, Australia and Japan and pastor at St. Andrew, and the Rev. Mykola Buriadnyk, pastor of St. Joseph the Betrothed Ukrainian Catholic Church in Chicago.

Other clergy who participated in the prayer were the Rev. Mykhaylo Leshchy­shyn, the Very Rev. Serhiy Kovalchuk (administrator of St. Nicholas Greek Catholic Cathedral in Chicago), the Rev. Dmyt­riy Bihun and the Rev. Yaroslav Marykot. Responses were sung by the choir of St. Andrew.

Members of the Ukrainian American Veterans-Post 32 posted colors to initiate the prayer, which ended with the laying of wreaths at the Holodomor Memorial and at the monument to Ukraine’s Heavenly Hundred located at St. Andrew Ukrainian Orthodox Cathedral in Bloomingdale, Ill.

The gala concert began with the traditional Ukrainian dance “Pryvit” performed by Hromovytsia Dance Ensemble of Chicago.  The audience then welcomed the legendary Ruslana (Lyzhychko), a People’s Artist of Ukraine, and Vasyl Popadiuk, known as the “Ukrainian Paganini” and founder of the group “Papa Duke Band,” who performed alongside Ruslana. The two were joined by Timur Polianskiy, a virtuoso musician, composer and Honored Artist of Ukraine. 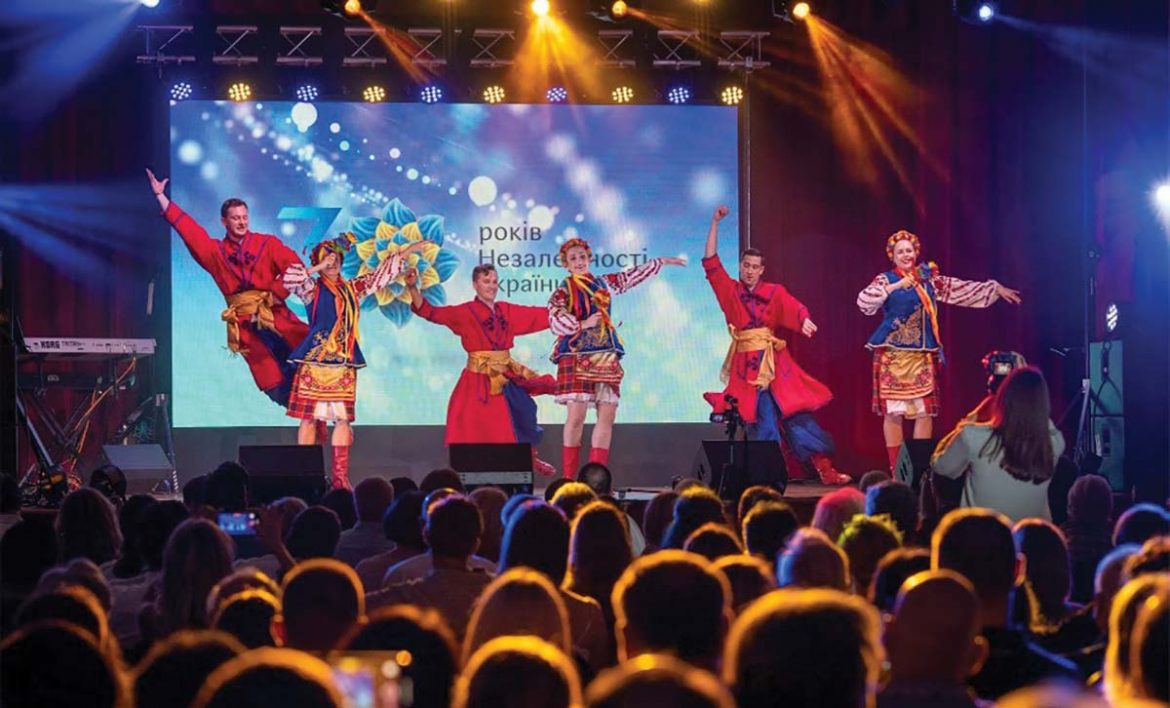 Members of the Hromovytsia Dance Ensemble of Chicago perform the “Pryvit.”

The three performed an incredible and emotionally uplifting set that culminated with the performance of Ruslana’s famed song “Wild Dances,” which drew a standing ovation from the audience in St. Andrew’s Concert Hall.

Following the concert, Ruslana talked about the event on her Instagram page. 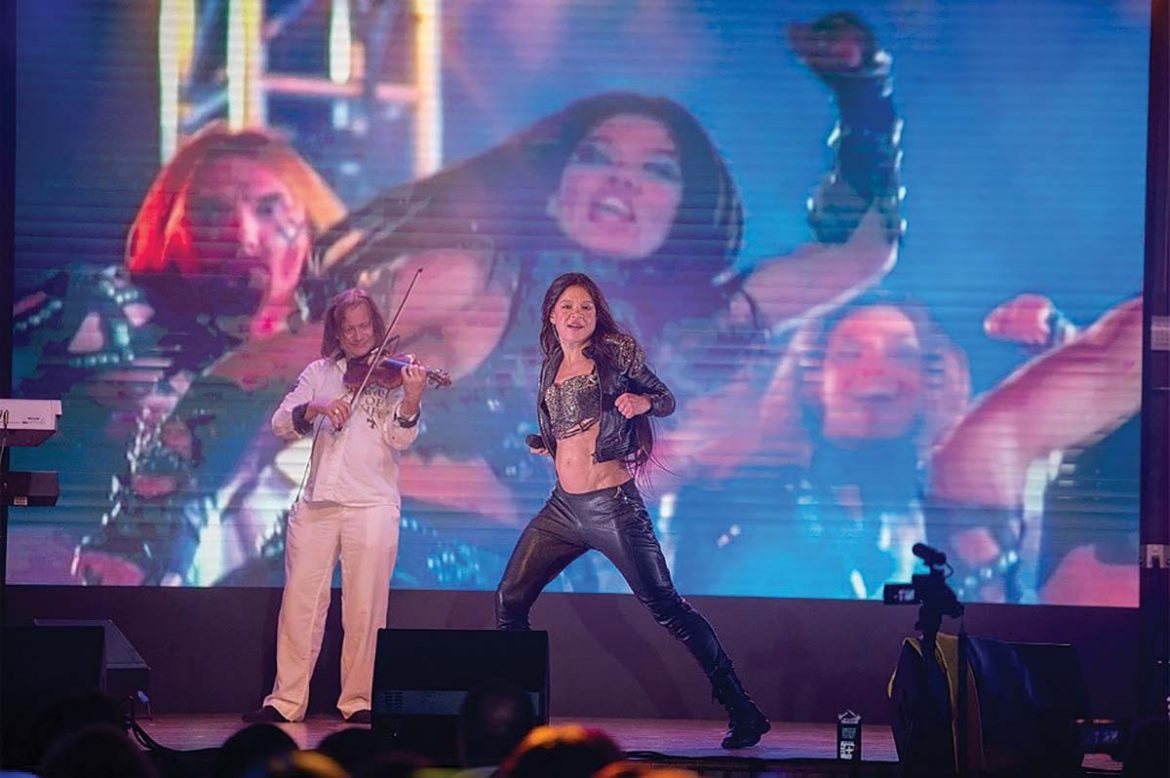 “I received an invitation [to perform] from Ukrainians in Chicago and it was extremely symbolic for me to meet Ukrainians on the other side of the ocean. It doesn’t matter where we live. It’s important where we are from!” the Ukrainian star said.

“I was happy to spend this evening with our brothers and sisters. And happy that we were together as a family. It was a unique atmosphere. And I want to note how much we, Ukrainians around the world, have changed. If we used to worry about whether we will save Ukraine, we have no doubts left. And we are already thinking about her great path and success!” Ruslana said.

Greetings were also read during the gala from several former presidents of Ukraine, among them Leonid Kuchma (1994-2005), Viktor Yushchenko (2005-2010) and Petro Poroshenko (2014-2019).  In their greetings, each highlighted the major achievements that have been made in Ukraine during the past 30 years; and they also touched on the contributions made by members of St. Andrew’s and the Ukrainian diaspora.

During his remarks, Consul General of Ukraine in Chicago Serhiy Koledov spoke about the strides Ukraine has made since it gained independence in 1991.

“In the 30 years since the day of the restoration of the independence, Ukraine has come a long way.  We have great achievements in culture, sports, science. … I see success in the future of Ukraine.  It is high-tech, industrial, a leader in the introduction of modern technologies, the breadbasket of Europe and the world, democratic and attractive for the immigration of talented people, the homeland of wealthy and healthy citizens,” Mr. Koledov said.

Oleksandr Chorniy served as the master of ceremony for the evening, which concluded with dancing to the music of Rendezvous.

Maria Korkatsch-Groszko, Ph.D., is vice-president of the Church Board of St. Andrew Ukrainian Orthodox Cathedral in Bloomingdale, Ill.