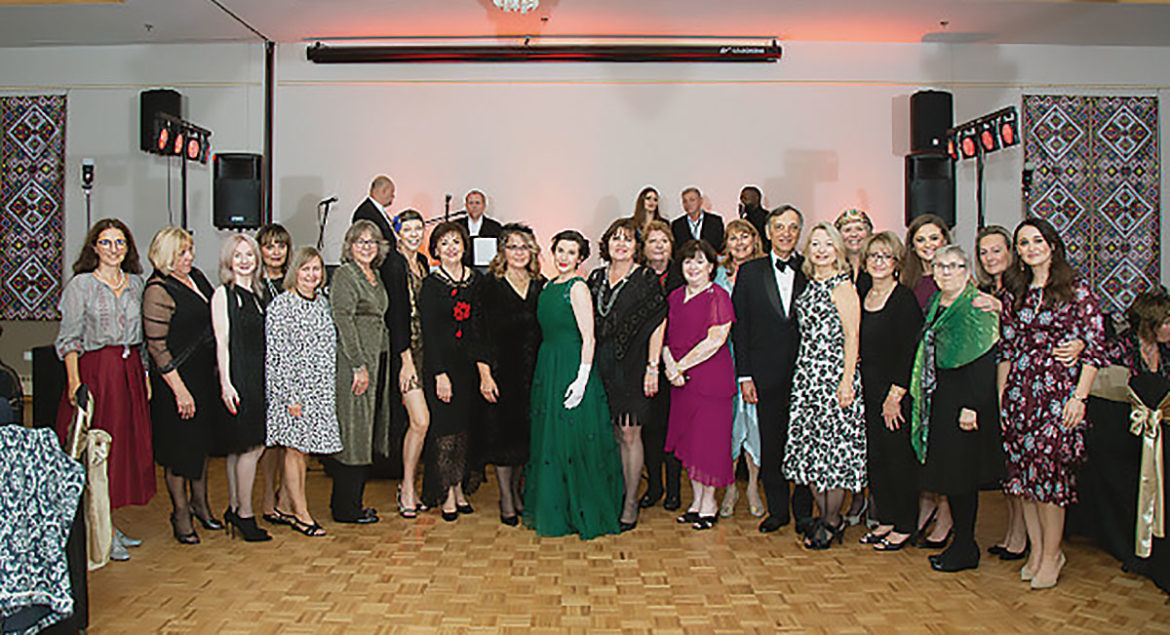 Ukrainian National Museum board members who raised funds for the exhibit of archives related to the 1933 World’s Fair in Chicago, which included a Ukrainian pavilion.

CHICAGO – When President Franklin D. Roosevelt congratulated the organizers of 1932-1933 World’s Fair called “A Century of Progress,” he said he hoped it would “bring about friendship among the nations of the earth.” Newly arrived Ukrainian immigrants understood that such a friendship could thrive only among nations that truly knew one another. So they mustered all of their resources and built one of the largest pavilions – the only national structure not sponsored by a foreign government – in which to introduce the gems of Ukrainian culture to the world.

Now, the public can view 2,500 artifacts from that pavilion at the Ukrainian National Museum in Chicago – where it is indeed bringing about friendship among the Windy City’s diverse ethnic residents who are scheduling showings of the catalogued exhibit. More and more school groups and private individuals are learning about the immigrants who enabled today’s thriving Ukrainian Village, with its gourmet restaurants, glittering domes and hot real estate values.

The UNM’s newly appointed archivist Halyna Parasiuk-Sarancha has extracted evidence of and catalogued this passionate feat from donated stacks of yellowed newspaper clippings, photographs, City of Chicago honorary pins awarded to the chairman of the pavilion planning committee, posters, menus, banners, embroideries, ceramics and even the traditional costume of 101-year-old Rosalie Deeds, who performed in renowned choreographer Vasile Avramenko’s ensemble.

The new archival exhibit is now a permanent display at the Ukrainian National Museum.

Photographs of these artifacts were elegantly integrated into a cinematic journey through the World’s Fair by executive curator Maria Klimchak and executive board member Irene Bojkewycz.

While images of the Ukrainian pavilion and its contents flashed on the screen behind her, Canadian chanteuse Stephania Romaniuk treated guests to a musical appetizer: delightful vintage renditions of waltzes by Bohdan Veselovsky as well as Gene Krupa and Benny Goodman classics performed in dainty 1930s style.

Over hot coffee and a delectable array of desserts, guests – both lifelong and newcomers – marvelled at the way newly arrived immigrants from all over the U.S. contributed everything they could scrounge – from 25 cents to $100 (today’s equivalent of $2,000) – to make the Ukrainian Pavilion possible. “If they could do it, so can we!” chimed Ms. Klimchak, inspiring a slew of contributions and bids on silent auction items procured and beautifully assembled by Victoria Kawka and Eva Sigaev.

After expressing the deepest gratitude to the Heritage Foundation of 1st Security Federal Savings Bank, the Selfreliance Foundation of Selfreliance Federal Credit Union as well as nearly 20 donors of $1,000 each, UNM President Lydia Tkaczuk invited all onto the dance floor to relish the energizing tunes of Andriy Chuyko and the Accord.

From jazz standards of the 1930s, to 1950s rock and roll, to cha-chas, polkas, waltzes and Ukrainian folk favorites like the “Hopak,” the crowd found it difficult to sit still. Even the band members couldn’t resist slipping onto the floor for that whirlwind of joy prescribed by transcendent author Lina Kostenko, and worthy of inspirational dancer Ms. Deeds.

The warm, engaging evening demonstrated Ms. Tkaczuk’s observation: the heritage, aesthetics and dreams we share truly can make us feel like family. And archival exhibits that attract and inspire visitors of other ethnic backgrounds only serve to extend that family.