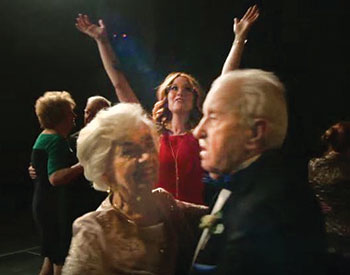 Walter and Maria Uzdejczyk dance as Igrid Michaelson performs during the filming of “Little Romance” for the “Today” show.

PARSIPPANY, N.J. – As part of the “Today” show’s special series “A Little Romance” and as part of Valentine’s Day, Walter and Maria Uzdejczyk of Yonkers, N.Y., were among six couples invited to share their “secrets” to being married for more than 50 years while on the television program on February 11.

Interviewed by Hoda Kotb, couples were asked how they met, how they came to get married and how they remain in love for more than half a century.

In its “Sweetheart Party,” couples were filmed for Hoda Kotb’s “Little Romance” music video featuring singer-songwriter Ingrid Michaelson. The Knot magazine assisted in funding the video. (Video can be found at: https://www.youtube.com/watch?v=uXX22XJyL50 and http://www.today.com/health/valentine-s-day-hoda-kotb-ingrid-michaelson-unveil-little-romance-t72951). Forty-one couples were included in the music video.

“I wrote [“Little Romance”] a long time ago, and it’s about just a sweet kind of love between two people,” Ms. Michaelson told “Today” about her song. “It makes sense for this video because it’s the idea of a love that’s been around between two people for a long time. I think this video will instill hope in people that love can last,’’ Ms. Michaelson said. “I think it’s really inspirational to see people that have made it through.”

Oksana Tomaszewsky, daughter of Mr. and Mrs. Uzdejczyk and the one who submitted her parents’ names as among the five couples selected, recalled her surprise when the “Today Show” telephoned her.

The outing, hosted by Hoda Kotb, included a fancy dinner at Cipriani’s with tuxedos and ball gowns. The motto of the evening was “live, laugh, love.”

In one of the video outtake clips, Mr. Uzdejczyk, 91, can be seen showing off his tap dancing skills. Mrs. Tomaszewsky explained that he had been a Ukrainian dance instructor for 25 years in Yonkers, N.Y. “The whole experience was wonderful,” she added, and the “Today” show provided car service to and from New York City.

In a second segment, the Today show featured more than 20 couples who had been married more than 50 years to share their advice for couples.

The “Today” show explained that the idea for the video’s storyline came from yearly Golden Couples parties held in New York City. Couples were selected based on their love story and their dancing skills with “Today.”