WASHINGTON – The first Ukrainian Day advocacy event sponsored by the Ukrainian National Information Service (UNIS), the Washington public affairs bureau of the Ukrainian Congress Committee of America (UCCA), was held on Wednesday, June 12, in the nation’s capital. Nearly 50 community activists from 11 states descended upon Washington to promote issues of concern, including a robust Russia sanctions regime and enhanced U.S. assistance to Ukraine.

The full-day of events began with a breakfast briefing session in the Rayburn House Office Building, during which several speakers cited the importance of advocacy events for Ukrainian American concerns. 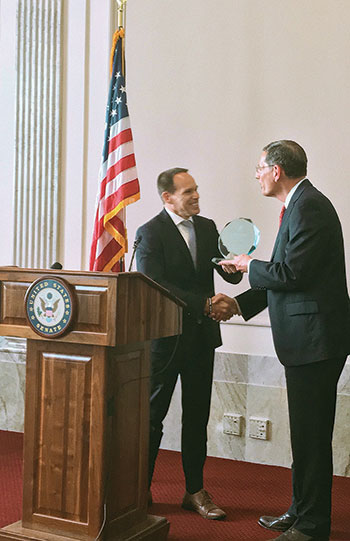 Jim Gerlach, former congressman from Pennsylvania and a former co-chair of the Congressional Ukrainian Caucus, delivered observations from the perspective of Congress. “Members of Congress highly value and appreciate the efforts of their constituents to visit Washington, D.C., to discuss issues of importance to them,” stated Mr. Gerlach. “It’s your responsibility and duty as civic-minded individuals and constituents to provide your viewpoint and seek congressional support for those issues that enhance U.S. national security interests.”

In an overview of the issues facing congressional action, UNIS Director Michael Sawkiw Jr. briefed the participants on the topics to present during their meetings with congressional offices on Capitol Hill. 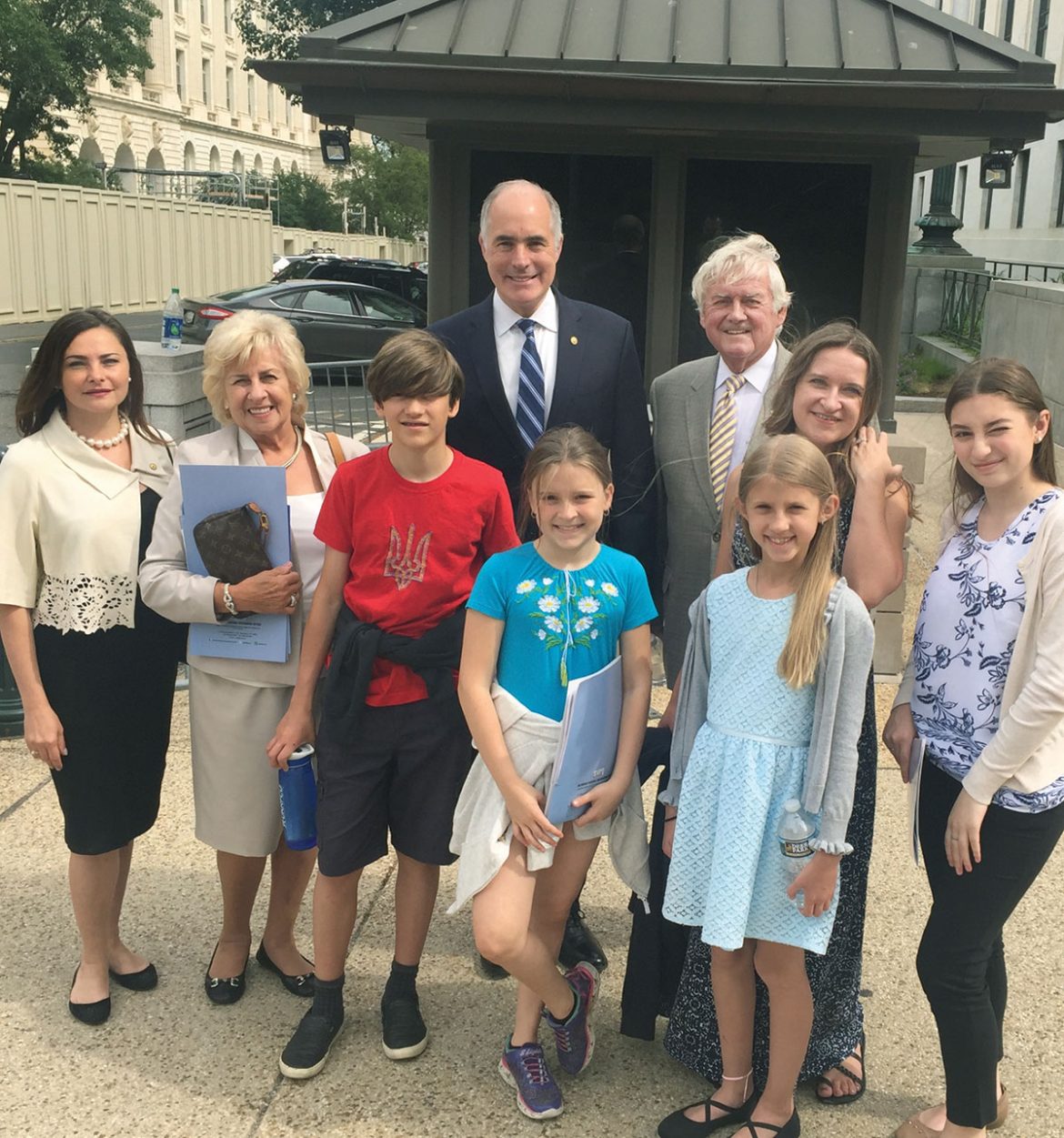 The issues affecting the community include: sanctions against the NordStream 2 pipeline from Russia to Central Europe; increased defensive military assistance to Ukraine to deter continued acts of Russian aggression; an increase of Russia sanctions through the Defending American Security Against Kremlin Aggression Act of 2019 (DASKAA); work toward securing a diversified European energy sector; resolutions commemorating the fifth anniversary of the Revolution of Dignity; and the promotion of additional members to the Ukraine caucuses in the House of Representatives and the Senate.

As was the case with previous advocacy events, the intent of Ukrainian Day was to promote the Ukrainian community’s contacts with its elected representatives in Washington. The significance of this effort was accentuated this year, as newly elected legislators make up 20 percent of the new 116th Congress, and knowledge of Ukrainian issues is critical in obtaining their future support. 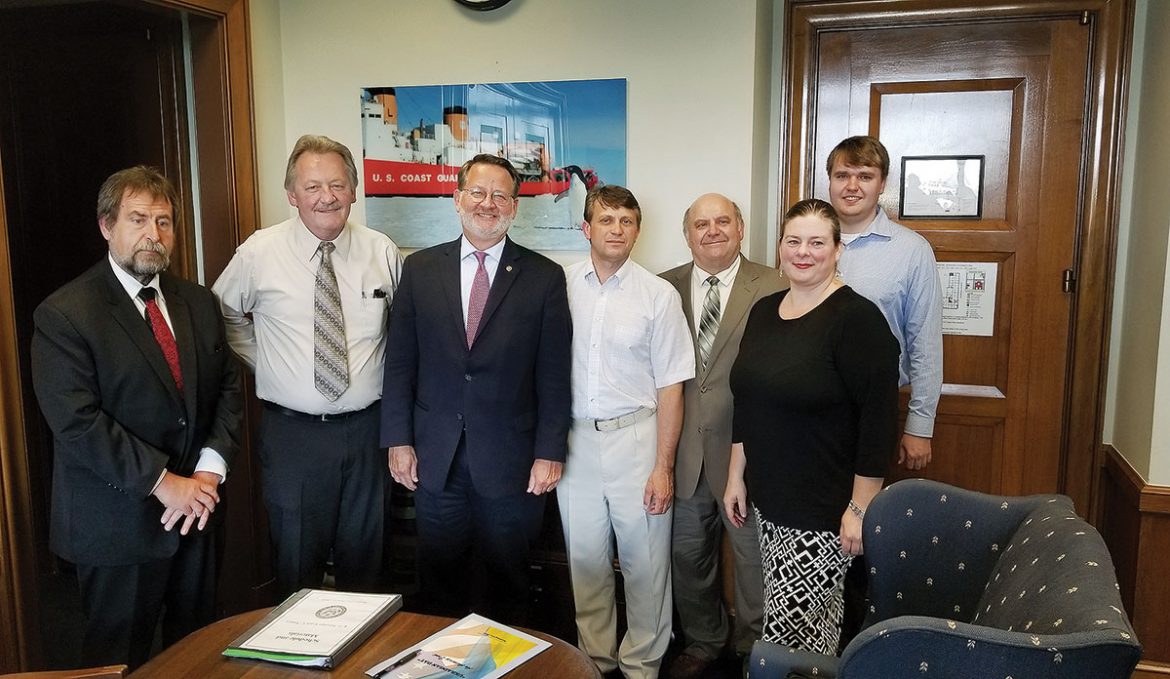 Following the briefing session, the community activists set out to meet with their respective senators and representatives to promote greater support for Ukraine. Joining the Ukrainian American constituents were community leaders from the Central and East European Coalition (CEEC), which encompasses 18 national ethnic organizations that represent nearly 22 million Americans of Central and East European descent. The UCCA was a founding member of the CEEC in 1994. Together, the CEEC and the UCCA have co-sponsored advocacy events in Washington and issued policy briefs that summarize issues the CEEC ardently advocates.

Ukrainian Day participants visited nearly 50 offices in the Senate and House of Representatives. 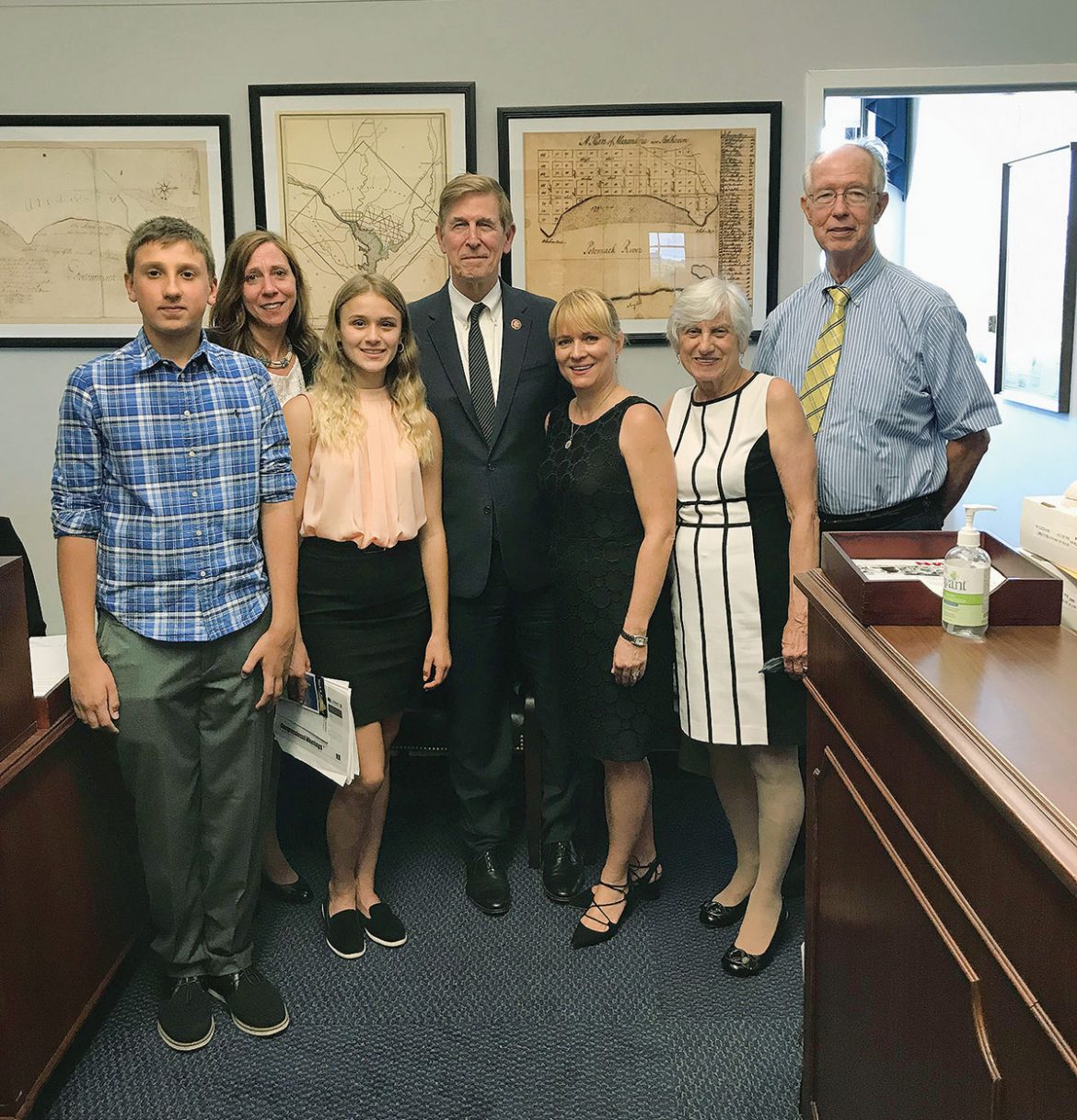 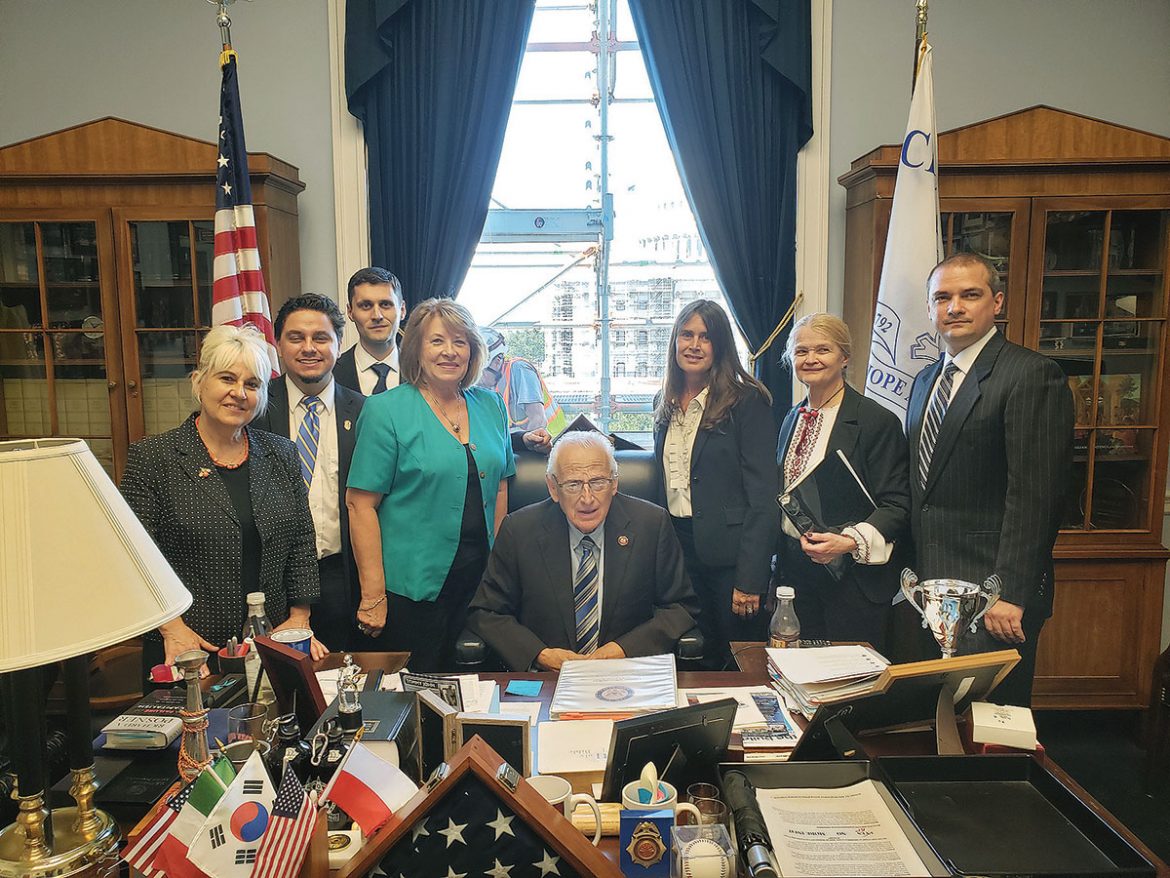 As is traditional, the advocacy event program also included an evening congressional reception held in the Russell Senate Office Building to honor elected officials for their efforts to support greater U.S.-Ukraine relations.

The newly enthroned metropolitan of the Ukrainian Catholic Church in the U.S., Archbishop Borys Gudziak of Philadelphia, graciously delivered the invocation for the event. The reception was also highlighted by remarks from UWC First Vice-President Romaniw, UCCA President Futey and Ambassador Valery Chaly, Ukraine’s envoy to the United States. The ambassador relayed information that the capital of Ukraine will now be spelled by its true transliterated name – Kyiv – as compared to the previous Russia-based transliteration (Kiev). Kyiv will now appear on all international signage.

Several special guests from Ukraine were introduced at the reception, including four members of Ukraine’s Parliament: Hanna Hopko, chairperson of the Foreign Relations Committee; Borys Tarasyuk, former foreign affairs minister of Ukraine; Volodymyr Ariev; and Viktor Vovk. Ms. Hopko and Mr. Tarasyuk thanked the U.S. Congress for its support of Ukraine-related issues, in particular helping to deter Russian aggression in its various forms. 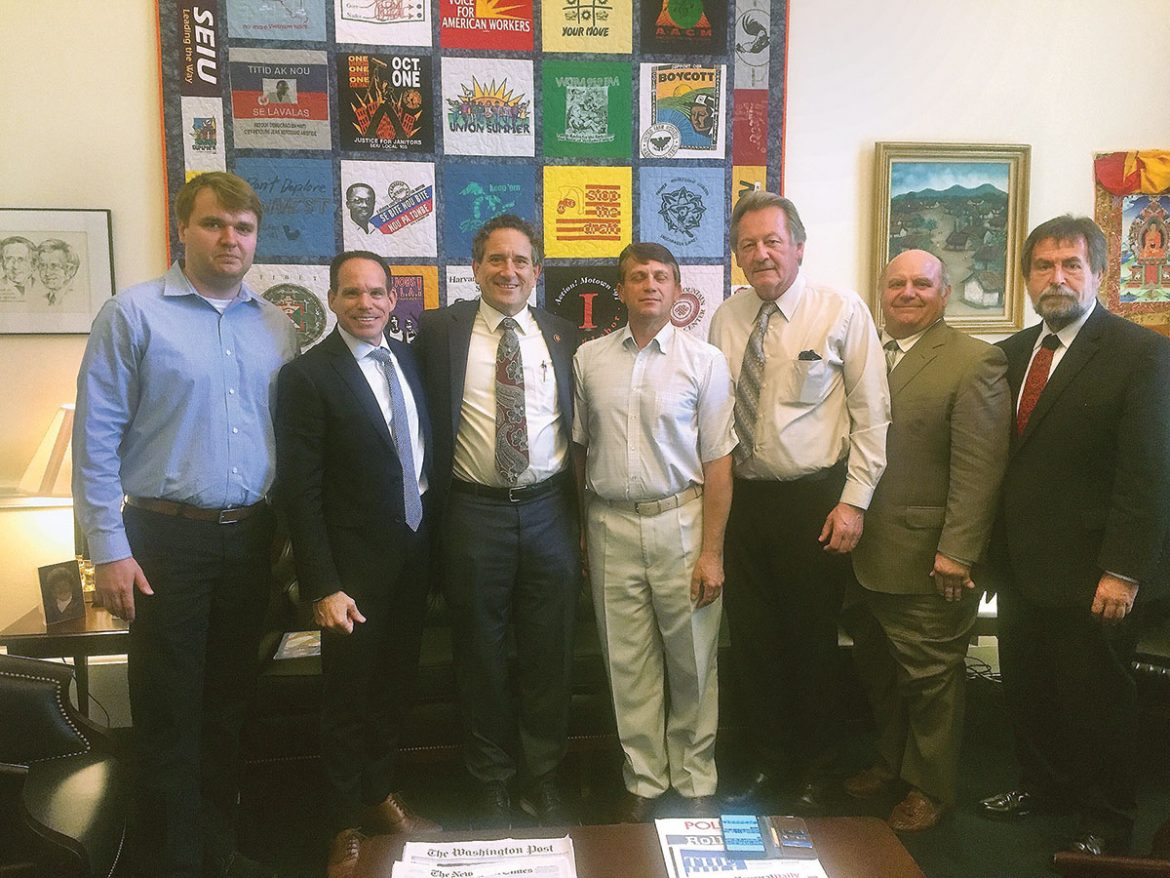 This year’s recipients of the Friend of UNIS award included Sen. John Barrasso (R-Wyo.), recognized for his unwavering attempts to halt the NordStream 2 pipeline to counter Russia’s monopoly of energy in Europe, and Rep. Brian Fitzpatrick (R-Pa.), co-chair of the Congressional Ukrainian Caucus, cited for his leadership in the caucus, as well as his advocacy of greater cybersecurity assistance for Ukraine. Both elected officials expressed their sincere gratitude for the award and mentioned the importance of continued efforts by the Ukrainian community to bring issues to the attention of Congress.

Sen. Barrasso spoke of his recent trip to Ukraine and the need to continue supporting the country in its reform process.

Rep. Fitzpatrick later mentioned: “I was honored to be recognized by the Ukrainian National Information Service and thank them for their work. As co-chair of the Congressional Ukraine Caucus, I have never wavered in my support of Ukrainian sovereignty and condemning Russian aggression. I will continue to stand with the Ukrainian people, who have demonstrated time and again their will for a sovereign and democratic country.” 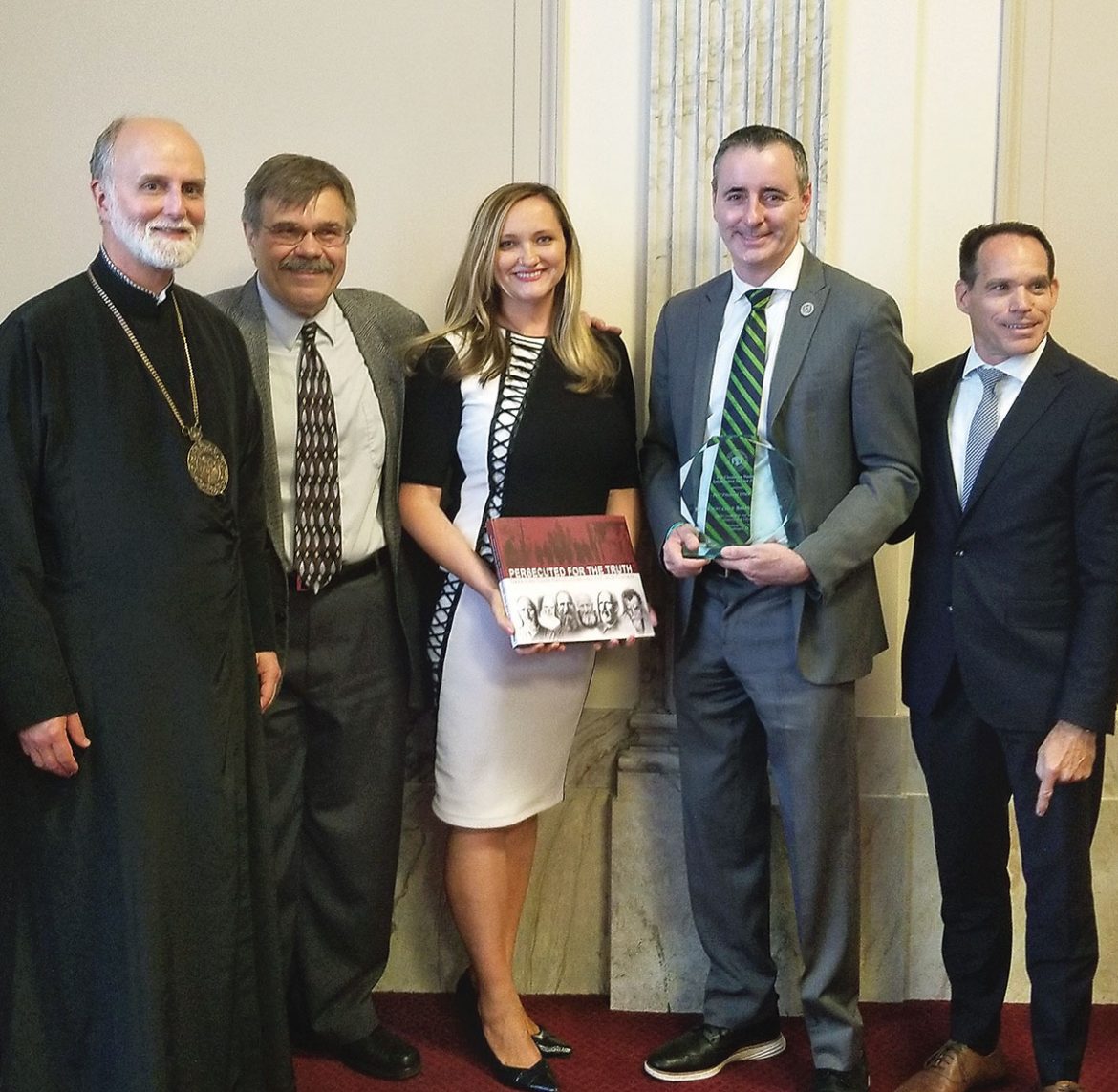 Ms. Bakkalli stated: “As a representative of the Crimean Tatars, it is important that our presence and support be visible on the congressional and Senate sides as it relates to the work on H.R. 596, the Crimea Annexation Non-Recognition Act. I have been participating in the Ukrainian Days advocacy events since 2014. I see it as a critical and highly effective platform to communicate to American officials about the persecution and human rights violations committed against the indigenous Crimean Tatars that are occurring daily on the illegally Russian-occupied Crimean peninsula of Ukraine.”

Brad Freden, director of the Office of Eastern European Affairs at the U.S. Department of State, spoke of the State Department’s commitment to the continued sovereignty, independence and territorial integrity of Ukraine, as evidenced by the Crimean Declaration issued in July 2018.

Also in attendance at the reception were many congressional staffers and friends of Ukraine, as well as Myroslava Matwijiwskyj, a representative from the Ukrainian community in Great Britain. 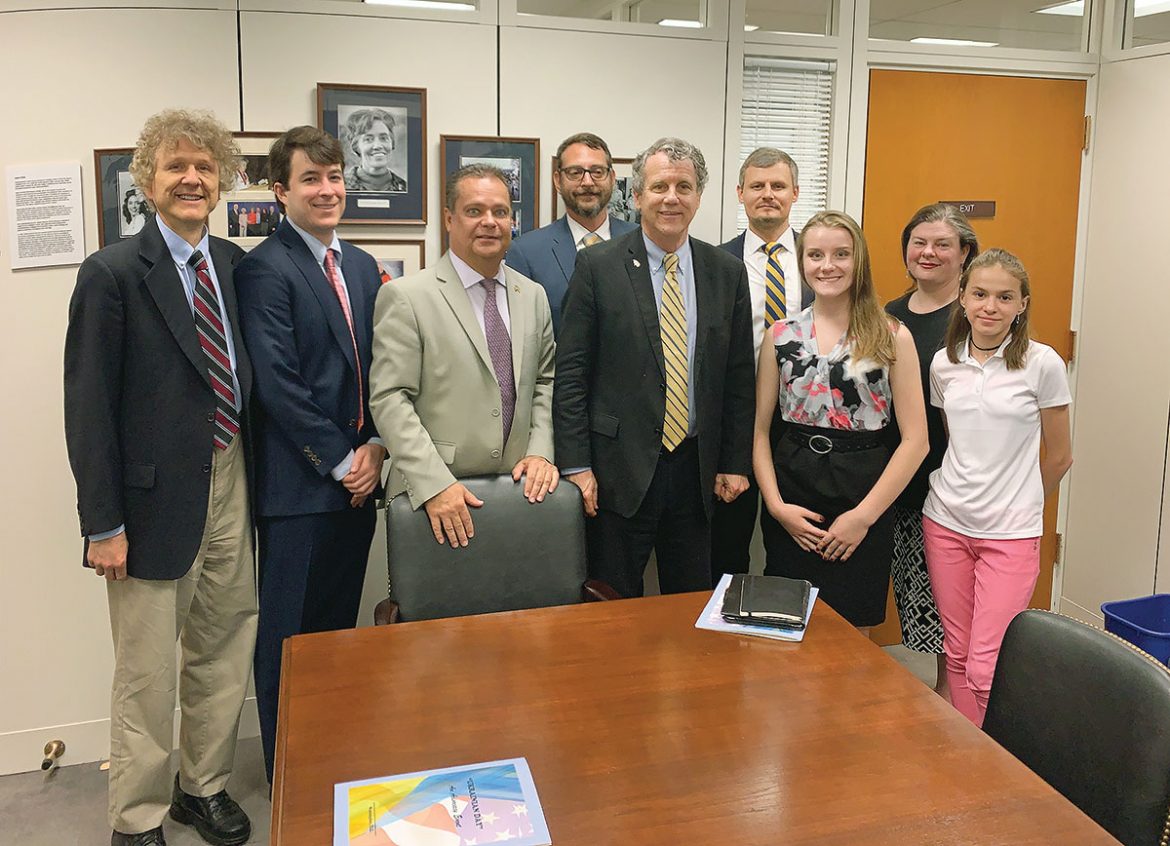 UNIS Director Sawkiw underscored that such advocacy events are essential for expanding the community’s influence on U.S. policy toward Ukraine. “Now our community has a chance to develop a closer relationship with our friends in Congress, as well as with newly elected Members of Congress. It is incumbent upon the United States to demonstrate support for Ukraine through an increased Russia sanctions regime and continued support for Ukraine’s defensive forces. There are many important tasks that still lie ahead,” he noted.

Of unique importance was the participation of over a dozen students from the Youth Civics Group of the Ukrainian Heritage School of the Philadelphia metropolitan region. The group, consisting of high school students with an affinity for public service and civic-minded activism, visited various congressional offices during their meetings. Iryna Galaj and Eugene Luciw serve as the youth group’s mentors and have provided leadership and guidance in their civic activism.

In commenting on their experience in Washington, these future leaders of the Ukrainian community said they conveyed messages about Holodomor education and awareness, a Ukraine that is free from foreign aggression, and the importance of the United States building a strong relationship with Ukraine. The students had an opportunity to meet with various senators and members of Congress.

First-time participants Brian and Inya Tunstall from Virginia commented on their Ukrainian Day experience. “This was our first Ukrainian Day participation, but not our last. The day was very well organized and extremely gratifying. We were able to speak with staffers of our congressmen, inform them of issues in Ukraine, ask for their continued support. And they were very receptive,” said Ms. Tunstall.

In all of the advocacy meetings on Capitol Hill, the participants of Ukrainian Day presented members of Congress with various policy papers on issues of importance to enhanced U.S.-Ukraine relations, lists of the Congressional Ukrainian Caucus and the Senate Ukraine Caucus, as well as informational brochures about the Ukrainian Congress Committee of America, the Ukrainian National Information Service and the Ukrainian Genocide of 1932-1933. A complete list of congressional actions to support newly introduced bills and resolutions in support of Ukraine was also included in the advocacy folder.

Understanding that not everyone was able to attend the Ukrainian Day advocacy event in June, UNIS encourages the Ukrainian American community to make every effort to meet with elected officials at their respective local district offices. Copies of the policy papers presented at Ukrainian Day may be obtained at the Ukrainian National Information Service.

Additional photos and information can be found on the UNIS Facebook page and Twitter/Instagram feed, #UkrDays2019.