Ambassador Sergiy Kyslytsya, permanent representative of Ukraine to the United Nations (center wearing coat and tie), and Ukrainian Consul General in New York, Oleksii Holubov (to the right of Mr. Kyslytsya), gathered with performers, consular and mission staff, as well as Ukrainian diaspora representatives and members of the press at the conclusion of an event in New York to celebrate Ukraine’s 30th anniversary of renewed independence on August 24.

NEW YORK – Ukrainian diplomatic missions around the world continued marking the 30th anniversary of Ukraine’s renewed independence on August 24.  The celebrations continued even after the final fireworks had been extinguished in Kyiv. One such event took place here, in the city at the crossroads of high diplomacy.

Following on the success of its virtual independence day celebration in August 2020, which was notable in that it featured prominent participants and an extremely reach program, the Permanent Mission of Ukraine to the United Nations set its sights on an even larger gathering this year.

Ambassador Sergiy Kyslytsya, permanent representative of Ukraine to the United Nations, delivered welcoming remarks. Representatives of Ukraine’s diplomatic and consular corps, Ukrainian American and Crimean Tatar community representatives, media, clergy and guests then stood at attention for the singing of Ukraine’s national anthem, which was performed by the Permanent Mission’s first secretary, Yaroslava Sochka, and Andrij Dobriansky of the Ukrainian Congress Committee of America (UCCA).

For Mr. Szczerski, this was a doubly auspicious event as it marked his first public event as the permanent representative of Poland.

As co-host of the event, Ukraine’s consul general in New York, Oleksii Holubov, addressed the guests.  He thanked members of the Ukrainian American diaspora for their tireless work in the lead up to the restoration of Ukraine’s independence in 1991. To underscore this message, he invited Volodymyr Kozicky, president emeritus and honorary chairman of the SUMA Federal Credit Union, to say a few words to the assembled diplomats about what Ukraine’s independence means to Ukrainians in the diaspora.

The highlight of the evening’s celebration was the lively and colorful cultural program that followed. Kalyna and Uliana Leshchuk of the bandurist duet “Malvy” introduced many of the international guests to such Ukrainian classics as “Cheremshyna,” “Ukrayina,” and “Rushyv poyizd v daleku dorohu.”

Also performing throughout the evening were members of the New York Crimean Tatar Ensemble, composed of three generations of performers. Their performance was made possible with the assistance of Ayla Bakkalli, a representative of the Congress of Crimean Tatars and a consultant to the Permanent Mission of Ukraine on indigenous matters.

Dinara Faizova, honored artist of Crimea, performed traditional dances alongside her son Yunus Faizov.  The pair were accompanied by Ms. Faizova’s husband, Rustem Faisov, on accordion and violinist Nariman Asanov, who is also the president of the American Association of Crimean Turks. The legendary Uriye Kermenchykli, Ms. Faizova’s mother, concluded the ensemble’s performance with a moving rendition of “Ey, Güzel Kırım.” 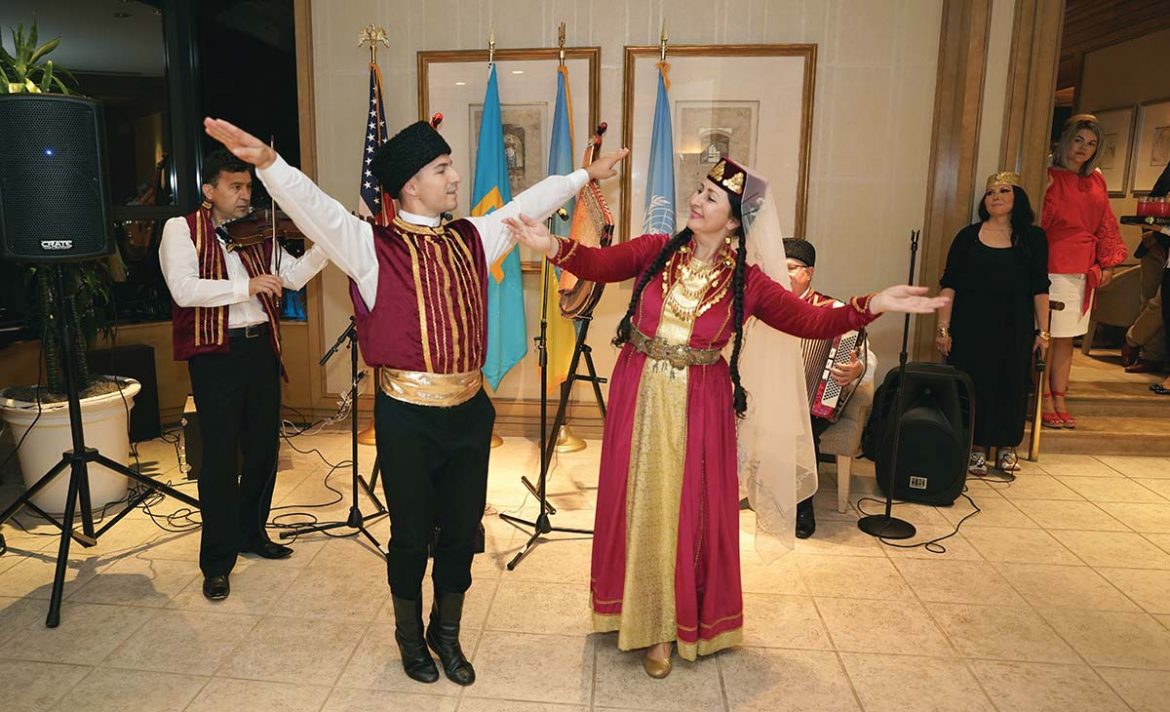 Members of the New York Crimean Tatar Ensemble, which performed during the event on August 24, are (from left to right): Nariman Asanov (violin), Yunus Faizov (dancer), Dinara Faizova (dancer), and Rustem Faisov (seated with accordion). Ayla Bakkalli (in black holding microphone), a representative of the Congress of Crimean Tatars, introduced the ensemble.

A smiling addition to the catering staff was Veselka owner Jason Birchard, who stepped in to personally tend the bar throughout the evening. Guests were treated to a menu of Ukrainian delicacies specially prepared for the event by Dima Martseniuk, executive chef at the restaurant Veselka in New York’s East Village neighborhood. Famed Ukrainian chef Yevhen Klopotenko previously called Mr. Martseniuk an “ambassador” of Ukrainian borscht in the United States.

Mr. Martseniuk previously collaborated with the Permanent Mission of Ukraine to the U.N. and the Consulate General of Ukraine in New York at several events throughout the year.

At the conclusion of the evening, Alla Volska of the Permanent Mission oversaw a door prize raffle so that some of the guests could leave with a more permanent reminder of Ukraine.

Due to a range of public health related restrictions resulting from the ongoing COVID-19 pandemic, the organizers had no choice but to hold the event in a rather limited format.

Organizers of the event, however, hope to expand such gatherings in the future, once public health guidance allows for more elaborate celebrations.