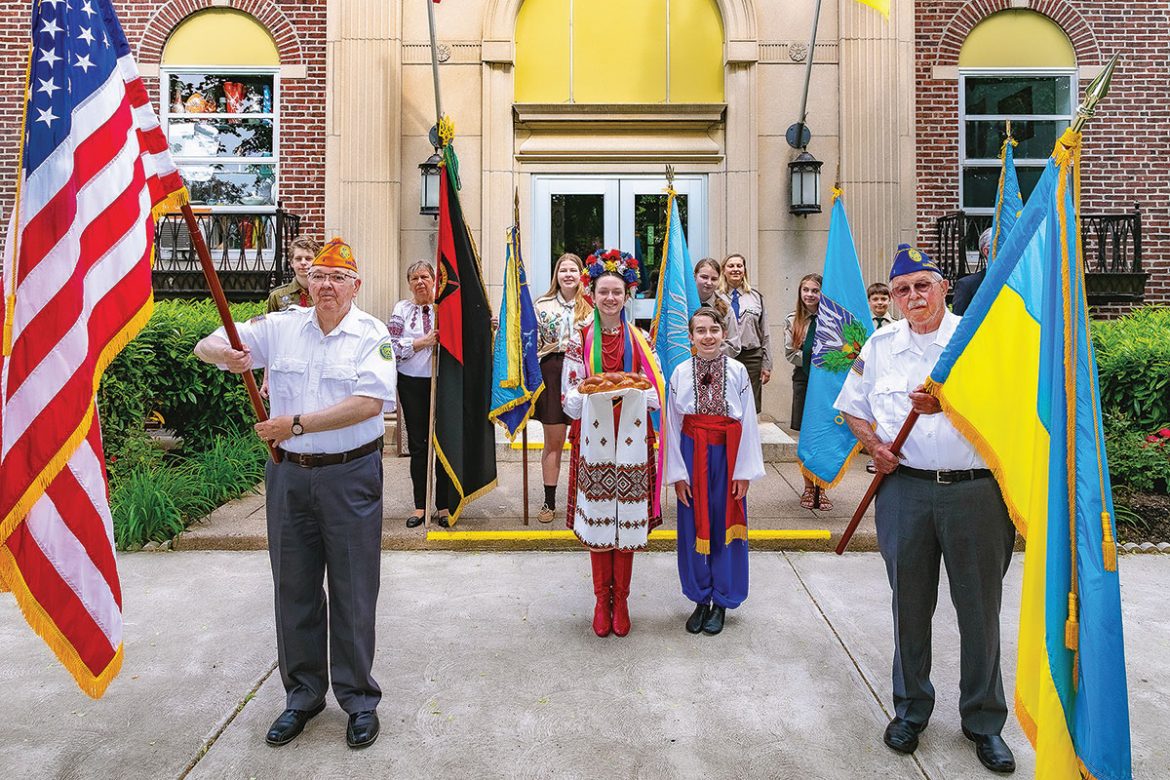 Participants of the UECC’s 40th anniversary celebration took part in a flag procession at the opening ceremony.

JENKINTOWN, Pa. – The Ukrainian Educational and Cultural Center (UECC) in Jenkintown, Pa., marked its 40th anniversary with a virtual celebration posted on its webpage, YouTube and Facebook. The video paid particular tribute to the nine presidents of the UECC who led the numerous Boards of Directors in serving the Ukrainian-American community of the greater Philadelphia area over those 40 years. Also commemorated in the 40th anniversary video celebration held on June 13 was the Philadelphia Ukrainian Selfreliance Federal Credit Union for its generous financial support of the UECC from the time of the center’s founding through to the present day.

The Masters of Ceremony for the video were Natalka Panczak Firko, current UECC board president, and Yuliya Stupen, UECC board member. From the newly renovated clubroom, the two gracefully guided viewers through the 90-minute celebration in both English and Ukrainian. All of the UECC presidents will be memorialized in the renovated room with handmade tiles designed and painted in the Hutsul style by UECC board member Iryna Galai, who was also the mastermind behind the clubroom design, which was funded by the Chere­mosh Hutsul Society of Philadelphia.

The video opened with the procession of flags by representatives of the Ukrainian American Veterans, Anthony Bilyi Post Number 1, the Society of the Ukrainian Insurgent Army, the Organization for the Defense of Four Freedoms for Ukraine, the Ukrainian American Youth Association and the Plast Ukrainian Scouting Organization, with musical accompaniment by bandurists Shabli Kobzariv. After the completion of the procession, siblings Maya and Roman Kowal greeted viewers with the traditional Ukrainian welcome of bread and salt. Metropolitan-Archbishop Borys Gudziak formally began the festivities with an opening prayer.

Interwoven with the presidential presentations were celebratory greetings and musical performances. Making congratulatory remarks were Iryna Mazur, honorary consul of Ukraine in Philadelphia on behalf of herself and Oksana Markarova, ambassador of Ukraine to the United States; greetings were also extended by Reps. Brian Fitzpatrick, Madeleine Dean and Brendan Boyle; as well as from Andrij Futey, president of the Ukrainian Congress Committee of American; Ruslana Fartachuk, administrator of the Ukrainian Learning Center for Children (“Svitlychka”); and Olha Kostiv, director of the Ukrainian Heritage School.

Ms. Firko expressed gratitude to the leadership of the Ukrainian Selfreliance Federal Credit Union on behalf of the UECC administrations, past and present, for its constant and magnanimous financial support of the center, which totals nearly $1 million to date.

In response, Roman Petyk, president of the credit union, acknowledged Ms. Firko’s response and congratulated the UECC boards of directors of the past 40 years on the dramatic impact they and the UECC institution have made on the unification of the Ukrainian community of the Philadelphia area and the preservation of the Ukrainian heritage beyond the borders of Ukraine. 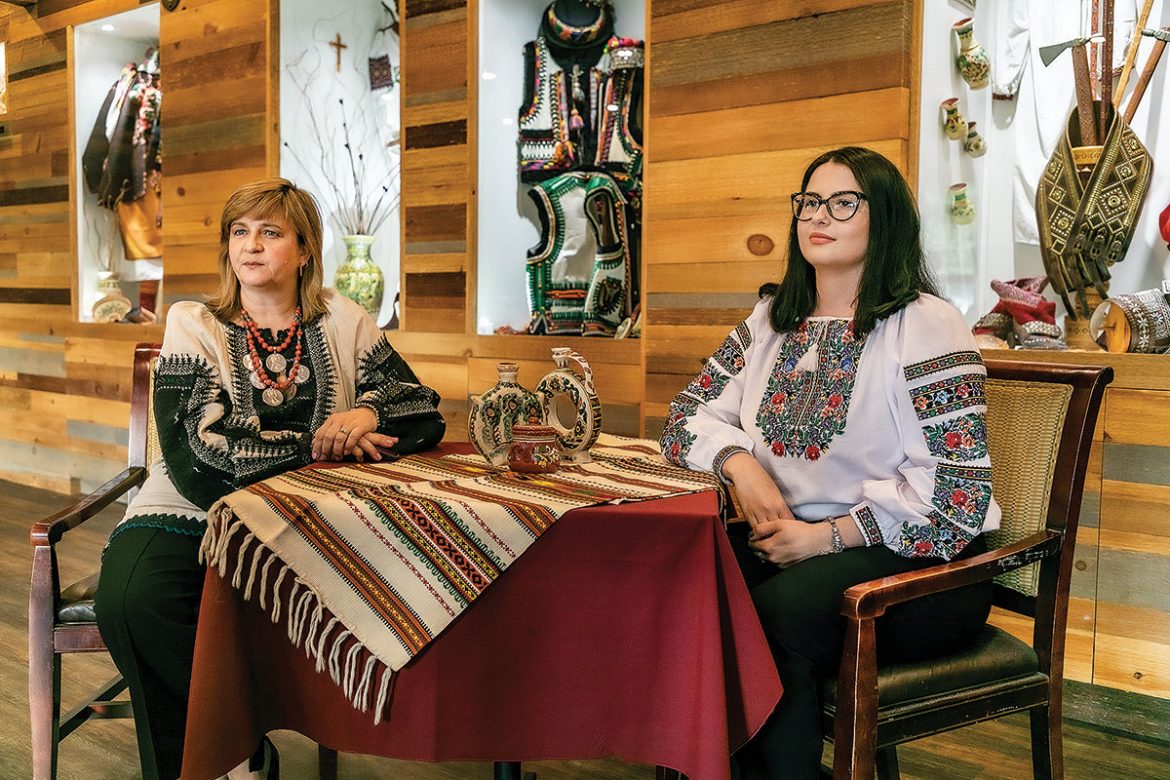 The masters of ceremony for the UECC’s 40th anniversary celebration were Natalka Panczak Firko (left), current UECC board president, and Yuliya Stupen, UECC board member.

Dynamic musical performances throughout the event were made by Prometheus Ukrainian Male Chorus, the Metropolitan Ballet Academy and Company, the Accolada Chamber Choir, Soloveyky Children’s Choir, Dzvin Ukrainian Male Folk Choir, the Voloshky School of Ukrainian Dance, the Voloshky Ensemble and the Ukrainian Bandurist Chorus of North America. All of the performers, with the exception of the Ukrainian Bandurist Chorus of North America, are based at the UECC.

The video was produced by Stephen Fartuszok (videographer) and Andrij Dob­rian­sky (video editor) and can be viewed at www.ueccphila.org. Also posted on the Center’s website is the 40th Anni­versary Commemorative Booklet, which includes numerous official greetings, the UECC presidential biographies, a recognition of the Ukrainian Selfreliance Federal Credit Union, write-ups on the 40th anniversary performers and numerous institutional and personal greetings. The booklet editorial staff was comprised of Jaroslawa Halaway, Sofia Zacharczuk and Xenia Panczak Zacharczuk.

The overall planning of the UECC’s 40th anniversary celebration was overseen by Zenia Brozyna, UECC board member and Program Committee chair. The celebration was originally planned for the spring of 2020, but the COVID-19 pandemic struck and pushed the event back. It was then rescheduled for the fall of 2020, again rescheduled for the spring of 2021 and finally planned as a virtual commemoration.

The Board of Directors of the UECC extended sincere gratitude to the many individuals and organizations who generously donated to the UECC on the occasion of its 40th anniversary. To date, the donations have totaled more than $35,000. The funds will be used to support the board’s current five-year strategic plan. Individuals interested in supporting the cause may still donate to the center via its webpage (www.ueccphila.org) or by mail (UECC, 700 North Cedar Road, Jenkintown, PA, 19046). All donations are tax deductible.