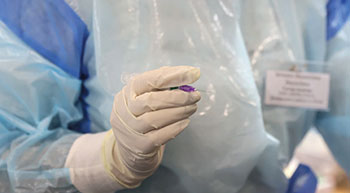 A medical professional prepares to administer a COVID-19 vaccine to a patient in Ukraine. Some 1.5 million Ukrainians have received vaccines.

LVIV – Ukraine’s Cabinet of Ministers lowered the country’s COVID-19 danger level to green, the lowest designation, and eased certain pandemic measures, particularly those requiring self-isolation and requirements for mass events and social distancing. It did, however, extend an emergency COVID-19 lockdown categorization until August 31, the country’s prime minister said on June 17.

“The current epidemic situation in Ukraine allows us to say that the whole country meets the indicators of the lowest epidemic danger,” said Viktor Liashko, Ukraine’s health minister.

“But I emphasize that despite the improvement of the epidemiological situation, we should not forget that COVID-19 has not been countered. None of the European countries where the situation with both disease and vaccination improved has completely lifted restrictive measures,” Mr. Liashko said.

While the government has allowed mass events to be held indoors without limiting the distance between those present, it has implemented a requirement that participants and organizers of events are must wear protective masks or respirators, according to Prime Minister Denys Shmyhal. If individuals who attend large gatherings have had negative COVID-19 test results no more than 72 hours before the event, or if they are completely vaccinated, then the restrictions do not apply.

“I urge every Ukrainian to be reasonable, every entrepreneur to be responsible, and every official to encourage communities to mobilize and self-organize,” Mr. Liaskho said. “And, remember, the best protection against COVID-19 is vaccination. Now everyone can get a jab in mass vaccination centers.”

On June 12-13, more than 50 mass vaccination centers were operating in 15 regions throughout Ukraine, including in the capital, Kyiv. At the moment, these centers are open only on weekends.

The opening of such centers is an initiative of local authorities in response to residents’ requests to be vaccinated. They have been opened in stadiums, educational and cultural centers, shopping malls and medical facilities.

The Health Ministry has called on city authorities to open additional vaccination centers. The ministry has said that there are enough vaccines and teams trained to work with them to vaccinate the Ukrainian population.

Mr. Shmyhal said that vaccination rates continue to increase in Ukraine, primarily due to the increased supply of vaccines from manufacturers with which Ukraine has agreements and contracts.

Mr. Shmyhal emphasized that one of the priorities in terms of cooperation with other countries is restoring and growing the flow of tourists to Ukraine. He spoke about the documents that Ukrainians will use as confirmation of vaccination for free border crossing and travel.

“The COVID-19 certificate is still under development and will be put into force after the approval of international requirements from the European Union and the World Health Organization. We tentatively plan to launch it in July. The certificate will be available in paper form in healthcare facilities and e-form through the Diia [action in Ukrainian] app. In addition, the document will contain information not only about vaccination but also about the negative results of PCR tests or recovery after COVID-19 and the presence of antibodies,” Mr. Shmyhal said.

“From now on, our citizens who have received a certificate of full vaccination will be able to travel freely to Moldova. We are working to increase the list of countries open to Ukrainians,” Mr. Kuleba said.

Ukraine also faces the possibility that a new strain of COVID-19 may come to the country from Russia in the fall. According to the press service of the National Academy of Sciences of Ukraine, the Delta strain can cause a more significant wave of infections in Ukraine. The previous peak in Ukraine occurred in early April.

The latest news about the spread of the Delta strain, first found in India, is of concern to scientists. On June 11, England reported that it was 1.6 times more contagious than the Alpha strain (first found in the U.K.), and 2.26 times more likely to lead to hospitalization, and 1.45 times more likely to lead to resuscitation, though health experts have said that current vaccines remain effective against the Delta strain.

This strain is already prevalent in Russia. Its share there is estimated to be responsible for a quarter of all COVID-19 morbidity cases in Russia. Moreover, there is a rapid increase in morbidity in Russia concentrated in the two largest cities in the country – Moscow and St. Petersburg. The number of cases in Moscow has doubled in the past week, and unofficial sources point to a rapid increase in the number of hospitalizations in both cities.

The registered morbidity in Europe is now close to the level in Ukraine. In most countries, the epidemic situation has improved rapidly. The incidence is rising in three countries: the Russian Federation, the United Kingdom and Portugal, with the Delta strain most prevalent in these countries.

“In our opinion, it is worth considering the feasibility of establishing additional controls and restrictions on migration between Ukraine and countries in which the share of the Delta strain is rapidly increasing, to delay the spread of this strain in Ukraine,” said a group of scientists in a report issued by the National Academy of Sciences of Ukraine.

“Given the large volume of migration from Russia, we can expect that a new wave of COVID-19 may begin in eastern Ukraine. However, its onset significantly depends on the share of the Delta strain in Ukraine, which is currently unknown. With insufficient control of international migration and low vaccination rates, a new wave may begin earlier in the fall,” the report said.

“Given the situation with the spread of the Delta strain globally, it seems important to research the presence of antibodies in the population and sequencing of strains common in Ukraine,” the statement added.

On May 31, the World Health Organiza­tion decided to label the strains of COVID-19 with letters of the Greek alphabet. Those variants include the Alpha strain, which was discovered in the U.K., the Beta strain found in South Africa, the Gamma strain ound in Brazil, and the Delta and Kapa strains found in India.

According to media reports, as of June 14, the Delta strain was found in 74 countries. Outbreaks of Delta have been reported in Africa, Scandinavia, China, the United States and countries in the Pacific Ocean.

According to the Public Health Center of Ukraine, as of June 15, there have been 1,014 new cases of COVID-19 in Ukraine. The COVID-19 vaccination campaign started on February 24. Since that time, 1,507,801 people have been vaccinated with a first dose and 260,755 people have received a second dose of the vaccine.

During the entire pandemic in Ukraine, 2,224,992 people have contracted COVID-19, 2,136,176 people have recovered and 51,769 people have died, according to official statistics from the Ukrainian government.