Maria Hanchuk pitches during a softball game for the Endicott College Gulls.

All Mark and Christine Hanchuk’s youngest daughter wanted was to continue her softball pitching career at the college level. She also very much wanted to pursue a degree in her chosen fields of marketing, communications and advertising. Maria Hanchuk was also very attracted to Endicott College’s internships, which the school offers to select students all four years of their undergraduate study, and she was enraptured by the university’s beautiful campus and its proximity to the historical metropolis of Boston.

With all of these considerations in mind, it could seem as though the young Ukrainian lady had a master four-year plan to capably prepare herself for professional adult life, while also making the most of a college experience.

Yes, 2020 was setting up to be a most special year, until the COVID-19 pandemic changed the world.

Maria decided to attend Endicott College for several reasons, including that her older sister Julia studied there and she really liked the softball program. Freshman year’s realization that softball is a year-round commitment on top of a full load of classes was an adjustment she easily adapted to and actually enjoyed.

In mid-March of 2020, however, Endicott and its conference, the Commonwealth Coast Conference, canceled all sports for the spring season. The only good to come from the move was that spring athletes were granted an extra year of collegiate sports eligibility. 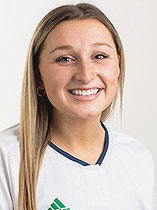 Maria spent the year practicing, scrimmaging and working on the mental and physical aspects of being a pitcher. Last summer she practiced with her father, sneaking onto the South Windsor, Conn., softball field where she starred for four years as a high school athlete. The plan for her included intense programs of weight-training, conditioning and pitching lessons with the goal of contributing to the team in 2021, and winning the CCC championship.

Mission accomplished! Following a lost freshman year where she never appeared in a game, Maria Hanchuk proved to be dominant in her debut season facing collegiate hitters.

She led her Endicott Gulls in wins (8), earned run average (0.29) and strikeouts (72). She was selected the Commonwealth Coast Conference’s pitcher of the year and earned All-CCC first team status. She ranked first in the conference in strikeouts, strikeouts per game (10.29), opposing batting average (.144) and ERA, and was second in wins. Her top individual performances were a 13-strikeout, complete game, 4-0 win over Wentworth (the 13 strikeouts tied for fifth all-time in a single game), and a 10-strikeout, complete game, 13-0 masterpiece over Wentworth.

Endicott won the CCC with a conference record of 11-1 and an overall mark of 19-2. They were awaiting details on their imminent participation in the 2021 NCAA Division III softball Championship Tournament as of May 17, having punched their ticket by winning the Commonwealth Coast Conference tournament.

Maria Hanchuk’s long-delayed, first year excellent performance in college softball was merely a continuation of her outstanding high school achievements. In 2019 she was Connecticut’s Gatorade Player of the Year, High School Coaches Association Pitcher of the Year, Hartford Courant Player of the Year and four-time All-Conference selection.

There is little doubt this young lady is destined to win more accolades and set additional milestones as she plays out the remaining three years of her collegiate eligibility. She will keep on perfecting her pitching prowess, striving to be a key contributor to her Endicott squad, ever dominant on the mound.