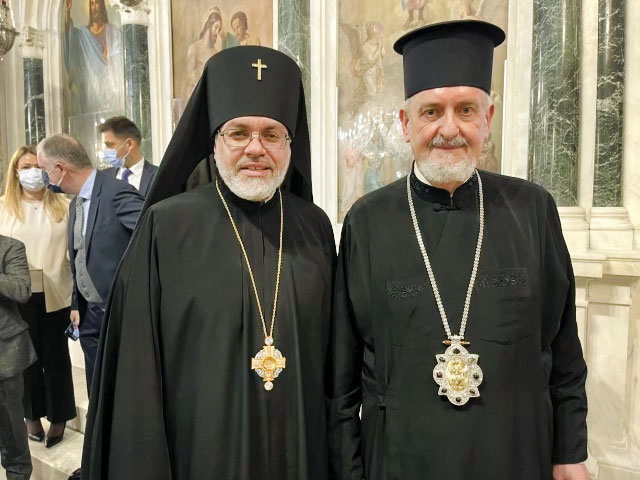 Archbishop Daniel of the Ukrainian Orthodox Church of the U.S.A. (left) celebrates the enthronement of Metropolitan Emmanuel as Elder of the Metropolis of Chalcedon.

Metropolitan Emmanuel, who previously served as bishop of France, was instrumental in assisting the OCU being granted the Tomos of Autocephaly by the Ecumenical Patriarchate of Constantinople in 2019.

Metropolitan Emmanuel, in his remarks that were delivered in Greek, English, Arabic and French, stated: “my election and enthronement at the recommendation of His All Holiness [Ecumenical Patriarch Bartholomew], to the historic Elder Metropolis of Chalcedon by the Holy and Sacred Synod, is a supreme honor for me. I feel a great responsibility, and I will answer this new call of the Church in the fear of God. In the Church, we learn to always be obedient. As the Apostle Paul says, ‘obey your leaders and submit to them’ (Hebrews 13:17) … I ask for the prayers of all of you, so that I may be shown worthy of the expectations of our Patriarch, and that I may be well-pleasing to both God and man.”

Patriarch Bartholomew, in his address following the enthronement, noted that he also was named Elder of the Metropolis of Chalcedon more than 30 years ago. He also said that the Fourth Ecumenical Council of 451 was held in Chalcedon, which formalized the “doctrine of Chalcedon,” that specified the dual natures of Jesus Christ, both fully divine and fully human, and organizational structures of the Church that included the hierarchy of jurisdictions to include Rome and Constantinople as both equal in honor, followed by Alexandria, Antioch and Jerusalem. All the bishops in each city received the title of patriarch, and so those jurisdictions are called patriarchates.

Patriarch Bartholomew added: “Our humble ministry of the past 30 years on the Patriarchal Throne of Constantinople has taught us, among other things, that in critical circumstances for society and the Church, what matters is not what we say or do, but who we are.” 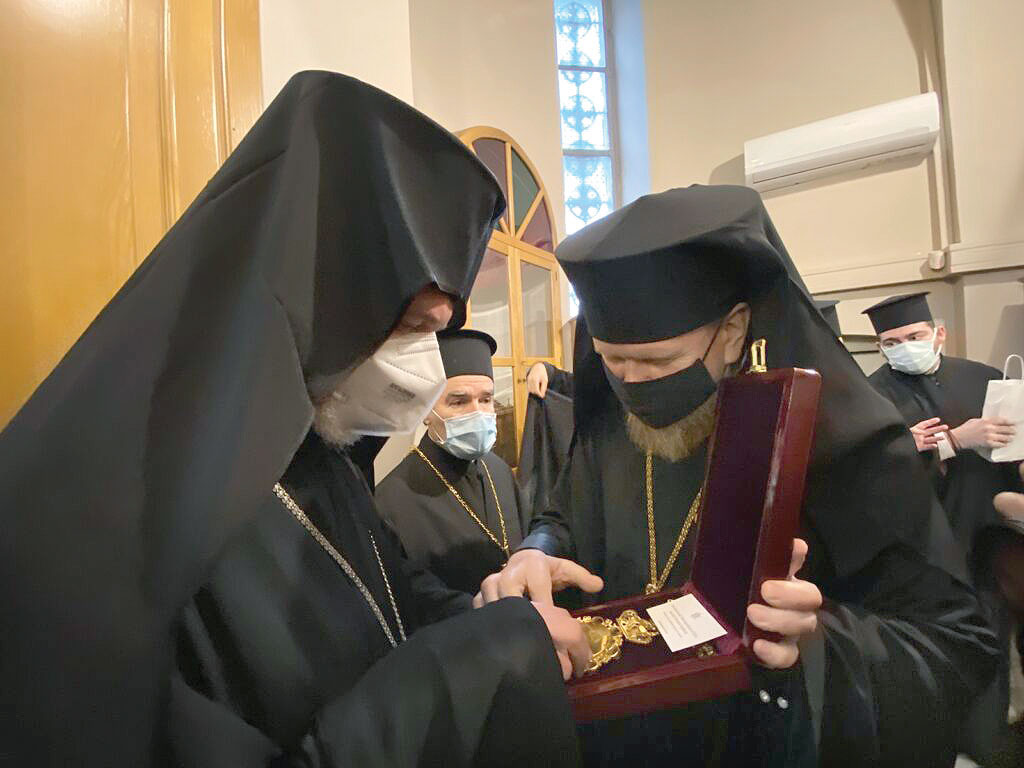 Archbishop Yevstratiy of the Orthodox Church of Ukraine (left) presents a panagia, or bishop’s medallion, to Metropolitan Emmanuel following his enthronement as Elder of the Metropolis of Chalcedon.

The enthronement of Metropolitan Emmanuel as Elder (Geron) of the Metropolis of Chalcedon is of particular importance for the Orthodox faith, as Chalcedon is viewed as the second city after Constantinople in the Patriarchate of Constantinople. His background includes years of education, administrative skills and experience in various roles and positions, including as representative of the Ecumenical Patriarchate, and as a representative of the Orthodox Church in the European Union, having opened a two-way academic dialogue between Islam and Judaism. He serves as chairman of the board of the KAICIID Interfaith Foundation in Vienna, Austria; coordinator of the International Religions for Peace Organization; and has been president of the Council of European Churches.

In recognition of his work, in 2010 he was named Knight of the Legion of Honor and in 2011 he was named Commander-in-Chief of the Order of Honor in Greece.
Other Orthodox hierarchs from the United States who participated in the enthronement included Archbishop Elpidophoros and Metropolitan Alexios (Greek Orthodox Archdiocese of America).