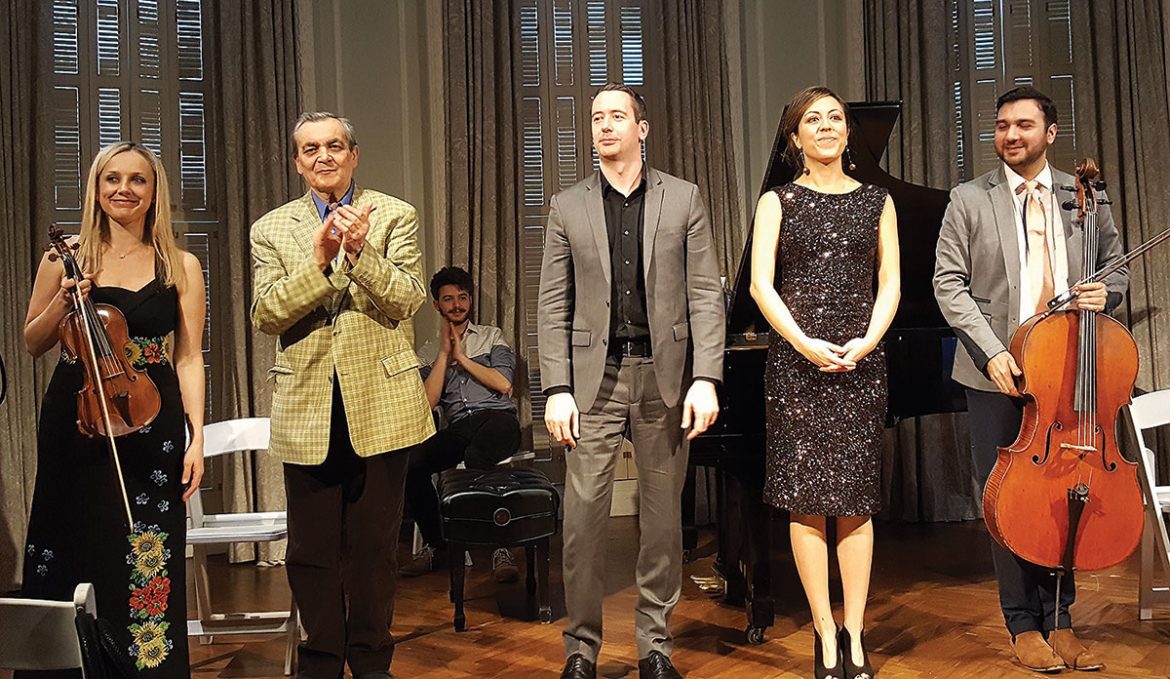 NEW YORK – Ukrainian composer Yevhen Stankovych is particularly fond of this startling Nostradamus prophesy: “A new, more pleasing language and culture will emerge in the land where the river Borysthenes (Dnipro) flows…” The venerable composer, teacher and ambassador of Ukrainian music has survived upheavals of the Soviet era, independence, and now the Russian invasions. He faces each day with faith in a better future.

The Ukrainian Institute of America’s March 19 “Meet the Composer” concert dedicated to Mr. Stankovych was important because it not only presented a cross-section of his seminal compositions, but also, as expressed by Solomiya Ivakhiv, artistic director of Music at the Institute (MATI) concert series, because it honored a man renowned for his humane concern and support for musical organizations and many individual artists throughout his native Ukraine.

A central figure of contemporary Ukrainian music, Maestro Stankovych was born in 1942 in the city of Svaliava in Zakarpattia Oblast. An outspoken proponent for the individuality of every composer, Mr. Stankovych always insisted that his students at the Kyiv Conservatory learn from all the masters – Baroque, Romantic, modern. (His beloved composer is Johann Sebastian Bach, whose works no doubt influenced some of his own elaborate polyphonic textures.)

At the same time he is passionate about Ukrainian folk songs. Conversing with this author, Mr. Stankovych shared his enthusiasm for pre-Christian folk songs of central Ukraine in particular. These ancient songs are unique among the world’s cultures; there is absolutely nothing else like them anywhere. In 1976, his studies led him to compose a folk opera “The Flower of the Fern,” comprising many of these melodies.

His compositions include six symphonies, six ballets, oratorios, instrumental concertos, chamber works and music for over 100 films They have been performed by major orchestras and ensembles throughout the world, and many are recorded on Melodiya, Analecta, ASV and Naxos labels.

Mr. Stankovych is a gentle, unassuming man with a wry wit. With eyes closed in concentration, he attentively followed each performance at the concert in his honor.

By contrasting works from two periods in his creative life (early post-student years and the most recent decade), the concert at the UIA also threw a fascinating light on much of the social and artistic turmoil of those times. The performances were preceded by an extended question-and-answer period, during which Mr. Stankovych and fellow avant-garde composer Leonid Hrabovsky shared many of their experiences and insights with listeners.

The oldest composition on the program was the 1968 Sonata No. 2 for Cello and Piano, completed two years before the composer’s graduation from the Kyiv Conservatory. (Earlier, Mr. Stankovych spoke gratefully of the influence of his composition teachers, Stanyslav Liudkevych and Myroslav Skoryk, and especially of Borys Liatoshynsky, whom he calls “an exponent of the highest professionalism” and “one of the greatest talents.” The cello happens to be an instrument Mr. Stankovych studied for a long time; however, an opportunity lost was his delay of 45 years before composing his second cello concerto, especially after the encouragement of world artist Mstislav Rostropovich, whom he met in Ukraine in 1970.) 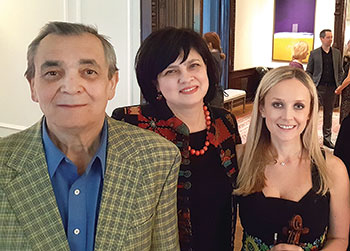 Yevhen Stankovych, his daughter Rada Stankovych (center) and Solomiya Ivakhiv at the Ukrainian Institute of America.

Performed with appropriate intensity and flair by cellist Yves Dharamraj and pianist Philip Edward Fisher, this sonata today strikes the listener as hardly more than a collage of avant-garde mannerisms and experimentation with sporadic “effects” like tuning down the cello and the accompanist plucking strings inside the piano.

Two other pieces, both from 1972, were pretty much in the same vein. Violinist Ms. Ivakhiv and pianist Tanya Bannister navigated the challenges of the triptych “On the Highland.” Here, the composer’s favorite device of dramatic contrast was distributed over three movements: “Lullaby,” “Wedding” and “Improvisation.”

Finally, Two Pieces for Violin and Cello were given a dramatic reading by Ms. Ivakhiv and Mr. Dharamraj. But once again, despite some surface excitement, structural elements like the motor-driven slashing chords at the outset ultimately seemed more like isolated gestures rather than germs for rigorous development.

Mr. Stankovych’s creative growth and evolution encountered various difficulties under the Soviets. During the pre-concert talk, Messrs. Stankovych and Hrabovsky described how at that time Ukraine was pretty much isolated from contemporary musical life. However, there did exist a window to Europe – through Poland (particularly concerts of the eminent composer Witold Lutoslawski). Out of favor with the Soviet regime for their “modernisms,” many Ukrainian composers attended these performances and brought back new scores to study.

The complicated life of a composer is never easy, and more so in uncertain times. Even so, all was not bleak. The Ukrainian state-run “spilky,” or music unions, did provide support – a network of ensembles to perform new works, a national publishing house and material aid, including living accommodations. Ironically, this left a post-Soviet residue, where according to Ms. Ivakhiv, many of today’s musical organizations and performers now find it difficult to adjust to the lack of a safety net amidst their new “freedoms” and the necessity to build careers by the rules of the marketplace. 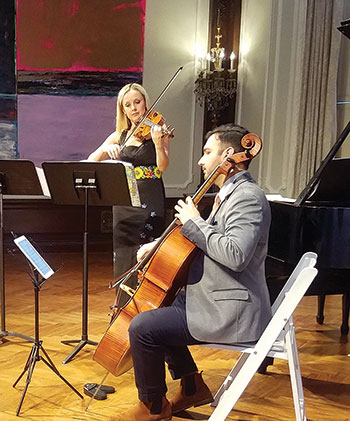 Performing during the concert are Solomiya Ivakhiv and Yves Dharamraj.

The Q&A discussion also touched on the need for difficult legal reform in Ukraine, in order to encourage artistic donations by providing tax benefits like in other countries. The openness of audiences to new music in Ukraine and elsewhere was debated, as well as Mr. Hrabovsky’s stimulating comments about the role of technical media in compartmentalizing music into dozens of sub-genres like rap, country, heavy metal, etc. Listeners accustomed to the quick “sound-bites” of our digital age consequently have shorter attention spans not conducive to following classical music. And sadly, the humanitarian element is disappearing from schools. Mr. Hrabovsky predicted that, if this trend continues, there will soon be no audiences left.

The remaining compositions at the UIA concert proved far more substantial; indeed, they whet the appetite to hear more of Mr. Stankovych’s varied output, especially his larger symphonic works. A more direct, personal lyricism and a new richness in the composer’s tonal palette now made themselves heard in these mature works in which he fully spread his wings.

The 2011 Quasi Sonata No. 2 for Flute and Piano, “Dancing on Flowers. Thumbelina,” is an amiable, good-natured piece that exploits and showcases the flute. Opening with a playful duet for both instruments, “Dancing on Flowers” contrasts bravura roulades with lyrical melodies over subtle harmonic transitions in the piano’s ostinato figures. Flautist Nora Lee Garcia tossed off the virtuosic challenges with full, vibrant tone and was expertly partnered by Mr. Fisher in the complex piano part. Judging by numerous individual postings on YouTube, “Dancing on Flowers” must certainly be a lot of fun to perform.

(It is gratifying to realize that Mr. Stankovych’s music is now reaching a wider circle of performers thanks to the efforts of Lauren Keiser Music publishing. Earlier, company president Matthew Keiser enthusiastically spoke about his hopes to advance the music of Mr. Stankovych and other fine Ukrainian composers. He said the biggest problem is piracy on Google, Facebook and other media sites.)

“Epilogues” (2007) for piano trio introduced lush and boldly Romantic colors, with lyrical harmonic progressions and textures reminiscent of Alban Berg and even Maurice Ravel. Stylishly played by Ms. Ivakhiv, Mr. Dharamraj and Ms. Bannister, this new soundscape was a revelation following the other pieces. It was like entering a different world – but a world filled with unexpected mellifluous moments.

With Mr. Fisher at the piano, the violinist played “Maidan Fresco,” composed in 2014 and inspired by the composer’s immediate impressions of the violent events and emotions of the Maidan revolution in Kyiv. The explosiveness of what occurred is mirrored by the unrelenting anguished chords at the outset. “Maidan Fresco” undergoes various swings in mood and textures until it evaporates to a distant quote of the first bars of the Ukrainian national anthem in the right hand of the piano under floating violin harmonics.

Ms. Ivakhiv possesses a lovely centered tone that is always at the service of the music. One is aware of her focus on not only the dramatic elements, but also her responsiveness to shifting harmonies and textures.

One of the highlights of the program was “Angel’s Touch” for violin and piano. This was commissioned by the UIA in 2013 and Ms. Ivakhiv was its first performer. It is essentially a succession of variations on the lyrical opening theme. Sensitively partnered by Ms. Bannister, Ms. Ivakhiv’s variety of expression brought this meditative rhapsody to life. Some of the most tender moments were when the violin spun its silver thread over undulating figures in the accompaniment.

The contribution of both of the excellent pianists, Ms. Bannister and Mr. Fisher, deserves special praise for their combination of precision, bravura and expressiveness.