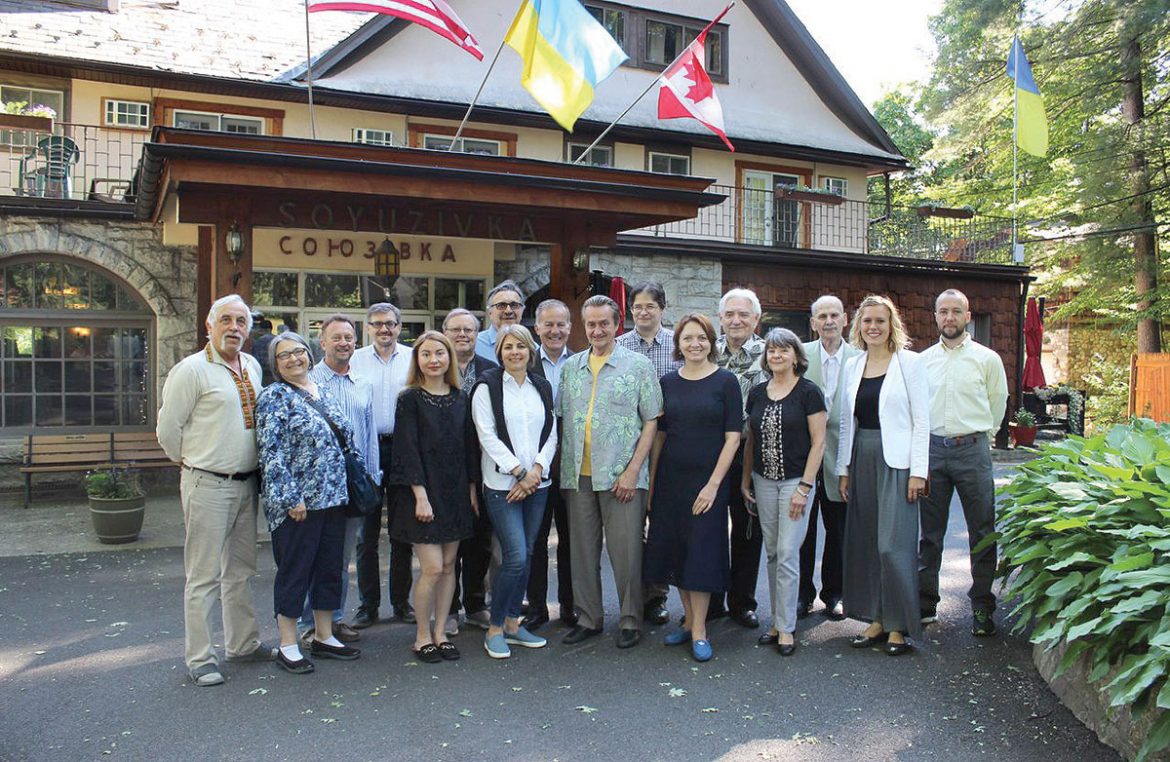 Participants of the fourth conference of Ukrainian Journalists of North America at Soyuzivka Heritage Center.

KERHONKSON, N.Y. – Ukrainian Journalists of North America gathered at their fourth conference here at Soyuzivka Heritage Center on June 15-17 to focus on a theme driven by today’s headlines: “How to Fight Fake News.”

Topics discussed included Russian disinformation, political assassinations and Moscow’s behind-the-scenes machinations, as well as the status of Ukraine’s news media and the state of the Ukrainian language.

The weekend conference began with an informal get-together on Friday evening, during which journalists and friends had an opportunity to renew contacts and meet new colleagues, and an introductory session the next morning. Participants were welcomed by both the president and the immediate past president of the association, respectively, Mr. Klufas and Ms. Hadzewycz.

The formal sessions of the conference got under way with a presentation on Ukrainian media today by Myroslava Gongadze, chief of the Ukrainian Service at Voice of America. She described the media landscape in Ukraine as including many new media sources but, unfortunately, not independent since many outlets are owned by businesspersons, political parties or oligarchs.

“This cacophony of media sources,” she said, results in “news” given out of context, coverage of scandals and a dependence on Russian sources for foreign news since many journalists don’t know the English language. “The poor quality of information presented by the news media results in the type of politics Ukraine has,” Ms. Gongadze pointed out.

Mr. Levytsky, former editor and publisher of the Edmonton-based Ukrainian News and now western bureau chief and national affairs editor for New Pathway – Ukrainian News, then spoke about Russian disinformation, providing examples of such in Canada and citing specific Russian agents active in the Canadian media. He suggested to fellow journalists: “We should coordinate how best to fight such disinformation.”

Special guest Serhii Plokhii, director of the Harvard Ukrainian Research Institute and author of “The Man with the Poison Gun,” tackled the topic of Russian political assassinations then and now. He spoke of the killings of Lev Rebet and Stepan Bandera in the late 1950s, and compared those acts to recent assassinations in terms of decision-making, motivation and purpose. Then and now, the killing is not the main goal, Prof. Plokhii said.  Assassination is used for a purpose: to manipulate, to create rifts, to spread disinformation. According to the scholar, political assassinations continue today and will continue into the future since decision-making has been decentralized and money (not ideology) is the motivating factor.

During lunch, Gregg Truman, North American vice-president of Ukraine International Airlines (UIA), presented the topic of cultural tourism to Ukraine. He encouraged his audience to travel to Ukraine on UIA – which has been flying for over 25 years – reminding them that when they do so they are supporting the Ukrainian economy. UIA was recognized during the conference as a sponsor of the UJNA representative’s attendance at the recent Lviv Media Forum.

Next, Marta Sydoryak gave a presentation about the Ukrainian Leadership Academy (ULA), a recently established educational program that strives to form a new generation of Western-minded leaders for Ukraine. The 10-month program is geared to students age 16-20 and encompasses 30 disciplines. She compared the vibe at the academy to that of a Plast camp, but described it as “more intense, more focused.”

The ULA now exists in five cities: Kyiv, Lviv, Poltava, Mykolayiv and Kharkiv, but the goal is to have an academy in each of Ukraine’s 24 oblasts and eventually in 100 cities. The program, which Ms. Sydoryak called “an investment in Ukraine’s bright young people,” is now completing its third year of work with some 200 students currently enrolled.

Two related topics of the day were “Moscow Behind the Scenes Everywhere” and “Disinformation: Where Are We Headed?”

Daria Dieguts, a contractor for Voice of America, observed that Moscow today does things more in the open, for example via media outlets like RT (formerly known as Russia Today), while at the same time disseminating fake news – “a challenge to us all” – via Facebook groups. What is most important to realize, she said, is that “Russia takes advantage of tensions between countries and among people.”

Mr. Bociurkiw, an independent journalist and global affairs analyst, followed up by stating: “In terms of fake news, I think it will still get a lot worse and people will still believe fake news.” He explained that this is due to the fact that people are “retreating into echo chambers” that reflect the views they hold and often merely click on headlines online without reading the stories.

The discussion among the group then evolved into a sharing of perspectives on the recent case of Arkady Babchenko, a Russian journalist in Ukraine whose murder was faked by the Security Service of Ukraine as part of a plan to catch a would-be assassin. The ruse was questioned by the Committee to Protect Journalists, among others, which raised questions about the ethics and the impact of such an operation on public trust in the news media.

That evening during dinner, conference participants had the opportunity to view a recently released documentary on the Euro-Maidan revolution, “Breaking Point: The War for Democracy in Ukraine,” directed by Mark Jonathan Harris (U.S.) and Oles Sanin (Ukraine). It was presented by producer Mr. Borisow, who explained the goals of the filmmakers in producing this Western-style documentary made for the American market. The film looks at the Revolution of Dignity and Russia’s war on Ukraine through the eyes of several principal characters whose lives were transformed by these historic events.

Sunday’s session was devoted to brainstorming, plans for the future and election of UJNA officers.

The fifth conference of Ukrainian Journalists of North America has been scheduled for May 17-19, 2019 (the weekend of Canada’s Victoria Day), at Soyuzivka.