Participants of the fifth conference of Ukrainian Journalists of North America at Soyuzivka Heritage Center.

KERHONKSON, N.Y. – Ukrainian Journalists of North America gathered at Soyuzivka Heritage Center on Friday through Sunday, May 17-19, for their fifth conference, whose theme was “The Future of News.” Among the media outlets represented were New Pathway – Ukrainian News, Kontakt Ukrainian TV Network, Svoboda and The Ukrainian Weekly; also in attendance were independent journalists and media professionals from across the U.S. and Canada.

Those who arrived Friday evening had a chance to meet with colleagues at an informal get-together before the conference sessions got under way the next morning.

Opening remarks were delivered on Saturday morning by the immediate past president of the UJNA, Roma Hadzewycz, editor-in-chief of The Ukrainian Weekly and Svoboda, who set the stage for the weekend’s sessions by recalling the major topics of the previous four conferences and noting that the current year’s topic alludes to “a future that is uncertain as the journalism field faces many challenges.”

Among those challenges are: fake news, misinformation and outright disinformation; social media that have become de facto news sources for the public; and rampant partisanship and bias in much of the media, which leads consumers to question what is true.

“Today everyone’s a journalist,” she noted, adding that “the type of journalism we studied seems to no longer be important.” Meanwhile, traditional print and broadcast media are in decline, newspapers are merging, media conglomerates are acquiring ever more outlets, and newspapers and magazines are becoming online only publications. “So, what does the future hold for Ukrainian community news media? Perhaps we’ll find some answers during our discussions over these two days,” Ms. Hadzewycz said.

Jurij Klufas, president of the UJNA, then introduced the first speaker of the conference, Josef Zissels, co-president of the Association of Jewish Organizations and Communities of Ukraine, a human rights activist and former member of the Popular Movement of Ukraine (Rukh) and its Council of Nationalities. Participating via Skype from Toronto, Mr. Zissels offered his perspective on journalism in Ukraine, which he said, “has a way to go to reach the standards of the ‘civilized’ world.”

He also commented on the “uncertainty” surrounding the newly elected president of Ukraine, Volodymyr Zelenskyy: “We don’t know who he is based on his political position, because he has none.” Mr. Zissels went on to explain who voted for the untested candidate: those who want change, Maidan supporters who did not understand what President Petro Poroshenko had indeed accomplished, people suffering economically, those who want peace, and people who are against the oligarchs. He said the 73 percent vote for Mr. Zelenskyy reflects the “infantilism of Ukrainian society, which awaits a miracle.”

Nonetheless, the speaker voiced his faith in civil society and said he believes Ukraine’s course toward Europe and NATO will continue. He also noted that he expects Russian President Vladimir Putin to apply pressure on the new president, adding, “we will see how this develops.”

A final topic broached by Mr. Zissels was anti-Semitism. He cited “the very low level of anti-Semitism in Ukraine” – lower than in the United States, Canada or the West in general – and pointed out that Ukraine is rid of the Soviet-era’s state-sponsored anti-Semitism. Speaking of the Jewish citizens of Ukraine, he said “their Jewishness is not an influence on their lives” and characterized them largely as “assimilated citizens of Ukraine.”

Another special guest at the UJNA conference was Melinda Haring, editor of the Atlantic Council’s most popular publication, the “Ukraine Alert” blog, a senior fellow at the Foreign Policy Research Institute and a term member of the Council on Foreign Relations. Ms. Haring offered “the view from Washington” about the current alignment of political forces in Ukraine and the future of the next Verkhovna Rada, which she predicted would be “fragmented, fragile and less reform-minded.” She noted that the presidential election was all about domestic issues, not foreign policy, which explains President Poroshenko’s poor showing. 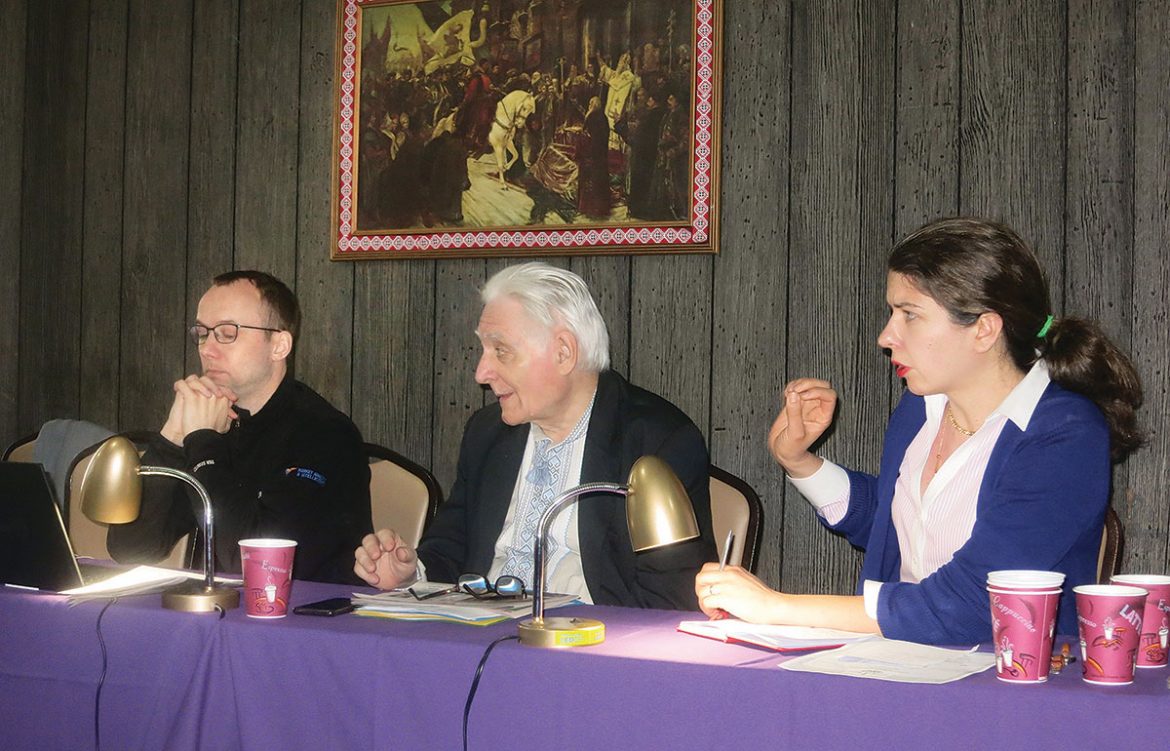 The prognosis for the next five years, she told the journalists, is “mixed, but now is not the time to give up.” Ukraine needs strong independent news media, as oligarchs now control television and opposition forces can’t get on the air. Another problem is that the public broadcaster in Ukraine is very poor. “The U.S. should put real money into Ukraine and Ukrainian TV to challenge the dominance of the oligarchs,” she observed.

Ms. Haring concluded her remarks by saying: “Ukraine has a story to tell, but it’s not telling that story” – its achievements in IT, fashion, agriculture and other realms of activity are decidedly underreported.

Marco Levytsky of the newspaper New Pathway – Ukrainian News, who is UJNA vice-president for western Canada, spoke about the history of Ukrainian newspapers in Canada, pointing out that the first Ukrainian newspaper in Canada was Svoboda – from the United States. In 1896, that newspaper carried a regular column called “News from Canada.”

Through the decades, newspapers in Canada experienced much growth and lately have declined, Mr. Levytsky said. The survivors are: New Pathway – Ukrainian News (the result of a merger of two newspapers that occurred in 2017), Homin Ukrainy (Ukrainian Echo), Meest and the Ukrainian Canadian Herald. The speaker also cited some online only Ukrainian publications in Canada, such as Ukrainian Vancouver. He explained that though there are 1.4 million Ukrainians in Canada, only 10 percent of them claim Ukrainian as their mother language.

Alik Homelsky joined the conference via Skype from Toronto to report on facts vs myths in the story of Symon Petliura. Mr. Homelsky, an independent researcher, is the author of a Ukrainian-language book about Petliura (1879-1926), the supreme commander of the army of the Ukrainian National Republic (UNR) and president of the Directory of the UNR. Petliura was assassinated in 1926 in Paris by Shalom Schwartzbard, who cited vengeance for Petliura’s purported responsibility for pogroms in Ukraine. In fact, Mr. Homelsky said, Petliura tried to stop the pogroms, called on the public not to succumb to provocations and cooperated with the Jewish community of Ukraine.

Mr. Homelsky also released a book called “History: Unlearned Lessons,” and his next project is a book about the Ukrainian nationalist leader Yaroslav Stetsko. He underscored in his talk that “understanding among nations must be found through the truth.” 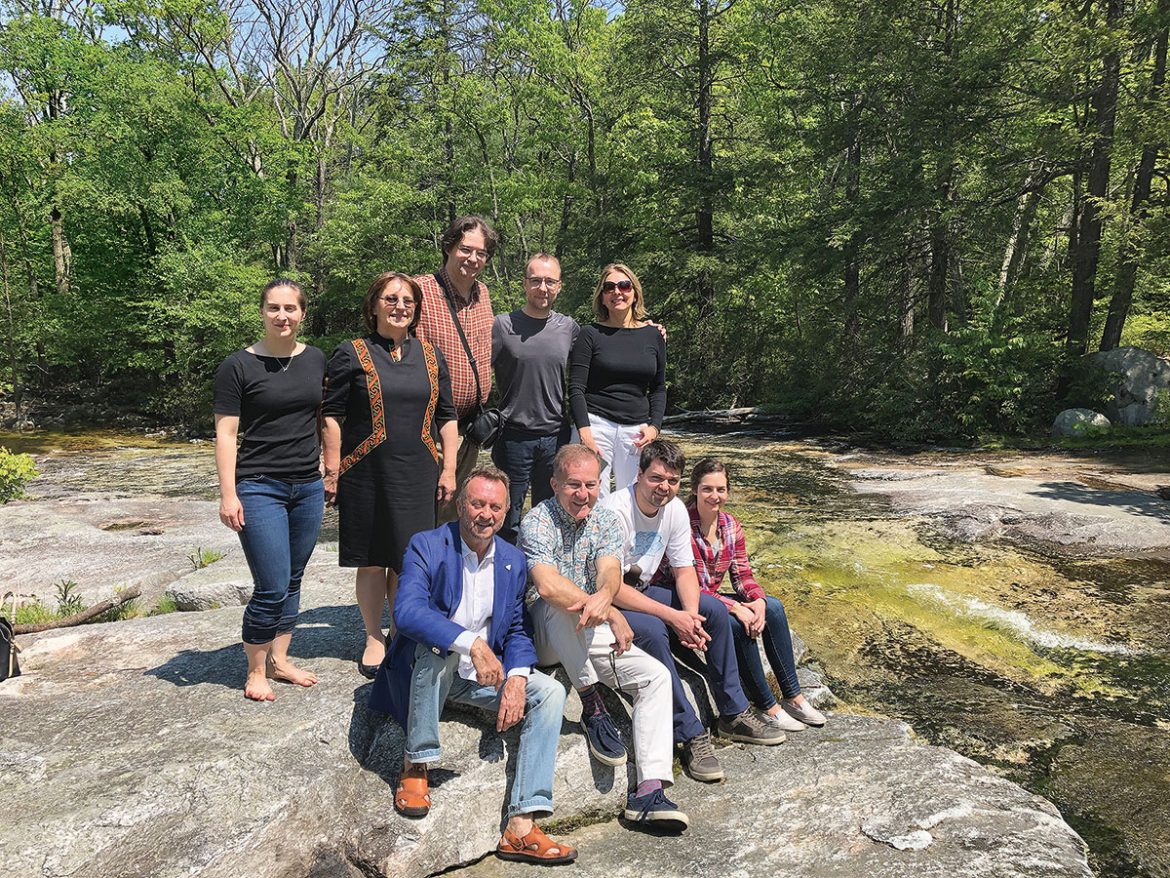 Journalists take a break from their sessions to enjoy Soyuzivka’s natural beauty.

A global affairs analyst and the UJNA’s vice-president for international relations, Michael Bociurkiw focused his remarks on Ukraine’s President Zelenskyy, whose election by such a huge margin was due to a protest vote. “The election was [Petro] Poroshenko’s to lose, but he was tone deaf,” the speaker noted. “He came across as angry, … and he did not deal with bread-and-butter issues.”

At the same time, Mr. Bociurkiw acknowledged that “a lot of people probably voted for the TV persona,” rather than for Mr. Zelenskyy himself. “Whether we like it or not, Ukraine elected Zelenskyy, and we have to give him a chance,” he added.

He spoke also about the influence of fake news and disinformation, pointing out the Russia spends $1.1 billion for such “information,” while the European Union spends only $5.67 million to counter it. He warned that we should expect an uptick of Russian misinformation before the elections of the Verkhovna Rada in Ukraine.

“Ukrainian Diaspora Newspapers: A Changing Business Model” was the topic tackled by Walter Kish, UJNA vice-president for eastern Canada. The challenges faced by Ukrainian newspapers in North America include aging readers and a declining readership; rising production and distribution costs; competition from Internet sources; and an uncertain business model.

He went on to speak of the experience of New Pathway of Toronto (founded in 1930) and Ukrainian News of Edmonton (1929), which merged in 2017 to become the largest broad-based newspaper in Canada, and provided information on the new publication’s expenses and income. He noted that the newspaper benefits from a government subsidy that helps cover costs.

Mr. Kish’s look at the benefits and drawbacks of going to an online-only publication was a good lead-in to the dinnertime presentation by Cassian Soltykevych, owner of the company Urban Block Media, which specializes in web design and marketing solutions.

Among the interesting statistics cited by Mr. Genyk-Berezowsky: 68 percent of Ukraine’s people consider Ukrainian their native language, yet only half speak it in their families; although Ukrainian is the language of instruction in schools, Russian is dominant beyond the classroom; 75.9 percent of books and brochures in Ukraine are now published in Ukrainian, but only 33 percent of newspapers. He also discussed the use of Ukrainian in the broadcast media, where he noted an increase in its prevalence, as well as on the Internet, where Ukrainian loses when it comes to news sites, games and commerce.

The speaker also gave a chronology of ultimately successful efforts to pass the new law on language in Ukraine, calling it a “a historic chance to restore justice” to a language that had been repressed and persecuted.

During dinner, Mr. Soltykevych spoke about digital technology options for Ukrainian media in the diaspora, covering such topics as the demographics of an outlet’s audience, both current and potential; the format of a publication online and how it is perceived by the general public; and the all-important topic of content, which does not have to be the same as the printed version of a publication.

Also important, he said, is the ease of subscribing to a publication. Things to consider include: Can a subscriber pay online? Is there a discount for longer-term subscriptions? Is there a price for combined print/online subscriptions? Can a reader auto-renew?

As far as social media are concerned, Mr. Soltykevych’s advice was simple and direct: “Either use it or delete it.”

During the concluding session of the conference on Sunday, there was a wide-ranging discussion on the UJNA’s plans for 2019-2020, including the possibility of sponsoring presentations in several cities in North America on the topic of human rights issues and the work of journalists in Ukraine’s territories occupied by Russia. Other topics broached were mentoring students of journalism, co-op training and workshops for journalists, as well as the UJNA’s use of social media.

The sixth conference of Ukrainian Journalists of North America has been scheduled for May 15-17, 2020 (the weekend of Canada’s Victoria Day), once again at Soyuzivka Heritage Center. 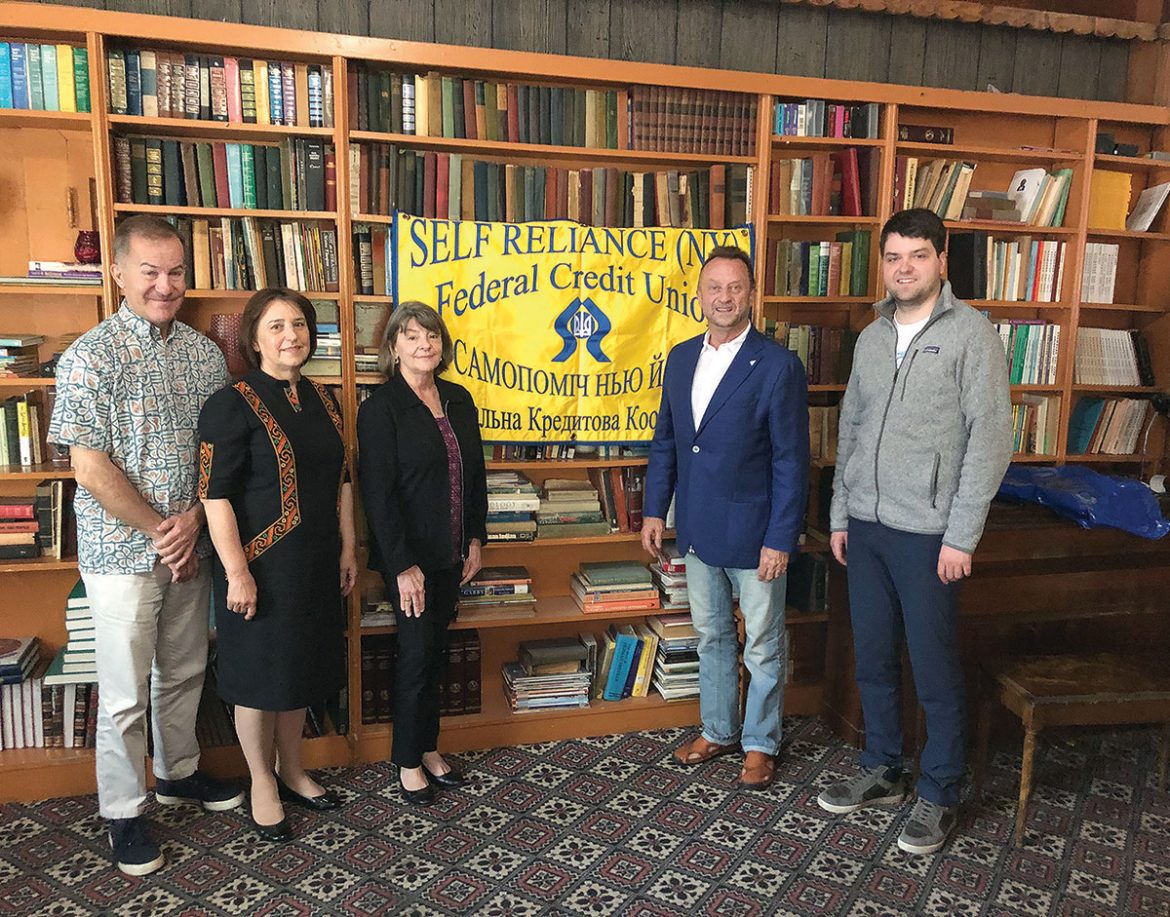