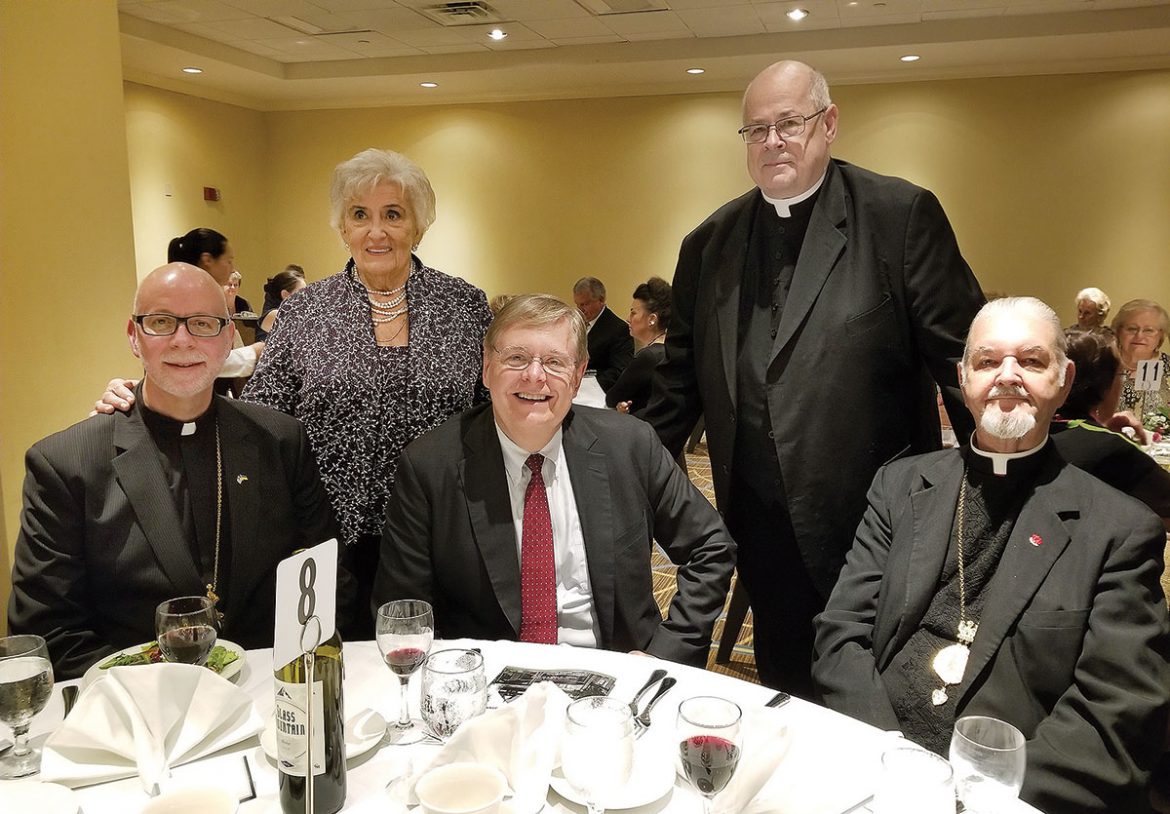 STAMFORD – More than 100 people from the tri-state area and beyond celebrated the 80th anniversary of the Ukrainian Museum and Library of Stamford, (Conn.), the oldest cultural institution of its kind in the United States. At a cocktail hour and festive banquet at the Stamford Sheraton Hotel on October 7, members, friends and donors gathered to pay tribute to the institution’s founders, acknowledge the achievements of past decades and look ahead to its future.

The celebrants heard a keynote address by Metropolitan Lawrence Huculak, OSBM, archbishop of Winnipeg and a talk by guest speaker Jurij Dobczansky of the Library of Congress. A special guest – David Martin, the mayor of Stamford, made an appearance and also offered remarks.

Performing in a musical interlude during the banquet was violinist Innesa Tymochko-Dekajlo. Mistress of ceremonies for the event was Sonya Hlutkowsky Soutus, a public relations executive. 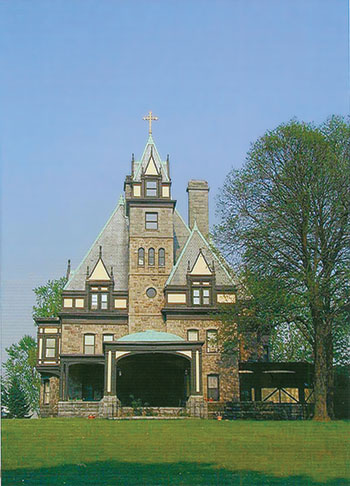 Ukrainian Museum and Library of Stamford

The museum building of the Ukrainian Museum and Library of Stamford, Conn.

The Ukrainian Museum and Library of Stamford was founded by Bishop Constantine Bohachevsky, the metropolitan of the Ukrainian Catholic Church in the U.S., and officially opened in September 1937. Its founder envisioned it not only as a repository of both religious and secular art, but as an important cultural resource and vehicle for the preservation of Ukrainian identity and the Ukrainian community in the U.S.

Today the museum and library continues to fulfill this mission as a non-profit organization registered in the state of Connecticut.

Nearby, the large, well-regarded library housed in the former St. Basil’s Prep School at 39 Clovelly Road, holds over 70,000 volumes, as well as extensive archives, including a collection of rare maps.

With its rotating exhibitions and special cultural events, the institution continues to preserve Ukrainian community cohesion while sharing Ukrainian culture with the wider community in Stamford and beyond.

The 80th anniversary celebration began with a cocktail hour at which museum and library members mingled with friends old and new. Opening the banquet that followed, Msgr. John Terlecky offered a welcome and introduced the mistress of ceremonies Ms. Soutus, who invited Metropolitan Lawrence Huculak to offer the invocation.

The keynote address was then delivered by Metropolitan Lawrence. Having once served as eparchial bishop of Edmonton, Alberta, whose eparchy is home to the Ukrainian Museum set up in 1953 by the Basilian Order in Mundare, Alberta, he is keenly aware of the role played by such institutions in the preservation of Ukrainian heritage in North America and, in particular, he said, “the close relationship between faith and culture.”

He identified the challenges to museums today as both theoretical and practical: “in a secular world, to protect the spiritual value of items which help us in our life journey” and “to educate clergy to recognize the value of historic preservation.” On the practical side, “the challenge is the expensive financial upkeep of museums and the training of personnel, including volunteers.” 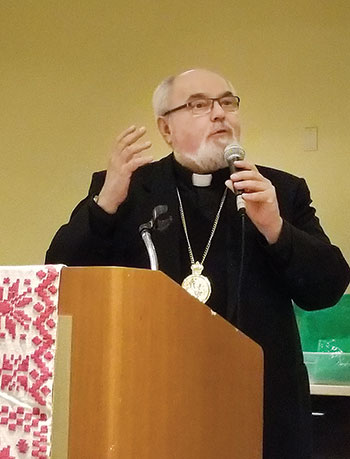 Addressing library issues was Mr. Dobczansky, senior cataloguing specialist of the Germanic and Slavic Division at the Library of Congress in Washington and chair of the Library and Archives Commission of the Shevchenko Scientific Society in the U.S. The speaker zeroed in on the key role of cataloguing or RDA – resource description and access – which he described as “the art of providing access to a collection.”

He noted that librarians on the national level cooperate on projects such as First Search and World Catalog, which are both run by the Online Computer Library Center (OCLC). He cited the Ukrainian Library of Stamford, with kudos to Msgr. Terlecky and Lubow Wolynetz, as being the only Ukrainian library outside of a major university library to regularly contribute to the above two cooperative cataloguing projects.

Making a special appearance at the Ukrainian Museum and Library’s anniversary banquet was Mayor Martin of Stamford. He praised the institution for contributing to the cultural landscape of Stamford and declared “You don’t just add to the Stamford community – you are what makes Stamford what it is!” He then announced that to celebrate the institution’s 80th anniversary, he had issued a proclamation declaring October 7, 2017, as “Ukrainian Museum and Library of Stamford Day.”

During the banquet, guests were treated to a musical interlude by a talented recording and performing artist, violinist Innesa Tymochko-Dekajlo, who received her MFA in violin performance and orchestral conducting from the Lviv Conservatory.

The final speaker of the evening was Bishop Paul Chomnycky, OSBM, eparch of Stamford, who made closing remarks and expressed a thought that everyone in this audience shared: “Museums are not something frivolous. If we want to know where we’re going into the future, we have to know where we came from – our past.” His enthusiasm for initiatives related to the Ukrainian Museum and Library’s development is consistent and contagious.

Bishop Emeritus Basil Losten closed the 80th anniversary evening with a benediction. For those who know the incalculable contribution he has made to the museum and library over the years, there could not be a more fitting and emotional conclusion. As the program notes indicate, “Bishop Losten has been instrumental in revitalizing the museum and library… undertaking and supporting a myriad of initiatives related to its continued development, growth, expansion and maintenance.”

The evening ended with an enthusiastic audience singing “Mnohaya Lita!” (Many Years) to Ms. Wolynetz, curator of the museum since 2000 and Msgr. Terlecky, director of the library/cultural research center since 1997. Without their professionalism and commitment, the Ukrainian Museum and Library of Stamford would not be what it is today.

Attending the event were representatives of several institutions that have offered generous support to the Ukrainian Museum and Library over the years. They were: Bohdan Kurczak and Stefan Kaczaraj of Self Reliance New York Federal Credit Union, Walter Kozicky of the SUMA (Yonkers) Federal Credit Union, officers and staff of SUMA, Donald and Gloria Horbaty of the Connecticut State Ukrainian Day Committee, and bishops and clergy of the Eparchy of Stamford. A complete list of donors was included in the program book. 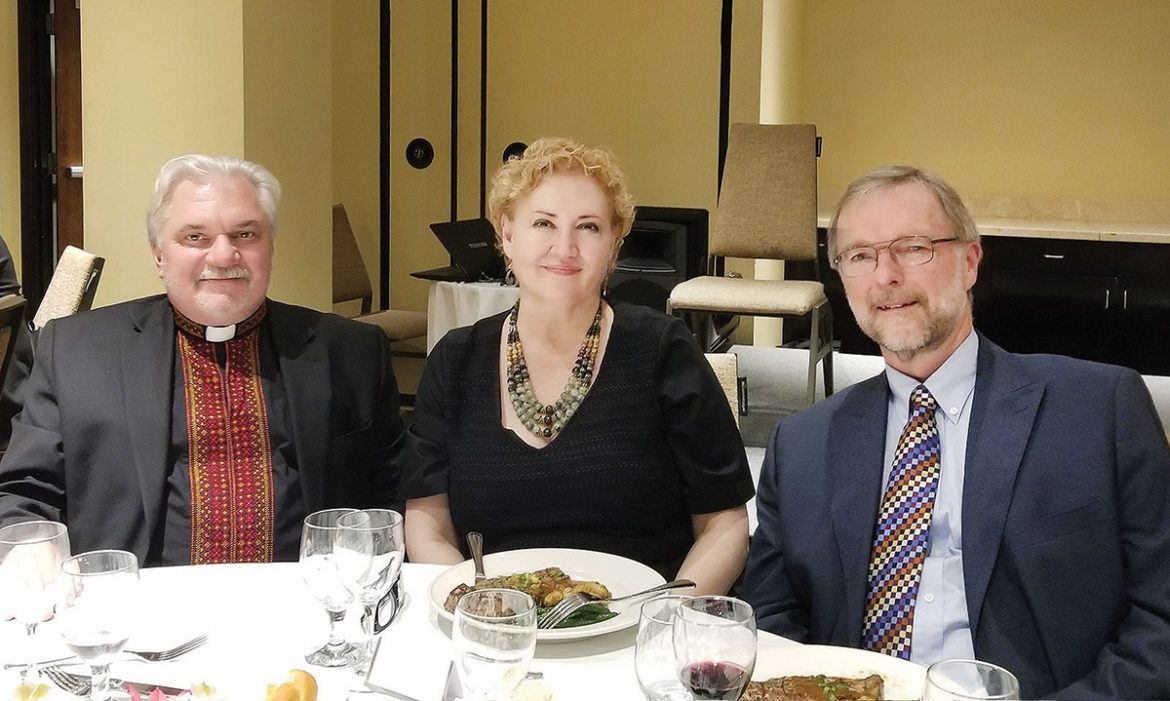 Guest speaker Jurij Dobczansky (right) with the Rev. Anibal Soutus and Sonya Hlutkowsky Soutus, who served as the mistress of ceremonies.

There were greetings from the Consulate General of Ukraine in New York, Self Reliance New York, the Ukrainian Congress Committee of America and the United Ukrainian American Relief Committee. The Providence Association of Ukrainian Catholics was represented by Kvitka Semanyshyn. The Ukrainian Museum of New York was represented by its director Maria Shust and its president Chryzanta Hentisz. Also present was Lubomyr Hajda of the Harvard Ukrainian Research Institute.

The above organizations and individuals were acknowleged during the evening, as were the members of the museum and library’s board of directors.

Donations in honor of the 80th anniversary are welcome. To donate or to become a member, contact ukrmulrec@optonline.net;  Ukrainian Museum and Library of Stamford, 161 Glenbrook Road, Stamford, CT 06902; 203-323-8866; www.ukrainianmuseumlibrary.org.