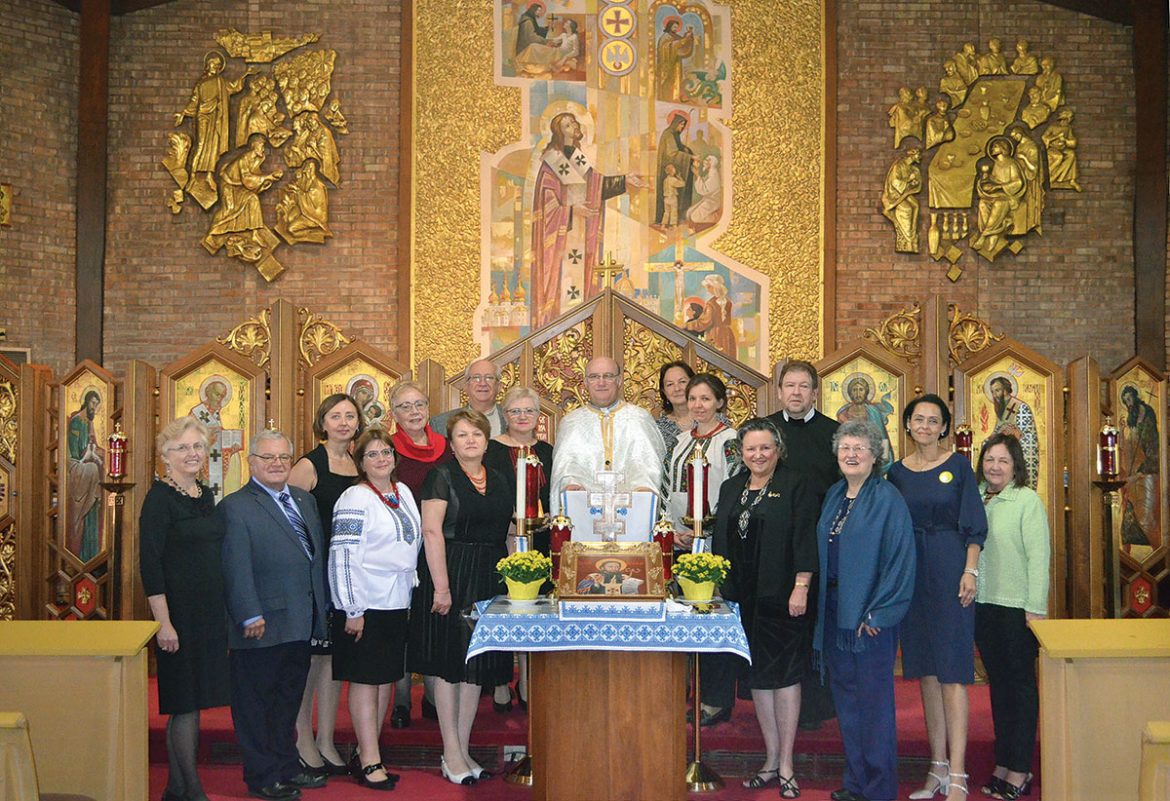 Participants of the Ukrainian Music Institute convention at St. Josaphat Ukrainian Catholic Church with the pastor, the Rev. Mario Dacechen (center) and the Rev. Walter Rybicky.

DETROIT – Faculty members of the Ukrainian Music Institute (UMI) convened for the organization’s annual meeting on September 22-23 in the Detroit area, home to one of the oldest and largest branches of UMI.

A meeting of the UMI board of directors took place on September 22 in the premises of the Ukrainian National Women’s League of America, Detroit Regional Council. UMI President Maria Lonchyna-Lisowsky lit a memorial candle and read a prayer authored by Bishop Hlib Lonchyna of the Ukrainian Catholic Church in Great Britain and Ireland, who is a piano diploma graduate of UMI. His late father, Dr. Bohdan Lonchyna, professor at the University of Detroit, was a long-time director of the Detroit branch of UMI.

This prayer honored the memory of UMI’s founding teachers, thanks to whose vision and labors the 66-year-old institute has become an established non-profit (503-c-3) professional musical organization with a proud tradition built on its earlier sister organization, the Ukrainian Music Institute in Lviv.

Iryna Svytka, Detroit’s UMI director, greeted all present. The board of directors discussed various current issues of music education and community cultural development programs. The first day of the gathering featured discussions on a variety of professional, business and corporate development topics, as well as long-term planning.

The following day, the teachers attended divine liturgy at St. Josaphat Ukrainian Catholic Church, where the pastor, the Rev. Mario Dacechyn, OSBM, greeted the UMI delegation and offered a prayer for God’s inspiration, further creative guidance and success for these dedicated music educators and their students. Singing the liturgy was the church choir directed by Volodymyr Shesiuk, long-time musical director and conductor of the Livonia Symphony Orchestra and a faculty member in UMI’s Detroit branch of UMI.

Discussions on matters of by-laws, organization and pedagogy followed the elections.

Andrij V.R. Szul, an attorney who holds a Ph.D. in musicology and is a longtime member of UMI and the Shevchenko Scientific Society, made a presentation about the recently published Volume 3 of the Encyclopedia of the Ukrainian Diaspora, whose publication was begun 23 years ago by the Shevchenko Scientific Society. The final volume (No. 4) is scheduled to appear in late 2019. Dr. Szul highlighted the significance of this unique publication, including its thousands of articles in the form of encyclopedic entries, including subjects such as UMI, the development of Ukrainian sacred music in the U.S. (authored by him). 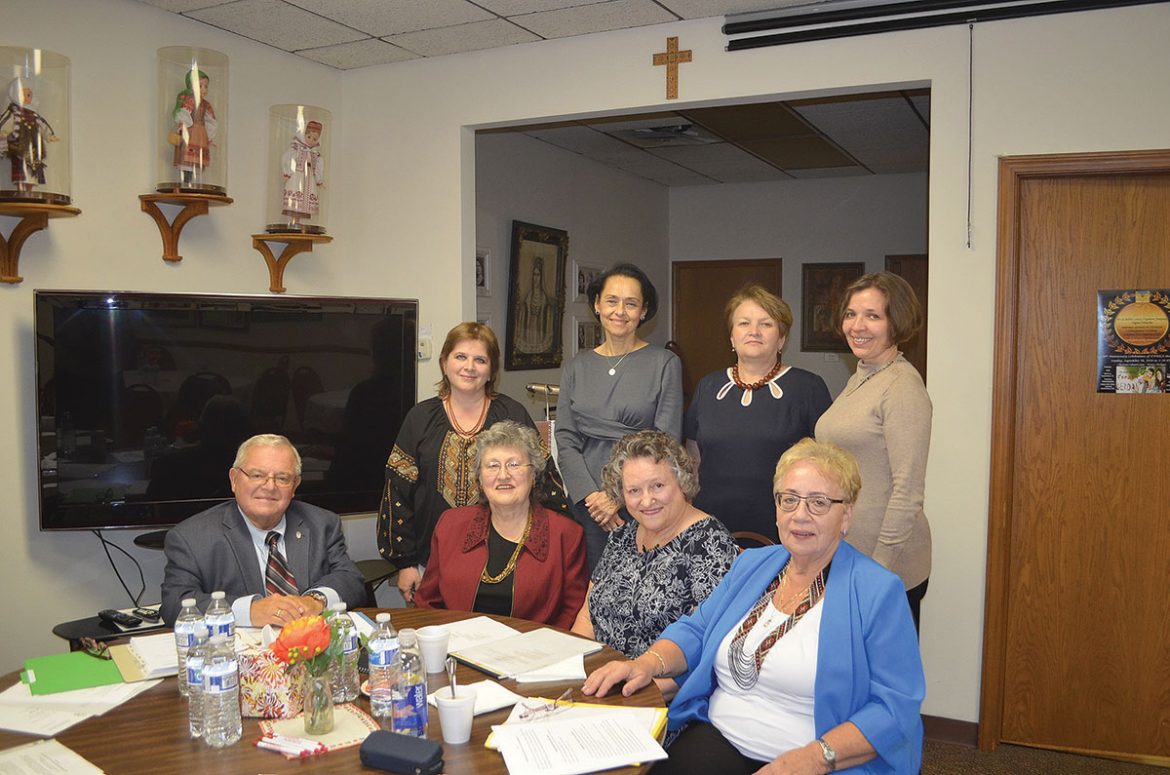 An exceptionally uplifting moment for all present was the honoring of Rafael Wenke, who received an honorary commendation in appreciation for his over 50 years of service to UMI. Prof. Wenke is one of the most senior members of UMI faculty, a distinguished professor of violin, a former UMI vice-president and former director of UMI’s Newark-Irvington branch. (Last year’s annual meeting in Philadelphia had honored one of the original founders of UMI, the legendary Ukrainian pianist Roman Sawycky Sr.). During two special workshop sessions, the teachers had the opportunity to share their pedagogical experience. They viewed with interest a photo display of a tableau highlighting the founding and development of the Detroit branch. A third session entailed an innovative theme, as Maria Hordynskyj-Holian, a piano teacher in the UMI Detroit branch who is also a registered occupational therapist with additional credentials in music therapy, presented an illustrated lecture titled “I see, I feel, I hear.” She discussed research by her and other scholars-practitioners in music education concerning problems in developing music performance technique; various digital, physiological and psychological characteristics of sound production; significance of piano hand placement and positioning, balanced posture and the utilization of interconnected musculature during piano performance. Concluding the convention events was a gala concert featuring solo, duo and chamber ensemble performances by students and teachers at the Ukrainian Cultural Center in Warren, Mich., where all were welcomed by Ms. Svytka of UMI Detroit. The standing-room-only audience heard works by Ukrainian and international composers. The performers included: pianists Andriy and Marta Nisevych, Veronica Shevchuk, Anna Toranchuk, Olya Chikh, Daniel Martynov, Andriy Pasichnyk, Mattei Jacks and Andriy Shturko; violinists Anna Toranchuk, Evelyn Chen, Christian Pakula, Іаn Cheng; faculty members Ms. Lonchyna-Lisowsky and Maria Hordynskyj-Holian (piano duet), Halyna Ishchuk (violin) and Halyna Yalovenko (piano), Lyubov Shesiuk (piano). Especially moving was the performance by Khrystyna Skochypets (voice) and Andriy Shturko (composer and accompanist), who premiered the latter’s song “Sons of the Maidan,” composed to a text by Lyubov Krasiy of Detroit.

At the conclusion of the concert, Father Dacechen expressed sincere appreciation to faculty members Ms. Lonchyna-Lisowsky, Miroslava Boryszczuk, Ms. Svytka, Ms. Yalovenko, Mr. Shesiuk and Halyna Ishchuk for putting so much professional leadership and dedication into preparing their talented students for this memorable concert. Ms. Maria Lonchyna-Lisowsky expressed special thanks to the convention organizing committee headed by Ms. Svytka and all the Detroit teachers for their assiduous work in preparing all aspects of the event.

The mission of UMI is to highlight music written by Ukrainian composers, in addition to traditional classical music. By following a multi-year, systematic curriculum of music education under the tutelage of accomplished and highly credentialed music professionals, UMI students can earn diplomas in various performance fields, as well as artists diplomas requiring a debut concert.

For further information about UMI music education programs in piano, violin, bandura, sopilka, accordion and voice performance, readers may contact Ms. Lonchyna-Lisowsky by e-mail at ukrmusinst@gmail.com, or by telephone at 248- 877-1816.

Elmira Romanyshyn is press secretary of the Ukrainian Music Institute of America.