She has served as director of the museum in Kyiv since 2008. In her first note as director, she wrote:  “Our museum is about people with big dreams – Ukrainian book publishers who worked under conditions that were sometimes not the most conducive.  These people brought us the past, present and future. This treasure we are studying and sharing with you.”

Supplementing her presentation with an abundance of slides, Ms. Bochkovska-Martynovych escorted her audience through a vivid history of the work of the Museum of Book and Printing in Ukraine from the inception of book publishing into a modern cultural venue.

The museum is situated in the old building of the  Kyiv-Pecherska Lavra Printing House. Last year, the museum celebrated 400 years since the inception of this printing house. It’s a remarkable phenomenon for Eastern Europe to have an operational printing house for 300 consecutive years – from 1616 to 1916, when its existence was disrupted by the Soviet authorities.

The salient point that Ukraine has always been a part of Europe is evidenced by the many printing centers in different cities and places of Ukraine in the 16th to 18th centuries, the quality and abundance of illustrations in the Ukrainian texts and the use of different languages as compared with the differences in Russian old printed books. 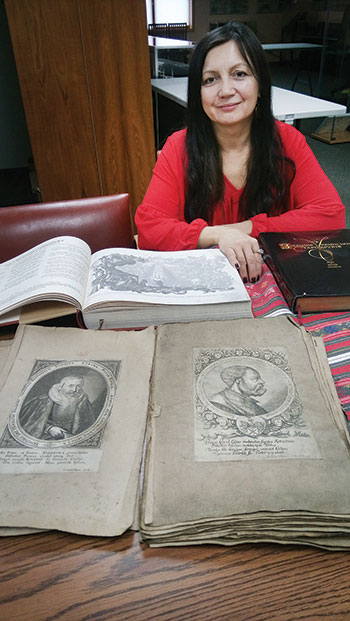 Valentyna Bochkovska-Martynovych, director of the Museum of Book and Printing of Ukraine.

Ms. Bochkovska-Martynovych showed slides with comparable illustrations of Ukrainian engraver Pamvo Berynda in Gospel Homiliary (Krylos, 1606) and the etchings of Albrecht Durer on the other hand; and she compared the Book of Hours (Venice, 1566) and the Аnthologion (Printing House of Kyiv Pecherska Lavra, 1619). The type and ornaments of Stryatyn and Kyiv-Pecherska Lavra Printing House are very similar to Venetian liturgical books and those of the Plantins. Even the history of architecture can be gleaned from the illustrations in the books, the speaker pointed out.

Regarding the Ukrainian book treasures in the unique collection of the Museum of Book and Printing of Ukraine, she also focused on the first printed books in Ukraine – Acts of the Apostles was published by Ivan Fedorov in Lviv in 1574 and the Bible published in the printing house of Prince Kostiantyn in Ostroh in 1581.

To showcase the recent scholarly and publishing accomplishments of the museum, Ms. Bochkovska-Martynovych displayed three books of which she is co-author with the vice-director, Lyudmyla Khaukha. Two of these – “Catalogue of Books of Pochayiv and Univ Printing Houses XVIII-XX Centuries from the Collection of the Museum of Book and Printing of Ukraine” (Kyiv, 2008) and the “Collection of Ukrainian Old Books XVI-XVIII Centuries” (Kyiv, 2012) – were presented to the Library of Congress, the Metropolitan Museum, Harvard University Library, Cambridge Library, and other centers of learning.

The “Collection of Ukrainian Old Books XVI-XVIII Centuries” (Kyiv, 2012), describes the private collection of Vitaliy Haiduk, a businessman and politician. This publication was awarded the grand prize of the Ukrainian competition “Best Book of Ukraine 2012.”

Ms. Bochkovska-Martynovych is the author of the project and compiler of  the facsimile edition of the book  “Historiae Biblicae Veteris et Novi Testamenti” (Augsburg, 1748-1757; Kyiv, Kalamar, 2015), which she presented to the Ukrainian National Museum in Chicago. The facsimile edition is supplemented with detailed scientific notes and commentaries with its translation from Latin to English and Ukrainian. The original copy is preserved in the Museum of Book and Printing of Ukraine. Additional copies are available in the Newberry Library in Chicago, the Art Institute of Chicago and the Metropolitan Museum in New York.

Ms. Bochkovska-Martynovych is currently in Chicago on a Fulbright scholarship to further her scholarly research and to learn the latest developments in the work of the curator, restoration techniques, concepts for exhibit presentations, scholarly interpretation and systematization of artifacts. Her project is “American Collections of Antique Ukrainian Books from the 16th-18th Century: Cataloguing, Conservation, Preservation of the Museum’s Collection in Emergencies, Exhibitions, Interpretation, Facsimile Editions – An American Experience for Ukrainian Practice.”

Her plans for the duration of the Fulbright award include travel to New York, Boston and Washington. Ms. Bochkovska-Martynovych will attend the American Alliance of Museum Conference on May 5-11 in St. Louis.

Previously she was in the U.S. on a leadership exchange program, “The Role of Museums in Defining National Identity,” for three weeks in 2009, when she visited the Smithsonian, Williamsburg, Mount Rushmore, Albany, New Orleans and an Indian Reservation in Rapid City, S.D. Upon her return to Ukraine, she organized a photo exhibit called “America with Love.” On display for three months, the exhibit then traveled to other cities, including Lviv, where “American Days” were held in September 2010.

These scholarly contacts enhance the generation of fresh ideas and a vision for the work ahead, manifestations of which are visible on site at the museum: for example, a hands-on illustration and design workshop while learning old printing techniques; a paper-making workshop while learning the history of paper. In 2010 Ms. Bochkovska organized the nationwide festival of Ukrainian books for children – “The Kingdom of Alphabetical Wizards and Angels,” which took place in the museum for four days. The seventh festival was staged in 2016.

Among the thousands of unique artifacts that the museum has in its collection are works of Vasyl Krychevsky, the graphic artist, film art consultant and painter who designed the 1918 Ukrainian coat of arms, state seal and banknotes. Krychevsky lived in Caracas, Venezuela, where he died in 1952.

Also on display at the museum are the original illustrations of the publishing house of Ivan Malkovych, A-BA-BA-HA-LA-MA-HA.

Since the reopening of the Museum of Book and Printing in 1975, 3.5 million visitors have walked through its doors.  The museum is located at Block 9/10-9, Lavrska Street, Kyiv, Ukraine  01015. Its website is found at: http://vuam.org.ua/uk/704:Музей_книги_і_друкарства_України; and its Facebook page at:  https://www.facebook.com/Books.and.Printing.Museum/?fref=ts.