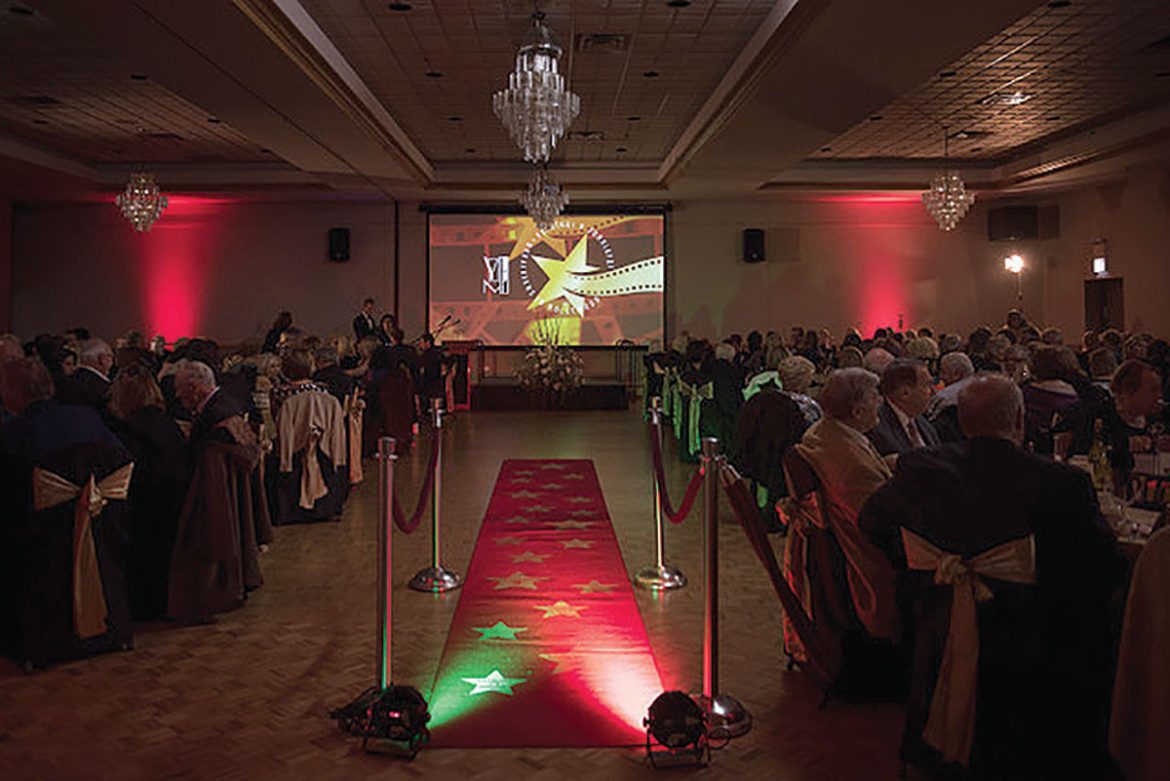 The star-studded red carpet and video presentation at the “Ukrainians in Hollywood” banquet held to benefit the Ukrainian National Museum in Chicago.

CHICAGO – Thinking of pulling your little ones out of Plast, SUM or ODUM for some lessons you think will help them “make it in the real world”? Questioning whether “Ukie school” is worth the Saturday traffic hassle? Forgoing another Ukrainian museum opening to watch another football game?

They flew into Chicago on October 20, 2018. The red carpet, spangled with golden stars bearing their names, was rolled out and ready. Shimmery satin sashes adorned each chair. Portraits of Ukrainian American Hollywood legends peered from each table’s centerpiece and from the video montage on the big screen.

From the moment they arrived, the guests of honor at the Ukrainian National Museum’s “Ukrainians in Hollywood” gala were embraced by both old friends and new fans vying for photos in front of the Oscars-worthy “step and repeat.” Lusia Strus, Halia Bahmet, Zorianna Kit and George Wyhinny were ready for their close-ups.

First to step into the spotlight was actor and producer Mr. Wyhinny, the MC who led the evening with tuxedoed sophistication. Fans may have seen him playing the tragic heart throb in “De Puta Madre,” or Officer Bradley in “The Affair.” But none were aware of the tattoo on the back of his arm: along the meridian lines of a compass, beside his beloved bicycles there rises a tryzub and a sheaf of wheat to “point me in the direction of my passions and my heritage.” 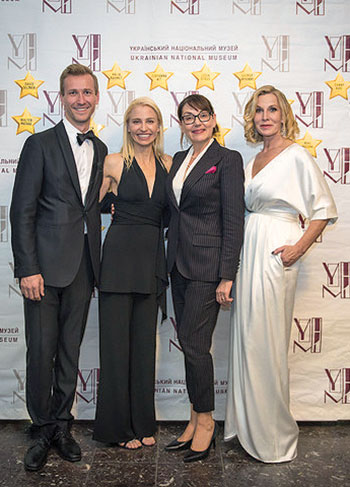 Guests of honor at the “Ukrainians in Hollywood” gala (from left): George Wyhinny, Zorianna Kit, Halia Bahmet and Lusia Strus.

One of those passions is educating the world about Ukraine’s tragically under-reported genocide of 1932-1933. Mr. Wyhinny has three projects in development that examine the Holodomor from diverse, revelatory angles. It was his true north that prepared him to pursue and land an interview with the Dalai Lama for his documentary “An Environmental Dialogue,” an honor few filmmakers can boast.

This feat required subtle, sensitive inter-cultural diplomacy – something Mr. Wyhinny has been practicing for quite some time.  “I remember memorizing and reciting all those patriotic songs and poems at Ukrainian school – and then trying to explain what they mean to non-Ukrainians, without boring or scaring anyone,” he said.

Even the athleticism that powers his bicycling passion was honed in the Ukrainian community – during his exhilarating years of Plast Ukrainian Scouting Organization’s camp excursions and Hromovytsia dance troupe tours. Of course, it wasn’t always easy to manage the gruelling itineraries, double identities and exacting parental oversight that a Ukrainian American childhood demanded.

He recalled: “My Grandmother was always cutting me off with: “Ya ne rozumiyu ti slova!” (I don’t understand those words), forcing me to repeat them in Ukrainian.” As a child, Mr. Wyhinny used to groan a lot (as you may hear your kids doing) but in the end, all that verbal stimulation enabled this internationally acclaimed producer to nimbly master and create films in three languages. He spoke two of them with grace and panache, as he introduced the other glamorous, accomplished guests.

The characters Ms. Strus portrays on TNT’s “Good Behavior” and “Claws” are impossible to forget – and so was her speech at the gala.

This award-winning actress recently finished shooting “Buffaloed” with Zoe Deutch and Judy Greer in Toronto, “The Descendants” in Los Angeles, then a promotional tour for NBC’s “New Amsterdam” in New York, before flying into Chicago just hours before the UNM rolled out the red carpet.

Where did Ms. Strus refine her talent while developing the discipline and art appreciation that such a successful Hollywood career demands? In Chicago’s Ukrainian Village, of course. The first time she revelled in the beauty of art was at the UNM – thanks to her Ridna Shkola teacher, who brought her to her first exhibit opening. It was in her mother’s kitchen and garden that Lusia’s appetite for beauty – both the light and darker sides – took root. And it was her mother’s selfless work ethic and unwavering support – starting with sewing that first angel costume – that fuelled her ambition and confidence.

Ms. Strus explained that anybody who meets her immediately learns two things: she’s from Chicago and she’s Ukrainian. Whenever she hears non-ethnic Americans reminisce about their years in band camp where they had to play music all day, she tops them by reporting she had to stand guard at the camp gateway during the graveyard shift. “Yep. I spent every summer in Baraboo, Wisc., at SUM [Ukrainian American Youth Association] Ukrainian youth camp. We wore uniforms, went on 18-mile paramilitary style marches in the dead of night, and reviled all things Soviet. I loved it!”

These experiences stay with you. They’re in you – the good, the bad and the complicated – making you stronger, more resilient and much less easily offended. Such grit is a prerequisite when choosing the life of a Hollywood performer. As is the capacity for utter exhilaration.

“I can tell you I’ve had dreams realized in my career – performing at The Royal Shakespeare Company in England, dancing on Broadway, acting alongside some of the biggest stars of our time – but I have never, ever felt again the pride, power and pure joy I felt when I was dancing and performing with Ukraina dance troupe,” Ms. Strus noted.

For all that she has enjoyed and accomplished, she thanked her mother, Evhenia. Her gratitude poured out with such humbled sincerity that many dinner guests felt compelled and completely comfortable approaching her for a chat and a selfie.

An Emmy-nominated costume designer, Ms. Bahmet works on one of TV’s most popular shows – NBC’s “This Is Us.” Although her official bio states that her career began at Paisley Park Studios where she worked for pop star Prince, she divulged that the seeds of her talent were planted right here in Chicago’s Ukrainian Village. “I remember my mother teaching me Ukrainian cross-stitch when I was 4 or 5. That’s when I caught the ‘textiles’ bug… it was central to my development as an artist, and am forever grateful to her.”

That bug accompanied her to ODUM [Ukrainian Democratic Youth Association] camp, where her father covered the largest table with a Zaporizhian Kozak Sich reconstruction, meticulously following the historical specs, and inspiring her to fall in love with it all – the crafts, the music and the camaraderie. “ODUM camp owns my heart and is where I had all my most important childhood experiences and memories,” Ms. Bahmet commented.

Ms. Bahmet, who just hobnobbed with the stars at the Vanity Fair pre-Emmy party last month, reminded the audience how easy it is to “lose oneself” in the cut-throat, narcissistic, transient Hollywood bubble, but assured us: “I don’t get lost in the fray nor the gloss of Hollywood, because I always know who I am. And I owe it to my ancestors to do my best – like they did.”

The designer’s daughter, who works with her on the set of “This Is Us,” shares her appreciation of traditional textiles, and finds entertainment value in watching her mother dance and sing folk songs around a table of beets, herrings and Old World elixirs with friends old and new. Ms. Bahmet says this type of insta-bonding is “impossible to explain to a non-Ukrainian”– suffice it to say: this is us.

Ms. Kit flashed a blockbuster smile as she told the story of how Hollywood lured her out of Canada and into U.S. citizenship. She got to work immediately as an entertainment industry journalist – a real life role she often gets asked to portray fictionally on the big and small screens, including in superhero epics like “Iron Man” starring Robert Downey Jr.

People often ask her how she honed the skills and confidence to take such a daring leap at such a young age. Ms. Kit credits her father and uncle, who were journalists and activists in Ottawa and Toronto, where the Ukrainian homeland was never very far from her consciousness. “While other kids were going to soccer practice on weekends, I headed out to the Soviet Embassy to protest the imprisonment of Ukrainian dissidents.”

Ms. Kit was expected to contribute her writing skills to Plast publications like Hotuys, so she was completely comfortable with assignments and deadlines by age 10. This Plast scout’s career choice was somewhat inevitable, so nobody was surprised to hear she had become an anchor at KTLA’s nightly news in Los Angeles. Later, as a member of the Broadcast Film Critics Association, she served as resident film analyst for the TV Guide Network, and as a movie reviewer on AMC’s “The Movie Club with John Ridley,” PBS’s “Just Seen It” and “Ebert and Roeper.”

But neither hectic schedule nor glamorous accomplishment could keep her from making time to work on the Holodomor, Ukraine’s genocide of 1932-1933. Ms. Kit is always prepared to give back, and to listen – as quite a few gala guests delightfully discovered. They were in awe of her inexhaustible curiosity and unflappable ability to push herself to new heights with each new project.

Yes, Zoriana’s parents pushed her; yes, she tried to resist – but today she is ebulliently grateful to them for helping build the bridge to her achievements, and to her diverse friendships across the global Ukrainian filmmaking community.

The gala’s final Hollywood greeting came from producer Iya Labunka, who was only able to join the audience on the big screen. All applauded Iya’s generous donation and precious gift, which the museum will feature in its immigrant exhibit: the memoir of her mother and Ukrainian Insurgent Army (UPA) heroine Maria Labunka titled “When the Forest Was Our Father.”

Warm greetings and heartfelt dedications bubbled over like the excellent champagne, imbuing the hall with an intimate, jovial vibe. The Hollywood visitors reported that they thoroughly enjoyed learning, dining, mingling, dancing, laughing and reconnecting. They’ve sent in these “thumbs up” reviews:

•  “Lydia Tkaczuk, who can rival many Hollywood producers I know, managed to put on a grand show with style and panache, but most importantly with a lot of heart. Sequel please!” – Ms. Kit.

•  “I felt like I came home – if my home was filled with hundreds of beautiful, welcoming, sincere, funny people supporting each other and a common cause.” – Ms. Strus.

•  “A spectacular event with all the razzle-dazzle one would expect from a star-studded event. I was thrilled and humbled to participate, reconnect with old friends and make new ones.” – Mr. Wyhinny.

•  “I was mesmerized by these thoughtful and exciting stories and achievements of my fellow speakers. I hope we’ve inspired continued support for the UNM, so it can continue preserving our heritage for future generations.” – Ms. Bahmet.

All of these community leaders delighted in the evening’s program, and expressed genuine gratitude to the UNM, for, as Mr. Bandriwsky pointed out, the real star of the evening was the museum itself.

The Ukrainian National Museum is the repository for the largest collection of Ukrainian immigration artifacts in the world, including both historic and folk art. It also exhibits the work of contemporary artists from all over the world.

None of these exhibits or events would be possible year after year, if it weren’t for the boundless dedication of the full-time staff and volunteer committee members who produced and promoted this glamorous gala.